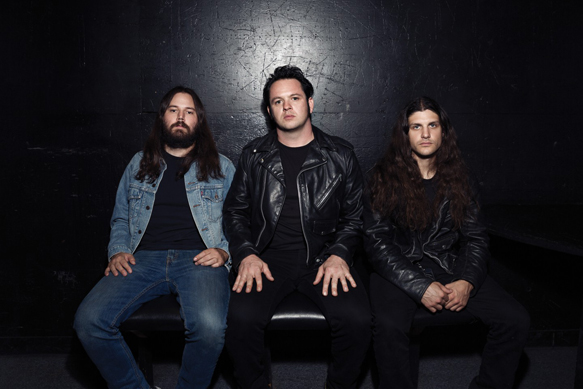 Ventura, California’s Night Demon play the kind of music one would expect based on their name and the over-the-top cover art on 2015 debut full-length album, Curse of the Damned. Featuring Jarvis Leatherby (vocals/bass), Brent Woodward (guitar), and Dustin Squires (drums), Night Demon wears their influences on their sleeve musically and aesthetically. The cover of Curse of the Damned features all of the elements relative to the genre; a masked man dressed all in black wielding an axe, a demonic horned goat, and an altar with two candles, a dagger, a skull, a chalice, and a Satanic Bible opened to a page with a pentagram on it.  Night Demon is written in Classic Death Metal font across the top, in red of course, with the album’s title printed neatly across the bottom in all caps. Looking like a record printed sometime around 1985, the band is not afraid to pay tribute to its influences when it comes to the music either. While early Iron Maiden, vintage Thrash act Venom, and Kill ‘Em All era Metallica are clearly the sounds the band members were reared on, they continually take those sounds and build on the basics with punchy melodies, sped up rockers, and simple, heavy riffing throughout. Covering eleven songs in just under forty-five minutes, Curse of the Damned is also the soundtrack to non-motion-picture graphic novel Blood Sacrifice, adding much intrigue to listeners.

Kicking off the album is “Screams in the Night,” letting the listener know that Demon Night came to rock, and rock hard. A thunderous riff introduces the listener to the band in an over-the-top manner as the guitars are immediately accompanied by classic Speed Metal drumming. Here the band lays down a perfect take on the New Wave of British Heavy Metal as the furious music is paired up with a strong, sing-along vocal, and in lieu of an intricate solo, the break features a slew of drawn out power chords. The title track is next and it begins with a heavy, plodding bass lick of Letherby. Dark guitars of Woodward join in for a sound that teeters on doom. As the song progresses, the band puts out a tune that would make the biggest arena Rock/Metal band proud as two verse/choruses are followed by an extended jam featuring expert soloing on guitar with the refrain thrown in every minute or so along with some backing “Ohhhhh, ohhhhh’s” before giving way to more pounding solos. At five minutes, this is one of the longer tracks on the album.

Titled simply “Satan,” Night Demon churns out a Thrash masterpiece about one of the genre’s favorite subjects as the main riff is speedy and repetitive in classic Thrash form. They lyrics are so straightforward, they border on camp, and take on a Spinal Tap feel, as Leatherby sings about, “inverted crosses,” “fallen angels,” and the refrain is, “His name is Satan/he rules the underworld/his name is Satan/he’s coming for your soul.” It is impossible to tell if they are serious or if their tongues are buried deep in their cheeks, but either way, it makes for an excellent straight ahead rocker. Next, “Full Speed Ahead” lives up to its title as the band goes all out for a shade under three minutes in a classic Speed Metal manner, evoking Black Sabbath’s “Paranoid” as the track never takes a second to break or even hint at a break in the pace.

Every great Metal album must have its sprawling, epic track, and for Night Demon that song is “The Howling Man.” It is a plodding, slow burn. Guitars builds and escalate until finally giving way to sped up guitars which then alternate between a classic Heavy Metal anthem and the closest thing Metal bands come to as far as a ballad with slowed down bass and drums soaring, along with looping guitars. Coming in at just under seven minutes, here Night Demon takes a stab, and hits the mark, on the Heavy Metal genre’s equivalent of a power ballad. Just like “Satan,” “Heavy Metal Heat” makes the listener wonder if the band is paying tribute to their forefathers or poking fun at them, or even at themselves as Leatherby screams, “Friday night/get your tickets to the show/It’s been one hell of a week………/don’t let the man get you down/fight back have no fear/you’re the toughest one around”. Either way, it makes for an incredibly fun three minutes.

“Run For Your Life” and “Killer” find Night Demon channeling Thin Lizzy and early Metallica, respectively. “Run For Your Life” finds Leatherby telling a tale of despair, expertly, over a perfect Classic Rock sounding lead from Woodward, while Squires provides a solid rhythm on the skins and hits the cymbals sparingly, but always at the right time. In the spirit of the Classic Rock greats, Night Demon provides a heavy, yet non-threatening track that you can both sing along to and play plenty of air guitar. “Killer” features the heaviest guitar work on Curse of the Damned with a punchy, distorted riff, along with brief, blistering solos, and sped up drumming that, if extended by a few minutes, would fit right in on pre-1991’s Black Album era Metallica. Album closer “Save Me Now” finds Night Demon taking on yet another style of Rock/Hard Rock/Heavy Metal as the song would have probably been in heavy rotation on MTV in the mid to late 1980s when so-called hair bands like Warrant, L.A. Guns, Slaughter, Dokken, and company cranked out medium paced rockers heavy on the vocal harmonies. Although the song may seem out of place on the album, it is sequenced perfectly as the closer, as prior to that, the band had covered every Hard Rock/Metal sound from its inception to the early ’80s Thrash Metal scene.

Those looking for a heavy, yet not heavy-handed good time featuring all the sounds that have come down through the years on the Rock scene, Curse of the Damned is for them. Night Demon are clearly influenced by the greats that have come before them such as Black Sabbath, Thin Lizzy, Venom, Metallica, Judas Priest, Iron Maiden, and KISS, but rather than pay tribute by copying them, they have created a sound that manages to blend the influences. While these acts are all part of the history of the genre, they are all quite different as each has, over the years, put their own stamp and twist on Rock. Night Demon manages to blend these influences expertly for a sound that manages to be both derivative and unique at the same time. No small feat, and why CrypticRock gives Curse of the Damned 4 out of 5 stars. 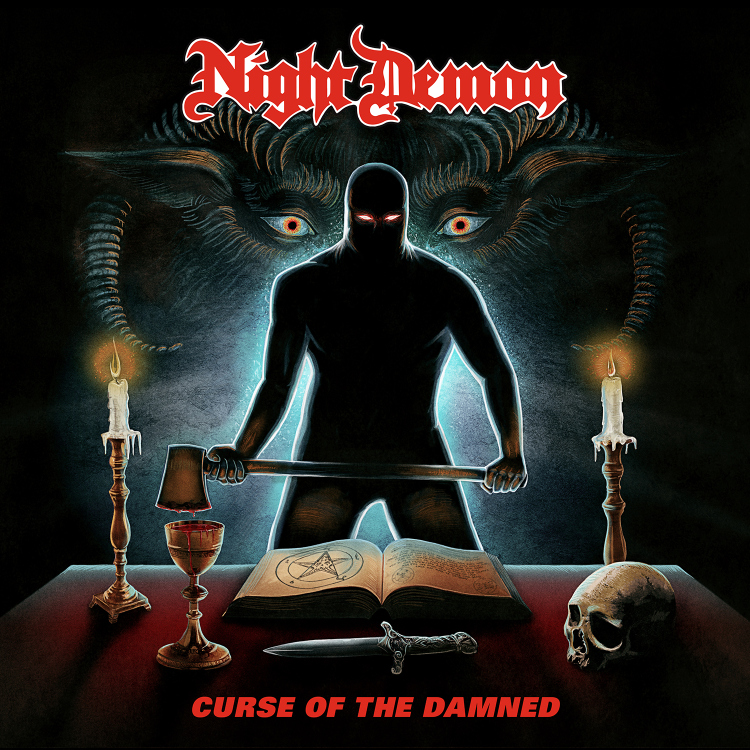