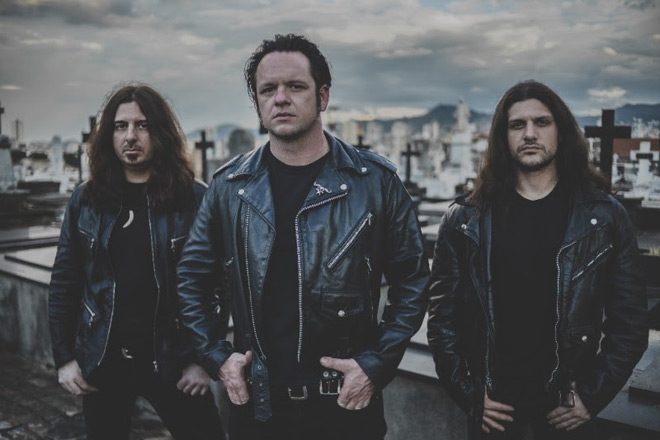 Relentless New wave of British Heavy Metal styled Californian trio Night Demon are galloping faster than the speed of light through the dark forest as they prepare to unleash their shiny, new album Darkness Remains. A fairly new addition to the world of Heavy Metal, with their origin dating back to 2012, their debut full-length, 2015’s Curse of the Damned showed these dudes are burning in hell in the best way possible, making purgatory like an amusement park vacation. In fact, they probably could be held accountable for creating the very flames hell has thrived on based on Darkness Remains alone.

Released on Friday, April 21st via Century Media, the geniuses behind Night Demon’s sophomore album is Vocalist/Bassist Jarvis Leatherby, Guitarist Armond John Anthony, and Drummer Dusty Squires. A total of ten main tracks, with two bonus covers, there is also a limited edition LP available, which is recommended to jump on as quickly as possible because once Darkness Remains gets around, there will be a mad dash for the keepsake vinyl.

Onto the music, first of all, is an excellent depiction of what is so special about Night Demon. A mesh of styles, even though Power Metal is apparent there are also Classic Rock and New Wave of British Heavy Metal influences spread throughout the album, including that of Deep Purple and Iron Maiden. That said, it also roots itself subtly in a very dark and mysterious place. The mix of these elements in this specific concoction brewed precisely to any true fan’s liking are the mold that will break history.

On first listen, one can expect to be absolutely blown away on the technicalities at play – from the fantastically crafted guitar work, to the drumming that will leave burn marks in the pavement, to the vocals that blend in phenomenally. Then there is the so-called darkness, and it is just the right amount to push the otherwise classically rooted songs into present day. As stated, the guitar play on every single track is brilliantly executed while the entire album goes above and beyond any expectation.

In no particular order, the songs of Darkness Remains are all worthy of a lengthy discussion, yet they work together so well as a collective entity that it becomes difficult to break it all down. Basically, there are quite a few tracks that seem to be reminiscent of a classical hit, but they are crafted, manipulated, and reworked in such a way that the music is seemingly ahead of its time. Oddly, only because Leatherby’s voice is such a strong and noble part of Night Demon, the hands down most amazing track on the album is the instrumental “Flight Of The Manticore.” Just when it is thought that it could not possibly get better, it does, to the point heads could very well implode from the overload of sheer technical progress. Then there is the cut “Black Widow,” which seems to possess the most marketable characteristics, yet it still remains unique and futurebound.

All this said, there is no way to listen to this album while standing still, especially when tuning into “Life On The Run,” which is a literal journey through a technically advanced mind of madness. As stated, strong start to finish, the weakest link at play seems to be “On Your Own,” but even still, it is masterful in its own right and beautifully written in spite of its popular nature. Then, the tune “Stranger In The Room” sails away with all the brilliance of a good power ballad, definitely riding uncharted territory in all its raw exposure and honesty.

Furthermore, the title-track is a dark echoey vocal driven piece with a heartfelt vibe and a crystal clear guitar tone. It serves as a nice change of pace to the more speed-driven style of Night Demon. There are also some new age Jimi Hendrix type guitar riffs happening throughout Darkness Remains. This is not to say they sound like Hendrix, but that the qualities the guitar riffs posses put them at a highly creative level, which is not only exciting, but extremely refreshing.

There simply are not enough positive words out there to express all of the joy Darkness Remains will brings Heavy Metal lovers. As a cohesive piece of work, it is an exciting chunk of the future of Heavy Metal ready and willing for the taking. Without further worthy praise, CrypticRock gives Night Demon’s Darkness Remains a 5 out of 5 stars. 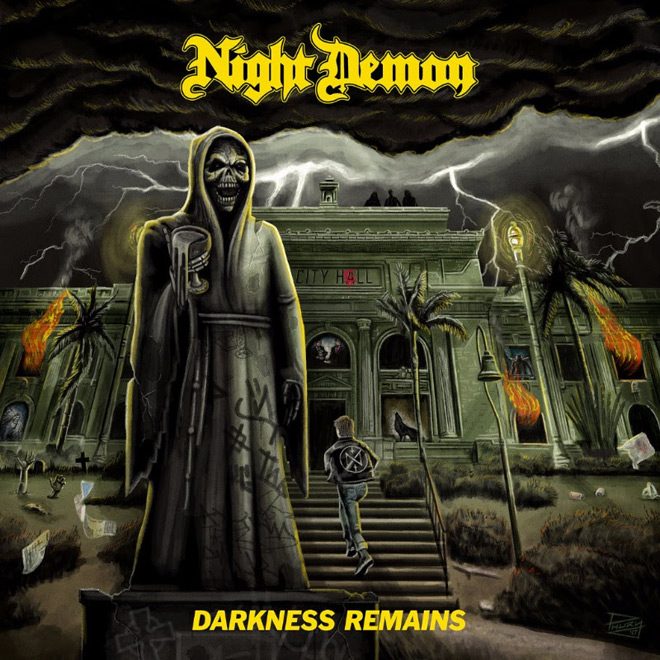