Night of the Slasher (Movie Review)

Ever wonder what happens to the Final Girl after she has survived her Horror movie ordeal? Scarred, battered, broken, and depressed after going to the funerals of all of her murdered friends, she must go on with her life, even if the killer is still out there. What is a girl to do? Sit around and wait for him to come back and finish the job?

Night of the Slasher, the newest short by director Shant Hamassian (The Slowww Zombie 2006, A Really Nice Guy 2013) answers those questions and more in a film that, in one long, action packed take, takes the definition of “closure” to a whole new level. This twelve minute long short is both an homage to the silent, knife-wielding Slasher as well as a love song to the girl who manages to survive the maniac’s razor sharp blade. Produced by Hamassian, Adam Lesar (Bicycle Dreams 2012, Dale’s Big Date 2015), and Eve Constance (The Audition 2014, The Coed and the Zombie Stoner 2014), the film rocks to music by Simon Michel and a kickass screenplay written by Hamassian himself. Night of the Slasher stars producer Lesar, Lily Berlina (108 Stitches 2014, Just Before I Go 2014), and Scott Javore (The Alumni Chapter 2011, Dale’s Big Date 2015).

Shot in one take, the film starts out with a beautiful, yet scarred teenage girl, Jenelle (Berlina), stripping off her clothes and dancing seductively to “Dying for Love” by Grayce, a throwback to the hair band songs of the ’80s. She answers a knock at her front door, but first wraps a scarf around her recently stitched throat and invites in a rather prudish, booze carrying young man (Javore). Without a word, she chugs the first three beers, to his jaw-dropping astonishment, before grabbing the last, untouched bottle right out of his hand and downing it. As he picks up the empty glass bottles, Jenelle flips open a little notebook that says, “Horror Movie Sins: 1. Dance half naked 2. Drink beers 3. Do drugs 4. Have sex.” She checks off numbers one and two before inviting her date to smoke a joint with her – he declines – and then proceeds to jump his bones right there on the couch. The completion of the fourth Horror Movie Sin triggers the Slasher, who shows up in a Dr. Spock mask – an awesome nod to the Captain Kirk mask that was used for Michael Myers in Halloween (1978) – and immediately starts stabbing Jenelle’s date. Thrilled that she finally lured out the psycho who gave her the initial slashed throat, Jenelle uses everything in the Final Girl arsenal to get her revenge on this indestructible masked maniac. 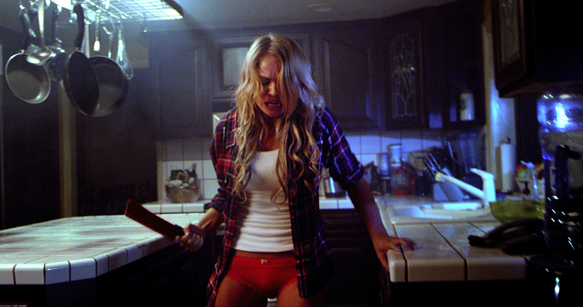 Night of the Slasher is a fantastic little short that fans of both the Slasher genre and Horror fans at large will love. There is never a dull moment – not a second is wasted – as Jenelle puts her vengeful plan into action. From the Scream-like Horror movie tropes to the physics breaking, omnipresent killer, who, even after being beheaded, still lives, this film is full of jokes that every genre fan can appreciate. After playing at over one hundred and ten festivals (including SXSW later in March of 2016) and winning more than thirty awards, Night of the Slasher is to compete in two Oscar qualifying festivals: the St. Louis International Film Festival in Missouri and the Foyle Film Festival in Ireland, both taking place in November of 2016, and should it win, will become eligible for an Oscar nomination. Horror Freak News has even voted it the #1 Horror Short of 2015. Look for more from Hamassian and Lesar as they plan to turn Night of the Slasher into a feature length film, one many will be pumped up to see. CrypticRock gives Night of the Slasher 5 out of 5 stars. 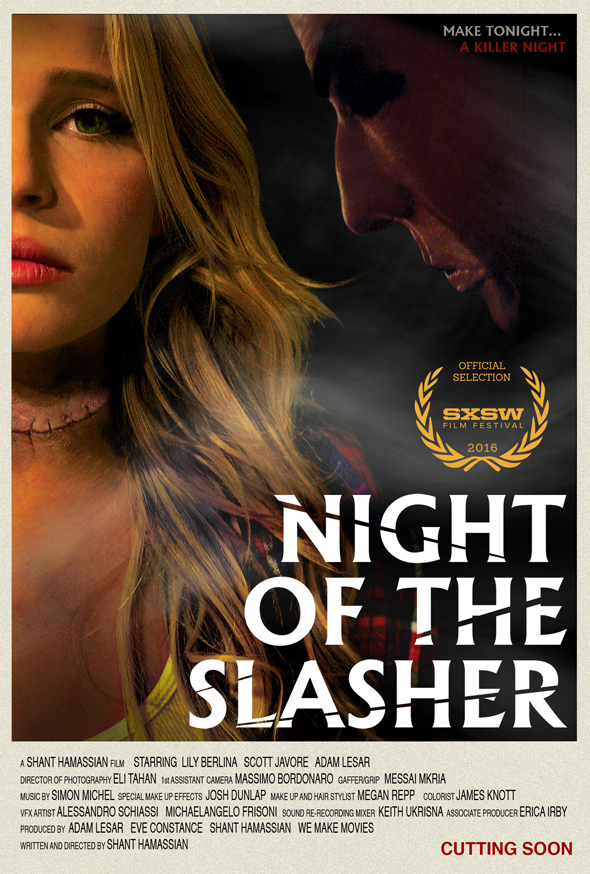