Released three years after the original A Nightmare on Elm Street, the second, and arguably best, sequel, Dream Warriors hit theaters on Friday, February 27th of 1987. Breaking away from the storyline laid out by 1985’s A Nightmare on Elm Street 2: Freddy’s Revenge, returning for the new film was Robert Englund as murderous dream stalker Freddy Krueger, Heather Langenkamp (A Nightmare On Elm Street 1984, Just the Ten of Us series) reprising the role of his original nemesis, Nancy, and John Saxon (Enter the Dragon 1973, Cannibal Apocalypse 1980) as her father Thompson. 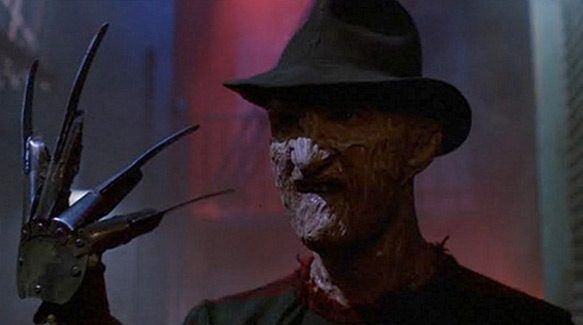 Taking A Nightmare on Elm Street to a new level, Dream Warriors would also introduce a compelling psychricatic ward group of teeangers including Patricia Arquette (True Romance 1993, Lost Highway 1997) as Kristen Parker, Ken Sagoes (A Nightmare on Elm Street 4: The Dream Master 1988, Rosewood 1997) as Kincaid, Rodney Eastman (A Nightmare on Elm Street 4: The Dream Master 1988, Mobsters 1991) as Joey, Jennifer Rubin (Bad Dreams 1988, Screamers 1995) as Taryn, Bradley Gregg (Stand By Me 1986, Indiana Jones and the Last Crusade 1989), Ira Heiden (Elvira: Mistress of the Dark 1988, Father of the Bride 1991) as Will, Penelope Sudrow (Dead Man Walking 1988, After Midnight 1989) as Jennifer, along with Craig Wasson (The Boys In Company C 1978, Body Double 1984) as Dr. Neil Gordon, and Laurence Fishburne (Event Horizon 1997, The Matrix 1999) as ward ordeal Max.

By 1987, Freddy Krueger was a white-hot commodity and the money train was rolling full speed ahead. Original creator, Wes Craven, saw the original A Nightmare On Elm Street as a one-off, but was brought back in for Dream Warriors. His intent was for this to be the final Nightmare, wrapping the franchise up as a neat little trilogy.

The funny thing in all of this is that the first draft for Nightmare on Elm Street 3 did not even involve the Dream Warriors. New Line Cinema rejected the concept at the time, but Craven’s first draft actually resurfaced years later in 1994’s A New Nightmare when Freddy invades the real world haunting the actors. As a result, Bruce Wagner (I’m Losing You 1998, Maps To The Stars 2014), Frank Darabont (The Shawshank Redemption 1994, The Green Mile 1999), and Writer/Director Chuck Russell (The Mask 1994, Eraser 1996) collaborated, eventually getting around to the inclusion of the Dream Warriors.

While the core of the drafts remain on screen, A Nightmare On Elm Street 3: Dream Warriors was vastly different. Aside from small differences like characters names and such, this script also showed a ranch house where Freddy Krueger was born, and it is the house that shows up in the children’s dreams rather than the Elm Street house. Also, a very interesting difference is that Lt. Donald Thompson knows from the start that Freddy Krueger is real and still alive. Here, Lt. Thompson had been missing and Nancy was intent on finding him. When she does, Nancy learns that he was obsessed with finding the Krueger house and burning it down. 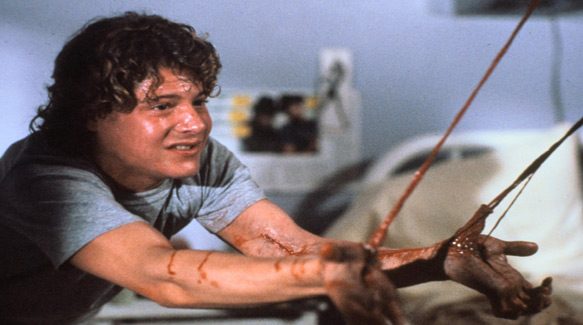 Additionally, while the sexual tension between Dr. Neil Gordon and Nancy is alluded to on screen, it is never brought to fruition. However, in the original script, their romance is more pronounced and they eventually do get together. There is also no talk of Krueger’s mother having been a nun or Freddy being “the bastard son of a hundred maniacs,” and both Joey and Kincaid are snuffed out. The deaths in this script were much more grotesque, with Freddy Krueger not as talkative and more vulgar. In the end, Freddy Krueger is killed by Nancy by using his own glove, not by holy water.

Alternative script aside, the A Nightmare on Elm Street 3: Dream Warriors that was made, has become a piece of ’80s Horror gold. All this in mind, if Nancy and Lt. Thompson’s characters would have been replaced by other actors, it would have been a lazy effort and made the film not nearly as believable. Nancy is now older and wiser, but when she is brought into Kristen’s dream and sees her old nemesis, the look of fear on her face makes her seem like the scared teenager she once was.

On the other hand, her father, Lt. Thompson, is no longer on the police force. Nancy and Neil happen upon him in a bar, and while he wears a badge, his patches say “security.” It appears he has lost everything in the wake of the events that unfolded in the original A Nightmare on Elm Street, and is now a miserable, regretful, drunk, only too late does he realize that Nancy was right all along.

As for the other characters, Wasson’s Dr. Neil Gordon is a well-meaning psychologist grounded in reality and science, but when he encounters the ghostly Sister Mary Helena (Nan Martin: All of Me 1984, The Drew Carey Show series), who turns out to be Amanda Krueger, Freddy’s mother, he begins to take certain things on faith. As for the motley Dream Warriors, Kincaid (Sagoes) is the “big, tough, badass,” who’s dream powers were super strength, the “beautiful and bad” Taryn (Rubin) is good with knives and confident, a wheelchair bound Will (Heiden) is able to walk in his dreams and is the “Wizard Master.” Then there is Joey (Eastman) who was mute in real life, but in dreams has the ability to talk and unleash a sonic scream, and finally, lead character, Kristen Parker (Arquette) is a tough gymnast and able to pull people from reality into her dreams.

All exciting characters made for ’80s Horror film consumption, Kristen Parker was the deepest character of all the children. At the beginning, she tries to save the Little Girl (Kristen Clayton: The Hidden 1987, A Nightmare on Elm Street IV: The Dream Master 1988) from Freddy, only to find what she is holding is a corpse. It is really a metaphor for her character; a frightened little girl with no one to save her. Enter Nancy. They bond quickly when Kristen pulls Nancy into her dream with the Freddy Worm and Nancy saves her. 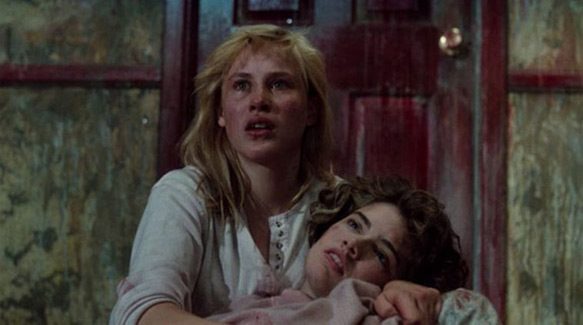 The two’s relationship is a special one because, even though Nancy is not much older, Kristen looks upon her as a daughter would look upon a loving mother. Kristen’s own mother is completely self-absorbed, not even care about her daughter enough to talk about her nightmares.

Nancy was the first person to believe Kristen when she was at her lowest point when she was being admitted to Westin Hills Psychiatric Hospital, surrounded by strange faces wanting to sedate her. Nancy pulls her back from the edge by finishing the Freddy Nursery Rhyme, thereby validating Kristen’s sanity. Their relationship comes to a heartbreaking end when Nancy dies with Kristen cradling her, promising to “dream you into a beautiful dream forever and ever.” This was the first, and unfortunately, last time a truly meaningful and believable bond between characters was formed.

Anchored by a strong story with strong characters, additionally, Dream Warriors featured some of the most inspired special FX of the series. With Mark Shostrom (Evil Dead II 1987, Phantasm II 1988) and “Screaming Mad” George (Bride of Re-Animator 1989, Society 1989) on board, it was bound to be a tour de force of horrific creations. The FX were simply masterful and unique, especially when Freddy comes out of the TV and his arms are wires and tubes and his head has the “bunny-ear” antennas that are moving; it is one of the best kills in the franchise with the best line.

Also, Phillip’s death is probably the most graphic of Dream Warriors, when his tendons are ripped out of his arms and legs and he is puppeteered by Freddy like a macabre Pinocchio. Meanwhile, Taryn’s death may have been the most creative with her heroin addiction being the focal point. When Freddy’s fingers turn into syringes, the track marks on her arm come to life like baby birds ready for food, which was both realistic and a disturbing look at heroin addiction. There was also a chest prosthetic worn by Englund that shows the souls of the children trapped inside of him, screaming. Interestingly enough, it looked like a precursor to the shunting scene in 1989 Society, on which Screaming Mad George was responsible for the special FX.

Then there is the gigantic “Freddy Worm” that was sucking Kristen down its gullet was originally the same color palette as Freddy. In the end, it was deemed too phallic, so they had to paint it that dark green color, which makes it look a lot better. Also, the part where Kristen was getting eaten was shot in reverse because, the worm’s teeth were so soft, they were bending inward when shot normally.

Besides great special FX, Shostrom is known for his jokes and pranks. It is said at the end of production on Dream Warriors, Freddy’s glove disappeared and magically reappeared in the work shed on the set of 1987’s Evil Dead II, on which Shostrom was the main FX man, but maybe it was all just a coincidence. 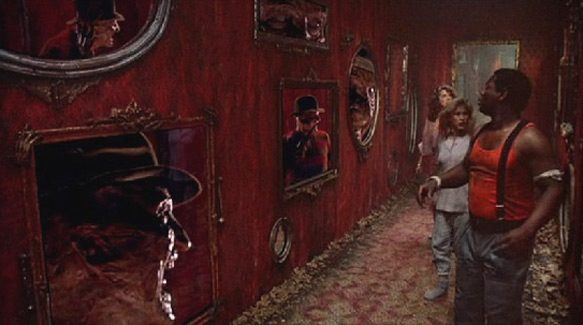 A film with so much to reflect on, A Nightmare On Elm Street 3: Dream Warriors still holds up with some of the best and most memorable kills and FX of the entire franchise, strong and likable characters, and fun story. It was hip, modern, and clever, interjecting original music; ’80s Metal juggernauts Dokken, ala “Into The Fire” and theme track “Dream Warriors.”

This marketing scheme would bring Freddy Krueger into his first ever music video, starring as himself in Dokken’s “Dream Warriors” with Lead Singer Don Dokken fighting off the dreamkiller with his voice and lead shredder George Lynch with his guitar solo, simply classic. 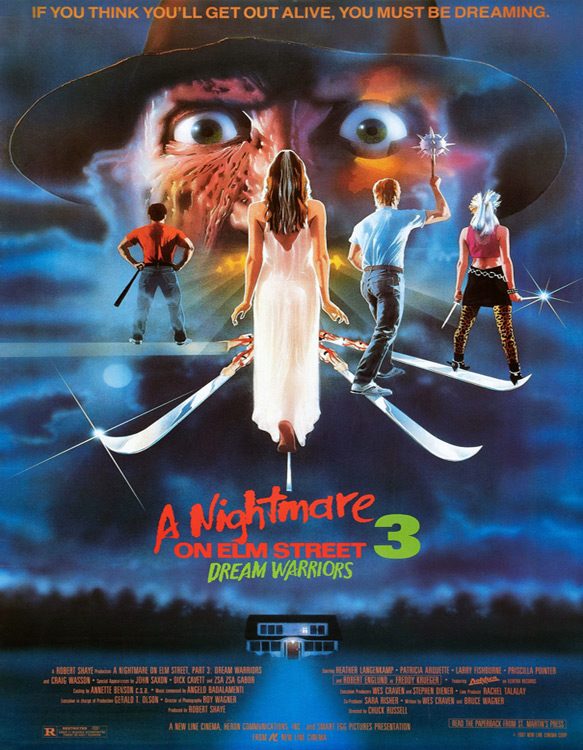 Norah Jones – I Dream of Christmas (Album Review) At The Gates – The Nightmare Of Being (Album Review)
Like the in-depth, diverse coverage of Cryptic Rock? Help us in support to keep the magazine going strong for years to come with a small donation.