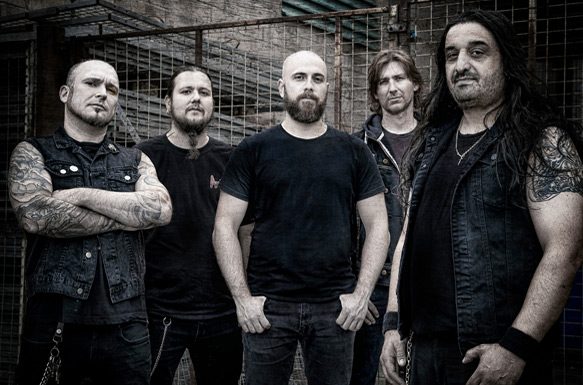 Begun as a duo back in 2000 in Thessaloniki, Greece by Guitarist/Songwriter Marios Iliopoulos (formerly of Exhumation) and Guitarist Kostantinos Karamitroudis, aka Gus G., Nightrage was born. Relocating the project to Gothenburg, Sweden,they commence to creating their own unique brand of Melodic Death Metal.

Now with seventeen years of history behind them, Nightrage’s story continues to be forged as they prepare to release their seventh album, The Venomous, on March 31st. Their second album in two years with Sweden’s Despotz Records, The Venomous follows the rejuvenated energy Nightrage found with the aforementioned The Puritan.

Far from a simple record, The Venomous follows a concept of death, turmoil, and self-blame while using brutality plus melodies with aggressive riffs as well as screaming vocals to spin a story of extinction. Shedding more light onto the tale, Iliopoulos states, “The lyrics for The Venomous depicts the demon Marchosias as the true goddess of our demise, and how we blindly follow here. In plain words, Marchosias = vanity, envy, hate and all the other shit that we as a cancer to this world bring along. Or it can mean exactly what you want, as long as it touches something in you!”

Keeping with this theme, the cover artwork presents a blindfolded angelic figure in grayscale with a crown in one hand and a sword through the other as a snake restricts her. The only colors highlighting this scene are a golden yellow and blood red.

As for the music itself, the twelve track offer begins with the steady creeping guitar of the title track. Released as a single, until the actual vocals enter, this could be confused as any other modern Rock song with its catchy tones. Although, once Nyman comes in, it makes a swift change, unveiling the intense layering of instrumentals and growling verse. Through it all, there is an unnerving feeling of lost freedoms and the realization that there are still great opportunities that must be fought for.

Setting the stage for “Metamorphosis/Day of Wrath,” there is a sudden drop into the heavy tune which is expertly overlaid with serious guitar riffs and deep screams. Then, “In Abhorrence” offers a rapid, slamming, hate-filled beat with a superb guitar solo in the middle showcasing insane amounts of talent and a disdain for one’s self and everything else around them. This is before the steady-paced “Affliction,” filled with catchy refrain before the anthemic “Catharsis” brings a high energy verse, alternating the pace between solos and choruses.

Acting as the midpoint of the album, “Bemoan” drives home the realization that one’s worst enemy is themselves and hatred and destruction are a result of personal failings. A telling epiphany, The Venomous continues with the thrashing beat of “The Blood;”a tale of lies, lust, and suffering. This is before “Disturbia” describes denial as a blindness and mistake causing loss where unnecessary.

Offering a bit of a change in tone, “Desolation and Dismay” is seemingly upbeat at first, but slips into a sense of misery and the struggle to survive as it charges on. A powerful track, it is a call to find one’s own freedom against bleak odds. An emotional ride, the finale piece comes in the form of instrumental composition “Denial of the Soul.” Mournful in tone, it leaves a reminder that turmoil still lies underneath. Inevitably, this closing pulls together the overall message of The Venomous, leaving a feeling of trying to rise, even as obstacles may be pulling us downwards.

Using the demon Marchosias as inspiration, Nightrage creates an image of demise brought by internal conflict. Overall, the band genuinely conveyed the senselessness of the world due to the selfishness of people. The tracks themselves flow together, creating an environment of solitude, and while The Venomous may be a bit different than others in the genre, Nightrage’s unique take is what helps them stand above the crowd. Impressing their dedicated followers and garnering interest from those who typically would not find this genre of interest, Nightrage delivers a passionate new album with The Venomous. That is why CrypticRock gives this album 4.5 of 5 stars. 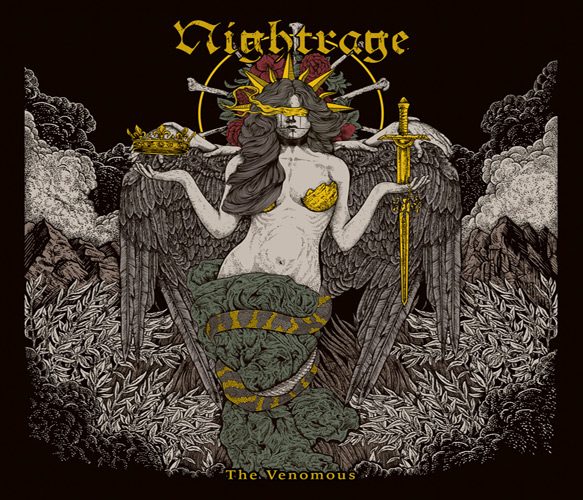