When it comes to solicitors, Hunter S. Thompson said it best in his early 1960s novel, The Rum Diary, when he wrote, “I harbor a secret urge to whack a salesman in the face, crack his teeth, and put red bumps around his eyes.” With that said, there are probably a plethora of people who could not agree more with those very same sentiments, as having uninvited salespeople showing up on your doorstep and trying to hustle their way into your home just to sell you a product you neither want nor need can be both frustrating and maddening. In a beautiful, upscale, picturesque suburban neighborhood, there is one particular door that a solicitor will deeply regret ever having knocked on. 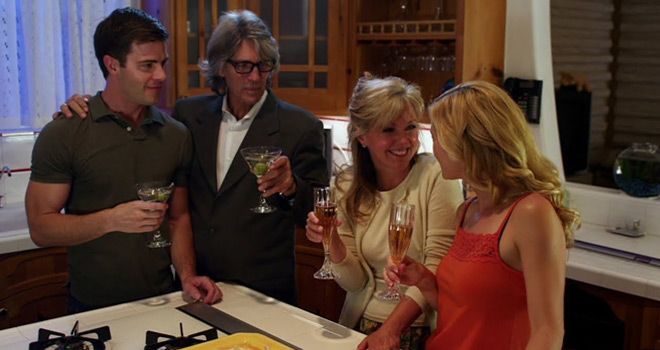 No Solicitors is the fun and cheesy Indie Horror/Comedy that was released on DVD January 2, 2018 via Cinedigm, and can also be found on Amazon. It was written and directed by John Callas (Lone Wolf 1988, Bobby’s World series), and included an entertaining cast that featured classic ’80s Horror film stars.

With an exciting cast of who’s who in the Horror genre, the story of No Solicitors revolves around Dr. Lewis Cutterman (Roberts), who is a brain surgeon with a private practice that he works at with his assisting nurse and wife, Rachel (Randolph). They have two very privileged, spoiled, and childishly immature [adult] children, Nicole (Poirier) and Scott (Maxim). They live in a beautiful mansion located in an affluent suburban neighborhood that screams “The American Dream.” Placed just above the doorbell of this magnificent home, reads a sign that clearly states, “No Solicitors.” Unfortunately, for solicitors, they either fail to acknowledge the sign altogether, or they simply deem it more of an innocuous suggestion than the actual warning/threat it should be treated as. 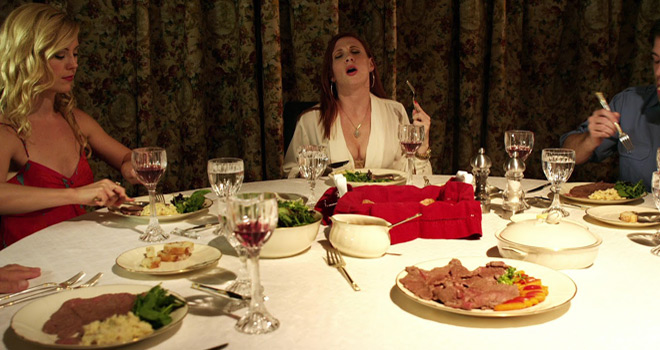 It is not uncommon for families to strive to live like the perfect, wholesome American families they grew up watching on TV; such as The Cleavers (Leave it to Beaver), The Bradys (The Brady Bunch), or even The Tanners (Full House). The Cuttermans though, they live more like they have been caught in a crossover that has merged the strong family ties and respectability of The Cleavers with the brutal appetite and penchant for murder of The Sawyers (The Texas Chainsaw Massacre); think Ed Gein living in Mr. Rogers Neighborhood.

They are an interesting family, to say the least, but their prim and proper way of life, unconditional love and support for one another, and cheesy, over-the-top family dynamic coupled with their greed, gluttony, and vile business ventures make for a tale that truly puts the “fun” in “dysfunctional.”

No Solicitors is certainly not a film without faults, but its negligible imperfections were in no way enough to diminish its positive features, which really kept viewers glued to the screen and enjoying each and every ridiculous minute of it. The dialogue was shallow, facile, and filled with some of the most simplistic sarcasm, witless banter, and punny foolishness ever; which some viewers may consequently find to be one of the film’s shortcomings, while others may believe it to be one of its more comical components. 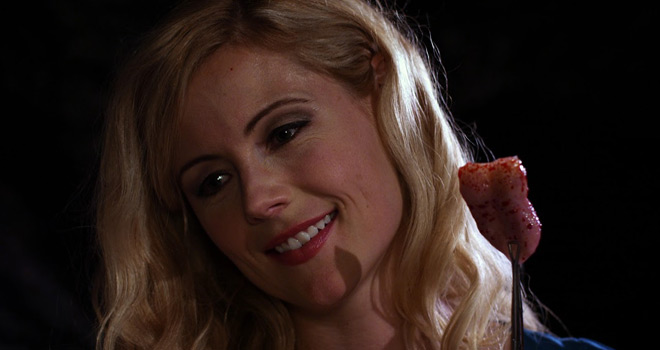 Aside from clueless conversations, the interactions between characters were just as amusing, what with tense moments being so senselessly trivialized that viewers could not help but laugh. The actors and actresses did a really good job with their appropriately exaggerated performances, and the Leave it to Beaver-inspired score really aided in the success of that. Plus, the pacing worked out well for the story as well.

The gore is another area where there could be conflicting opinions on how it was handled, mainly because there were moments where the special effects were really hit or miss. Some medical procedural shots and torture shots were done believably well and really hit the mark on the FX, while others came off as amateur hour – with special regards to the blood, which was the biggest inconsistency. That said, this film contained very graphic gore, so viewers may not want to include this in their Dinner Theater Collection. Essentially, No Solicitors is basically a Low-Budget B-Horror with a B+ Rating, which is why CrypticRock gives it 3.5 out of 5 stars. 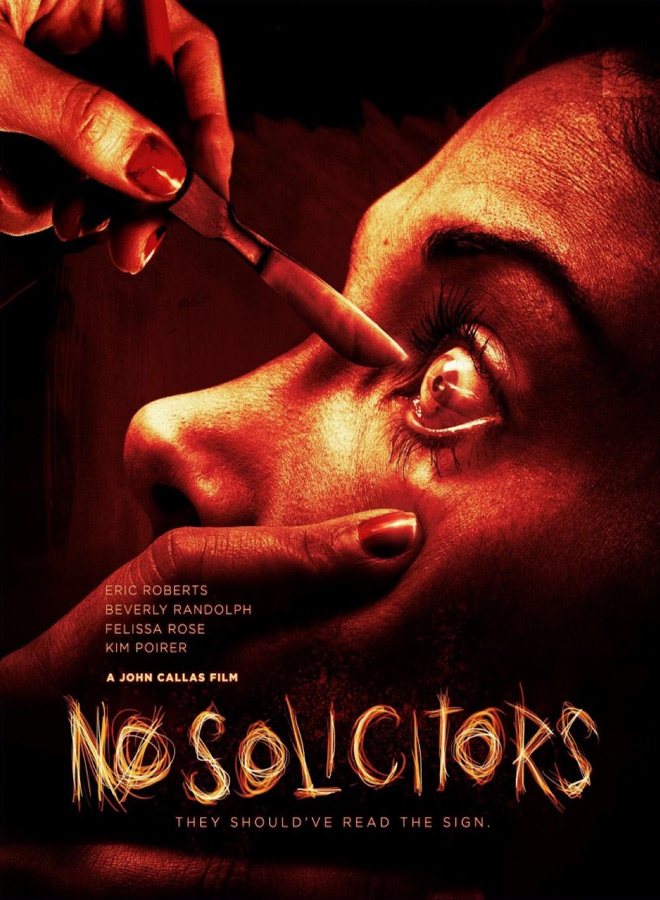