Indie Horror is at one of its brightest points in recent memory. Long years of mostly uninspired Horror from big studios wore down the audience and they have come to expect derivative plot devices and terrible scripts. Over the past few years, an increasing number of fans have turned to Indie Horror films because they want to see young filmmakers take risks the studios have not allowed. Los Angeles Thriller Film Festival 2016 winner Nocturne is a good example of what Horror audiences are looking for as it gives us enough fright without relying on the typical jump scares, and most importantly, provides an original, interesting story that keeps viewers invested.

Officially released on DVD as of July 25, 2017 through Koan, Inc/ Monarch Home Entertainment, the Stephen Shimek (The Maze 2010, Dudes and Dragons 2015) directed Nocturne is a movie that will require viewers to stay the course past the first 30 minutes or so. It is almost certain that they will think they have seen this film before and where it is going. The story focuses on a young woman named Jo and her 5 friends who get together for a night of drinking and partying. Soon after, they decide to play with a Ouija Board and the party spirals into a mess of dirty secrets, repressed memories, and overall discord in the group as the evil influence starts to take over. Sounds familiar, right?

The setup is basic, but Nocturne ends up with its own identity through a pretty clever blend of Supernatural, Body, and Psychological Horror. It is not perfect, but in different hands the plot could have been a disaster. The audience is introduced to the characters and who they are well enough, and while they are not particularly memorable, they never approach the cringe-inducing frustration we feel all too often.

In addition, the cast is not well known but the performances are all solid. The actors deserve credit for getting more out of their characters than what was written. Jo, played by Clare Niederpruem (Zombie Hunter 2013, The Mentor 2014) and Maren, played by Hailey Nebeker (Rubi, 2011, The Witching Season series) have a lot of screen time and make the most of it. There is also the sappy but likeable couple, the jock, and the weirdo, all archetypes but all have some depth to them. There are a lot of moments past the halfway point that are fake-outs designed to give the audience a false sense of certainty and they are effective, and the ending is unexpected and well executed. Once the movie really gets going the ride is good, it just perhaps takes a little too long to get there.

Probably the weakest part of Nocturne is the first half, particularly the script, which embraces the derivative more than it has to. However, the overall story is well written as well as focused, and does a lot of things right. The violence factor is fairly strong too, especially one scene in a bathroom that will no doubt make most viewers squirm.

While Nocturne tries to do a lot and never quite reaches its potential, it is a good film that manages to balance a precarious story without tipping it over. The budget is low, but it is never a problem as Shimek does a commendable job at the helm and is always in control. The actors are all effective, maximizing their time and not letting the audience hate them, which they will want to. Additionally, the movie provides genuine scares in a few different ways throughout, making it a nice package overall with more good than not.

Overall, Nocturne is the kind of film Horror audiences want – one that takes risks and has a strong focus on storytelling over cheap thrills. It is a good example of what passion and talent can do, and is better than a fair amount of the big studio projects that are often burdened with writing that is mediocre at best. It does not reach the level of the best Horror films of the year, but it is a solid Indie film whose positives are refreshing amid a lot of stagnant water in the genre. Overall, Nocturne is worth a Horror fan’s time, and CrypticRock gives it 3.5 out of 5 stars. 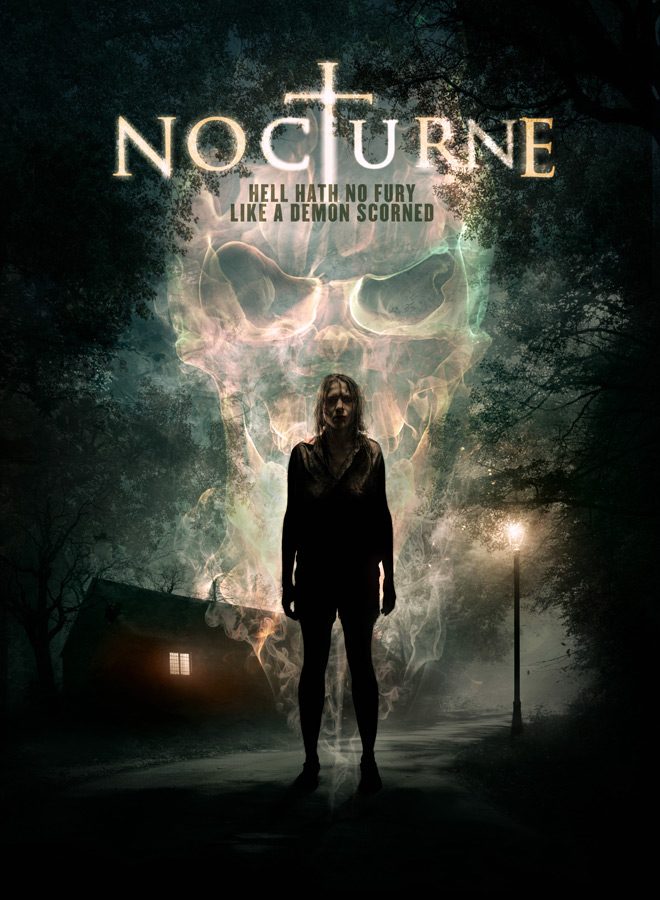