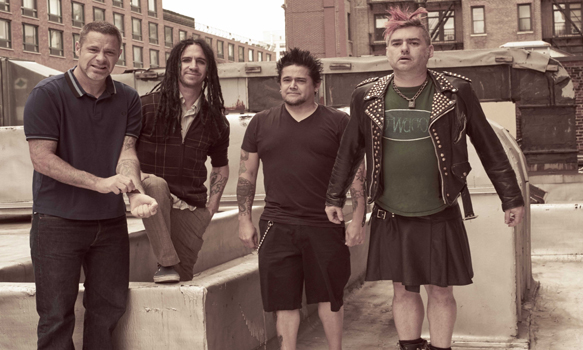 In its truest form, Punk Rock is a snotty-nosed angry kid who is kicking and giving the bloody finger to the man, or so it was in its early heyday. Now having been forced to meld itself somewhat into the music industry traction of compliance, Punk Rock has broken its subsidiary into multiple junctures, yet somewhere between reading between the lines comes bands like NOFX.

Southern California gave birth to NOFX back in 1983 and, surviving through the tail end golden days of old when the ’90s boom struck gold, they maintained their following, even increasing its size without a prescription written for music Viagra. How? Because NOFX just did what they do. Staying true to who they are, they have  never taken a backseat to be only remembered as a, “Hey, you guys are a legacy!” No, not NOFX, they stomped the side of remaining current and flow, and they are as much a Punk band in 2016 as they were back in the early ’80s.

Fast forward to present day, First Ditch Effort is NOFX’s thirteenth studio album and their first since 2012’s NOFX album. Released on October 7, 2016 via Lead Vocalist/Bassist Fat Mike’s Fat Wreck Chords, it could be said that First Ditch Effort is their most real, honest, and intellectual work to date, standing alone as a cohesive effort. That in mind, this album may just be the band’s true story set to music, and they cut right to it with the track “Six Years On Dope.” As Guitarist/Vocalist Eric Melvin and Fat Mike unload with melodic yells over the ninety seconds of the tune, it purposefully speakings about working out of self-annihilation. On “Happy Father’s Day,” Fat Mike screams at his own dad and declares his intent to end the family name, certainly in a effective and clever spin. Then, “California Drought” sings about sobriety as Fat Mike decides that maybe after recording First Ditch Effort, approaching fifty in 2017, it might be the right time to give up certain things. Really, in many ways, the lyrics are a devout testament to Fat Mike’s skills as a lyricist, and that has been one thing NOFX fans have always been able to count on.

Another highlight comes with “Oxy Moronic,” the longest song on the album with an anti-drug statement. Clever lyrically, the music video is a must see to match the song’s catchy sound. With six more quality cuts in between, including “I Don’t Like Me Anymore” and “It Ain’t Lonely at the Bottom,” the tribute to No Use for a Name’s Tony Sly, “I’m So Sorry Tony” really hits home. Opening up with soul-letting piano and guitar, as the acoustic intro unfolds, it seems to lead into a corny feel, but quickly turns into a proper hell-yea tribute to Tony Sly. Fat Mike simply says why he misses his friend with the words, “I’m sorry that I wasn’t there for you in the end/I was there when you needed a eulogy but not when you needed a friend.” Heavy, open, true, and honest, the album closes with “Generation Z,”  a song about hope. Maybe something Punk was not ever intended to do, but 2016 has been a bastard of a year, and maybe it is high time we gave it a little sunshine. Adding to the finale, Fat Mike’s daughter and Tony Sly’s daughter provide some nice backup vocals.

First Ditch Effort bares it all and it reaches a deeper level of thought. Through the years, everyone has wrestled with what side they are on… the dark or the light… the old or the new… NOFX pose the very same thoughts everyone has. There is not a definitive answer, and maybe no one is really looking for one either. By no means has NOFX lost their sarcastic breath; it was just time to dig deeper into its channel for musical inspiration. Releasing First Ditch Effort soon after the band’s tell-all autobiography, The Hepatitis Bathtub And Other Stories, the album moves in that same contemplative style. NOFX still carries the Punk torch for songwriting in using cheeky humor, telling tales of drugs and women, but now, as they look back on those years, First Ditch Effort looks forward to the possibilities of what the future might hold. A worthy listen, CrypticRock gives this album 4.5 out of 5 stars. 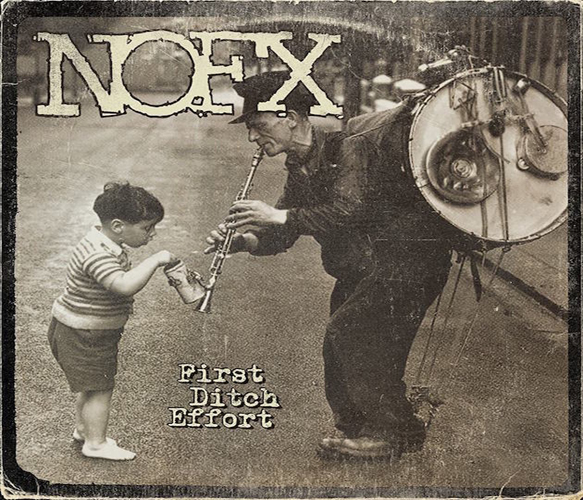