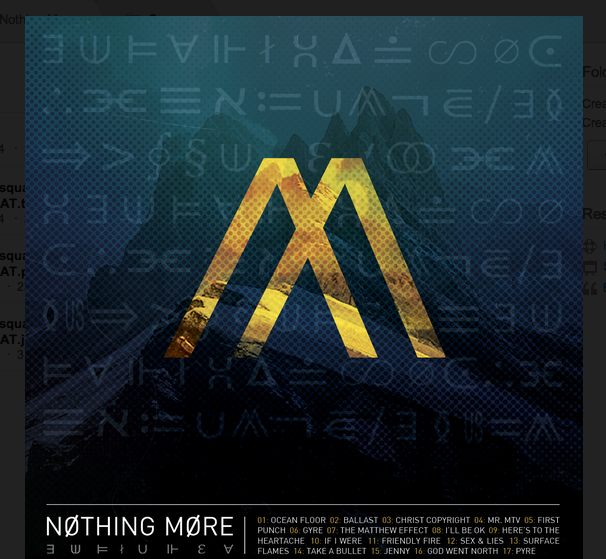 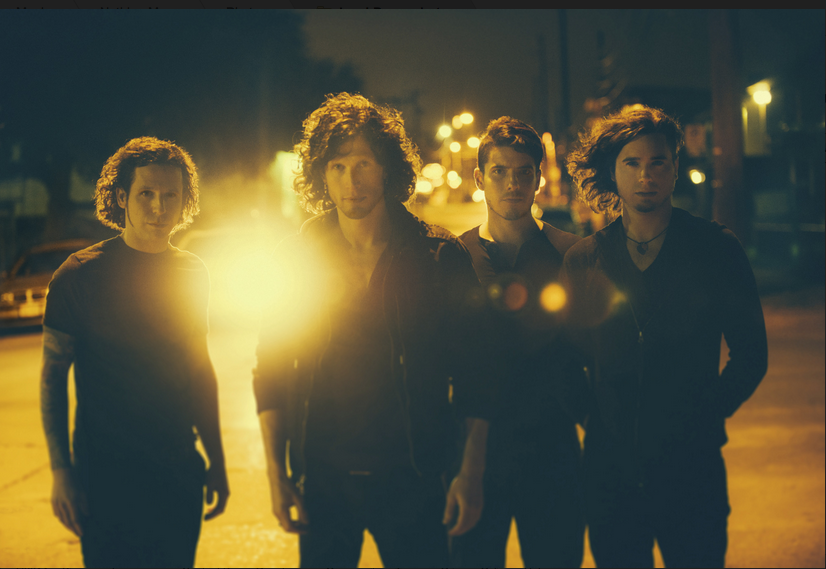 San Antonio, TX/New Orleans, LA rockers known as Nothing More has been on the music scene for a little over a decade now. Starting in their early teens back in 2003, when still in middle school, they began chasing their dreams of making an everlasting impact on the music world packed full of heart, determination, and passion. Nothing More consists of Jonny Hawkins (vocalist/Aux Drummer), Mark Vollelunga (guitarist/backup vocals), Daniel Oliver (bassist/backing vocals), and Paul OBrien (drummer).  The four are not just band mates but share a closer bond as long time best friends with one common goal.  Now in 2014 they are set to release their debut self-titled album via Eleven Seven Music which is one of the most highly anticipated rock albums of the year.

Opening the album is the track “Ocean Floor” which is a great introduction for what is to come. Upon first listen some may instantly think that this is a cut and dry metal band, but that is indeed far from the case, when in actuality, it prepares for a roller coaster ride of musical styles.  “This Is The Time (Ballast)” is the second track, right out of the gate, takes things into high gear. Released as a single back in March it is one of the bands most well-known songs.  Receiving instant praised, the track possesses a great mixture of drum techniques, bass line pickups, and guitar riffs that are flawless. Hawkins’s vocals alone stand out as explosive and unforgettable.  The third track on the album is called “Christ Copyright” and instantly immerses the audience in fast-paced drumming that gives the impression of a drum duel between Hawkins and Obrien; similar to what has been mastered by modern hard rock bands such as Godsmack. Vollelunga’s bass and Oliver’s guitar work match perfectly with the speed and tempo that Hawkins and Obrien dish out. This masterful playing lends listeners another example of how dynamic this band is and entices further exploration into the album.

Following up next is “Mr. MTV”, a perfect anthem for anyone that is displeased with the evolution of MTV.  Begun as a pioneer in music and developing into the best music television networks in the 1980”s through the mid 1990’s, modern times has seen MTV broadcast  programming that is nothing but scripted, reality television based shows. It is a bold move to talk, let alone sing about this topic, but that honest attitude is what makes this band that much more intriguing. They are not afraid to push buttons and boundaries and exceed limits, Nothing More goes above and beyond expectation levels and stand for what they believe.

Moving along, “First Punch”, can be viewed as one of the most radio friendly tracks off of the album. Obrien’s drumming along with Oliver’s guitar tones match with Vollelunga’s bass playing, working exceedingly well together.  Taking things down a few notches, next is the song “Gyre” which opens with enduring soft acoustic guitar and features eerie echoes in the background similar to that of the album opening.  A pleasant and inviting piece which finds perfect placement at this point in the record.

Opening with a great beat, “The Matthew Effect”, kicks into high gear, making it one of the most lyrically aggressive songs on the entire album.  Emulating an even beat like that of a heart throbbing along with powerful bass,  Hawkins brings out the character of aggression with passionate singing.  Showing their softer side musically and lyrically is the track “I’ll Be Ok”.  With lyrics that certainly hit home for many, the song tackles the topic of loss.  The vocal range and emotion that Hawkins exhibits will leave listeners with goose bumps.  Slowly but surely, taking things back up a few notches, is the track “Here’s to the Heartache” which suggests to the listener that it is a conceptual continuation of the previous track. Conveying a message that loss can be approached in many ways and it is always important to remember to celebrate someone, and love life.

“If I Were” is a song which begs to be heard on repeat, as Nothing More’s relentless sonic experimentation shines and Hawkins openly wears his heart on his sleeve. Showcasing the addition of some amazing backup vocals is “Friendly Fire” which will translate well into a live setting with its feeling and fast-pace. Pushing the boundaries of their limitations, “Sex & Lies” is another example of the band’s more aggressive sound as Hawkins holding nothing back singing.

As the album plays through, this band continues to surprise at every turn. They certainly do so with the song “Jenny”.  Beginning acoustically, Hawkins soft vocal tone go toe to toe with the opening before  breaking into a hard and heavy force.  Keeping listeners on the edge of their seat “God Went North” contains soft falsettos and piano mixed with the bands experimental sound.  Right off the bat, so much heart, passion, emotion, and intensity are shown. It is certainly one of those tracks that leave a lasting impression.  The backup vocals from Oliver, Vollelunga, and Obrien give full intense sound that is truly remarkable and astounding.  Closing out the album is nearly a ten minute song titled “Pyre”.  Featuring an haunting atmosphere, this is perhaps the band’s most experimental track on the album with a variety of sounds along with spoken excerpts from British philosopher Allan Watts.

Nothing More’s debut self-titled release is a phenomenal offering with a unique sound that is nothing short of well crafted and stunning. Taking a chance releasing such an edgy debut album it is safe to say Nothing More has broken down and passed every barrier test there is in rock music.  Without a single disappointing track on the entire record, Nothing More has raised the bar for modern hard rock. They have positioned themselves to be one of the biggest bands in 2014 with one of the hottest selling albums. Nothing More’s debut album shows sincerity, dedication, and a mature veteran-like quality. CrypticRock gives this album 5 out of 5 stars.

Read an interview with Nothing More’s Jonny Hawkins: