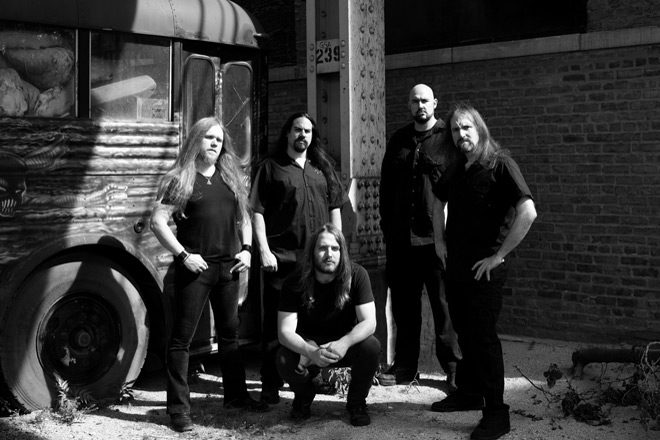 It may not be a high-profile name in the international Metal scene, but Novembers Doom has been one of the enduring outfits in the underground Death Metal community. Despite their excursion to the various dark and ornate themes of the genre it is associated with, and Death Metal’s brashness and aggressiveness being the heart and the dripping blood of its music, Novembers Doom is never intimidated to cross the hairline boundary that usually separates Death and other subgenres of Metal that are extreme opposites of each other.

Formed in 1989, in Chicago, Illinois, United States, the band that eventually evolved into what it is known today currently consists of remaining founder Paul Kuhr (vocals) along with Lawrence Roberts (guitar), Vito Marchese (guitar), Mike Feldman (bass), and Garry Naples (drums). In their nearly three decades of existence that is challenged with lineup and record-label changes, Novembers Doom still has an impressively prolific discography, from the ghastly growls and heavy gloom of 1995’s Amid Its Hallowed Mirth, to the Gothic-influenced and more melodic sounds of 1999’s Of Sculptured Ivy and Stone Flowers, to 2007’s lyrically conceptual The Novella Reservoir, to 2009’s Into Night’s Requiem Infernal. Now they return with their tenth overall studio album, Hamartia.

Released on April 14, 2017 via The End Records, Novembers Doom’s new album finds the music of the band initially in its original, straightforward Death Metal predisposition only to evolve swiftly and inconspicuously to the colorful left-field sonisphere of the broad Metal spectrum. It opens with the ironically bright energy of “Devil’s Light,” whose cacophonic vocal rumbles are complementarily balanced by the fluid synthesizer melody and tuneful guitar interlude.

With the same intensity but in a less-aggressive machination, the following “Plague Bird” is what may be described as an epitome of a Death Metal ballad—a concoction of anthemic guitar ad-lib and interplay of baritone croons and deathly snarls. The ensuing “Ghost” and “Ever After” are forays into dark Pop/Glam Metal, owing to the slightly morbid yet romantic lyrical theme, customary guitar plucks, distorted power chords, harmonized guitar lines, and highly melodic vocal quality; it will fit well on a playlist that includes “Eyes of a Stranger” by Queensrÿche, “When the Crowds Are Gone” by Savatage, and “Nothing Else Matters” by Metallica. Then there is the slow, somber, aurally rustic, and melodramatic piano-led title track, which takes the listener to an even darker, yet sentimental corner of Novembers Doom’s music.

“Apostasy” returns the album to Death Metal proper, harking back to similar styles by the likes of Obituary (“Slowly We Rot”), Napalm Death (“Suffer the Children”), and Cannibal Corpse (“Evisceration Plague”). The next track, “Miasma,” builds up to something more progressive, as highlighted by the acoustic-guitar strums, guitar-volume swell, and vocal harmony. This acoustic excursion continues with the ominous-sounding “Zephyr,” employing once again the lethal combination of virtuosic guitar playing and growling-singing vocal styling.

The second-to-the-last song, “Waves in the Red Cloth” has that cinematic characteristic, horror-style; with its angular guitar rhythm onomatopoeically signifying butcher knives chopping into the flesh of whoever was wearing that bloody cloth. Finally, Hamartia ends with the structurally striking “Borderline,” another display of Novembers Doom’s versatility and ability to create well-conceived Glam Metal ballads and place these alongside extremely brutal corpse-grinders and then get away with it.

Thirty years on and Novembers Doom is still up and running, churning its odd yet interesting mélange of various Metal subgenres that proves to be intimidating, appalling, fascinating, and engaging in equal measures. Their latest offering is a perfect example of this metallic progressiveness; there is surely something sparkling and secretly sentimental for every type of Metalhead. CrypticRock gives Hamartia 5 out of 5 stars. 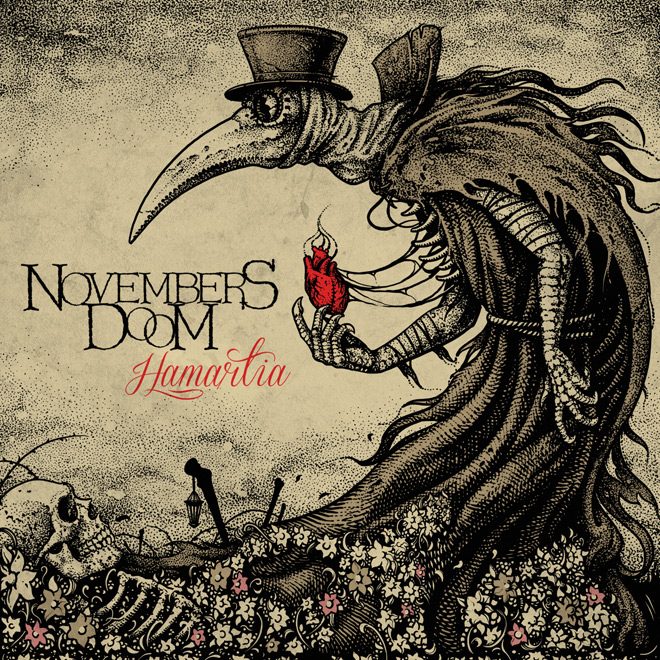