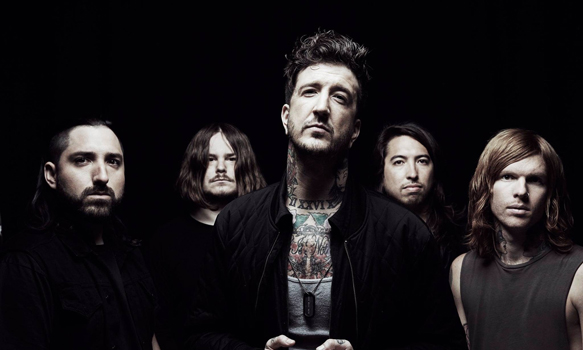 Since releasing their self-titled debut album in March of 2010, Of Mice & Men have accomplished a great deal. Making for one hell of a resume, 2011’s The Flood reached for greater heights, and 2014’s Restoring Force hit #1 on Hard Rock charts. An impressive rise to dominance, what makes this band really matter is that they have never stopped pushing themselves to go further. Strong enough to headline tours on their own, through the years they have shared the stage with Metallica, Queens of the Stone Age, Linkin Park, and most recently, Slipknot and Marilyn Manson. With an ever-growing fanbase, the band is now ready for the next step in their evolution with 2016’s Cold World. Released on September 9th via Rise Records, the album was released a week early on Apple Music, and is poised for greatness.

Calling Southern California home, the quintet of Austin Carlile (vocals), Aaron Pauley (bass), Valentino Arteaga (drums), Alan Ashby (guitar), and Phil Manansala (guitar) recorded Cold World with Restoring Force Producer David Bendeth. Beginning work while Carlile was still recovering from multiple surgeries as a result of his battle with Marfan Syndrome, he battles on, and is a beast. That in mind, the emotion of all that the band has gone through can be heard brilliantly throughout Cold World. To their credit, musically and lyrically, the band used adversity by thriving in the studio, channeling their emotions into a sound that cuts extremely close.

Opening with the melodic “Game of War,” Of Mice & Men make a statement with a snare like a battlefield march. It takes experience to carve out songwriting of this nature, both solid and stark. The battle is on, and “The Lie” delivers with a solid punch of death growls, punctuating guitar licks, climbing clean vocals, and head-banging bass. Simply put, choppy and driving, it is exceptional Hardcore. Next comes “Real,” which hits with some lyrics that might be really close to real life for Of Mice & Men. Walking through a disease like Marfan Syndrome with Austin Carlile, as a band, it is a testament to the bond they have with each other as individuals. As far as the song, it is filled with beautiful vocal work reminiscent of the best of  Warped Tour bands like Blessthefall, Carlile’s former band Attack! Attack!, Red Jumpsuit Apparatus, and Anarbor back in the day.

Already rattling the audience within the first handful of songs on the album, it must be noted, this is not Restoring Force. Cold World is raw and on a deeper harmonic gut level. For example, “Like a Ghost” is nothing ghost-like at all with Pauly and Carlile trading off vocals in a soulful transparency. Cutting to the bone, Pauley says, “Whether it’s because of addiction, depression, or something else, there are a lot of people in this world today who don’t know how to take love.” In your face, opening with space in the music and talks, most likely about Carlisle’s detox from all of the psychotropic and pain medications, it screams of desperation and the shadow of a life set to heavy bass and drums. The restraint of the mix adds to the transformation of the song, gaining an analog sound; a bit tinny and real. Here, both levels of Chester Bennington is being channeled pre and post throat surgery.

Speaking of which, “Contagious” is definitely influenced by Linkin Park, but with the Cold World twist of an instrumental called “-” bridging the gap to “Pain,” an auditory onslaught of the physical agony that Carlisle experienced after letting go of the pharmacological buffer to sanity. Screams of anguish, it is filled with rage, blinding and boiling up with squealing electronica. Nightmares are made of this, watch the beautifully twisted music video associated with the track to see why. From there, the transition to “The Hunger” is the rebirth of a life where restrained vocals are laid over a subtle palette of bass and drums.

A glimpse of hope, “Relentless” is the victory lap, and if it seems that the lyrical theme is getting kicked to death, then maybe it is drilling the point home. Hard-rocking, it poses the question of resilience and determination. Thereafter comes “Down the Road,” which is a bit predictable but does have a great mix, breathing with energy. Space within the vocals, with the contrast of Pauley and Carlile, it is refreshing and welcoming. Stripping it down, it is obvious that Of Mice & Men are maturing and have learned a lot from experience.

Heading out of Cold World with the instrumental ‘”+”,  it segues into “Away,” bring to mind Metallica’s performance with the London Philharmonic Orchestra. This, prior to the album’s final anthem, entitled “Transfigured,” which is comfortably numb or questioning with soaring vocals and guitar work. Riff-laden, it is a statement of moving on with lyrical runs and a driving bass line.

As a genre that is constantly expanding, Of Mice And Men show with Cold World that it takes all genres to build a great Rock album. Pauley states, “There’s a magic element to music that you can’t ever gauge or quantify but that everyone can understand.” With that, Carlile’s “becoming so sober and getting to the point of feeling everything” during the production of Cold World resulted in Of Mice & Men creating their most uncompromising and ultimately most cathartic album yet. CrypticRock gives Cold World 5 out of 5 stars. 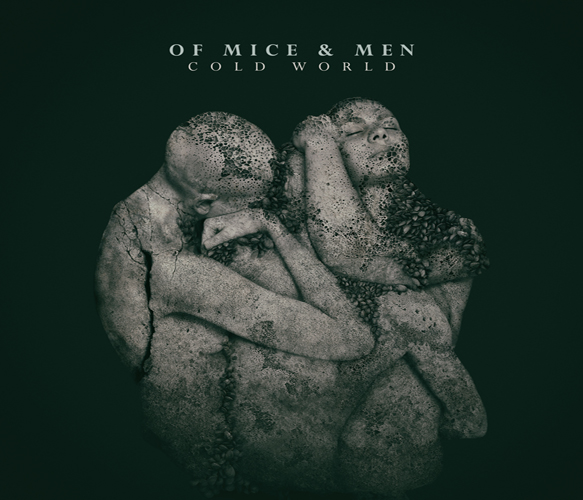