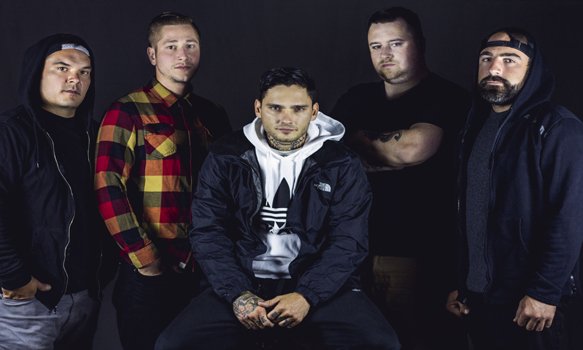 Still relatively unknown in the mainstream, despite sixteen years of experience, New England based On Broken Wings are essentially pioneers of a sub-genre. That sub-genre being dubbed moshcore, they are also considered one of the first Deathcore bands as well. Formed back in 2001 with Jonathan Blake (vocals), Mike McMillen (guitar), Bure Medeiros (guitar), Jerome McBride (bass), and Kevin Garvin (drums), On Broken Wings has been mostly a side project for the members, focusing much of their time on other principal projects, such as production and other bands. Nonetheless, their impact should not go unnoticed, and back in 2001 they caught the scene’s attention with their self-released Number One Beautiful EP. Following up in 2005 with It’s All a Long Goodbye, in 2007 with Going Down, and in 2012 with Summer Solstice, through it all, On Broken Wings has triumphed on.

Still banned from some clubs across the United States, concerning their unusually violent live shows and the band’s apparent encouragement of crowd violence, On Broken Wings remain a topic of conversation as they return in 2016 with their brand new album, Disintegrator. Released on August 19th via Artery Recordings, Disintegrator ends years of silence and squash rumors that the band had broken up.

Immediately attention grabbing, the album opens instantly with a crying baby before hard-hitting riffs follow immediately after. Only for several seconds, they are agonizing ones, setting the tone of the album to follow. Going into “Quicksand Breaths,” the band mixes aggressive riffs and violent drums before the clean vocals arrive without warning. Amplified by echoes on heavy riffs in the background, it leaves the listener little time to catch their breath. Those proverbial breathes are caught during the short prelude entitled “The Swamp,” which creates an atmosphere of night crickets’ sounds, but it becomes more disquieting, resembling to stomach noises.

Reaching out with aggression, “Dragging Weight” begins with guttural screams, as the lyrics center around a violent theme. This continues with “Rubik’s Cube Obsession” where the guitars and vocalist mirror the feeling of anger, pain, and disgust. Brilliantly mastered,“Kunomuia” almost starts exactly where the previous track left off  with an unpleasant fly’s noise before erupting again. Then, no less aggressive, “Crowns Meant For King” is definitely the catchiest song of the album with its captivating melodies.

Completely alternating the mood, “The Garden,” clocking in at just over a minute, features a flowery melody played on acoustic guitar on a background of bird song, transporting the audience into the Garden of Eden as an illusion. This prelude has nothing to do with the album, but nonetheless is quite tranquil. Almost as if the band was playing a joke, they immediately come back in like a monster into the brief daydream with “Dirt Nap.” A brutal slap back into reality with its violent riffs and brutal voices, it crushes. Thereafter, “The Box” builds with a rusty swing noise as the tension builds with the first riff, warning the listener some serious things are about to happen. This nightmarish experience contains several indefinable sounds, which resemble the cries of a crowd in a panic, enough to create a feeling of anguish. This feeling of chaos carries over into “Ego Ideal,” unquestionably one of the best songs from the albums. Uniting groovy passages and others a little slower, it is the essential Moshcore piece On Broken Wings created.

Disintegrator better defines On Broken Wings hybrid style, simply put as special and unique. The album cover pretty much sums up the spirit of the group and its musical style; morbidly atmospheric, created by different sounds, reflecting a dark world. In addition, there is a small Progressive side as well where the structures are never the same. A quick listen, with each track less than three minutes each, the energy deployed is constant. Relentless, Disintegrator is a fitting return from On Broken Wings. CrypticRock gives Disintegrator 4 out of 5 stars. 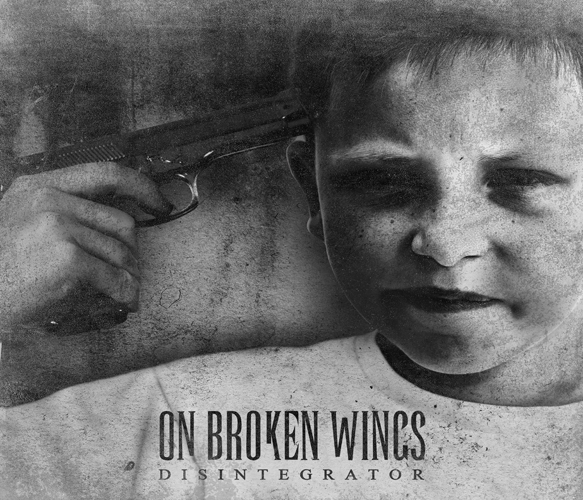