On Sunday November 15, 2015, ABC aired two episodes of the Fantasy/Adventure Once Upon a Time. Written by David H. Goodman (Buffy the Vampire Slayer TV series) and Jerome Schwartz (Once Upon A Time In Wonderland TV series) episode eight of season five, titled Birth, focused on the reasoning behind Emma Swan donning the Dark One Mantle. 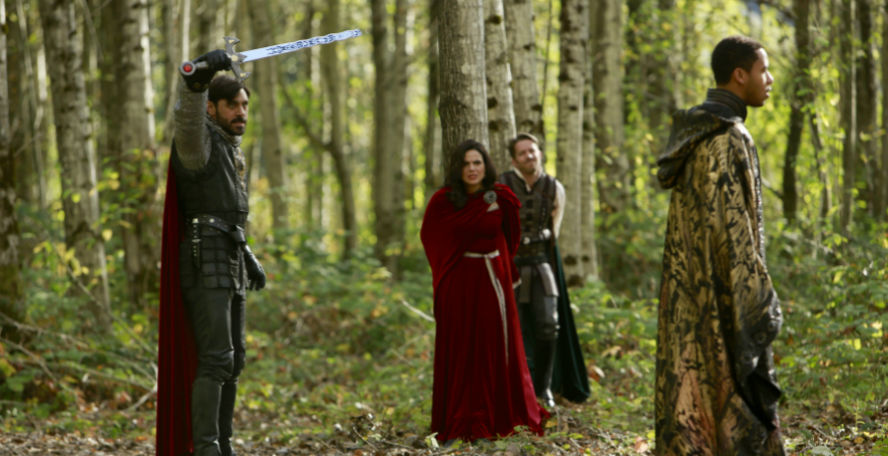 The action begins when David/Prince Charming (Josh Dallas: The Descent: Part 2 2009, Thor 2011) interrupts a romantic dinner shared by Arthur (Liam Garrigan: Strike Back TV series, 24: Live Another Day TV series) and Guinevere (Joana Metrass: Sinais de Vida, Dracula Untold 2014). He confronts his “friend” about burning the magical Crimson Crown mushroom instead of helping them reach Merlin. Arthur abandons his bride and runs. Hook/Killian (Colin O’Donoghue: 24/7 2006, The Rite 2011) pursues, but Arthur bests him in a sword fight. Just as the conniving “Once and Future King” goes in for the kill, Emma the Dark One (Jennifer Morrison: House TV series, How I Met Your Mother TV series) deflects the blow with the freshly-restored Excalibur. Emma explains, “It doesn’t control anyone anymore” as Arthur tucked tail and fled. Hook/Killian and Emma share a sweet moment as Emma exclaims everything she has done is for Hook/Killian.

Three weeks earlier when Emma returned to Granny’s Diner, she discovered the party sent to liberate the then broken Excalibur from King Arthur absent. Merlin (Eliot Knight: Sinbad TV series, How to Get Away with Murder TV series) popped in and Zelena, the one-time Wicked Witch of Oz (Rebecca Mader: The Men Who Stare at Goats 2009, Iron Man 3 2013), had magicked Arthur’s sword to control the most powerful magician. His message was to deliver the dagger and flame to Arthur or her family and boyfriend die. Before leaving, he implored Emma not to seek revenge.

In present day Storybrooke, the gang tries to discover Emma’s motivation. Regina (Lana Parrilla: Miami Medical TV series, 24 TV series) thinks Emma is manipulating Hook/Killian and says, “It’s what Dark Ones do.” Gold/Rumplestiltskin (Robert Carlyle: 28 Weeks Later 2007, Full Monty 1997) reports Emma’s theft of his squid ink, a magic item useful in controlling the Dark One saying, “This isn’t about what you did. It’s about what she did.” Gold/Rumplestiltskin advises Hook/Killian to give Emma a reason to find him. In desperation, Hook/Killian jumps from a building, but Emma saves him from harm. The two talk of optimism and desperation. After a discussion regarding the trophy jewelry Hook/Killian wears, the one-time pirate begs, “I forgive you. Come clean.” The two share a passionate kiss and Emma says, “I can’t tell you until this is all over.” Hook/Killian then collapses due to Emma drugging him. 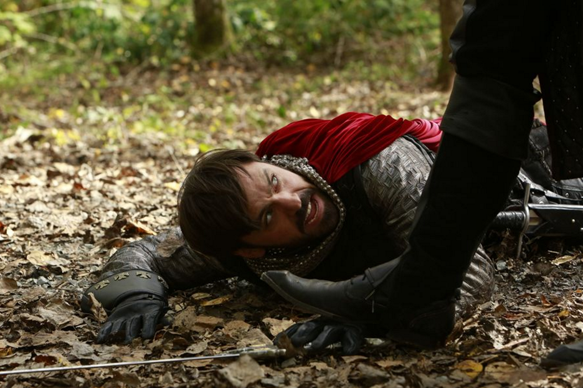 Emma’s son, Henry (Jared S. Gilmore: Mad Men TV series, Overnight 2012), approached Emma when they were in Camelot to explain “Operation Light Swan.” Hook/Killian and Henry were in cahoots, searching for a house for Emma, a promise of their future together. Emma decides to use the dark magic one last time to save her loved ones and attends Arthur’s exchange. With Emma’s mother, Snow/Mary Margaret (Ginnifer Goodwin: He’s Just Not That Into You 2009, Big Love TV series), Killian/Hook and the others tied to trees, Emma said to Arthur of the flame and the dagger, “You don’t get what you want until you free my family.” Arthur and Zelina taunt her and orders Merlin to attack. Though she puts up a valiant fight, Emma falls. As added incentive to do as she is asked, Arthur orders Merlin to murder Snow/Mary Margaret. Emma pleads with the mage, “Fight it!” Merlin proved his prowess by shaking Arthur’s hold on him. As Hook breaks free from his bindings, Arthur cut him, but Emma is able to heal him.

Though only two months pregnant with Robin Hood’s (Seasn Maguire: Scott & Bailey TV series, EastEnders TV series) child, Emma magically speeds Zelena’s pregnancy and Oz’s Wicked Witch goes into labor in Storybrooke. Dr. Whale (David Anders: Vampire Diaries TV series, iZombie TV series) delivers the baby girl while the others stand guard. Emma may need the cries of a newborn child to enact her scheme. Their fear for the infant was unfounded, though; Emma stole Zelina away instead. She must serve as a vessel to store Dark Magic and then Emma will kill her. Hook/Killian finds the squid ink to paralyze Emma. Zelena stabs Hook in his heart, but when he does not die, he asks, “Why am I not dead?”

In Camelot, despite pleas to allow Hook/Killian to die from the unhealable blade from Excalibur, Emma’s love blinded her. She said, “I don’t care what happens to me. I can’t lose Killian.” She takes the final step into darkness for love. Merlin’s name on Excalibur disappeared and is replaced by Killian Jones’ (AKA Captain Hook) name. Hook was a Dark One and wanted to know, “Why didn’t you tell me?”  But Emma wanted to fix everything first and he says, “So much for our future, Swan.”

Arthur and Zelena search in DunBroch for a magical helm acquired by Merida’s father, King Fergus, The Bear King (Glenn Keogh: Days Of Our Lives TV series, Transformers: Age Of Extinction 2014) from the wild-haired Witch (Lilly Knight: Big Love TV series, The Purge: Anarchy 2014) during a time of insecurity. The helm has the power to control the troops. The Witch demands the return of the helm as well, or she will turn the citizens of DunBroch into bears.

King Fergus hired Mulan to train in combat and protect his daughter, Merida, before the fateful battle that claimed his life and plunged Merida into a cycle of doubt and self-blame. When her father was killed, Merida had the assailant in her sites but she missed the shot. Before the battle, Merida had asked her father how to lead and he answered, “The only way to inspire them is if their King is willing to lay down his life.” After their conversation, Fergus threw away the magic helm.

To protect her kingdom, Merida offers the kingdom to whichever clansman finds the helm. Merida finds Mulan, the young warrior who became a mercenary to emotionally distance herself from a broken heart. Merida paid her one-time tutor to help her find the helm, so they visit the Witch’s cottage and find a wolf guard. They spill the cauldron, whichtransforms the wolf into Ruby/Red, a werewolf wearing a magical red hood. They use a cloak and Ruby/Red’s tracking skills to find the area where Fergus discarded the helm. Arthur and Zelena arrive as well and it is revealed that Arthur killed Fergus. They fight and Merida retrieves the helm, but the clansmen’s declaration of “Long live the Queen” is interrupted by the Witch as she has come to collect the helm. She reveals that the quest for the helm as a test and King Fergus had sought her help to assure the Kingdom of DunBroch. However, since Magic is not direct, the assurance was convoluted. Merida proved trustworthy due to her willingness to sacrifice herself for the kingdom.  The Witch gave a coronation present- an ale to communicate with the dead. Merida visited her father’s grave and shares a tender moment. Mulan returns Merida’s money and leaves with Ruby/Red. At the end of the episode, Merida threatens, “You do not know what’s coming for you, Arthur.” 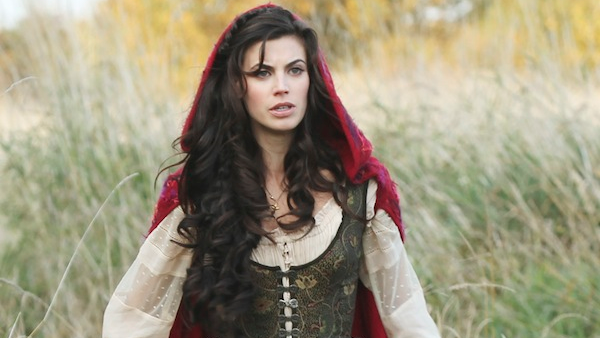 After all this action during the last two episodes, including Excalibur mended, Hook/Killian becoming a Dark One and Merida’s promise to seek revenge, the excitement has just begun for fans. The  tangled and compelling stories of these beloved characters are dramatic and thrilling and leaves the viewer craving more.  CrypticRock gives Birth and The Bear King 3 out of 5 stars. 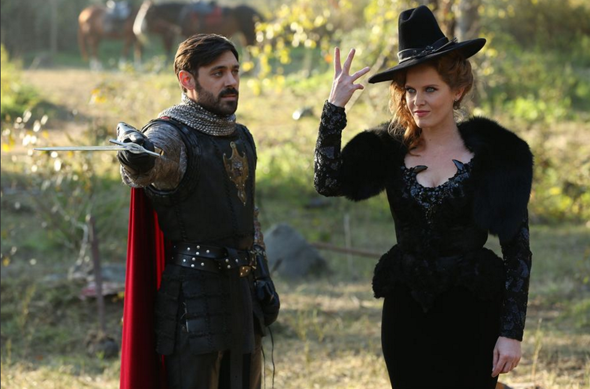 ABC, Birth, Fairytale, Once Upon a Time, The Bear King
Print page
0 Likes