Once Upon a Time – Nimue (Season 5 Episode 7 Review)

ABC’s Fantasy/Adventure series Once Upon a Time continued on Sunday November 8th with the episode entitled Nimue, as in the ‘Lady of the Lake’ from Arthurian legend. An episode explored the origins of Excalibur and of Merlin’s magic, it was one fans should be compelled to dig into. 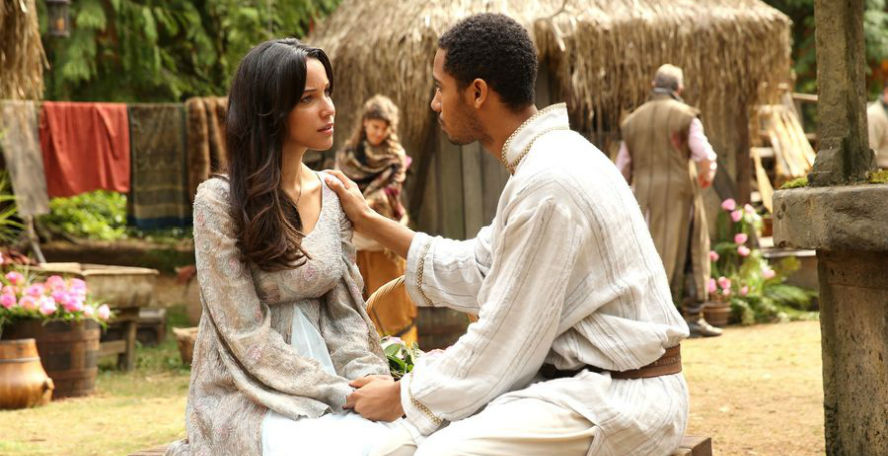 The action begins with the “Dark One Rumpelstiltskin” (Robert Carlyle) having a conversation with Dark One Emma (Jennifer Morrison). He said, “Excalibur’s promise was born eons ago. Now it’s time.” The scene switches to a desert years before Arthur’s birth. Merlin (Eliot Knight) and a fellow escaped prisoner stumble towards a glinting light. They discover that the glistening, which they assumed was a mirage, is in fact the Holy Grail. Merlin’s companion unwisely grabs the “gift from the gods” and drinks, but then explodes. Merlin approaches with caution, asks permission and says thank you after drinking. His good manners are rewarded with magic and grass begins to spring up all around him, transforming the barren into a lush forest.

Six weeks previous at Granny’s Diner, Regina (Lana Parrilla), Robin Hood (Sean Maguire), Hook (Colin O’Donoghue), Prince Charming/David (Josh Dallas), Snow/Mary Margaret (Ginnifer Goodwin) and Zelena, the one-time Wicked Witch of Oz (Rebecca Mader) plan to break into Camelot to steal Excalibur. Zelena proposes a plan in exchange for her freedom and Hook points out Emma’s new habit of pulling memories from people’s heads and trapping them in dreamcatchers. Merlin approached Emma to ask for help collecting a spark from the flame of Prometheus. When ignited, Merlin could use the flame to re-forge Excalibur. However, to claim the spark he and Emma will need to face the first Dark One, from whom all the evil that followed derived. He foresaw two outcomes, the worst involving him at the mercy of the most powerful dark one ever- Emma. He flashes his delightful smile and says, “No pressure.”  Before she embarks, Hook proclaims his love and gives Emma his ring saying, “It’s the reason I’m alive. Come back to me.” 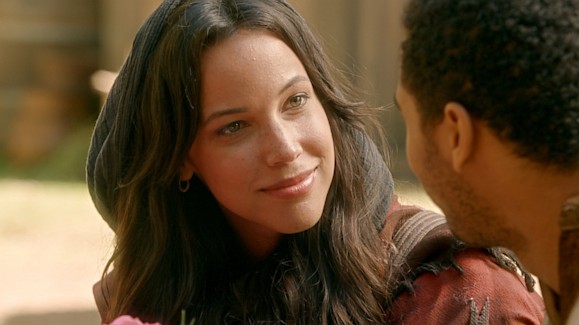 Two-hundred years before Camelot’s formation, Merlin and his apprentice healed the ill and injured. In a village, a freckle-faced beauty named Nimue charmed Merlin. She told of the evil, masked Vortigan burning her village and asked him to plant rare middlemist flower seeds from her home. As he waved his hand over them, they burst into flowers. He confided in her the origin of his magic and, because of its power, Merlin did not age or die. He proposed marriage, explaining a plan to sever the magic from himself so that he could live a normal life with her. She suggested a counter-proposal saying, “Let me drink from the grail.” He was intent upon cutting away his magic, though, and set off to find the means to recast the grail- The Flame of Prometheus.

In Camelot, Arthur (Liam Garrigan) and Guinevere (Joana Metrass) brew a liquid weapon capable of dissolving people and orders the guards to kill intruders saying, “This is war now.” As Regina, Robin, Hook, and Charming break into the castle to steal the sword, Snow and Zelina wait until Zelina presents a tale of woe and jealousy. However, the pregnant witch doubles over and, as Snow investigates, knocks her out and escapes into the castle. Meanwhile, Emma and Merlin near their goal and Merlin asks, “Have you embraced your dark powers?” Emma admitted to hurting her son, saying, “The darkness is winning, but there is still hope, right?” 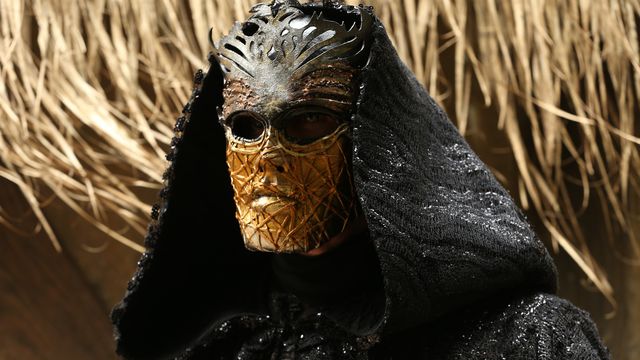 Years earlier, Nimue and Merlin visited Nimue’s decimated village only to discover Voltigan apparently sought the grail. Once they reached the flame and transformed the Holy Grail into Excalibur, a masked man attacked and fatally wounded Nimue. She survives, however, because she drank from the grail and pulls the masked man’s heart out of his chest, ignoring Merlin’s plea. As she crushed the murderer’s heart, Nimue transformed into the first, green-glitter-skinned Dark One and the flame extinguished and the Excalibur breaks. Merlin crafted a dagger from the broken bit and bound Nimue to it. After she donned her attacker’s mask and left, Merlin and his apprentice put the sword in a stone for safe keeping. They also discussed Merlin’s continued love for Nimue, despite her modifications.

In Camelot, Emma struggles with the evil influences of Nimue, Rumpelstiltskin and the previous Dark Ones who insist that Emma kill Merlin. Emma fights, proclaiming, “The power you have I don’t need.” She collects the spark but Nimue warns, “I’m not dead yet. I’ll be in there” as she points to Emma’s head. Meanwhile, Regina, Charming, Hook, and Robin surprise Arthur at his round table and Zelena reveals that Arthur freed her from the magical constraints they had imposed. She binds Merlin to Excalibur, much in the same way the Dark One was bound to the dagger. Power-crazed Arthur summons Merlin and orders him to keep the others from attacking.

The episode concluded in Storybrooke where Dark Ones, including Nimue and Rumpelstiltskin, encourage Emma to join Excalibur and its tip. Now viewers have to see what happens when Once Upon a Time continues Sunday November 15th with Birth. CrypticRock gives Niumue 3 out of 5 stars. 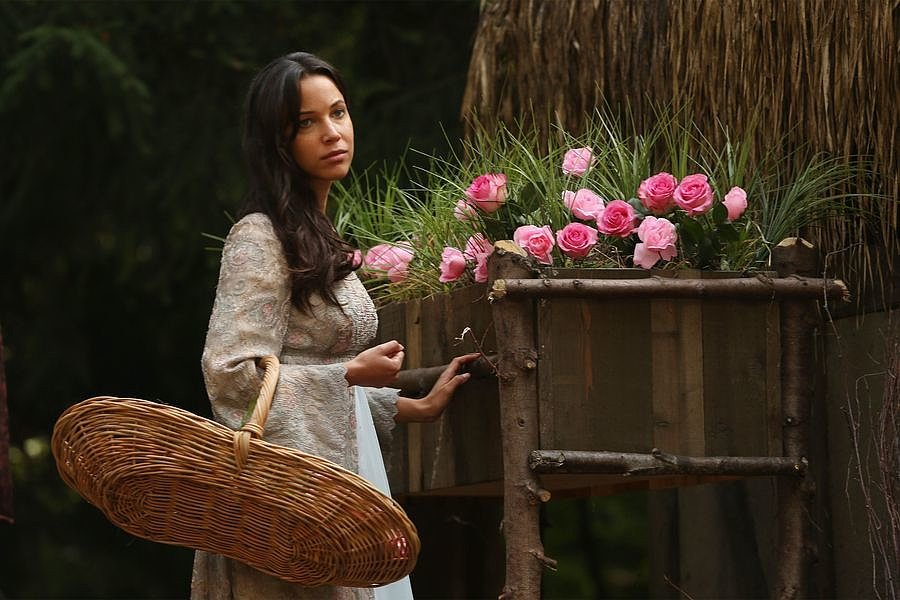