Once Upon a Time – Ruby Slippers (Season 5/ Episode 19 Review)

ABC broke new ground with its latest episode of the series Once Upon a Time. The series proved that true love’s kiss comes from different sources. Charming kissed Snow White. Emma kissed her son, Henry. Belle was not able to save Rumplestiltskin from his darkness with hers. Hades is practically begging Zelena for her kiss. Kisses play an important role in the Fairy Tale existence.

In the Fairy Tale land, Ruby Red and Mulan met up with Dorothy and her little dog, Toto. They formed a friendship after Zelena abducted Toto, demanding Dorothy’s magical teleporting silver slippers in exchange for the dog’s return. Zelena required their magic to retrieve her daughter in Storybrooke. During their rescue mission, Dorothy nicknamed Ruby “Wolfie,” and Ruby gave Dorothy the nickname “Kansas.” Flying monkeys attacked, and Ruby transformed into her wolfish self. Dorothy rode the giant werewolf to safety. Worried that she had put Ruby in additional peril, Dorothy slipped away to rescue Toto. However, when Dorothy tried to retrieve her beloved pet, Zelena pricked her with a magical needle, sending Dorothy to a magical sleep from which only true love’s kiss would awaken her. 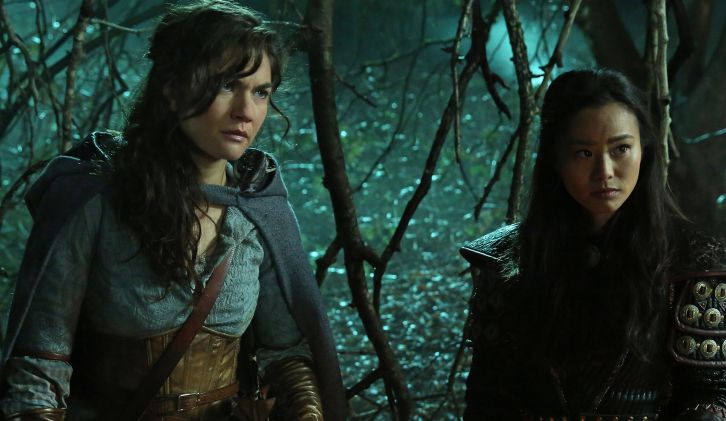 Zelena had then used the slippers to find her daughter, but as viewers may remember from the episode earlier in the season, as she struggled with Belle for possession of her child, Rumpelstiltskin’s magical vortex sucked the three of them to the Underworld. Ruby wished to find her missing friend. Since Ruby used Dorothy’s slippers as a focus for her search, she ended up in the Underworld as well. Her appearance in a magical hurricane caused a stir in the cemetery last week.

Belle approached Zelena, mother to mother. Zelena professed belief in no happy ending for herself. She gave Belle the sleeping spell, reasoning that Hades could not take the baby from a sleeping-cursed woman’s womb. Belle took the spell to Rumpelstiltskin with her plan. He was to figure out a way to get their baby freed of the contract with Hades. Once that is achieved, he is to take Belle to her father for love’s kiss to break the sleeping curse. 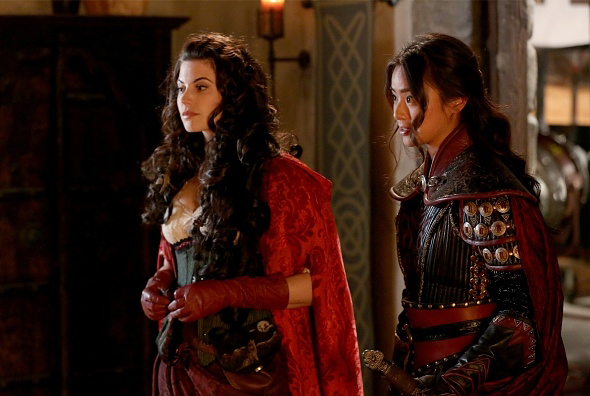 Regina reasoned with Zelena and discovered Dorothy’s plight. Zelena willingly gave up the silver slippers, too. The only family member who was kind to Dorothy was Aunt Em (Gina Stockdale: Little House on the Prairie TV series, Hope Island TV series), who ran a diner in the Underworld. The heroes hoped to bottle her kiss to awaken Dorothy. However, before she could blow her kiss into the bottle, she turned into liquid. Hades explained he had switched out an ingredient in the soup with water from the cursed River of Souls. He gathered up Aunt Em’s remains and warned the citizens of Underworld to have nothing to do with Emma and her friends.

Ruby and her best friend, Snow White, discussed Ruby’s feelings for Dorothy. Snow expressed love was worth the risk. She should use the silver slippers and save Dorothy. When she ventured out of the Underworld, she would take David to check on their son. Snow and David worried about him since Hades ordered Cruella De Vil to destroy the only means for denizens of the Underworld to communicate with their living loved ones. However, at the last moment, there was a switch. Since Hades wanted Hook to carve the original headstones, he could alter them. He scratched out Snow’s name and substituted David’s. Snow and Ruby ventured to Oz where Ruby woke Dorothy with true love’s kiss.

In the Underworld, Henry the Author showed his grandfather and the others his latest pages. Ruby and Dorothy reunited, and Snow hugged her son. While Hades poured the unfortunate remains of Aunt Em into the River of Souls, he professed to Zelena his continued devotion.

Executive Producers Adam Horowitz and Edward Kitsis told Entertainment Weekly, “This past Sunday’s episode was just another example of how in a Fairy Tale, as in life, love is love.” One wonders, though, about the eternal torment of such seemingly innocent characters as Aunt Em in the River of Souls. Future episodes will explore how the remaining heroes will escape Hades’ clutches and return to Storybrooke. Also, will the Fairy Tales be rewritten to allow more villains happy endings? CrypticRock gives this episode 4 out of 5 stars. 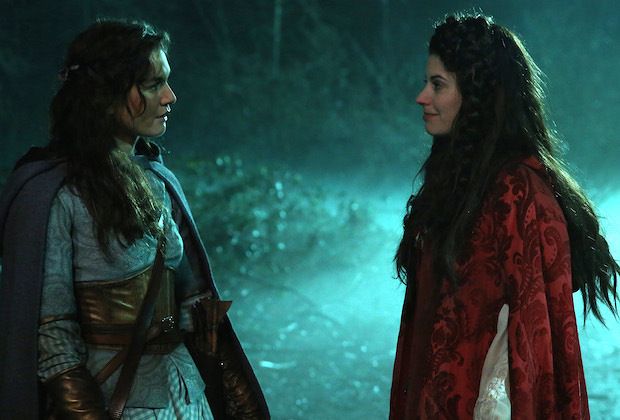