Once Upon a Time – Siege Perilous (Season 5, Episode 3 Review)

In the New England town of Storybrooke, Maine, fairy tale characters make homes after a curse expelled them from their enchanted land. Much has changed during the four seasons since ABC’s Once Upon a Time first aired back in October of 2011. Those changes have included characters development with the strength of friendship and love, bringing loyal viewers to Season Five, Episode 3, entitled Siege Perilous, when the famous residents of Camelot found themselves stranded in Storybrooke. 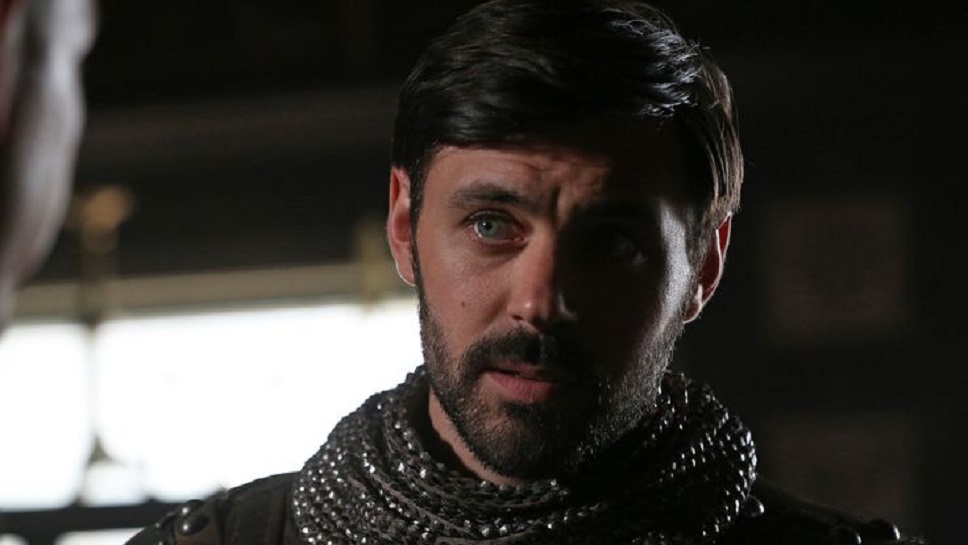 At this point in the season, as the result of self-sacrifice, Emma Swan’s name replaced Rumplestiltskin’s on the Dark One dagger made from the tip of King Arthur’s sword, Excalibur. She journeyed to Camelot to find the master magician Merlin, hoping to thereby free herself from the Dark One curse. Assailed by an invisible Rumplestiltskin who urged her to succumb to the dark side, Emma struggled to maintain her inherent goodness.

When she disappeared, the Storybrooke residents mounted a rescue mission. Her Snow White mother, Daddy, the Charming Prince David, son Henry, the one-time evil queen (and Henry’s adoptive mother) Regina, love interest Captain Hook, and a good portion of the town inhabitants were whisked in a magical maelstrom to Camelot. However, they returned to Storybrooke six weeks later, suffering from a new bout of amnesia. Emma, decked out in Dark One splendor, explained they had failed her.

The invisible Rumplestiltskin urged Emma to snuff out the light, thereby allowing future Dark Ones to perform their mischief unencumbered by remembrances of their previous lives and loves. To do so, Emma needed to extract Excalibur from its stone. She visited the dwarves in their mine and stole Happy’s (Michael Coleman) axe, saying, “If your name is on something, hold on to it.” She returned to her new home and swung at the stone, assuming “dwarven axes break anything.” However, the stone remained intact. Rumplestiltskin gleefully asked, “Ever think of kissing it?”

While in Camelot, Regina and friends searched through Merlin’s archives. She found mention of the crimson crown, a magical toadstool that grew in the Forest of Eternal Night and allowed communication between realms. Prince Charming quested for the magical fungus in the hopes of facilitating a chat with Merlin. King Arthur invited himself along. They exchanged personal histories. Arthur discussed the betrayal by Lancelot, and Charming admitted to previously meeting Lancelot, “He’s dead.” Charming also suggested Arthur should be more appreciative of his hard-working squire, Grif.

Back in Storybrooke, Grumpy complained about the theft, demanding Charming should stop behaving like a scared, protective parent and be the town’s sheriff. Snow reassured her husband, “In any world, you are my hero.” Arthur reported the theft of a magic bean from Camelot’s reliquary. He demanded its return. Charming devised an ingenious plan. 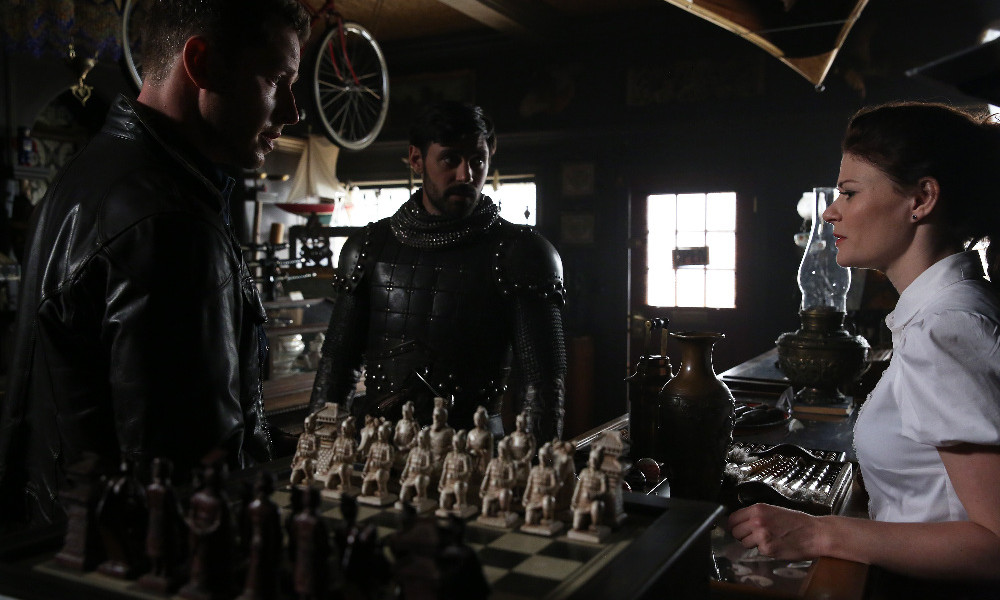 While in Camelot, Regina confronted her rival sister, Oz’s Wicked Witch of the West, Zelena. Zelena (Rebecca Mader: The Devil Wears Prada 2006, The Men Who Stare at Goats 2009) had disguised herself and seduced Regina’s love, Robin Hood. Regina promised a safe, loving home for the baby Zalena carried, but threatened, “It won’t be the same for you.”

At Granny’s, Hook and Robin (Sean Maguire, Meet  the Spartans) discussed fatherhood and true love. Granny (Beverley Elliott: Bordertown 1989, Unforgiven 1992) gave Hook a bag of food with a note from Emma, “Meet me at your ship.” Upon his arrival at the Jolly Roger, Emma suggested they talk and eat “like old times.” Hook glared at his altered lady-love, “This is nothing like old times.” With magic, she changed her arctic appearance and dark clothes to resemble her previous life. They talk about their relationship and Hook’s past with Rumplestiltskin, who he referred to as “the crocodile.” Emma is thereby able to find an implement that touched her predecessor before he became the Dark One.

While on the quest for the magical toad stool in Camelot, Arthur revealed his competitive nature. Charming crossed a rickety bridge over a haunted waterway to retrieve the crimson crown toad stool. He battled magical knights to reach where Arthur waited. Charming lamented. Somehow during the battle across the water, he lost the magic mushroom. “To quest means to seek,” Arthur consoles with a condescending grin. When they returned to court, he dubbed Charming “Sir David of the Enchanted Forest” and pointed to Lancelot’s vacant chair at the round table, saying, “I never thought I’d find someone I’d trust enough to fill that chair.” Snow left the hall to quiet her baby. Outside the festivities, the not-really-dead-after-all Lancelot (Sinqua Walls: The Second Half 2009, Shark Night 3D 2011) warned of a terrible villain in Camelot, “Arthur.”

In Storybrooke, Charming Sheriff David enacted his plan to root out the magic bean thief. Arthur’s squire fled. Charming caught him by knocking him off his horse with a blow to the head. The sheriff found a number of reliquary items within Squire Grif’s tent, but no magic bean. He did, however, discover the distinctive mushroom which jogged his memory. When asked why he stole the items, the squire said he was tired of how the residents of Camelot were treated. He said to Arthur, “You’ve hurt everyone.” Arthur bemoaned to David, “I’m always betrayed by those closest to me.”

In Camelot, Arthur revealed the stolen toad stool to his wife, Guinevere (Joana Metrass: The Spoiler).  In the Storybrooke prison, squire Grif (Giacomo Baessato, profile for murder) greeted Arthur (Liam Garrigan, The Pillars of the Earth). “I did only what you asked.” He promised to keep Arthur’s secrets, including the lie about ever having a magic bean. Arthur insisted his servant drink poison, which would allow Grif the chance to die in service to Camelot.

Belle (Emilie de Ravin: Lost) rushed to check on her one-time husband, the comatose Rumplestiltskin/Mr. Gold when her enchanted rose magically reformed. However, he was not home, because Emma the Dark Swan magicked him to her residence. She used Hook’s sword to wake him from his coma. She told him he was a blank slate and could therefore be what he had never in his life been – a hero.

Needless to say, the story is beginning to heat up on Once Upon a Time. The aforementioned character development still remains the series strongest points and now a new villain must be conquered to save Storybrooke. It will be interesting to see what happens Sunday, October 18th, when The Broken Kingdom airs. CrypticRock gives Siege Perilous 3 out of 5 stars.

ABC's Once Upon A Time, Fantasy, Lee Arenberg, Once Upon Time, Review
Print page
0 Likes