Once Upon a Time – The Bear and the Bow (Season 5, Episode 6 Review)

ABC’s Once Upon a Time continues along a compelling new story-line in their fifth season. Having one of their best episodes the week prior with Dreamcatcher, on Sunday November 1, 2015, episode six, entitled Bear and Bow premiered.  Directed by Ralph Hemecker as well as written by Andrew Chambliss and Tze Chun, The Bear and the Bow would come as fans waited patiently over the week for more insight into this season’s story. 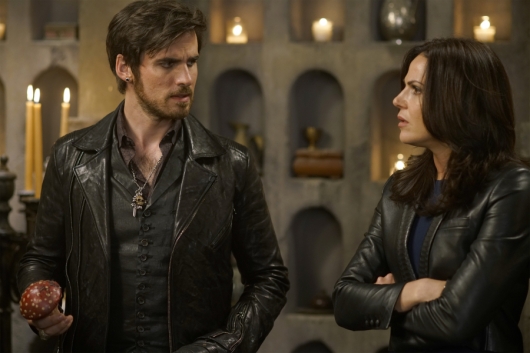 In a flashback of Camelot from six weeks prior, Merlin (Eliot Knight), Hook (Colin O’Donoghue), Belle (Emilie de Ravin), and David/Charming (Josh Dallas) storm Camelot’s prison to free Lancelot (Sinqua Walls). Protected by an unfamiliar magic, the prison baffles the mighty Merlin, but Belle presents to him a glance at a book which allows the sorcerer to overcome the obstacle. Merida (Amy Manson) asks for freedom, but as the rescuers free her, they show no concern for the wisps stolen from her by Arthur (Liam Garrigan).

In present day Storybrooke, amnesiacs Regina (Lana Parrilla), Snow (Ginnifer Goodwin), Charming/David and the gang prepare to contact Merlin using the Crimson Crown mushroom. However, only those chosen by the sorcerer could connect with him in this fashion. They ask Arthur, but the Once and Future “king with a dark secret” required privacy. Charming/David agreed and ushered the home team outside. Belle defended Rumplestiltskin (Robert Carlyle) , explaining that Emma was seduced by the darkness just like Rumple. Meanwhile, Emma continued her to attempt to make Rumplestiltskin into a hero. She needed someone worthy of pulling Excalibur from its latest stone and thought of her Dark One predecessor. To achieve this, Emma “Dark” Swan (Jennifer Morrison) ripped out Merida’s heart, thereby controlling her. Merida is instructed to make Rumple brave and  taunted Rumple with a chipped teacup symbolizing his relationship with Belle. With Merida off on another errand, Rumplestiltskin regretfully breaks Chip to cut the rope binding him in the forest. Instead of being upset by Rumplestiltskin’s absence, Emma seemed heartened and says, “It means Belle’s still someone he’s willing to fight for.” She squeezed Merida’s heart and ordered the archer to kill Belle. 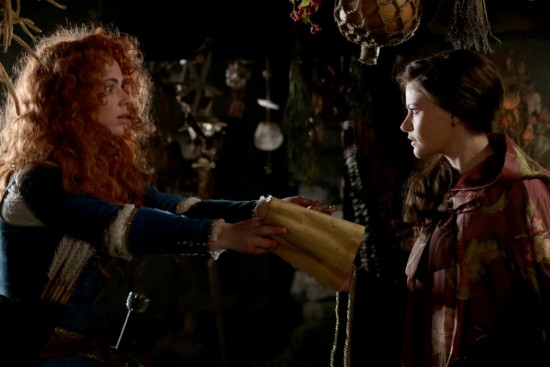 Back in Camelot, Merida and Belle bond over a discussion regarding  a boat stolen by Merida from King Arthur in the hopes of freeing her captive brothers. The Scottish clans take them captive to force Merida to cede the leadership. She feigned hearing something to allow the rest of the group to pull ahead and then knocked Belle unconscious. As Belle wakes and asks why Merida did not simply ask for help, the red-head explained, “I’m more of a hit first ask later kind of gal.” Further, she appealed to Belle with, “Would you give up everything you’ve fought for because a man said you’re not good enough?” Belle agrees to help Merida by creating the potion to change her fate and hopes to use the resultant bear strength against the rebelling clan heads.

In the Storybrooke library, Belle discoveres Rumplestiltskin huddled and in need of a talk. He had heard Belle when he was in the comma and says, “If it wasn’t for you, I wouldn’t even be alive. Thank you.” He explained Emma the Dark One’s complicated quest to turn him into a hero who could extract Excaliber. He admitted his cowardice, but Belle says, “Within, you are a hero.”

In Camelot, Belle gives a similar pep talk to Merida. Although she crafted the potion Merida requested, she administers a placebo when faced with the oppositional clansmen. The gals discuss culpability and forgiveness due to Merida blaming herself for her father’s death. After his passing, the clansmen revolted and insisted Merida marry one of them to unify the group. When she refused, they kidnapped her brothers and threatened to kill the lads. Merida had quoted her father, “Remember what you’re fighting for, and you’ll never miss.” The clansmen shoot at Merida’s triplet brothers, but Merida shoots all three arrows out of the air with one shot of her own. The clansmen kneel before her. and the women part ways, with Merida ironically hoping their paths would cross again. This makes one wonder what brought Merida to Storybrooke when the rest of her clansmates, including her triplet brothers, did not make the magical journey.

None the less, Merida in Storybrooke follows Emma’s orders by shooting at Belle. For a gal whose aim proved so true, she missed quite a bit. One would suspect her “heart” was not in the exercise. While Belle and Rumplestiltskin dodge arrows, Regina and the gang discovered Arthur’s duplicity. Magic mushrooms do not burn, apparently. Since Merlin only talkes to chosen people, the heroes ask teenaged Henry whose “heart of the true believer” had landed him a new title last season– The Author. 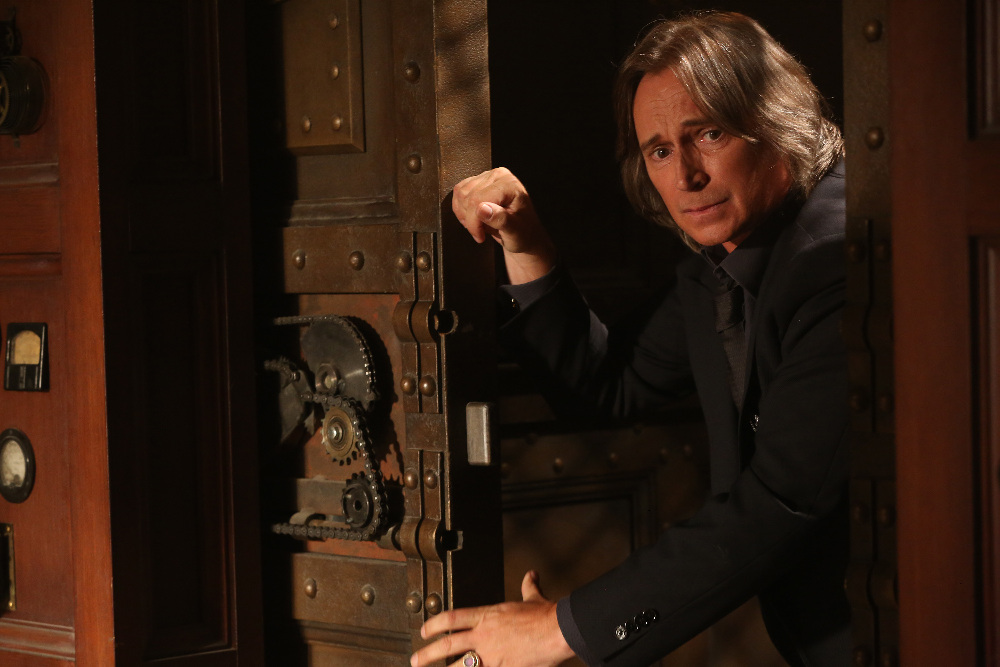 Rumplestiltskin and Belle flee Merida’s attacks by car as Belle realizes Rumplestiltskin’s intention and refuses to leave Storybrooke and the people there who counted on her. Rumple insists,“Emma will keep coming until she gets what she wants” as Belle replies, “Running away never made anyone a hero.” Merida traps Belle in the forest and takes the Mordu potion to transform her into a bear. Circumstances look bleak for Belle, but Rumplestiltskin broke through his cowardice and fought the bear.

Merlin visits Emma, reminiscing about an Apollo chocolate bar she had stolen as a “sticky-fingered girl.” He reminded Emma of the warning he had imparted, “Leave Excaliber alone. The fate of everyone you love rests on it.” As Rumplestiltskin apologizes to Belle for his shortcomings, she says, “It’s never too late” to be the man he wanted to be, the man she believed him to be. He struck a deal with Emma that he would pull the sword out if she restored Merida’s heart. Excalibur slid from its anvil with ease and Rumplestiltskin throws the sword at Emma’s feet saying, “A deal’s a deal” but threatens to stop her plan as she scoffs. There are plenty of heroes intent upon stopping her, but Rumplestiltskin puffed up, “None of them are me.”

Meanwhile, Henry attempts to use the Crimson Cap mushroom to contact Merlin and intends to rescue his mother from the dark magic she has succumbed to. The spell yields a kind of “voice mail” and says, “If you’re receiving this, things are worse than I feared.” He told them to seek Nimue before the Dark One found him and the message died away. This episode showcased Belle’s heroism and ability to see a person’s potential and hints at a showdown between Rumplestiltskin and Emma. However, several points seemed contrived. Cryptic Rock gives The Bear and the Bow 3 out of 5 stars. 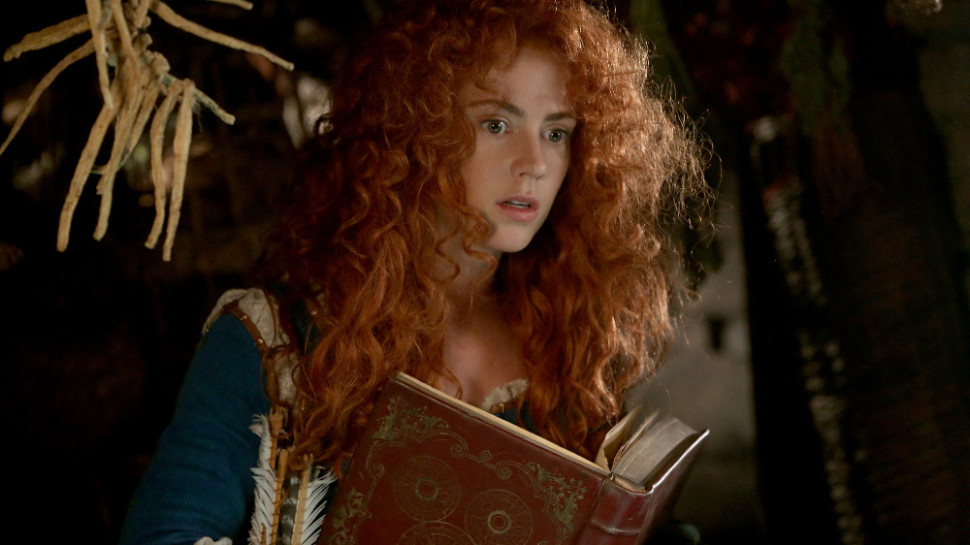 Amy Manson, Fairy-tale, Once Upon a Time, Show review, The Bear and the Bow
Print page
0 Likes