Once Upon a Time – The Broken Kingdom (Season 5, Episode 4 Review)

As Once Upon a Time fans know, fairy tales and legends walk the New England town of Storybrooke after a curse ripped them from their prospective lands. Season Five, Episode 4, The Broken Kingdom, aired Sunday October 18th on ABC. The episode begins with Arthur and Guinevere as children. Arthur declares his intentions of creating and ruling a kingdom with Guinevere as his queen, as the tree-imprisoned magician Merlin predicted. A town bully scoffs, saying nobody would bow down to the orphan boy who cleans the stables. Arthur’s fire to prove himself burns in his obsessive heart. 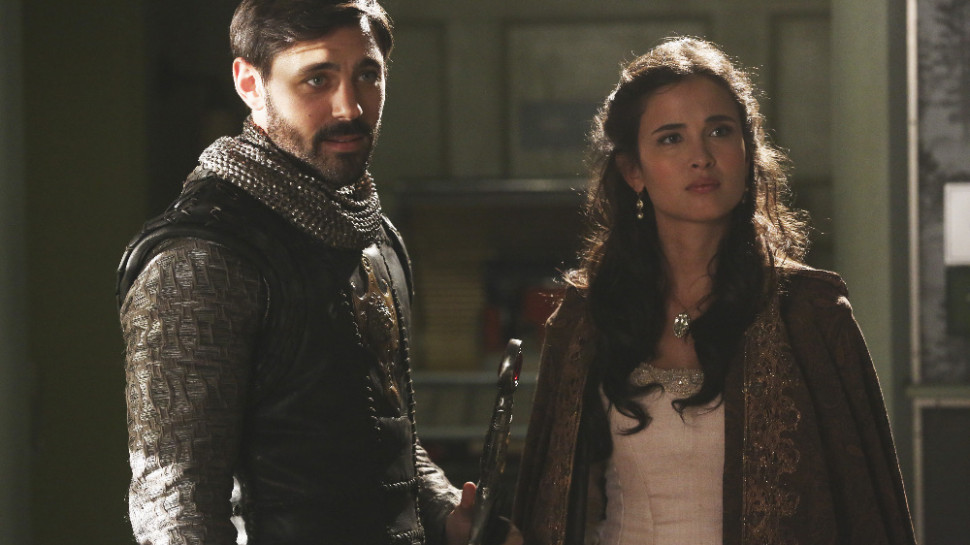 As an adult, Arthur pulled Excalibur from the stone, which verified his worthiness as king, but the sword is broken. Arthur fumes about a broken sword for a broken kingdom. He storms about, angry at Merlin and a perceived lack of confidence in the new monarch.

Time progresses to six weeks ago, before the cast of characters returned to Storybrooke sans memories. In Camelot, Arthur confides in Charming David of the necessity to restore Excalibur. He explains with the sword restored, the kingdom and its newest knight, Charming David, might not need Merlin’s ministrations, saying, “Who knows what he wants.” Meanwhile, Emma Swan hears the call of the dagger. The invisible representation of the Dark One’s power, Rumplestiltskin, taunts, “You’re the savior. Save yourself before it’s too late.” Regina wisely cast a protection spell over the alluring item, deterring Emma’s acquisition. She tells her love-interest, Captain Hook, of the personified bad influence driving her toward evil acts and magic use. “He’s in my head. I can’t get him out.”

Emma’s mother, Snow White, declares, “We can’t trust Arthur.” Lancelot’s warning has shaken her faith in Camelot’s king, though he gave no reason for the accusation. When Charming David defends his new friend and king-at-arms, Snow negates his argument, accusing, “You need to feel like a hero again.” 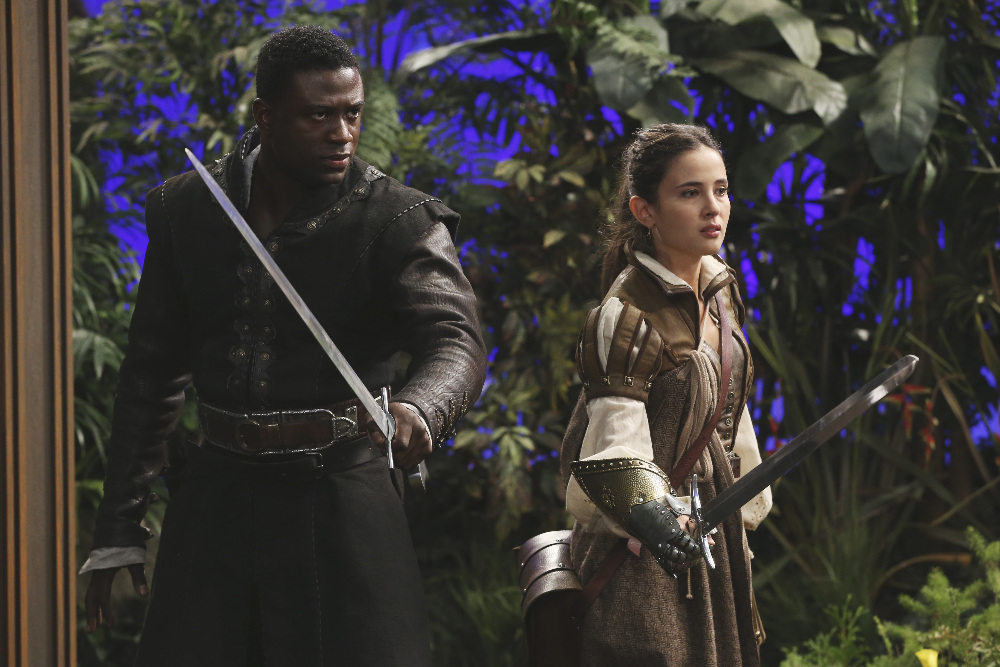 Five years earlier, Arthur holes up, studying Merlin’s books to discern the location of the Dark One dagger that is the broken tip of Excalibur and the physical representation (and controlling influence, much like a genie’s lamp) of the Dark One. His queen begs him to set aside his studies for the day and dance with her, “Your wife needs you.” Arthur promises to join the festivities forthwith, but when he does not, Lancelot endeavors to please the Queen; “Happy birthday,” he wishes. She sees through the rouse. Lancelot planned the party, not Arthur. Arthur emerges, a maniacal glow lighting his eyes. He has discovered the location of the Dark One’s dagger, and as it is only a day’s journey, he will embark.

Five years later, Charming David trusts Arthur. Seemingly against his wife’s wishes and the advice of their one-time loved friend, Lancelot, he presents the Dark One dagger’s box to the blue-eyed king and his strangely-accented queen. (Arthur and the other residents of the area have not such an accident, yet Guinevere, who also grew up in the town, possesses a sexy, distinctive accent.) He tells them that Lancelot lives. They open the box. No dagger.

In the five years previous Camelot, Guinevere and Lancelot set out with Merlin’s gauntlet to find Arthur’s secret weakness, the object of his obsession, which is the tip of Excalibur, otherwise known as the dagger of the Dark One. They interpret the symbols on the goopy Dark One well and unlock a secret land. Goopy dark tendrils attack Lancelot, but Guinevere fights it off. They kiss. They find the dagger, but magic protects it. Rumplestiltskin cackles on the scene, offering magic restorative dust that imparts the illusion of restoration; “What’s a little secret if it means getting your husband back?” He takes the gauntlet as the cost after he points out there might be a new motivation within the young queen’s heart. The pointed look at Lancelot with a comment about a broken heart conveys his meaning.

The scene returns to Camelot of five years previous, where Hook and Henry escort Emma to a secluded riding stable where Henry’s been visiting his crush, Violet. The young couple depart to horseback ride. Emma defines her inner turmoil to Hook, who knows too well the struggle of battling inner demons. He borrows a mount who is wary of Emma. The phantom Rumplestiltskin giggles with glee, “Pony’s smarter than the pirate.” Hook asks Emma to put her faith in him. They rush to a meadow speckled with pink hot house roses. The exercise chased Emma’s inner demon away. 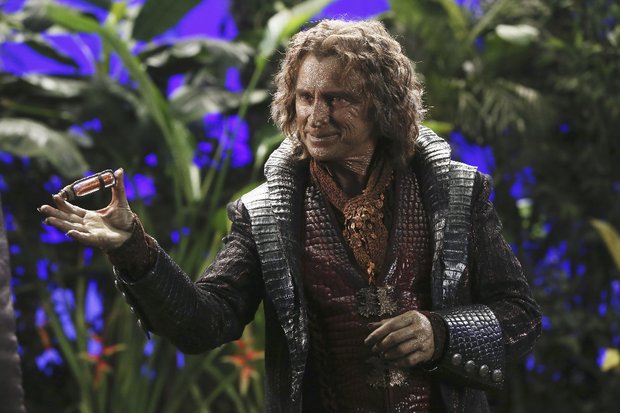 Snow and Lancelot revisit the vault of the Dark One in the hopes of protecting the dagger. Snow recognizes the place, though, from a previous vision where Emma crushed her heart. Arthur had followed them. He threatens their lives, demanding the dagger, and revealing his insane lust for power.

In the Camelot of the past, Arthur spies as Guinevere and Lancelot exchange a loving goodbye. Guinevere takes the magic dust to her husband. He takes and uses the sand to mend his marriage and his kingdom. Arthur explains to Guinevere he will prove himself to Merlin.

Outside of the vault of the Dark One, Snow and Lancelot face Arthur, who wants to snuff out the darkness. Snow points out the Dark One is her daughter. Charming David pops out of the vault to capture Arthur. The earlier exchange in Camelot proves a ruse concocted by the Charmings. They arrest King Arthur and take him to Granny’s diner. Lancelot recommends Guinevere as Camelot’s true ruler. However, the Queen and her entourage surround the Storybrookians and free Arthur. They throw Lancelot into a dungeon-like prison where he meets the Scottish royal from this season’s opener, Merida. Queen Guinevere blows magic dust on the Charmings, who return to the castle to tell Regina their best chance to make things right is to restore Excalibur.

In present day Storybrooke, the freshly-awakened-from-a-coma Rumplestiltskin/Mr. Gold explains he cannot be a hero. Dark Emma Swan goes outside to where Merida is strapped to her yellow Volkswagen Bug. She is told she will make Rumplestiltskin brave.

Many of the strongest characters of the show experienced no screen time in this installment. Many expectation for the episode were not met, yet, the fight has just begun. Because this episode dragged and never lived up to the rich Arthurian love triangle of literature, CrypticRock gives The Broken Kingdom 2 out of 5 stars.

ABC, Once Upon a Time, Show review, The Broken Kingdom
Print page
0 Likes