Once Upon a Time – The Price (Season 5/ Episode 2 Review)

Season five, episode two of ABC’s Fantasy/Adventure Once Upon a Time is titled The Price aired this past Sunday October 4th following a intriguing season premiere with The Dark Swan.

Rumpelstiltskin (Robert Carlyle: 28 Weeks Later 2007, Full Monty 1997) repeats the reminder that “All magic comes at a price” and every action exacts a sort of karmic toll. In the opening scene, Dopey (Jeffrey Kaiser: Psych 2010, Eureka 2012) crosses the border of Storybrooke and unwittingly shows what happens when resident crosses the town border when he becomes a tree. Upon seeing the result, Regina exclaims, “That’s new.” 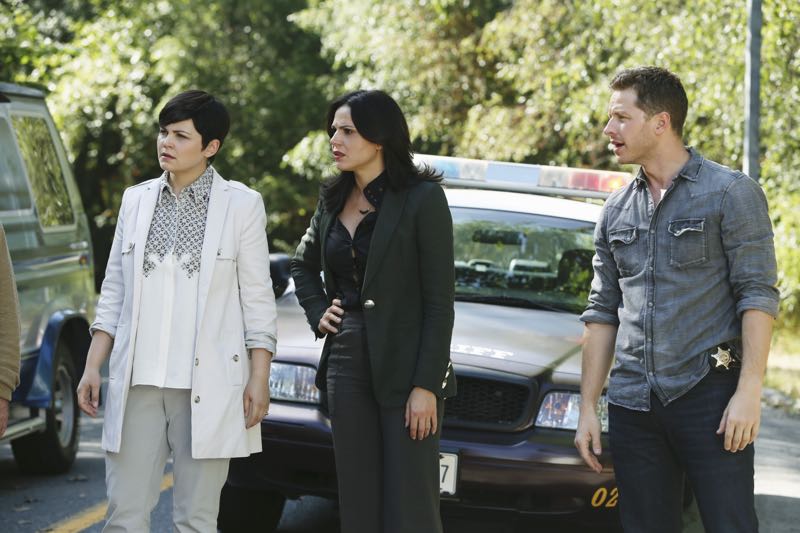 Six weeks earlier in Camelot, Arthur (Liam Garrigan: Strike Back 2012, 24: Live Another Day 2014) and Guinevere (Joana Metrass: Dracula Untold 2014, The Man from U.N.C.L.E. 2015) host a ball in honor of the Savior and her entourage. Regina (Lana Parrilla, Miami Medical 2010, Lost 2007) claims the title to prevent Emma from using magic. The Storybrooke gang fears calling upon the magical will strengthen the claim of the Dark One dagger on Emma, daughter of Snow White (Ginnifer Goodwin: Big Love 2006-2011, Killing Kennedy 2013) and Prince Charming (Josh Dallas: Thor 2011, Hawaii Five-0 2010). Thus they journeyed to Camelot seeking the powerful magician Merlin (Elliot Knight: By Any Means 2013, Sinbad 2012) in hopes that he can free the one-time Savior from the Dark One curse. Upon arrival at the castle, the Storybrooke residents  are shown to a courtyard where a twisted tree spreads its limbs. A powerful, dark magician trapped Merlin within the tree, and only the Savior can free him.

In modern day Storybrooke, the cast of fairy-tale characters ponder their latest bout of amnesia. Belle (Emilie de Ravin: Lost 2004-2010, Remember Me 2010) and Hook (Colin O’Donoghue: The Rite 2011, The Tudors 2009) discuss breaking curses and a true love’s kiss as she warns, “It is far easier to hate a Dark One than to love one.” Henry (Jared Gilmore: Mad Men 2009, Wilfred 2011), a young writer with the heart of a true believer, calls his mother’s name three times and a black-clad Emma Swan (Jennifer Morrison: House M.D. 2004-2012, How I Met Your Mother 2010-2014) appears in her Dark One glittering glory. He says, “I’m sorry we failed you.” as Henry’s adoptive mother, Regina, the reformed Evil Queen, intercedes. Emma warns, “There is a problem headed to Storybrooke that only a Savior can solve.” Arthur and his mounted knights thunder into town, pulled with the latest curse from their realm. At their reunion, Guinevere asks her husband, “Where’s Excalibur?” as a dark fairy-looking creature attacks and captures Robin Hood (Sean Maguire: Criminal Minds 2013, Bedlam 2011). 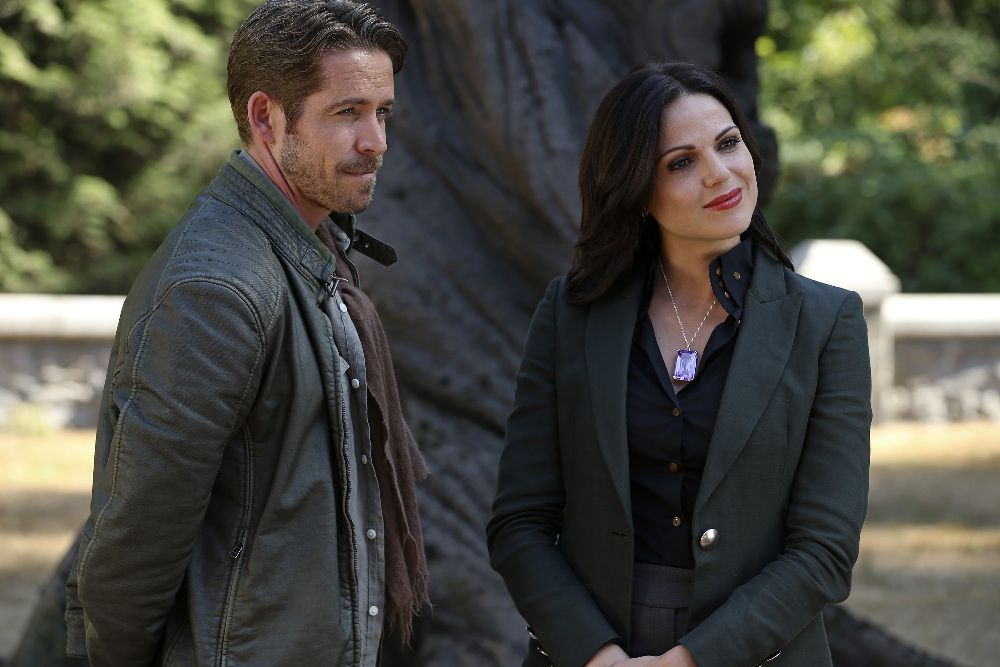 Meanwhile, Emma invites Hook into her new residence, number 710. They embrace and kiss, but Emma’s aspect remains unchanged. When Belle had kissed Rumple for the first time, he lost his Dark One powers. However, after the passionate lip lock between the Dark Swan and her reformed sea captain, Emma’s skin continues to glitter, and her hair remains whitened. Hook gasps, “Why didn’t it work?” Emma takes umbrage. “This is who I am now.”

The scene reverts to Camelot where Regina is given a pink amulet to denote her status as Savior. In private, she confesses her trepidation to her companions, wondering if she can overcome the bad deeds of the past. “They are expecting a Savior.”As Prince Charming teaches her to dance, the scene is observed by a sneaky knight using magical scrying.

Flash forward to an irate Regina looming over the comatose Rumpelstiltskin. “You made me like this.” Belle’s research names Robin’s attacker a Fury that has come to claim a life as the price for magic. This transaction will take place when the moon reaches its zenith, which means they have little time to save Robin Hood.

At the ball in Camelot, Grumpy (Lee Arenberg: Pirates of the Caribbean: Dead Man’s Chest 2006, Californication 2013) consoles Belle as she worries after the comatose Rumpelstiltskin. He points to her magical rose, telling her every remaining petal represents hope. As young Henry develops his first crush, the knight who used magic to observe the goings-on within the tower, Sir Percival (Andrew Jenkins: Wayward Pines 2015, Supernatural 2013), asks Regina for a dance. While they glide across the ball, he tells of a boy who returned to his village to find it in ruin, a laughing queen stepping from the flames. He recognizes Regina from her past and strikes a lethal blow, but it is intercepted by Regina’s beloved Robin Hood. Regina’s magic can not save him, so she begs Emma to help. An invisible Rumpelstiltskin appears to remind Emma, “She (Regina) asked for it. There has to be a price.” After healing Robin, Emma’s hand sparkles like crystal as Rumple taunts, “Tasty, isn’t it? The Darkness.”

Along a picturesque lake in Storybrooke, the Fury calls a boat from the mist to claim the unconscious Robin Hood. In desperation, Regina calls, “You want a life? Take mine.” The Fury acts as Snow White, Prince Charming, and Grumpy join her. Their combined sacrifice repels the Fury and the boat disappears into the mist. Robin wakes, saying to Regina, “I see you found a few believers.” 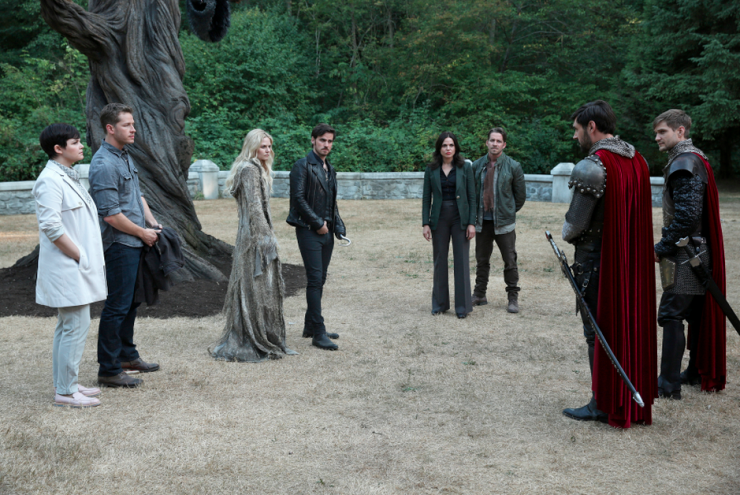 The Storybrooke inhabitants gather at Granny’s Diner. Henry teaches his new crush about jukeboxes and, concerning the current dilemma, Snow remarks, “If we win, Emma loses.” Arthur and Guinevere whisper, “Merlin tells us what happens, but he doesn’t tell us how.” Their goal is to retrieve the missing tip of Excalibur, which is the Dark One’s dagger.

Emma loiters in the street outside, unwilling to participate in the comradely evidenced through the diner’s windows. The phantom Rumpelstiltskin asks Emma, “Feeling left out? There’s more work to be done.” He explains threats to the Dark One’s power, which are family, friendship, magic, and loves that refuse to give up. Emma can do what no Dark One’s done and remove even remembered humanity from the Dark Ones. In the basement of her house, a stone entombs all but the hilt of the fabulous sword of destiny, Excalibur.

If Emma disregards Merlin’s warning from the season premiere and withdraws the sword, she will fulfill Rumpelstiltskin’s desire and snuff out the lights of goodness forever. But first, she must pay the price. Stay tuned as the saga continues with Siege Perilous scheduled to air Sunday October 11th. CrypticRock gives The Price 3 out of 5 stars. 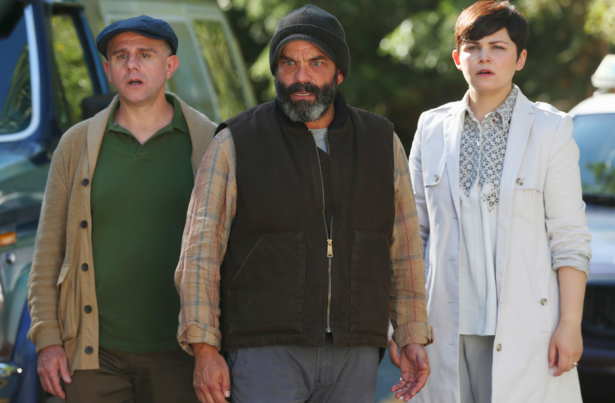