Opeth & In Flames team up for Co-headlining North American Tour

Swedish metal leaders In Flames and Opeth are teaming up for a 15-date North American tour titled Communion of Sirens kicking off December 3 in Chicago and runs through December 21 in Toronto. Red Fang will serve as support.

In Flames frontman Anders Friden stated “I met [Opeth guitarist] Mikael [Akerfeldt] for the first time in 1998 during the recording of Opeth’s album My Arms, Your Hearse,”.  He also stated “I was working in the studio and we’ve been friends ever since. Now 16 years more beautiful, we release albums in the same cycle and it’s with great honor and pleasure that In Flames share stage with our friends and fellow countrymen in Opeth.”

Akerfeldt concurred, saying, “We are delighted to return to North America to tour our latest album Pale Communion. This will be the first of two North American Tours and the fact that we are teaming up with our old friends In Flames for this co-headline tour means that we can get to play some large venues and present our new stage show. I am also looking forward to drinking expensive whiskey with Anders on his account.” 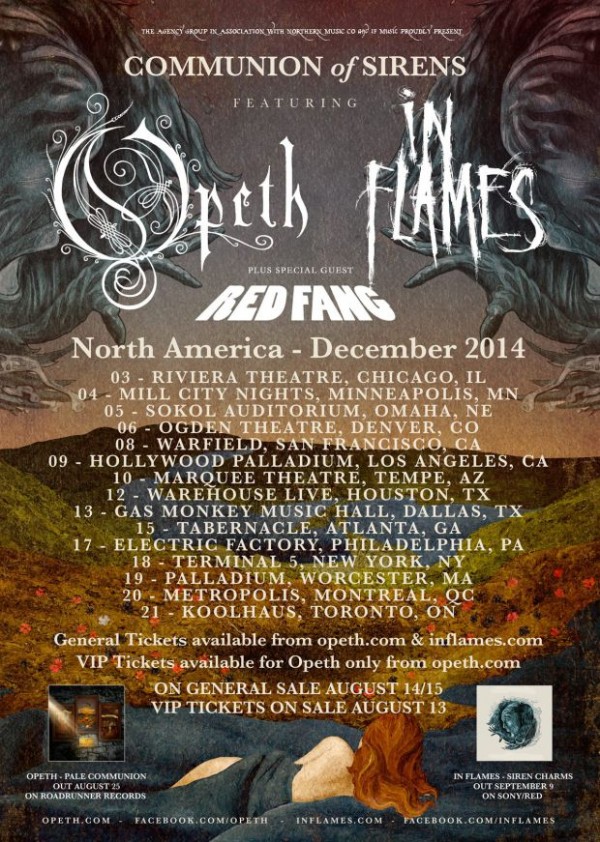 In Flames will release their eleventh album Siren Charms on September 9th.