Claire either really is a Witch or there is some lapse in time viewers are not aware of because she was in the dog house in a major way at the end of last week’s episode. But, the rift between the Frasers seems to have mended, with Jamie proving he is the perfect fictional husband (swoon).  Outlander’s sixth episode, Best Laid Schemes, also provided some foreshadowing, as the show likes to do, and drew parallels once again to the season opener, delivering some heart-wrenching moments. 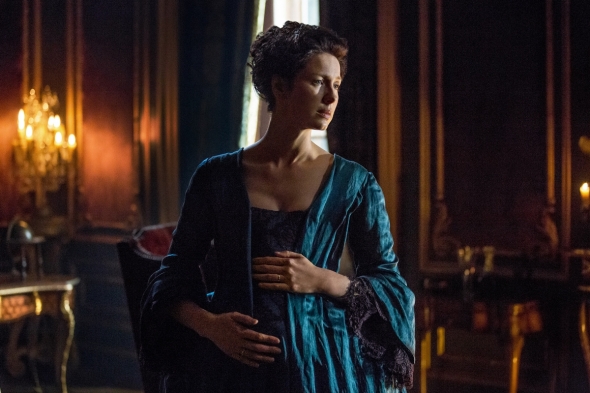 We find Jamie deep in thought at the beginning of the episode, as Murtagh marches in, eager to talk about plans for Jamie’s duel with Black Jack Randall.  But Jamie quickly stops Murtagh to tell him he has called the duel off, with his only explanation being that it is “complicated.” After Murtagh demands to know what is going on, clearly frustrated that he is still being left in the dark, Jamie lets Murtagh know he has a good reason for his actions. Yet, it is becoming evident Murtagh is going to have to be brought into the inner circle that is Jamie and Claire sooner rather than later.

At L’Hôpital, a noticeably more pregnant Claire continues to volunteer her nursing skills and is asked to help Monsieur Forez prepare a body for burial so that he can warn her, with a graphic description of drawing and quartering, that the lives of anyone who is a practitioner of the dark arts, or those associated, is in danger. Claire realizes she must warn Master Raymond, who at first is not concerned, but Claire assures him this Witch hunt will end in bloodshed, and Master Raymond promises to leave town, letting Claire know he will see her “in this life or another.” It is becoming more evident that Master Raymond knows more than he is letting on and that we will, in fact, see him again.

Once Claire arrives home, she is treated to a much-needed foot massage by Jamie and asks how he knew that is exactly what she needed. But, what most fans are wondering in this moment is, why is Jamie even talking to Claire? Did they not just have the blowout of the century? After Jamie lets Claire know Jenny told him about how helpful a foot rub is during pregnancy (fans still miss you Scotland!), he reveals his real reason for promising Claire to hold back from killing Black Jack. Jamie explains that he does not owe her a life because he has saved hers just as many times (damn straight). 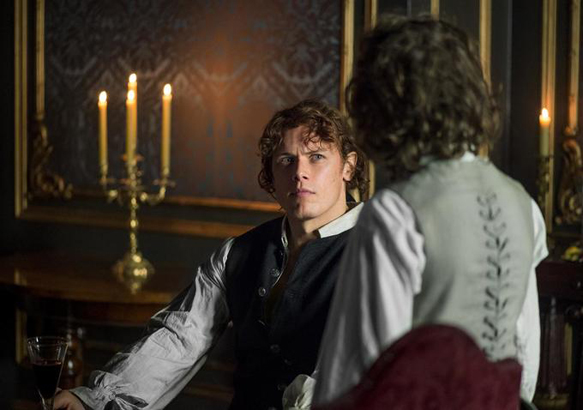 But, in realizing how every effort they have made thus far has not really had the desired effect, there is a likely chance they will fail, and he wants to ensure her life and the life of their “bairn” is protected. So, in true Jamie fashion, he sacrifices his need for vengeance to secure Frank’s existence so Claire has someone who loves her to return to in the event things go south. It is a scene that carries a deep emotional impact on the viewer, knowing from the events of the first episode, that they do not succeed and she does return to Frank.

Next, we see Claire formulating her special smallpox cocktail to thwart Prince Charles and St. Germain’s wine deal. She tests the concoction on Jamie as Fergus observes, but Murtagh still thinks they should slit the prince’s throat. Claire argues that his death would only make Charles a martyr. Soon, Claire’s mixture begins to effectively work on Jamie, but Murtagh is not impressed and questions the games they are playing. Jamie and Claire then agree that it is time to tell Murtagh the truth and Jamie does just that. Murtagh is not too happy that Jamie kept that information from him and gives him a solid punch in the face to prove it, but has a somewhat different reaction with Claire.

After Jamie leaves with Fergus to sabotage the Comte’s wine, Claire finds Murtagh looking at a piece of paper with the years of the future she has lived through. He asks about her knowledge of the outcome of the Jacobite rebellion and confesses that he would not want to carry the burden of knowing the future. It is a sweet moment between the two, showing Murtagh’s respect and awe of Claire.

No good deed goes unpunished, and though Jamie and Fergus succeed in faking smallpox amongst the Comte’s men, it does not come without consequences.  Jamie is summoned to Maison Elise where Charles and St. Germain are waiting with news of a “mysterious illness” among the Comte’s men. Charles presses Jamie to transport the wine to Le Havre himself with the company of the Comte, whose mistrust of Jamie is at an all time high.  There is a great moment here where the Comte and Jamie rise and face each other in a stare battle that is rife with tension.

The Frasers are now faced with yet another scheme they must plan in order to foil the wine shipment, but as Claire notes, “bad things tend to happen when we’re apart.” Her sense that all of this underhanded behavior cannot end well makes her nervous, as it should. Jamie does what he can to reassure her, saying that they always find their way back to each other, and it is another moment that tugs at the heart as viewers are aware of their impending separation. We are also given a tender moment of bonding as the couple’s baby kicks and Jamie tells the child how he cannot wait to meet it, a moment that is bittersweet once the baby’s fate is put in question at the end of the episode. 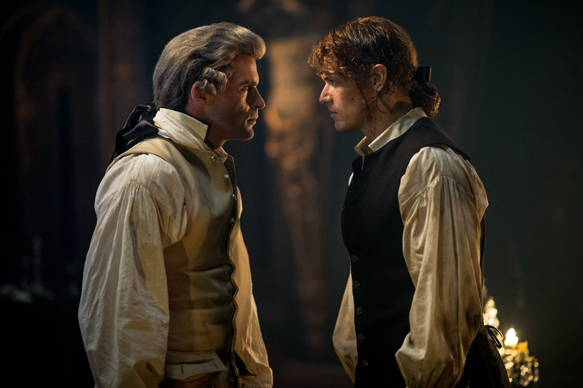 It is then time for plan B, which places Murtagh in the role of a French bandit. Claire and Jamie decide to dress Murtagh, along with some other hired men, in disguise to stage an attack. The attack/robbery is successful after Jamie “saves” the Comte, who is in a standoff with Murtagh, guns pointed at each other. Once the wine is stolen, Murtagh travels to Portugal to secretly resell the merchandise.  The Comte is obviously suspicious of Jamie, revealing that the timing of the attack seems to be more than mere coincidence. Yet, Charles comes to Jamie’s defense, pointing out the group of men sounds like “Les Disciples,” and that Jamie put his life at risk to save the Comte.

Meanwhile, Claire continues to work at the hospital to the detriment of her child. Mother Hildegarde notices Claire is not feeling well and orders her to lie down, which gives her the opportunity to notice blood on Claire’s ankles. Although Mother Hildegarde assures Claire the bleeding is normal, there is concern etched on her face and she insists Claire spend the night at the hospital.

When Claire returns home, she learns that Jamie, along with Fergus, went to Maison Elise to help Charles by settling his bill. viewers also know that while Jamie is busy trying to aid the prince, Fergus roams through the brothel and finds himself in what is seemingly Black Jack Randall’s room, the lavender oil and red coat hanging clear indications. Though fans are not yet given an account of what happens to Fergus in that room, we can infer that it is the reason Jamie leaves Claire a note saying, “I am sorry, I must,” which she finds once she hears the full account from Suzette.

Against all common sense and feeling betrayed, Claire, still weak, runs off to Bois Boulogne to find Jamie, but when she gets there, Black Jack and Jamie are already in the midst of a duel. There is nothing she can do to stop the two men from fighting, knowing it could risk Jamie’s safety, so she watches from the woods to see which of her men will die, “Jamie or Frank.”  The men struggle to fight each other and Black Jack taunts Jamie by asking how Claire could forgive him, but Jamie gets his revenge, not by taking Randall’s life, but by what appears to be a stab to Randall’s privates.

Unfortunately, any sense of relief is fleeting for Jamie, who notices Claire in the distance once she screams out in agonizing pain, and we see her buckle over, blood pouring to the ground. As Jamie yells out to Claire, he is surrounded by the gendarmes. Claire, who is most likely about to lose her baby, falls into a delirious state as she is carried away by her servant, Magnus. Once again, Jamie and Claire are separated, but when they find their way back to each other, they will have to face a new set of obstacles and devastation. CrypticRock gives Best Laid Schemes 4 out of 5 stars. 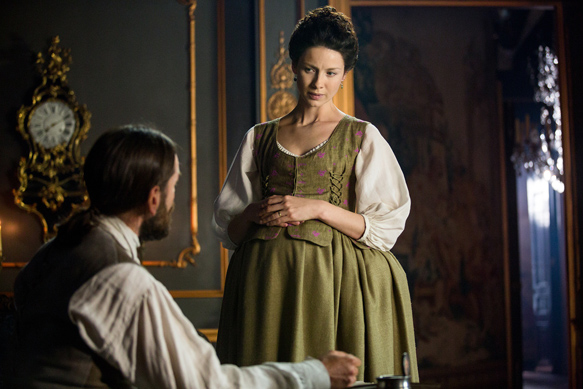