Outlander’s second season came to a close Saturday, July 9th, with a supersized, 90-minute finale, Dragonfly in Amber. The episode brought us full circle, showing the events that led to Claire’s return to the 20th century and her future timeline twenty years after she left Jamie back in 1746. Viewers meet the now grown-up daughter of Claire and Jamie, Brianna (Sophie Skelton: Casualty TV series, So Awkward TV series) and see a much older Roger Wakefield (Richard Rankin: From Darkness TV series, The Syndicate TV series) as Claire revisits her past when she returns to Scotland for the first time in twenty years. 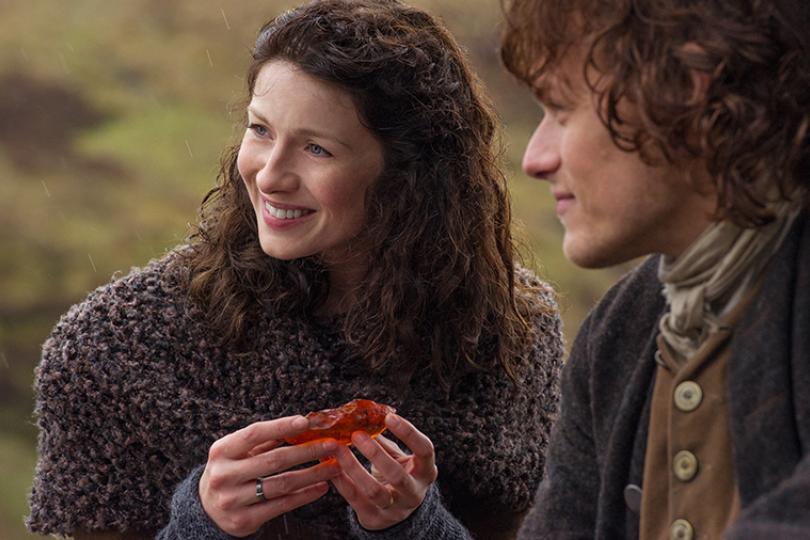 Though the final episode brings fans to the day that has been the basis of Jamie and Claire’s storyline throughout the season, The Battle of Culloden, viewers do not actually see the battle happen. Jamie makes one last ditch effort to convince Prince Charles not to move forward, but Charles brushes off Jamie’s plea by comparing him to the apostle, Thomas, who doubted Jesus’ resurrection. Time is running out and it seems all hope is lost, until Claire suggests assassinating Charles, if only a little too late. She tells Jamie they can poison Charles by putting yellow jasmine into his tea, the same poison she gave Colum.

Unfortunately, Dougal overhears Jamie and Claire discuss the murder plans and is overwhelmed with emotion after learning of the betrayal of his nephew. He draws his sword and tells Jamie he will kill him quickly for his mother’s sake. Though Jamie has no desire to fight his uncle, he is unable to reason with him and the two go head to head. After some assistance from Claire, as she hits Dougal over the head with a chair, Jamie is able to pull his dirk on Dougal. The men struggle, but Claire comes to Jamie’s aid again and helps force the dirk into Dougal’s chest. Rupert soon walks in and is ready to avenge the death of his war chieftain, but Jamie begs for two hours before he answers for his crime.

Jamie works quickly to sort his affairs. After telling Murtagh he has just killed Dougal, Jamie pulls out the deed to Lallybroch, which he has signed over to his nephew. He needs Murtagh and Claire to sign the deed as witnesses, and after they do, he sends Fergus to deliver to deed to Lallybroch, ensuring Fergus is safe and in no danger of dying during the battle. Jamie and Claire have both come to see Fergus as their adopted son and it is an emotional goodbye as they all realize they may never see each other again.

Next, Jamie instructs Murtagh to see that the Lallybroch men leave Culloden and go home. Murtagh agrees to see them off, but insists on staying to fight by Jamie’s side. Claire’s safe return “home” is Jamie’s final loose end. With time running out, Jamie ushers Claire away to bring her to Craigh na Dun. Claire resists, not wanting to leave Jamie, hoping they can escape.  But, Jamie knows there is no way out and that his fate is to fight and die at Culloden. He convinces Claire to keep her promise to go back to Frank when he reveals he knows she is pregnant; “This child will be all that’s left of me, ever,” he says before they ride off to the stones, and it is heartbreaking.

When Claire and Jamie arrive at Craigh na Dun, Claire tries to convince Jamie to go through the stones with her, but he tells her even if he could, it is not his place. If not, he promises to find her even if he has to suffer two hundred years of purgatory for his crimes. As he confesses his crimes, he tells Claire, “But when I stand before God, I’ll have one thing to say to weigh against all the rest. Lord, you gave me a rare woman, and God, I loved her well.” Knowing these are their final moments together, the two have sex one last time.

Before Claire leaves, she gives Jamie her wedding gift from Hugh Munro, a dragonfly in amber, and Jamie gives Claire his father’s ring. Claire promises to name their child after Jamie’s father, Brian, and as Jamie holds Claire, he dances her backward toward the stones in a devastatingly stunning visual. Claire tells Jamie she loves him and he responds, “And I you,” before turning her around and holding her hand as it reaches forward to touch the stones. With a clenched jaw and a single tear, Jamie says goodbye, before Claire is gone, and viewers are all in a puddle of tears. 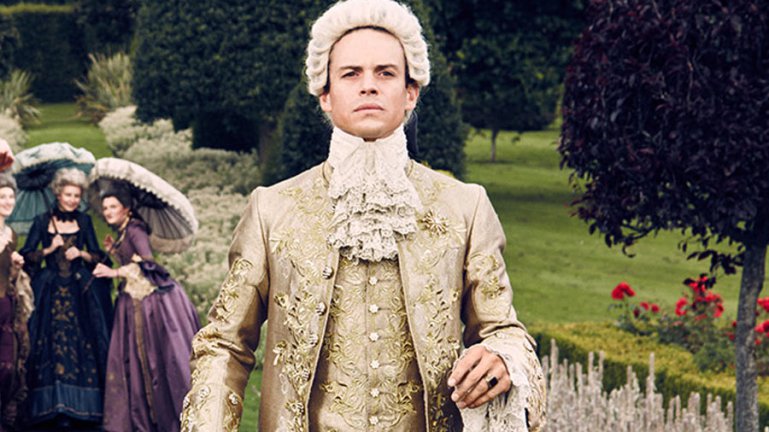 Though we see the moments leading up to the Battle of Culloden, Outlander’s final episode spent the majority of its time in 1968 Scotland as Claire, along with her now twenty-year-old Harvard history major daughter, Brianna, returns to Scotland to mourn the passing of Reverend Wakefield. Claire, now a surgeon and sporting some serious Jackie Kennedy inspired style, greets a grown up Roger Wakefield, who is instantly attracted to Claire’s statuesque, red-headed daughter. Claire asks after Mrs. Graham, who fans learn has passed, and it is also revealed that Frank is also no longer alive. This allows Claire to revisit memories she has not reflected upon in a very long time, especially since Roger offers to let Claire and Brianna stay in his home so they do not have to drive back to London late at night. It also gives Roger a chance to get to know Brianna and show her the Scottish Highlands.

Before Roger takes Brianna on a sight-seeing adventure, he finds Claire having a drink in the sitting room and joins her. The two chat and Roger confesses that he is actually a MacKenzie, which prompts Claire to look into his lineage further. The next day, Roger takes Brianna to FortWilliam, which gives Brianna the chills, as it should since her father was brutally flogged there 200 years prior. Brianna also opens up to Roger, asking him about an “incident” she believes took place many years ago. Roger does not remember much about Claire and Frank from his childhood, but agrees to check the Reverend’s journals with Brianna for more information.

Meanwhile, Claire takes a ride down memory lane, literally, returning to her former home, Lallybroch. This sequence is one of the most haunting and beautiful in the entire episode. The music by Bear McCreary heightens the emotion dramatically as Claire sits on the steps in front of Lallybroch’s entrance and we hear a voiceover of her memories, eventually seeing a vision of Jamie standing underneath the archway. Claire then stops by the local records office where she accesses the deed to Lallybroch and gets confirmation that it was passed to Jamie’s nephew, but before she leaves, she has the records clerk run a genealogical search on Roger.

That evening, Brianna, plagued with concerns about her mother’s true feelings for the man that raised her, asks Claire if she ever truly loved Frank. Claire responds by telling Brianna that she did, but Brianna still wants the truth about Frank and Claire’s past. The next day, Brianna accompanies Roger to the university where he teaches and ends up meeting Gillian Edgars, who will eventually become Geillis Duncan once she travels through the stones.

While Brianna witnesses Gillian’s nationalist speech that speaks of Bonnie Prince Charlie, Claire visits a museum that is centered on the Battle of Culloden and eventually finds the dragonfly in amber she left behind with Jamie beneath a glass case. After her stroll through the museum, Claire takes a trip to Culloden Moor and visits the Clan Fraser grave, where she talks to Jamie and tells him about their daughter, finally saying the one thing she could not twenty years ago, “Goodbye.” 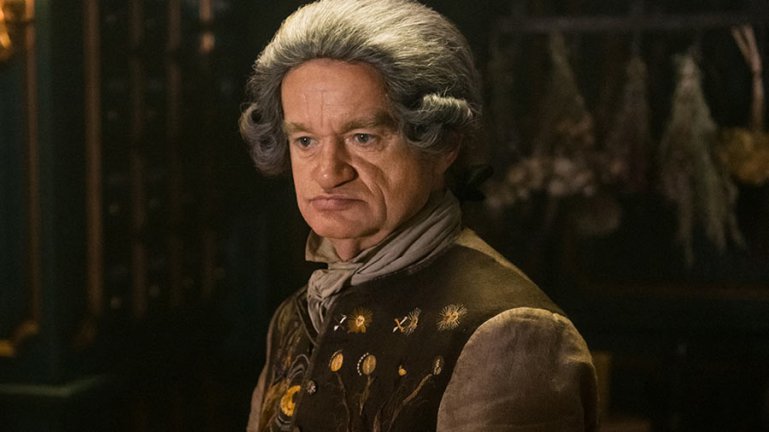 Claire may have been able to finally let go of Jamie’s ghost, but Brianna soon finds the clippings about her mother’s disappearance and does the math, realizing that Frank is not her biological father. She confronts Claire, who is finally able to tell her daughter the truth. Unfortunately, the truth sounds a lot like crazy once Claire tells Brianna about her tall, red-haired, highlander father from the 1740s. Brianna, filled with anger, leaves and goes to a pub with Roger, where she once again runs into Gillian who reveals she is leaving to further her cause elsewhere. Claire, meanwhile, finds Gillian’s flier and recognizing her as Geillis, visits her home where she finds Gillian’s husband and some notebooks containing time travel theories.

After looking through the notebooks Claire took from Gillian’s home, she learns that Gillian believes she needs a human sacrifice to go through the stones and resolves to stop her from going back in time. Later, Brianna returns, and though she is still skeptical of her mother’s story, asks Claire to tell her more about Jamie. The mom and daughter bonding does not last long once Claire asks Roger about Gillian. Even though she wants to save Gillian/Geillis as she was saved during the witch trial, she realizes in doing so she might be putting Roger’s life in danger since Claire has found that he is actually a descendant of the child conceived by Dougal and Geillis. Roger encourages Claire to at least warn Gillian and convinces Brianna that this would be a good way for Claire to face her delusions if that is, in fact, what they are.

All three drive to Craigh na Dun and find Gillian, who has just burned her dead husband’s body. Before they are able to stop her, she runs to the stones and disappears. Brianna quickly comes to terms with the fact that her mother was not lying and is not crazy. She does not understand but she believes Claire’s story. After Roger returns from notifying the police, Brianna urges him to reveal a tidbit of information he has uncovered. Jamie Fraser did not die at the Battle of Culloden. Upon hearing the news that Jamie survived, Claire knows there is only one thing she can do, she must go back. As the sun rises over Craigh na Dun, Claire looks on to her future, which she knows will be a return to the past. CrypticRock gives Dragonfly in Amber 4.5 out of 5 stars. 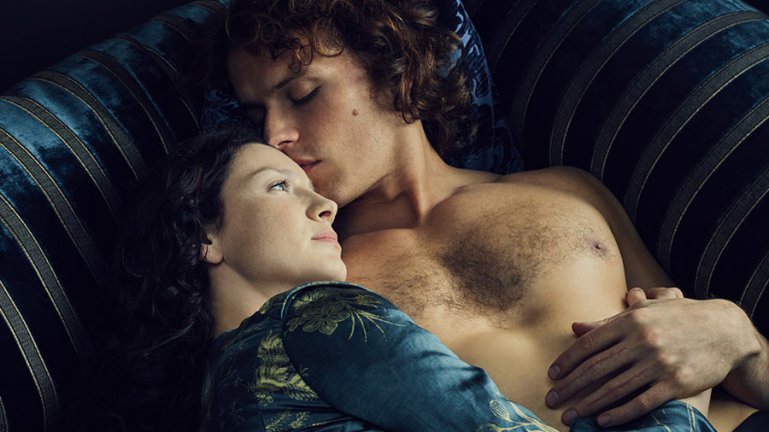 Creepshow (Season 2 Review) Mogwai – The Love Continues (Album Review)
Like the in-depth, diverse coverage of Cryptic Rock? Help us in support to keep the magazine going strong for years to come with a small donation.