Heartbreaking does not even begin to cover it. Outlander has always handled themes a bit differently, allowing its audience to experience and connect to the emotions of its characters at a deeply personal level, never shying away from the bad and the ugly. The seventh episode of Outlander’s second season, Faith, which devastatingly portrays rape and loss, is gut-wrenching and powerful, at times difficult to watch, and the show’s best so far. 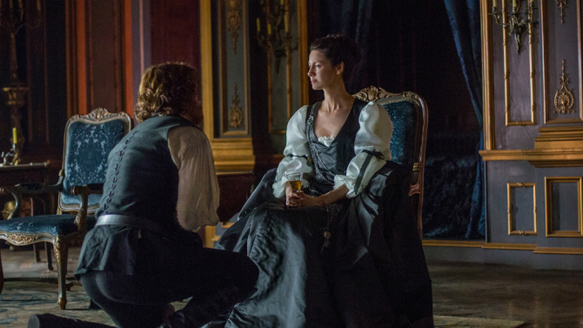 Before the show reveals the fate of Claire’s baby, we are shown a glimpse of her in 1954 Boston, tending to her red-haired daughter in a library. It is a reminder that Claire does become a mother, and it allows the audience to hold on to hope as we witness the tragic events to come. As the image of a heron reminds Claire of Scotland, fans are transported back to L’Hopital where Monsieur Forez and Mother Hildegarde are doing their best to treat a blood-soaked Claire. After a period of time, she awakens, feeling her flattened stomach and calls for her child. Mother Hildegarde breaks the sad news that Claire’s baby was born dead, and we see Claire’s heartbreak as she sheds a single tear.

As Claire suffers from fever, Mother Hildegarde tries to ease her suffering by letting her know she illegally baptized Claire’s baby and named her Faith, so that the baby could be buried in hallowed ground. Claire asks about Jamie, but there has been no word and her disdain for his betrayal continues to boil along with her ravaged body. Claire’s situation is so dire that Mother Hildegarde calls in a priest to take Claire’s final confession, but Claire ignores this, saying her sins are all she has left.

Later that night, Claire is greeted by a hooded man, which we discover is Master Raymond.  He is there to heal Claire, asking her what she sees. She confesses to seeing blue wings and he explains that the blue is for healing and the wings are to carry her pain away. We learn from a voiceover that Claire has puerperal fever, which Master Raymond cures by removing the source of the infection. Before he leaves, Master Raymond confirms that the king is out for blood, but he came back to help Claire because that is what friends do, reiterating that they will see each other again.

Mother Hildegarde is called over and believes Claire’s recovery to be a miracle. Claire asks about Jamie again and this time Mother Hildegarde reveals he is locked in the Bastille for dueling, and that he would have suffered a more sever penalty had Black Jack not survived.  This revelation provides some relief as Claire realizes Frank’s existence remains intact. But, it is a small comfort after everything she has lost.

Claire finally comes home after Fergus brings her flowers and asks her to return. In a profound scene where Claire is greeted by her entire household staff, Caitriona Balfe stuns as she portrays Claire’s shattered soul, trying to maintain her composure as she walks by each person. That night, Fergus brushes Claire’s hair and she seems to be going through the motions, until she notices Fergus freeze at the sight of a perfume bottle. She asks him what is wrong, but he replies that it is nothing and runs out of the room. It is only later, after she breaks down sobbing from her own anger and grief that she hears Fergus whimpering from his room. She finds Fergus suffering from a nightmare and wakes him, asking if he wants to talk about it. Fergus explains that it is not just a nightmare, but he is too ashamed to speak about it. After some prodding, Fergus finally opens up to Claire, telling her that he was sexually assaulted by Black Jack, as viewers are shown the horrific moment in flashback.  Fergus blames himself not only for what was done to him, but also for causing Jamie to end up in the Bastille. 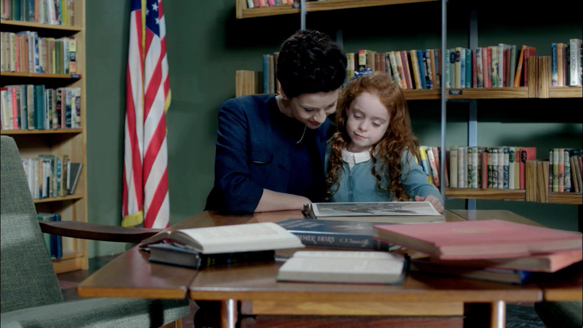 Now that Claire knows the reason for Jamie’s betrayal, she is determined to get him released. She goes to Mother Hildegarde to ask for help, but is warned that there is a price of a sexual nature to pay for what Claire is asking. Claire says she will add to the list of things she has lost and goes to Versailles with her poison-detecting necklace in tow. Claire is all business when she gets there as the king entices her with hot chocolate and oranges. He tells Claire that he cannot grant a favor without asking for something in return. But, before any carnal knowledge ensues, Claire is led to a hidden room where Monsieur Forez stands nearby. The king confesses that he needs the help of “La Dame Blanche” in determining punishment for two suspected Dark-Arts practitioners.

It is then that Master Raymond and the Comte are ushered in. Both men are being charged with sorcery based on evidence collected from Master Raymond’s shop and the Comte’s home. The king believes Claire, as “La Dame Blanche,” is in a unique position to judge these men because she has a “pure heart that cannot lie.” Claire uses this opportunity to implicate that the Comte is associated with Les Disciples. He denies the accusation, but does reveal that he was responsible for poisoning Claire, and claims she is a Witch because she did not die. Claire uses this declaration to admit to being a White Witch, using her powers for good.

The king wants to make an example out of at least one of these men and brings out a serpent to see which man can handle the snake without being bitten. Claire offers an alternative.  She suggests concocting a poison for both men to drink to see which of them survives. If both men survive, they will be released. She uses the bitter cascara that was confiscated from Master Raymond’s shop and has him drink first. While Claire was not willing to sentence the Comte to death, Master Raymond is all for it, poisoning the cup while bent over in a fit of pain. When he hands Claire the cup and she brings it over to the Comte, the color of her necklace changes to black, and both she and the Comte know his fate.

The Comte has no choice but to drink and there is anger and fear evident in his eyes. Before he takes the fatal sip, he tells Claire he will see her in hell, and makes his dramatic exit, writhing on the ground as he dies. The king allows Master Raymond to keep his life, but banishes him from France, but he is also not done with Claire. He leads her back to his bedroom where he then asks for payment, pushing her down on the bed to pay her debt. Thankfully, the moment is over quickly and Claire is not only granted Jamie’s release from the Bastille, but also his pardon with the English crown, allowing the Frasers the ability to return to Scotland. 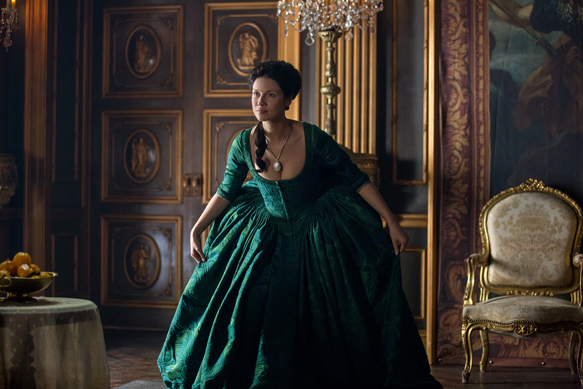 Jamie returns home, slowly walking up the stairs to find Claire, who is unable to look at him. Jamie, tattered and sporting a beard, asks whether their child was a boy or a girl. Claire finally tells him they had a girl and that Mother Hildegarde baptized her Faith, and had her buried next to the convent. He begins to explain his reason for breaking his promise, which Claire tells him she already knows. Jamie asks if Claire hates him for it and she finally looks at him and answers, “I did hate you.” She begins to tell Jamie about what happened in the hospital, recounting the moment she met their daughter. We see her holding the lifeless body in her arms, counting its fingers and toes as most new mothers would. This moment is crushing as we see Claire describe the baby’s resemblance to Jamie with its slanted eyes and copper hair. We then see her singing to her child, clearly unable to let her go. Catriona Balfe gives a tour de force performance throughout this episode, but her raw emotion in this scene is extremely touching, and should garner plenty of award attention.

Louise arrives, holding her hands over her own pregnant belly, as she watches Claire and sympathizes. Louise eventually persuades her friend to let her baby go so it can be buried, leading Claire to finally accept that her baby is gone as she breaks down in anguish. Claire realizes that she is as much to blame for this as anyone and takes responsibility for putting Frank above her family. After admitting that she slept with the king to free Jamie, he understands, claiming they both did what they had to do to save each other. Claire wonders how they can ever be the same and Jamie tells her they cannot, that the only way they can live with it is to carry it together, and gives Claire hope that though they have lost a child, by the grace of God, they may be given another.

France has proven to be a toxic environment for Jamie and Claire and when Claire asks Jamie to take her home to Scotland, he looks at her with relief and agrees. Before they leave, they visit Faith at the cemetery and leave a piece of Scotland with her, as Jamie places the apostle spoon of St. Andrew on her grave. CrypticRock gives Faith 4.5 out of 5 stars. 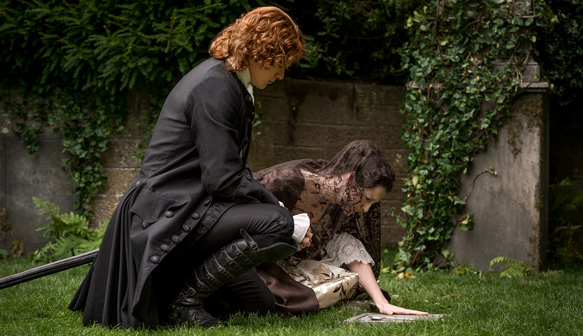