After leaving Beaufort Castle, things start to get real for Jamie and Claire in Outlander’s ninth episode, Je Suis Prest (French for “I am ready” and the Fraser motto). They have reached the training ground where they are assembling men to fight in the impending war against the British, and along the way lost many of Lovat’s men, who did not want to be forced to fight for something they do not believe in. Claire’s idea to flee to Ireland sounds pretty good right about now because there is a lot of work to do to get these men, who are mainly farmers, in fighting shape. Luckily, Jamie is in full leader mode, using his knowledge as a soldier in France and his trusted sidekick, Murtagh, to enforce his tactics. And, though there are some happy reunions, the return of Dougal MacKenzie only offers a power struggle between the war chieftain and his nephew. 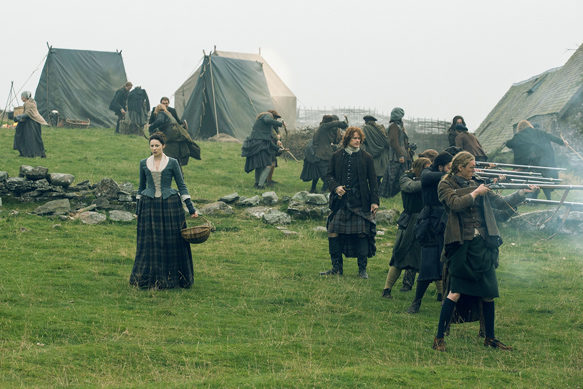 Once Jamie and Claire reach the training ground in Crieff, they are greeted by Murtagh, who is surprised to see Lovat’s men, and Fergus, who is overjoyed to see his surrogate parents.  They also see the familiar faces of Rupert MacKenzie and Angus Mhor, who have come to join Jamie’s men. It is a heartwarming moment to see everyone reunited until corn grinder Dougal MacKenzie shows up. Dougal, well known for his support of the Jacobite cause, is also there to greet his nephew, and though it is clear both Jamie and his uncle are happy to see each other, Claire is not so enthusiastic.

After Dougal reveals he has come to join Jamie’s men against Colum’s wishes to remain neutral, it becomes clear Dougal and Jamie do not share the same vision in their approach to war.  Jamie knows the men need proper training to acquire the skills essential for combat, but his uncle follows a different school of thought, claiming a Scotsman is worth ten redcoats. Jamie stays firm, even though Dougal thinks they should not waste anymore time, and decides the men will train until they are ready to join Prince Charles.

Jamie’s assessment is proven true as we watch Murtagh try to get the men to line up in formation. They want to know when they will get real weapons, but first they must learn their left from their right. Meanwhile, Claire overhears the drill and it triggers memories of her time during World War II as a combat nurse. It is the first of many moments of delayed PTSD Claire experiences as the preparations for battle remind her of the tragedies of war. As she watches Fergus play shinty with some young men, flash forward images of young men playing baseball draws a parallel between the two times. The memory seems to agitate Claire, whose anxiety starts to build.

When Claire sees Angus spit out his food and say, “Christ!,” she is brought into another flashback. This time, she remembers two American soldiers, Corporal Grant and Private Lucas, complaining about their rations, one uttering the term, “Jesus H.  Roosevelt Christ!,” which reveals the origin of Claire’s catchphrase. Jamie notices that something is not right with Claire when he walks into their cabin that night and sees her deep in thought, but she insists she is fine, once again seeing the similarity between the two times of war when she picks up Jamie’s pin and whispers the Fraser motto, “Je Suis Prest.” It reminds her of the “Airborne” patch on the uniforms of the American soldiers, and it is clear Claire is struggling with the events of her past. 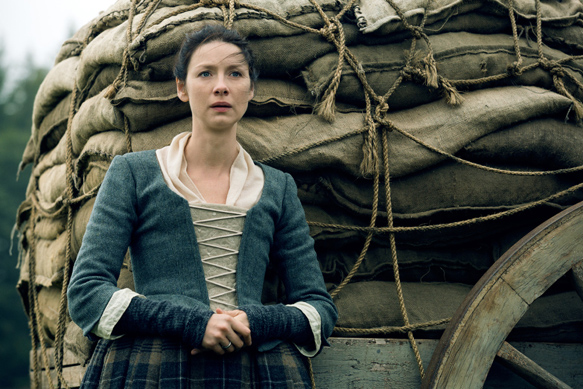 The next day Jamie gives a powerful speech. It is not quite Braveheart-worthy, but he shows he is a strong and empathetic leader who understands what these men are going through, and it is enough to rally them into action. And just like that, the moment is ruined by the attack of the man-boobs. Dougal and some other men come storming through shirtless and covered in dirt, depicting the “Highland charge,” which undermines everything Jamie has been trying to instill in his men. This ambush tactic is void of strategy and Jamie reminds them they would need the element of surprise in their favor, which he doubts they would get.

Jamie’s patience begins to run thin when he confronts his uncle privately. Dougal, as arrogant as ever, tells his nephew he understands what Jamie is trying to do, but that he has more experience. Jamie immediately shuts Dougal down, saying he knows what these men are up against and how to prepare them, ultimately telling his uncle to either get with the program or hit the road. Dougal then moves on to Claire to try to manipulate her to enlist Dougal’s help, claiming Jamie is overwhelmed and too proud to ask for it.

Obviously Dougal’s ego will forever cloud his judgment because he should know by now that Claire would never take the bait. Even after Dougal brings up their agreement to wed should Jamie die and threatens to tell Jamie, Claire brushes it off claiming she and Jamie share everything and then proceeds to give Dougal a history lesson on the origin of the word, “narcissism,” calling it his affliction. She caps off her insults powerfully with an F-bomb, but Dougal accepts her assessment, confessing that while he does love his reflection, he loves Scotland more and would risk his life to restore a Stuart to the throne.

As Jamie continues to be at odds with his uncle, Claire’s PTSD comes to a head when the noise of marksmanship training elicits another flashback, this time putting her in full panic mode.  As she makes her way behind a wagon, her mind takes her back to the future and we see Claire traveling to her field hospital with Corporal Grant and Private Lucas when their vehicle is blown off the road. She wakes in a ditch with Grant next to her and we hear Lucas begging for help. Claire wants to go help Lucas, but Grant goes instead and is shot multiple times. After the Germans shoot their car and it explodes, Claire covers her ears and tries to drown out the sound as Grant calls for his mother while he dies.

Jamie finds Claire in the same fetal position covering her ears behind the wagon and she tells him the story of what happened, revealing she had “closed the door on that night,” until just then.  The suppression of this traumatic moment has made witnessing the training, and thinking of what could go wrong overwhelming for Claire, but she is not one to go away and wait to see what happens. When Jamie tells her to return to Lallybroch, she explains that forsaking everyone she cares for and being helpless back in Lallybroch would be the same as being in that ditch, powerless to move like a “dragonfly in amber.” She has made up her mind and decides she cannot be “helpless and alone ever again.” In a touching moment between these two characters that have suffered trauma, Jamie promises that Claire will never be alone again, and it is a bittersweet sentiment given that we know Claire is not alone in the future, but she also is not with Jamie. 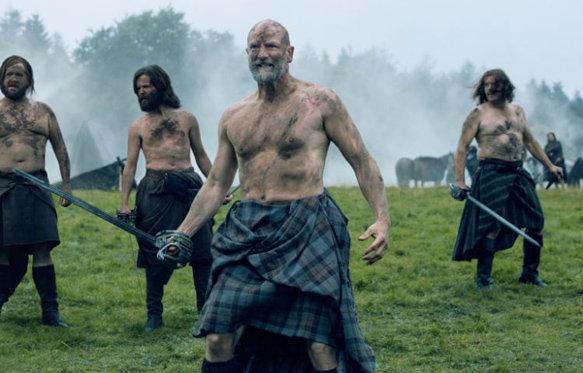 Next, fans are introduced to William Grey, a 16-year old English soldier, who after recognizing Jamie as the infamous “Red Jamie,” tries to stab the Scot while he is urinating, but is no match for the king of men. Jamie and Murtagh try to acquire some information from the young Brit, but their implied torture method does not work. Thankfully, Claire really likes to moonlight as an actress and walks in pretending to be a helpless Englishwoman that accuses Jamie of being a “Scottish Barbarian” who is after her virtue. She then offers to surrender herself to Jamie if he lets the boy go.

Jamie plays along and starts to roughly handle Claire, pulling up her skirt and threatening to “ravish” her. It is a great moment of comic relief, especially when Claire knees Jamie in his privates for dramatic effect, and the moment catches him off guard as he utters, “Sassenach.” Finally, the boy agrees to tell the Scots everything they wish to know and provides plenty of useful information. Jamie spares his life, telling the young Lord Grey he hopes he uses it well and the boy responds by telling Jamie he now owes a “debt of honor,” which he hopes to “discharge” in the future. Once he clears his debt, he promises to kill Jamie, and Jamie’s reply is that he hopes they never meet again. In a moment of foreshadowing, Lord Grey takes a page out of the Lannister handbook and says, “A Grey does not forget an obligation, sir.”

Thanks to the information obtained from Lord Grey, Jamie enlists some men and plans a raid on the English camp, notably without Dougal. In their attack, they are able to remove the Redcoats’ wagon wheels, which will slow the British down. Upon their return, they make a fire with the wheels taken and Jamie goes to find Claire in their cabin. Jamie tells Claire that her selflessness allowed them to gain the intelligence that most likely saved many lives and it seems like that knowledge allows her to reconcile with her past and charge forward with Jamie to the Jacobite camp where Prince Charles awaits. Once again, Claire utters the words, “Je Suis Prest,” this time ready to take on what lies ahead. CrypticRock gives Je Suis Prest 4 out of 5 stars. 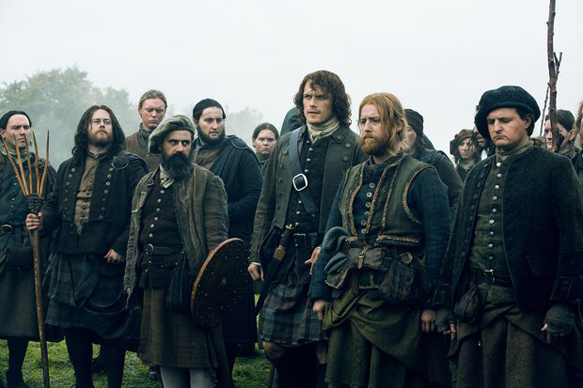