Claire Fraser seems to be battling Glenn Rhee of The Walking Dead for a number of near death situations. In Outlander’s latest episode La Dame Blanche, viewers see the Frasers go through a roller coaster of emotions and physical challenges. They do not have to wait long before Claire is coughing and hunched over in pain after drinking some poisoned wine, although baby names like Lambert and Dalhousie might be reason enough to make some queasy. 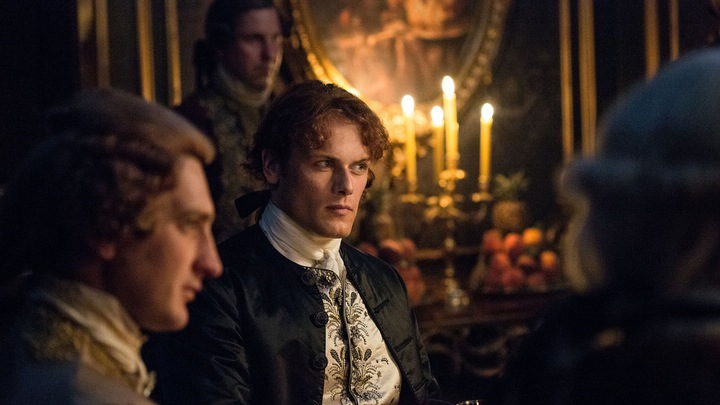 It is shortly after, Duvernay sparks conversation about Jamie and Claire’s ideas for baby names that Claire excuses herself while Jamie and Duvernay play chess. We then find the Comte St. Germain lurking in the background ominously watching Claire as she sips a glass of wine and ultimately ends up sick as a dog. Back at the Fraser’s residence, Claire reveals she believes bitter cascara was put in her drink and the Comte is the prime suspect, but reassures Jamie that after drinking some tea she will be fine and that the baby is fine as well. Jamie wants to get his hands on the Comte, but Claire convinces him not to retaliate, knowing any public scandal could affect the relationship Jamie has built with the Bonnie Prince.

After Claire experiences more discomfort, she asks Jamie to distract her with politics, asking him about what he has learned from Duvernay. Jamie tells her that the idea of an alliance between Britain and France interests the King and suggests throwing a dinner party at their home for Sandringham to convince the duke that Prince Charles is a “delusional popinjay.” Claire knows the presence of Sandringham could lead to Jamie learning of Jack Randall’s survival and decides there is no better time than the present to tell him herself. She, along with everyone watching, is shocked by Jamie’s unexpected reaction. He sees Black Jack’s existence as a relief, knowing he now has something to look forward to, and that he will be able to exact his revenge and watch the life leave Randall’s body himself.

The next day, Claire goes to see Master Raymond to confront him about the bitter cascara, but he is unaware of its use on her, revealing he had only sold it to an unknown servant. He brings Claire to the back of his shop into a secret lair and we get some foreshadowing here as Master Raymond tells Claire that he is fascinated by things not of this time (wink, wink). He then reads her future by having Claire throw sheep bones and assures her she will see her “friend,” Frank, again. Claire seems conflicted by this piece of information, knowing if it is true, it means her and Jamie’s plan ultimately does not work. Master Raymond also helps Claire by giving her a special stone necklace that changes color when it detects poison. 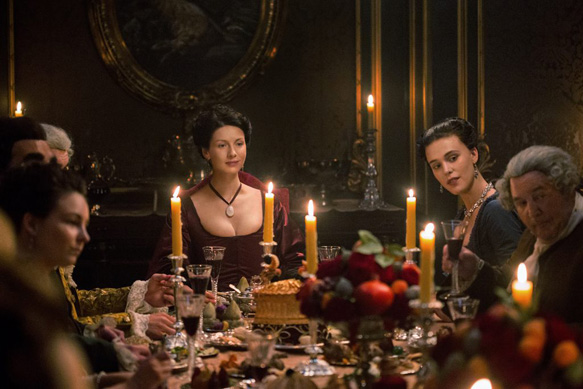 La Dame Blanche draws some parallels to the season’s opener both in Claire’s interaction with Master Raymond and again when Claire visits Louise, who reveals she is pregnant and the father is not her husband. She seeks Claire’s medical knowledge since she feels her only option is abortion. But, Claire urges Louise to keep the baby, giving her the idea to sleep with her husband and claim the baby is his. In this moment, we see Louise ask Claire how she can raise a child with a man that is not the father, with Claire answering that all that matters is that the child is surrounded by love. It is a heartbreaking moment for the audience, knowing Claire will ultimately have to leave Jamie and raise their child with Frank.

That night, Jamie returns home from the brothel and is ready for action. He wakes Claire and begins to undress when she notices bite marks on his thighs. She asks if they were given by the prostitute Fergus usually speaks of and Jamie assures her it was a different girl entirely, digging the hole a bit deeper. Jamie explains that the knowledge of Black Jack’s survival has enabled him to feel “like a man again,” finally able to feel lust and arousal without Randall haunting him. Claire, who has been struggling with feeling isolated and alone in her pregnancy, is not pleased with the fact that it took another woman to stir up Jamie’s libido. Yet, Jamie explains that she too does not understand his struggle.

This leads to a long overdue conversation between the two. Sam Heughan and Caitriona Balfe are stunning in this scene as they both reveal the pent up frustrations that have been brewing inside. Jamie lets the wall he has built fall down as he lets Claire know that since the events at Wentworth he has felt like the one safe place he had within himself was destroyed and he was left exposed and alone, “trying to hide under a blade of grass.”

Jamie leaves to sleep elsewhere, but soon Claire finds him and disrobes. It is the moment fans have been waiting for, where Jamie and Claire finally reconnect on a physical and emotional level. As they are bathed in moonlight, they make love both tenderly and passionately, but their post-coital bliss is quickly interrupted by noises heard on the roof.

After finding that the cause of the noise is Prince Charles, Jamie and Claire find out some useful information, while Claire tends to a bite on the prince’s hand. Charles divulges that the bite came from the pet of his lover, whose home he was fleeing, and that the pet bites everyone except his paramour. Claire immediately realizes that he is referring to Louise’s pet monkey and that Charles is her baby’s father. This provides Jamie and Claire with an idea to expose the pregnancy at their dinner party, which they hope will cause the prince to act out and weaken his alliance with Sandringham.

A week later, it is the day of the dinner party, but Claire leaves to go to the hospital to help with victims of an explosion, where Mary Hawkins also assists while Murtagh and Fergus wait outside. Though Claire promises to be back before sundown, she is delayed when the carriage wheel is broken. Claire, Mary, and Murtagh must walk back but send Fergus ahead to warn Jamie they will be late. While they walk, Mary reveals she has fallen for a man named Randall, but it is not who Claire initially suspects. She has developed feelings for Alexander Randall, which is a relief for Claire. That relief is short-lived when Claire, Mary, and Murtagh are attacked by a group of masked men. Murtagh is knocked unconscious and while no damage is done to Claire once the men recognize her as “La Dame Blanche,” Mary unfortunately does not come out unscathed. Mary is raped before the men attacking Claire recognize her, one of them with a noticeable birthmark on his hand, and Mary is left sobbing in Claire’s arms. 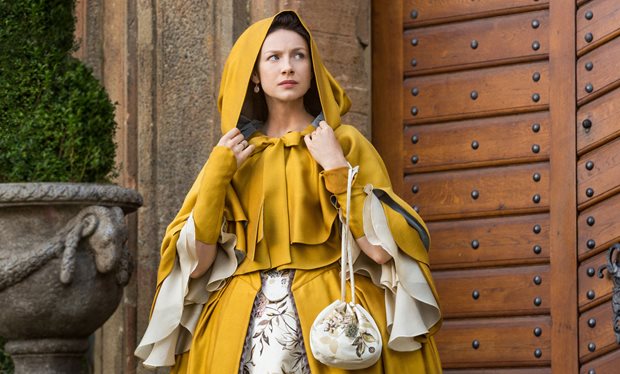 Once they arrive at the Fraser’s home, Jamie and Murtagh are ready to hunt down the attackers, but Claire advises Jamie to take Mary upstairs, where Alexander Randall, having seen Mary outside of the Fraser’s home, keeps an eye on her while she rests in a drug induced sleep. Things get awkward pretty quickly even before the guests are seated for dinner. The duke has invited the Comte and his wife, which makes both Jamie and Claire uncomfortable. The entrance of Louise and her husband, Jules, also provides an amusing moment when Charles kisses Louise’s hand and lingers too long.

Claire finally greets her guests, wearing her gifted necklace from Master Raymond, which the Comte notices, revealing his knowledge of the stone and its magical properties. Once again, Stanley Weber harbors a sultry wickedness that promotes his cunning underhandedness as the Comte. Initially, the dinner looks like it could be successful for Jamie and Claire, with the duke’s belittling jokes about the pope annoying the prince, and Charles going on about “God’s plan” to have him rule Britain. When Jamie reveals Louise’s pregnancy, Charles is anything but thrilled over the announcement, realizing Louise’s deceit.

Unfortunately, whatever civility there is soon vanishes when Mary awakens and is still delirious, thinking Alex Randall is her attacker and running downstairs. Her father, as well as the other guests, find her fighting Alex off, while he tries to restrain her, and a choreographed fight straight from a WWE Smackdown ensues. Sandringham and Prince Charles cannot get out of there fast enough and the Comte takes advantage of the situation, calling the gendarmes. This does not bode well for the Frasers. CrypticRock gives La Dame Blanche 4 out of 5 stars. 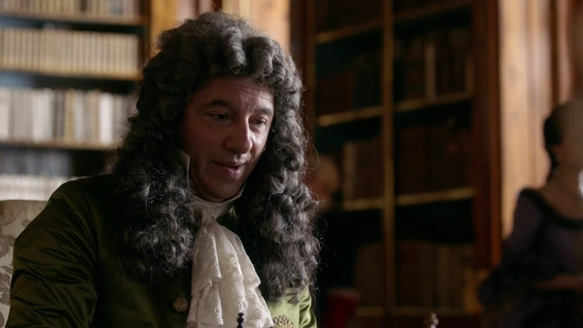