There is no place like home and Paris most certainly is nothing like Scotland. In Outlander’s second episode of its sophomore season, Not in Scotland Anymore, Claire, Jamie, and Murtagh are quickly thrown into the opulent lifestyle of the French court, and the show offers a good amount of humor as viewers watch them try to assimilate into their new roles.  Jamie’s tormented mind opens the episode as fans watch a dream sequence in which an intimate scene of lovemaking soon turns gruesome as Claire’s face morphs into Jonathan “Black Jack” Randall’s, and Jamie then stabs Randall incessantly until he is covered in blood. After waking up in a cold sweat, Jamie is reassured by Claire that Randall is dead, but that knowledge is not enough to rid him of Randall’s ghost. 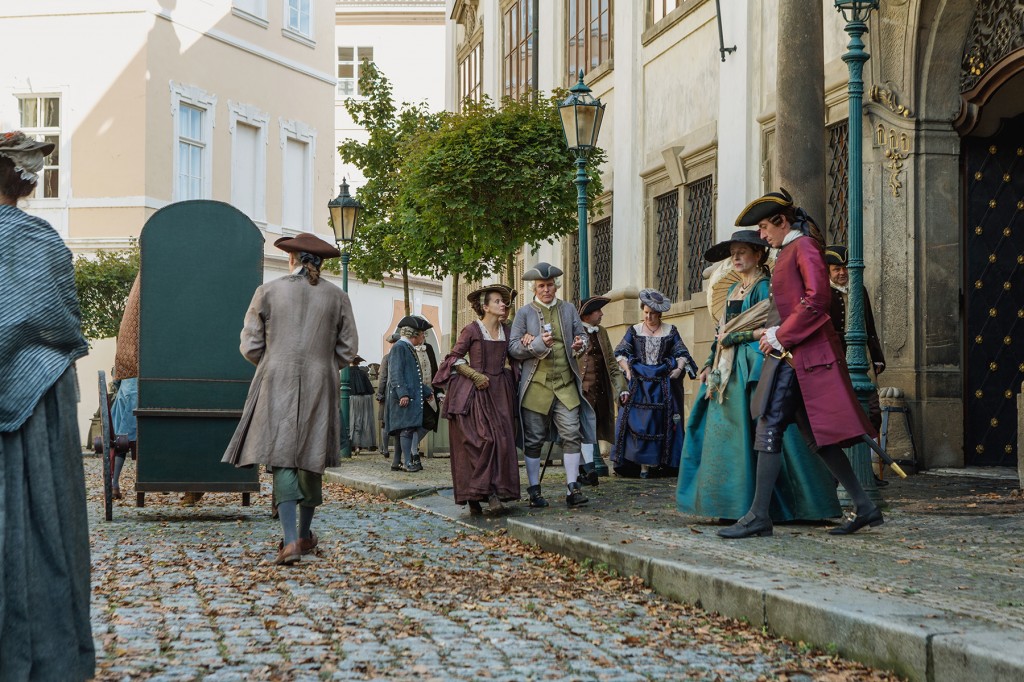 The next day, Claire must deal with an exasperated maid that does not understand why she would fold her own clothes or make her own bed. Here we see the first of many exquisite ensembles crafted by costume designer extraordinaire Terry Dresbach, who maintains Claire’s modern sensibilities with her look. She is the epitome of elegance in her Christian Dior-inspired attire as she makes her way to an apothecary, where she meets Master Raymond (Dominique Piñon), one of many new characters viewers are introduced to in this episode.

Master Raymond’s apothecary is full of herbs, snake-oil, and a hanging crocodile.  He is a quirky, toad-like looking man that does not seem immediately trustworthy. Yet, as Claire seeks a remedy for Jamie’s sleepless nights, Master Raymond finds himself intrigued by Claire after she exposes his “crocodile blood” as fake, and he soon learns she is the person that caused the burning of the Comte St. Germain’s ship. When she asks if the Comte is Master Raymond’s friend, he lets her know they are rivals, which in turn means they are enemies, and since an enemy of an enemy is a friend, Claire and Master Raymond must then be friends.

Meanwhile, Jamie and Murtagh spar while French aristocrats alarmingly look on since dueling is outlawed in France. This scene does a fantastic job of showing Jamie’s physical struggle to get back to the man he was. His hand, still weak, makes him vulnerable, but the scene also shows Jamie’s perseverance and warrior mentality. This moment also exhibits the fish out of water aspect to these men. Rather than the rugged terrain of Scotland, they are on a manicured lawn with Murtagh waxing poetic about how he misses his homeland, to the point where he suggests murdering Charles Stuart (Andrew Gower) to avoid the Jacobite rebellion. 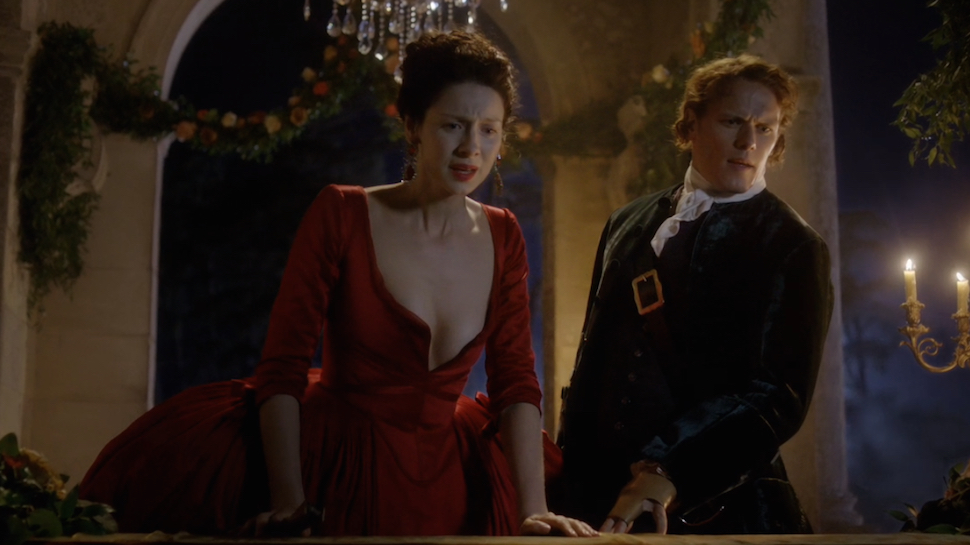 Jamie and Murtagh soon meet Prince Charles after receiving a letter from Jamie’s cousin, Jared, stating Charles is willing to meet Jamie at a brothel. The debauchery ensues as viewers see a dimly lit room full of French nobility being offered dildos for purchase or rent. In the midst of these scandalous moments, Jamie, with Murtagh in tow, listens as Prince Charles speak of how he does not want to be surrounded by sycophants, but then is miffed by Jamie and Murtagh’s truthful declaration that Scotland is not ready for a revolution. Prince Charles comes off as a whiny, sniveling brat, but Jamie’s honest nature eventually wins him over and he enlists Jamie as his envoy of sorts at court, where he can petition the Minister of Finance, Monsieur Duverney (Marc Duret) for funds.

After Jamie and Murtagh fill Claire in with details of their meeting with Prince Charles, Claire agrees that since money is needed for a war, they’ll need an invitation to Versailles, where they can work on making sure the prince does not get the funds he needs. This brings Claire to the sassy, Louise de La Tour, Marquise Rohan (Claire Sermonne) who invites Claire over while she is getting groomed.  Louise is a breath of fresh air and keeps things light-hearted as she talks to Claire.

In the midst of her various slaps to her esthetician with each rip of a waxing strip, Louise introduces Claire to Mary Hawkins (Rosie Day: Hope and Glory TV series, Homefront TV series), a shy and stuttering young girl, who is in Paris to be set up with a widower of means. Louise offers Claire and Mary an invitation to Versailles as well as the aid of a dressmaker so that Claire arrives in a dress “fit for a queen.” Then, both Claire and Mary are treated to witnessing a Brazilian wax and we learn that barbaric grooming rituals have been trendy for quite a while.

Later that evening, we find Claire seductively slipping into bed with Jamie and helping him discover exactly what she has been up to. This scene offers some chuckles as Jamie quickly learns that Claire’s “honeypot” has been waxed and gives viewers one of the best terms for female anatomy ever created. After Jamie asks what it looks like now that Claire has removed her “lovely forest,” she tells him to see for himself, and as the two begin to get intimate, Jamie suffers from a flashback of Jack Randall, further showing how his traumatic experience is a demon he has not been able to expel.

Two weeks later, it is time for a ball at Versailles as Jamie and Murtagh are seen waiting for Claire. She descends upon the stairs and pauses as Jamie and Murtagh witness her Pretty Woman moment. Claire is wearing a rather short and deeply cut red dress, and does not quite get the reaction she expects with a shocked Jamie asking if she is “mad.” His reaction does not affect Claire. She is proud of the dress, revealing she had a hand in the design, and also reassuring Jamie by telling him she can cover herself with a fan. 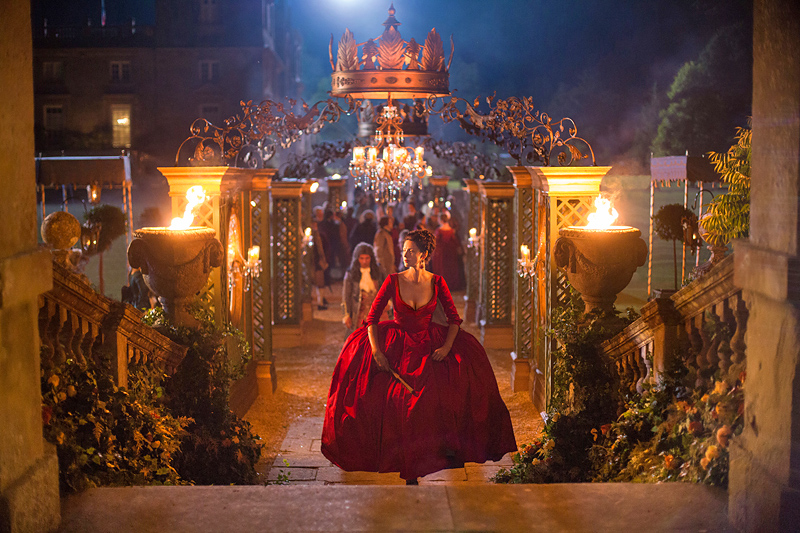 Once they have entered the palace, viewers are introduced to the first of several new characters. Jamie’s ex, Annalise (Margaux Chatelier: Belle & Sebastian 2013, Tenderness 2013), approaches Jamie and the moment is awkward. The look on Claire’s face here is extremely entertaining as it serves to make Jamie rather uncomfortable. Annalise offers to introduce Jamie to the king, and though she keeps her brow raised, Claire allows Jamie to be ushered away.

Jamie, accompanied by Murtagh, meets King Louis XV of France (Lionel Lingelser: Daddy Cool 2008, Marie madeleine 2015 short) in a room full of men watching as Louis struggles to release a bowel movement. This scene brings along a few laughs as viewers watch and listen to the strained sounds of the constipated king. This gives Jamie an opportunity to introduce himself, if only to offer his advice to eat porridge, to help alleviate the king’s predicament.

Once inside, Duvernay apologizes for his behavior while drying his wig, which now looks appropriate for an 18th century Hair Metal band. As a conciliatory gesture, he invites Jamie to play a game of chess, but their conversation is cut short when Murtagh notices a familiar face, after gawking at the King’s companion who walks by in a vulgar breast-baring dress. Murtagh charges toward the Duke of Sandringham (Simon Callow), but before he can draw his sword, Jamie stops him, reminding him that drawing a weapon in the presence of the king means death.

Sandringham is as deplorable and duplicitous as ever, blaming his betrayal of Jamie on Jack Randall. Claire then excuses Jamie and Murtagh to chat with their newly acquired acquaintance, Duvernay, while she talks to Sandringham. The tension is at an all time high here as Claire, clearly seething but holding it just beneath the surface, seeks to destroy Sandringham. But, before she gets the chance, they are interrupted by the duke’s secretary, a sickly man, who she learns is Jack Randall’s younger brother, Alexander (Laurence Dobiesz: Sherlock Holmes: A Game of Shadows 2011, All the King’s Men 1999). Claire’s world comes crashing down after she learns that Black Jack is still alive, while Sandringham revels in her turmoil.

The final moments of the episode end with Claire questioning whether she should tell Jamie that his ghost is no longer just a ghost, but is actually alive, knowing he is bound to find out eventually. As she watches Jamie, conflicted and devastated at what this could mean for her husband and their mission, a beautiful fireworks display erupted over the gardens of Versailles. CrypticRock gives Not in Scotland Anymore 4 out of 5 stars. 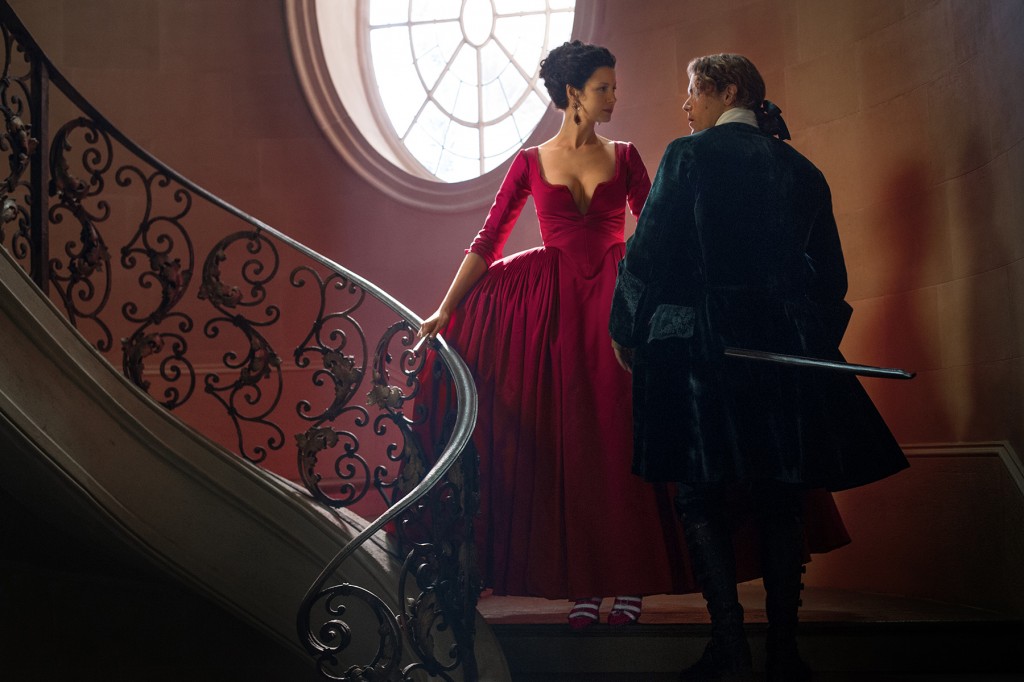