There is something about coming home, the familiarity, the security of a place that is a sanctuary. Claire and Jamie’s return to Scotland in Starz’s Outlander episode The Fox’s Lair has given them the opportunity to heal as they have left behind the toxicity of Paris and are now surrounded by family and friends. It is a wonderful thing to see these two beloved characters happy again. They are, against all odds, a power couple, and as they are pulled back into the politics of the Jacobite rebellion, they are now stronger and unified in their efforts to save their home and all their loved ones. 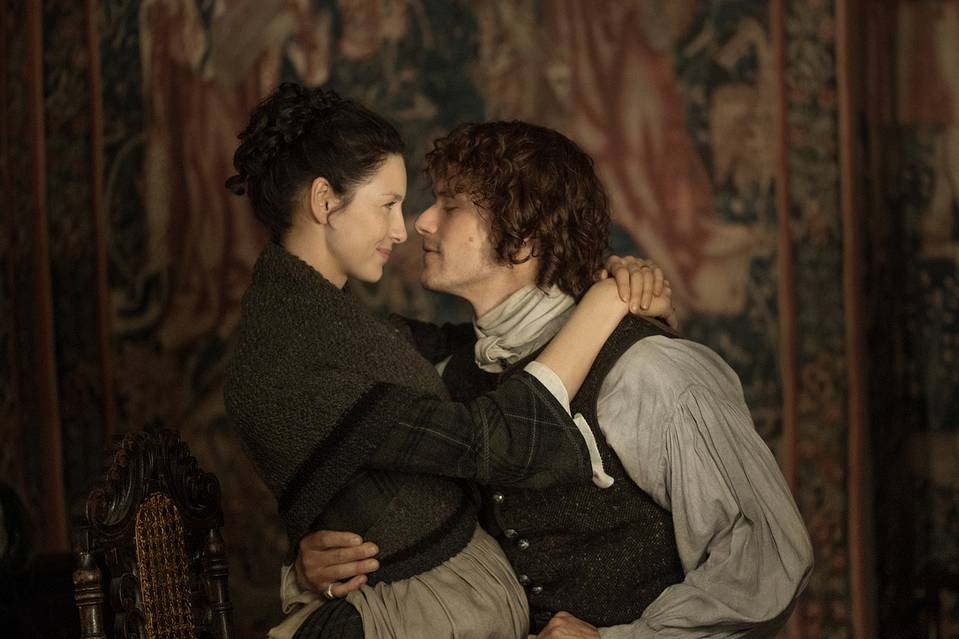 The episode opens with images of the Scottish countryside and the Fraser home of Lallybroch. Jamie’s sister, Jenny, has had another baby and the potato crop Claire made sure was planted has been successful. While everyone, including Fergus, who has come back with Jamie and Claire, discusses how to cook potatoes, a letter arrives from Jared, now back in France, and the jovial mood quickly changes as Jamie reveals his signature has been forged as a supporter of the Stuart’s claim to the English throne.

Claire wants to flee to Ireland, knowing the attempts to change the future have all failed, but Jamie does not want to give up, believing if they cannot stop the rebellion, their focus must shift to winning it. Before joining Prince Charles, who is now in Scotland, and the army he is assembling, Jamie must visit his “grandsire” (grandfather), Lord Simon Fraser of Lovat, to acquire more men for the cause. Jenny is not too crazy about the idea, and fans learn that Lord Lovat is pretty much a self-serving dirtbag, who because of some “bad blood,” tried to have Ellen MacKenzie (Jamie and Jenny’s mother) kidnapped.

That night, Jamie also tells Claire that his father is the bastard of Lord Lovat and a kitchen maid (talk about your family drama). Jamie admits he should have told Claire before they were married, but none of that matters as Claire and Jamie begin to reconnect as the screen fades to black. In a bittersweet moment, Claire wakes up in the middle of the night to see Jamie down below holding Jenny’s baby and whispering to the child in Gaelic. It is a touching moment as viewers are reminded that he never got to hold Faith, and also will not be able to hold the baby Claire raises with Frank in the future. 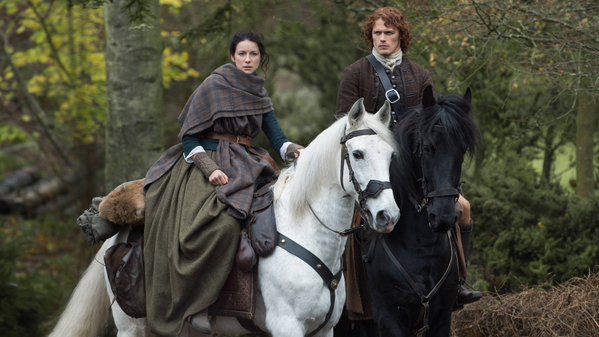 They depart the next day, eventually planning to meet up with Murtagh and Fergus in a couple weeks. Upon arriving at Beaufort Castle, Claire and Jamie are greeted by a familiar face, Colum MacKenzie, who has also come to seek an alliance with Lord Lovat. Claire is not too thrilled to see Colum there since she partially blames him for being arrested for witchcraft. Colum claims he had nothing to do with it and that she was just in the wrong place at the wrong time. When Claire reveals Laoghaire’s role in her arrest, Colum lets Claire know he had the girl beaten, but it just so happens that Laoghaire is at Beaufort Castle to do chores for Colum, and it gives Claire the opportunity to let her have it.

Laoghaire claims she has been looking for Claire and that she is not the same person who did the despicable things that almost ended Claire’s life. She tells Claire that God has brought them together so that she could apologize and be right with God, but Claire unleashes her anger and tells Laoghaire she has often thought about what she would do if they ever saw each other again, and it includes lighting her on fire and dancing on her ashes. It is a bit of an anticlimactic moment because after that confession, Claire admits that she does not hate Laoghaire, but pities her instead. Yet, Claire does not offer any forgiveness.

Later that night at dinner, Jamie argues in favor of Prince Charles’s cause, trying to convince Lord Lovat and Colum that they need to win the war in order to preserve their way of life. Unfortunately, Colum uses Jamie’s relationship with Charles, and his time spent in France, to point out that the French are unreliable, not having yet pledged their support. While Colum tries to convince Lord Lovat that they should stay neutral, Lord Lovat remains indecisive. Jamie realizes that his grandfather’s indecision most likely means he wants something, and we soon find out that what he wants is Lallybroch.

Jamie is not willing to give up his home and once again Claire’s virtue is put on the line when Lord Lovat tells Jamie he can keep Lallybroch in exchange for Claire’s honor (what a low-life). But, Jamie uses the “La Dame Blanche” card, because that always works, and proceeds to tell Lord Lovat that he is not worried about Claire since any man that tries to violate her will end up losing his privates. Still, Jamie warns Claire to look out for herself even though his grandfather respects the supernatural, and confesses he may be forced to give up Lallybroch in exchange for Lovat’s men. 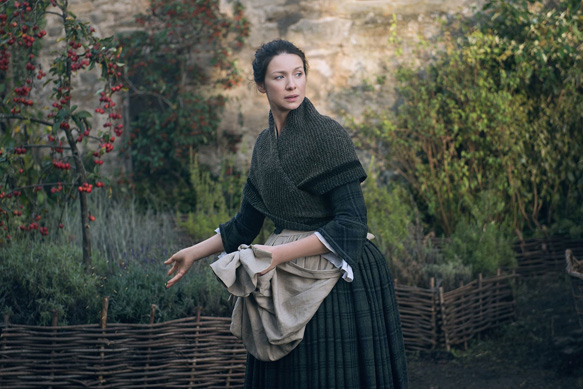 Jamie and Claire did acquire some scheming skills in France and they use some of that knowledge while at Beaufort Castle. Claire convinces Laoghaire, through her powers of manipulation, that in order to win back Jamie’s favor, she needs to persuade Lord Lovat’s son, who is infatuated with her, to stand up to his father, thinking this will prompt Lovat to offer his support. But, trusting a girl to do a woman’s job (or Laoghaire at all) is Claire’s first mistake because Laoghaire scares the man off by being a bit too forward. Claire also finds Lord Lovat’s seer, Maisri, in a chapel and obtains some useful information. Claire had seen Maisri being ill-treated earlier and asks the seer what she saw that caused Lovat’s ire. Maisri reveals her vision of an executioner standing behind Lovat, which Jamie later explains is a traitor’s death.

Meanwhile, Jamie tries to convince Colum that they need to fight in the rebellion and win, unable to reveal his reasoning behind this claim, but Colum maintains his stance on neutrality. It looks like Jamie will have to turn over Lallybroch, and just as he is about to sign over ownership, Claire shows off her acting chops, reciting the same vision that Maisri prophesized and ending her theatrics by telling Lovat she saw the ground covered in white roses. Jamie chimes in, exclaiming it is the symbol of the Jacobites, while Claire begins to pretend to faint. Lovat is pretty spooked and threatens to cut out Claire’s tongue, but his timid son, Simon, stops him and announces that he will fight for King James even if his father does not.

Too bad Lord Lovat is a cunning man. His son’s outburst gives him an idea that leads him to sign the neutrality agreement. Lallybroch is safe for now, but Claire, Jamie, and Simon leave Beaufort Castle without the outcome they hoped for. As they ready to depart, Claire persuades Jamie to speak to Laoghaire to uphold her end of the bargain, and fans are reminded what a delusional girl Laoghaire is when she admits she still hopes Jamie will love her (file that under “bunny boiler”).

Jamie and Claire, along with Simon, ride away from Beaufort Castle feeling disheartened until they see Lovat’s men. It turns out Lord Lovat is playing both sides by providing his men to the Jacobite cause. If the Jacobite’s win, he can say he supplied men to his son and if the British win, he will not be executed for treason since he signed the neutrality agreement. Although things did not go exactly as planned, Jamie and Claire are now able to return to Prince Charles with the men they needed, but they should know by now, changing the future is not as easy as it seems. CrypticRock gives The Fox’s Lair 3.5 out of 5 stars.