At the end of season one of the Starz hit Drama Outlander, we find a pregnant Claire and a post-traumatic Jamie, played by the supremely talented Caitriona Balfe (Super 8 1011, Now You See Me 2013) and Sam Heughan (Young Alexander the Great 2010, Doctors TV series) respectively, as they set off to France to try to change the future. Season two, which is based on Diana Gabaldon’s second book in the series, Dragonfly in Amber, does not begin where we would have expected. In a bold move by executive producer, Ronald D. Moore, the first episode, Through a Glass, Darkly, brings us right into the future, or present, depending on how you look at it, with Claire lying in familiar territory. She is no longer in the 1740s and she is not happy about it. The dismal look on Claire’s face in this opening scene matches the muted tones of the present she has now found herself in. The vibrant greens of 18th century Scotland are gone, and with them, Claire’s own light has dimmed significantly. 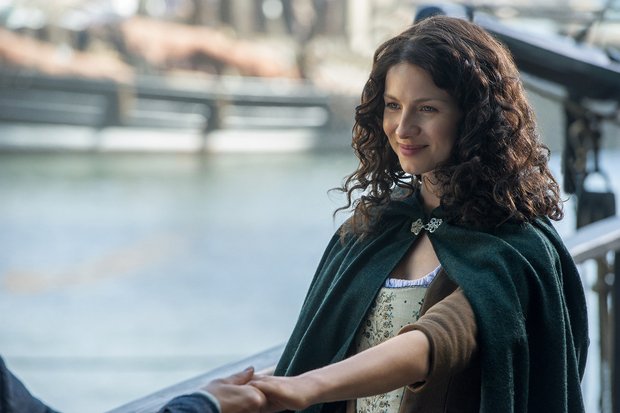 We soon hear Claire release a guttural scream and we feel her agony. After all, she has just left behind the love her life. Claire then learns that she has landed in 1948 from a man driving up the road where she is walking. Her turmoil is palpable as she desperately tries to find out what happened at Culloden. After hearing that the outcome was not changed and the British won, Caitriona Balfe completely destroys the audience as they left with Claire clutching herself, while she falls to the ground and sobs in the middle of the road. We can only imagine the defeat, guilt, grief, and heartbreak she feels as she realizes she has lost her friends and her soul mate.

After a re-worked version of the Skye Boat song in the opening credits, we hear and see the stylish oxfords of Frank (Tobias Menzies: Finding Neverland 2004, Atonement 2007) eagerly walking through the hospital where Claire has been taken. He approaches her cautiously, while Claire’s gaze is at the window, most likely thinking of her beloved Jamie. After asking for the radio to be turned off and complaining about the noise, clearly irritated and angry at her current circumstance, she sees the unexpected reflection of Frank in the window. 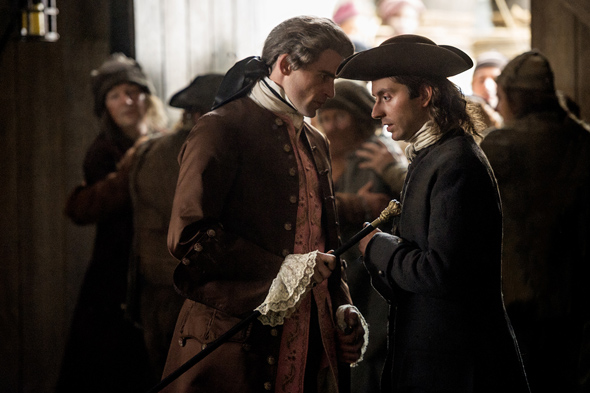 The relief, happiness, and gratitude Frank must feel in this moment as he sees his wife, in the flesh, serves to justify the hope he held onto that she would one day return to him. Unfortunately, Claire is not as enthusiastic about her return or about seeing Frank. She cringes when he tries to reach out to her, and after he lets her know he has secured rooms for them with Reverend Wakefield, her only concern is whether Mrs. Graham still works there.

It has been a week since Claire has been back when we find Frank and Reverend Wakefield discussing whether she has revealed any information regarding her disappearance. Meanwhile, Claire is frantically looking through as many historical records of Jacobite history as possible to find out exactly what happened to Jamie. She has confided in Mrs. Graham, who seems to believe her story without hesitation, and there is a much needed moment in the midst of the sadness when Mrs. Graham brings up Claire’s constant reference to Jamie’s sense of humor. It is the first time we see Claire smile as she thinks of Jamie, but soon remembers that he is gone, and crumbles into her emotional dungeon of anguish. Mrs. Graham tries to convince Claire that she should hold on to this experience and keep it locked in her heart, but not to forget the living, breathing, husband that still loves her, and with whom she can have a future.

That night, Claire invites Frank into her room and she is ready to tell him everything. In this moment, we see the hope in Frank’s eyes, and what Ronald D.  Moore and his team have done so well is allow the audience to really sympathize with Frank. Even as Claire tries to begin telling him what happened to her, Frank makes sure she knows she does not need to, that he is just thankful to have her back. But, Claire needs to make him understand the situation, and so, in the middle of the night after hours of listening to her divulge all that she has been through, Frank’s reaction is a bit hard to believe.  He does not think she is crazy, but is sympathetic and even though he acknowledges it as a “leap of faith,” he accepts what she has told him.

But, what Frank does not realize is that Claire has yet to drop a bomb that almost breaks him. She tells Frank she is pregnant, and in a brief moment of possible hallucination, he thinks the child is theirs. Then realization hits and there is only so far someone can be pushed before reaching a breaking point. Frank lunges at Claire with a clenched fist, the pain evident in his tense body as he restrains himself from giving into his anger and feeling of complete betrayal. Tobias Menzies is outstanding in this entire episode, but really shines in this scene. He is able to show Frank’s internal conflict beautifully and it is heartbreaking to see him realize that, in a way, he has lost Claire just as he got her back, a piece of Jamie living on in their baby.

Rather than take his anger out on Claire, Frank takes it out on the Reverend’s storage room. After apologizing to Reverend Wakefield, who now knows that Claire is pregnant with a deceased man’s child, the Reverend helps Frank come to the conclusion that he is in a unique situation where, as we come to find out, a man incapable of having children, now has a chance to raise a child. After some contemplation, Frank decides he wants to start over with Claire in Boston, where a position at Harvard awaits, but he has conditions. The child will be raised as Frank’s with no mention of Jamie, and Claire must let go of searching for answers regarding Jamie’s fate. She agrees after revealing she promised Jamie she would let him go, giving Frank her 18th century clothes, but finding it too hard to take off Jamie’s wedding band. 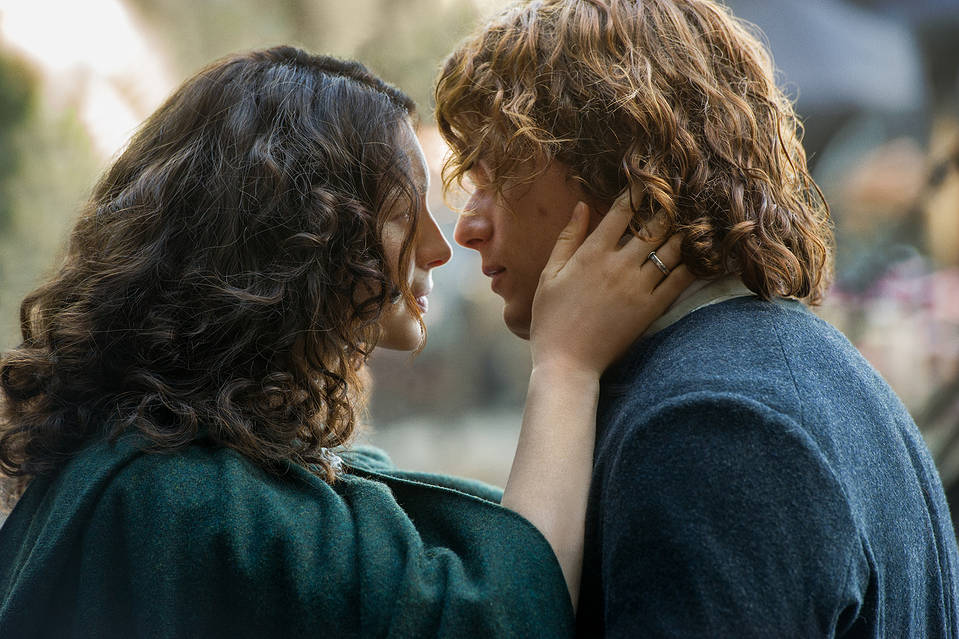 Soon, Frank and Claire land in New York City, and as Claire descends on the stairs of the plane, Frank reaches out his hand. Claire smiles and her face lights up as the show transitions from 1948 to 1745 with Jamie’s hand now helping Claire as she gets off the boat in France. After one of the best lines of the hour, courtesy of Murtagh, where he laments that France smells like frogs, that night we find a recovering Jamie as he lies in bed, but it is not long before Claire puts her scheme cap on and begins discussing their plan to stop the Jacobite rebellion. Jamie, seeming more logical and showing the warrior he is, asks if they should be trying to figure out how to win the war instead, but he soon falls in line with Claire’s plan, which leads them to his Jacobite cousin, Jared.

Three weeks later, Jamie and Claire meet with Jared, and Jamie must prove that his intentions are honorable. He does so by showing Jared the brutal flogging scars on his back. Once Jared is convinced, he and Jamie make a deal, where Jamie will run Jared’s wine business while Jared travels to the West Indies, and so Jamie and Claire now have a door into French society. It is not long, though, before Claire gets herself mixed up in affairs that could prove troublesome.

In the final scenes, we see Claire notice men being taken out of a ship, and after seeing the pustules on the face of one of the men, she realizes there is a smallpox epidemic on the ship. We soon learn the ship belongs to the Comte St. Germain, played effortlessly by Stanley Weber (Borgia TV series, Not Another Happy Ending 2013), who enters the storeroom where the sick man has been taken. The Comte wants to keep the news of the outbreak contained, but the cat is out of the bag, and his ship along with its cargo must be destroyed.

Stanley Weber gives the Comte a balance of disdainful intimidation combined with an underlying sensuality that makes his character seem both threatening and somehow alluring. He is disgusted with Claire and Jamie, but mostly Claire since she is the root of his current problem. Later that night, they all watch the ship burn in the distance with the Comte eventually looking at Claire with vengeful hate, she now having made a formidable enemy. CrypticRock gives Through a Glass, Darkly 4 out of 5 stars. 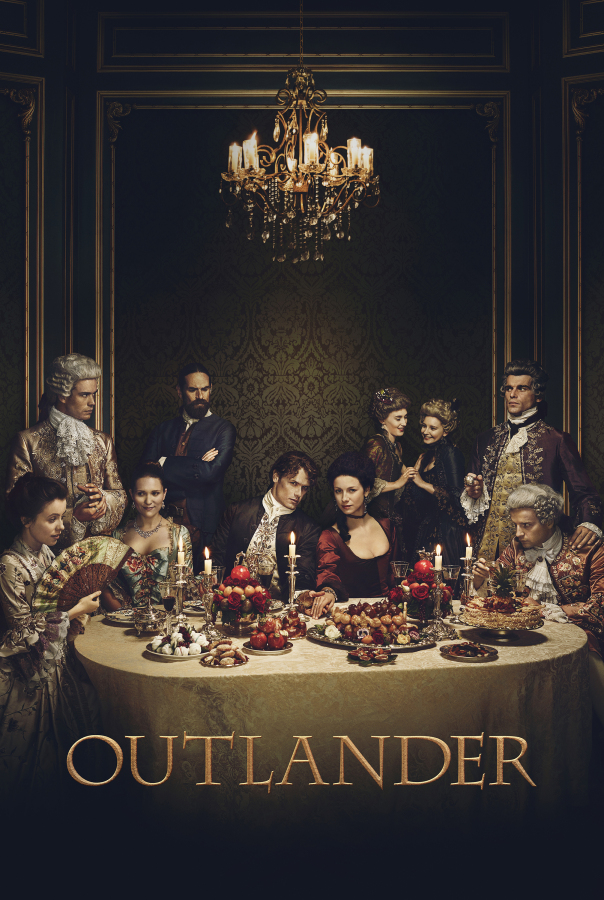