Starz series Outlander, for the most part, has always placed its audience in Claire’s narrative. Viewers see everything through her eyes, minus the one episode received through Jamie’s perspective, which is why fans feel such a strong emotional connection to her. When Claire fell to the ground in season two’s first episode and cried for Jamie, her pain and loss was felt. But, there seems to have been a lapse in the connection to her in Untimely Resurrection. Claire’s moral compass appears to be skewed and it is heartbreaking because of all the casualties created in the wake of her actions.  Claire asks Jamie earlier in the season if they are bad people and he assures her that they are doing a bad thing for a good cause. Yet, the cruelty of her behavior drives one to question her decisions. 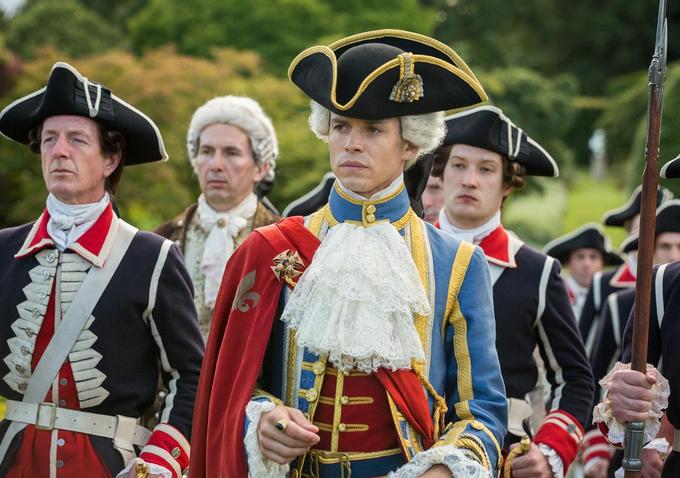 After the disastrous end to the dinner party of last week’s episode, Jamie and Murtagh spend the night in the Bastille, but are freed thanks to Duvernay. Unfortunately, Alex Randall remains in jail, accused of assaulting Mary Hawkins. Once Jamie returns home to a waiting and worried Claire, he lets her know that at least some part of the dinner worked, since Sandringham now has a disapproving opinion of the prince. There is some bad news too, having learned the prince left with the Comte St. Germain and no good can come of that.

Jamie and Claire try to figure out how they can prove the Comte was behind the attack, and after Claire tells Jamie the men identified her as “La Dame Blanche,” Jamie reveals the moniker was his creation to explain why he would not indulge in the company of the women of Maison Elise. Claire’s initial response is anger, having already been accused of witchcraft in the past, but soon realizes that the men who attacked her and Mary are most likely patrons of the brothel since they are aware of the rumor. Murtagh is sent to find evidence to link the Comte to the attack, but only learns that the gang is a group of aristocrats called Les Disciples, and their initiation includes defiling a virgin.

There is a tender moment when Claire goes to check on Mary, giving her some herbs to help her heal and assuring her that she is not pregnant.  Mary’s relieved in both that knowledge and the fact that the one good thing to come of her soiled position is the dissolution of her engagement to the viscount. She envisions herself marrying Alex and writes a letter explaining the events of the attack to get him released. Claire is entrusted with delivering the letter and, after she leaves Mary, considers burning it, knowing Mary must wed Jack Randall to ensure Frank’s existence. But, she delivers the letter and Alex is released, only to have Claire convince him that his poor health and current unemployment would only ruin Mary’s chances at a happy life (that is way harsh Claire).

Although Claire claims it broke her heart to separate a young couple in love, she seems resigned in her scheme to keep Frank alive. It is a difficult part to watch, knowing Claire is condemning Mary to a union with the monster that is Black Jack Randall. Claire’s manipulation and destruction of the happiness of others for the sake of Frank’s life is both disheartening in her conviction to do whatever she must regardless of the consequences, but shows her conviction to save a man that once was her only love. 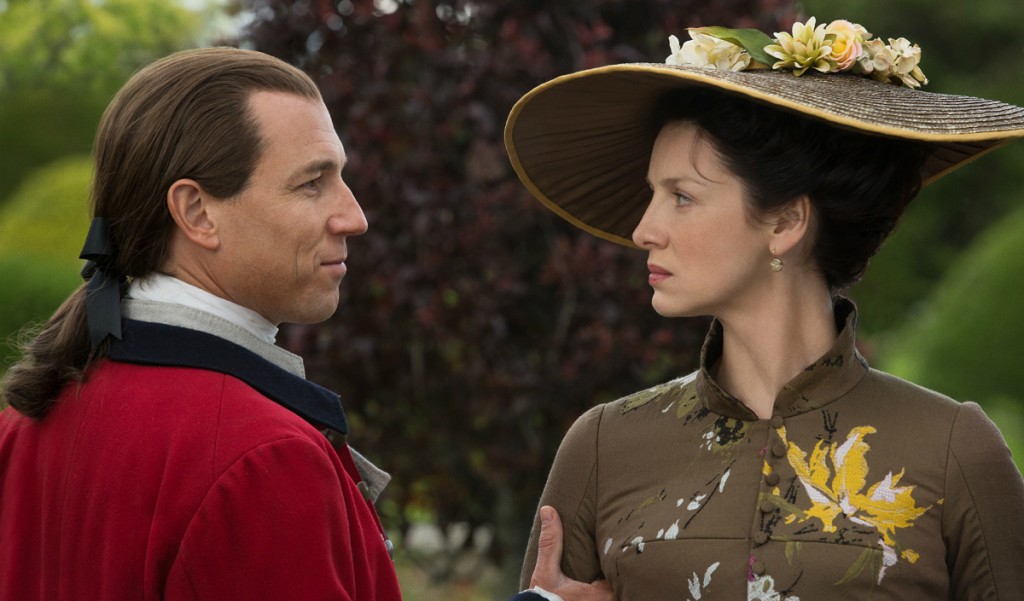 Meanwhile, Jamie is not getting the best news when he is informed by Prince Charlie that he is about to get his hands on 10,000 pounds, thanks to a newly formed partnership with St. Germain. Somehow, the prince has secured a loan and enters into an agreement with the Comte who wants to purchase a shipment of wine, but is in need of a business partner. The prince plans to use the profits to acquire ships and arms, and knows just the wine merchant to help him. Jamie is not too thrilled with his new role or the person he will need to deal with, but agrees to meet with St. Germain at Maison Elise.

The meeting between Jamie and St. Germain is full of tension, with Jamie threatening the Comte by telling him he will find the person responsible for poisoning and attacking Claire as well as Mary, and the Comte dismissing Jamie’s declaration with a grin, disclosing that he has no interest in Jamie’s personal life. The Comte also demands that the wine stay in his possession until Jamie is ready to present buyers, which Claire points out can work in their favor. She comes up with a plan to sabotage the shipment by using an herb to make it appear the ship is infested with smallpox. Claire is getting too good at scheming and it only makes one want to get her and Jamie away from France and back to Scotland pronto.

Speaking of Scotland, viewers are reminded of friends from the highlands in a sweet moment where Jamie gives Claire a christening gift, a set of apostle spoons Jenny sent from Lallybroch. Claire reveals her doubts about being a good mother, but Jamie eases her concerns, telling her whatever she does not know, she will learn, and later expressing his love for his brown-haired lass. The moment is short-lived because all hell is about to break loose.

The next day Jamie and Claire are at Versailles so Jamie can help Sandringham shop for horses. He is in his element while Claire is subjected to a walk with Annalise. Jamie’s ex cannot wait to point out how much he has changed, noting that Claire has turned Jamie into a man and there is a simplicity about him that is no longer there. It is a moment that would have been a perfect opportunity for a one-liner from Claire to put Annalise in her place, but she does not get the chance when Annalise points out a “dashing” man that seems taken with Claire. 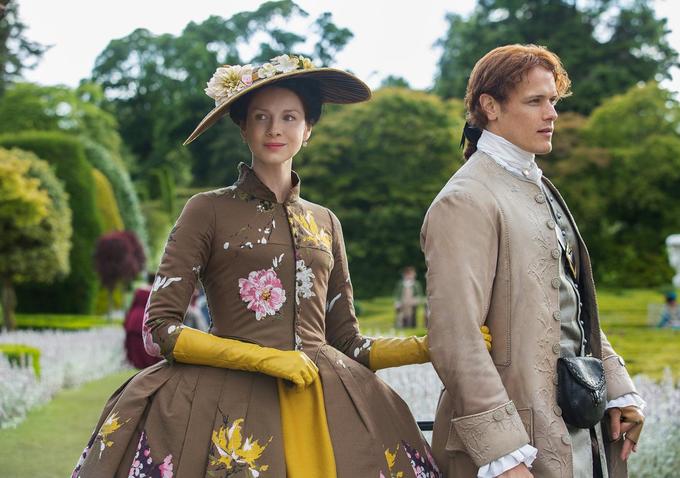 When Claire turns around, the man we all suspected is approaching and Claire’s shock and horror only amplifies the visceral reaction we have as Black Jack Randall struts his way over. Tobias Menzies is electric, as usual, as the ultimate villain. After Claire asks to leave, stating she is unwell, Annalise goes to fetch Jamie. The mere mention of Jamie’s name sends Randall into euphoria as he creepily asks Claire of the whereabouts of her husband. There is an excitement at seeing Claire as well as he speaks of how their fates are intertwined. Claire attempts to walk away but Randall grabs her arm and stops her just as King Louis XV approaches.

Claire is forced to introduce the king to Randall, but we soon find out that the king is not fond of the English, aside from Claire. He proceeds to humiliate Randall, at one point getting Randall to fall to his knees to beg on his brother’s behalf. Randall does not realize it is a joke, but everyone else is having a good laugh, including Claire and Jamie, who eventually shows up to the awkward meeting. Randall’s embarrassment is not enough for Jamie.

After Claire excuses herself and walks away, Jamie approaches Randall and challenges him to a duel, and we all cringe as Black Jack touches Jamie’s shoulder. Jamie smiles on his way back to the Fraser’s home, knowing he will have his chance at vengeance, but Claire has other plans. She goes to the Bastille and falsely accuses Black Jack as the assailant in the attack on her and Mary. It is a last ditch effort to save Frank, knowing she needs more time to convince Jamie not to kill Black Jack.

The final scene between Jamie and Claire is both powerful and tragic. Claire asks Jamie not to kill Randall, revealing Black Jack needs to stay alive so he can father Mary’s child and secure Frank’s lineage. It is a hard pill to swallow for Jamie, who needs to kill Randall for his own sanity. He asks Claire to choose between him and Black Jack and she asks that he wait a year, claiming he owes her a life. It is a low-blow, especially knowing that Jamie endured the torture and rape from Black Jack to save Claire. But, although he feels betrayed by his wife, Jamie agrees, saying he is a man that pays his debts. When Claire places her hands on his, he tells her not to touch him and walks across the room facing away from her, the connection that had just been repaired broken again and the space between them widened significantly. CrypticRock gives Untimely Resurrection 4 out of 5 stars.