Real Housewives of 18th Century Paris is not quite the life Claire Fraser thought she would be living while attempting to thwart the Jacobite rebellion. Her life amongst the Parisian elite is proving to be rather dull, and her husband is completely oblivious to her plight. In Outlander’s new episode Useful Occupations and Deceptions viewers find Claire alone as she spends most nights, while Jamie is burning the candle at both ends, running Jared’s wine business by day and carousing with Bonnie Prince Charlie at the Maison de Madame Elise by night.

In the brief moments she does see Jamie, they are almost never alone, talking about their plans openly in front of the servants. In a rare moment of attempted affection, Jamie tries to give Claire a kiss, but she turns her head, turned off by the scents of the brothel. There is a distance growing between the two, with Claire needing purpose and Jamie struggling with the responsibility of going against his nature to uncover the Prince’s secrets. 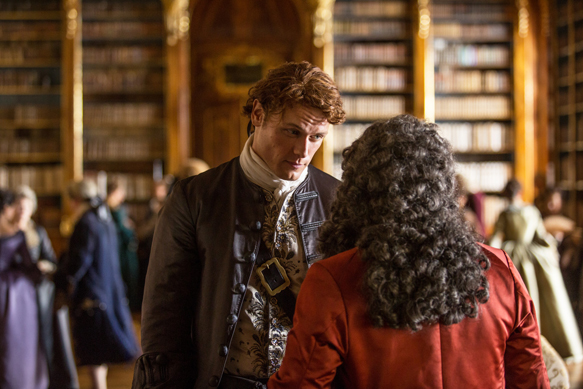 As Jamie once again leaves Claire to join “her ladies” for tea, he notices he is missing his wooden snake and charges Claire with the task of finding it. Claire watches him walk out and it is obvious she is frustrated by her boredom and Jamie’s assumption that she is completely fine with the role of socialite. What is a modern, hormonal pregnant woman who has her own secret boiling underneath the surface to do? Before she can find an answer, Claire learns a relevant piece of information that only adds to her inner turmoil.

At a card game with Louise and the very naïve Mary Hawkins, Mary blurts out that she cannot marry a French man because she has heard what they do in bed. Louise and Claire are both amused by Mary’s declaration, with Louise having a good laugh. Mary’s youth and utter cluelessness about intimacy and human reproduction prompts Claire to suggest they have a talk (it’s about time she learned about the birds and the bees).

But soon, it is Claire that is in shock when Mary reveals she is from Sussex. This bit of information triggers a flashback to a loving Frank and Claire discussing his family tree, and Claire remembers that Mary Hawkins will marry Jonathan Randall. The shock Claire feels at the realization that Frank’s existence depends on the union of Mary and Black Jack Randall only increases her conflicted feelings of telling Jamie that he is still alive.  She knows if she tells him, it could set Jamie on the path of revenge, but in order for Frank to be born, Randall must stay alive for another year.  This is why one does not mess with the Space Time Continuum! 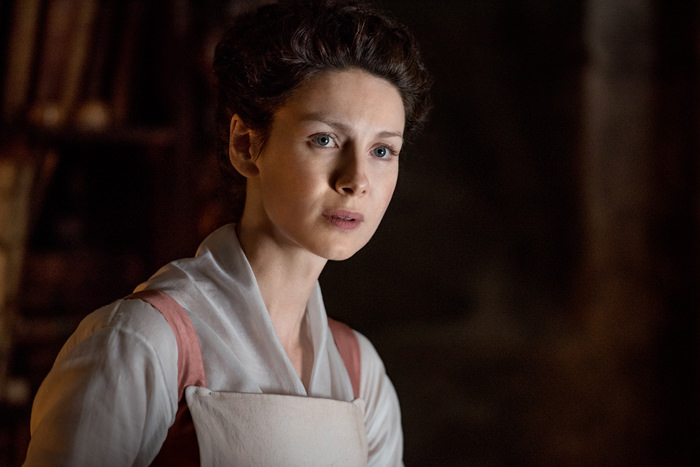 After Claire searches for her maid, Suzette, and finds her having a romp in the sack with Murtagh, a clearly irritated Claire defensively tells Murtagh to mind his own business when he points out she is being uptight. Claire quickly apologizes for losing her temper, explaining that she is not herself and confides in Murtagh, revealing that Jack Randall is alive. A stunned Murtagh urges Claire to keep this information from Jamie for fear he will run back to Scotland to seek vengeance. Claire agrees even though it is contributing to the rift that has been diminishing her and Jamie’s once strong connection.

Meanwhile, Jamie, in the midst of a chess game with Duverney, tries to convince the minister of finance to meet with Prince Charles and succeeds after divulging that he does not want the prince to acquire the necessary funds because Scotland cannot bear another failed rebellion. Duvernay is apprehensive, stating that he cannot meet with a monarch that is not recognized by the king, but Jamie has a solution as their meeting would be held at the Maison de Madame Elise.

In an effort to prevent unwanted pregnancy, Claire goes to Master Raymond’s in search of birth control for Suzette and runs into the Comte St.  Germain. Their interaction is a reminder that the Comte still harbors disdain for Claire and his devious smile seems foreshadowing.  This man definitely has something up his sleeve. In Master Raymond’s shop, Claire speaks about the conventional turn her life has taken and her desire to do something more meaningful, which leads Master Raymond to suggest she visit L’Hôpital des Anges, a charity hospital run by nuns. When Claire gets to the hospital, it is clear she immediately knows this is where she needs to be.

Harry Potter fans rejoice! We soon meet Mother Hildegarde, played to perfection by Frances de la Tour. She assumes Claire is at the hospital for one of her servants, but Claire admits she is there to offer the service of her medical knowledge and skills. Mother Hildegarde is skeptical until she sees Claire diagnose a case of diabetes, or “sugar sickness” as it was called in the 18th century.  After witnessing Claire’s “urinoscopy” skills, Mother Hildegarde’s impression of Claire begins to change.

Unfortunately, Jamie is not fairing as well, learning that Prince Charles claims to have accrued the majority of funds necessary for the war during the Prince’s meeting with Duverney. A distraught Jamie comes home seeking Claire’s comfort and guidance, but she is still at the hospital. After hours of waiting, Claire returns home feeling invigorated and cannot wait to tell Jamie about her day, but Jamie is not happy about Claire’s new occupation.  He is concerned about her catching a disease and the safety of the baby in addition to needing her counsel, revealing his feeling that this plan that Claire has concocted has fallen solely on his shoulders. Once again, we see the toll secrets have taken on Jamie and Claire’s relationship. 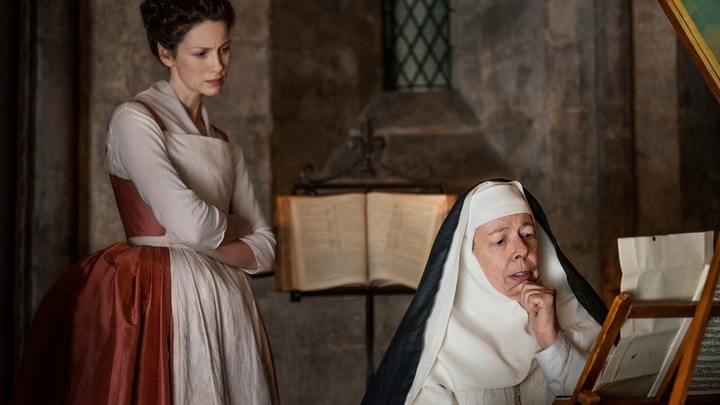 Jamie finally tells Claire about the day’s findings, which she finds hard to believe since France and England are not supposed to become allies for another century. Jamie and Claire are unable to find common ground, their fight ending in Jamie returning to the brothel that has become his unwanted second home. While there, Jamie notices a young pickpocket making the rounds, which gives him an idea. He chases after the boy and when he catches him, he not only offers the young man a job, but finds the wooden snake that went missing.

Back at the Fraser’s home, Claire meets the young pickpocket, who freely compliments her breasts, and learns of Jamie’s plan for the boy, who he names Fergus (Romann Berrux: Détectives TV series) after the two agree his real name, Claudel, is not manly enough. Jamie seeks to use Fergus to intercept letters to Prince Charles so he can gather information. After weeks go by with Fergus delivering mostly coded letters, not much has been ascertained until a suspicious sheet of music has Murtagh and Jamie wondering if this could be the message they have been waiting for. Jamie remembers Claire telling him that Mother Hildegarde is a musical prodigy and so he goes to the hospital to speak to the nun.

Jamie arrives shortly after Mother Hildegarde’s disease-sniffing dog, Bouton, helps Claire diagnose the cause of a healing patient’s infection. We soon see Mother Hildegarde playing the sheet music, which she remarks is similar to the music of an old friend of hers, Herr Bach. No big deal.  She is just friends with THE Johann Sebastian Bach. As Claire makes the connection, she almost gives herself away by recognizing Bach’s name. Mother Hildegarde also notes the many key changes in the song, which she finds odd, and this leads Claire and Jamie to the realization that the “key is the key” to solving the code.

Jamie is then able to decipher the code which confirms Prince Charles has garnered funds from three partners, but has exaggerated the amount.  The letter also has an extra letter, an “S,” which is most likely a signature. The light bulb goes off simultaneously for Jamie and Claire and it is a great moment where we get to see them connect again as they realize the “S” stands for Sandringham. While Jamie is overjoyed that they have finally made progress, toasting to Claire and finally showing affection, Claire is disheartened that Jamie will have to learn of Jack Randall’s survival sooner than later, but decides not to ruin his happiness just yet. CrypticRock gives Useful Occupations and Deceptions, 3.5 out of 5 stars. 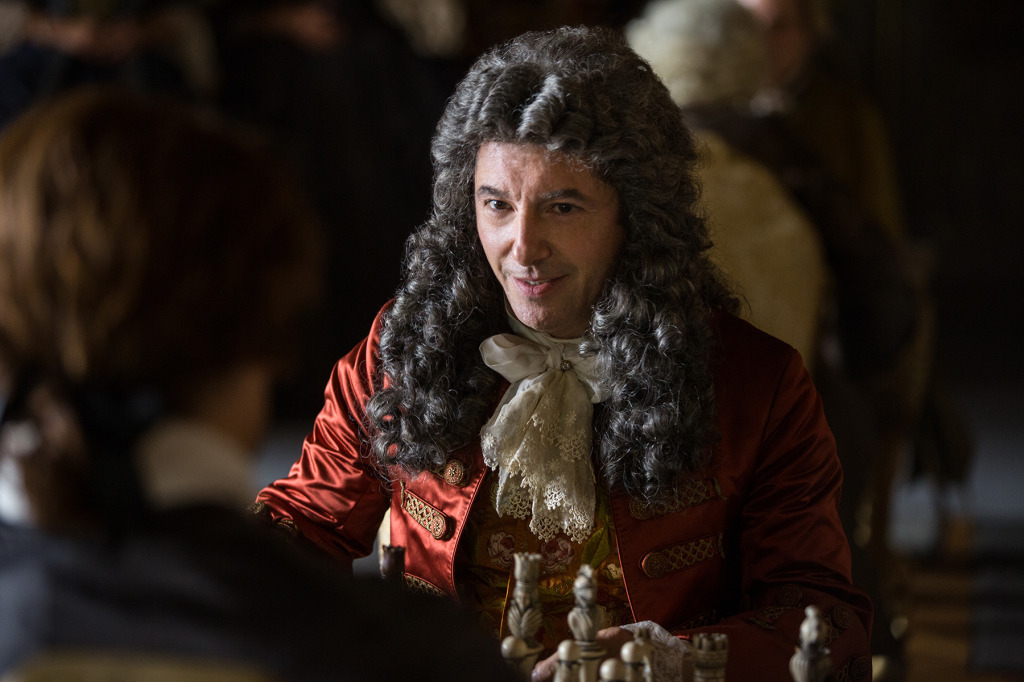