Off with his head! That was the foreshadowing we were given in the opening moments of STARZ Outlander’s eleventh episode, Vengeance is Mine, as fans watched a powdered wig fall. And, like that wig, a head did fall in the final moments of an episode where Claire, Jamie, and Mary all claimed justice for the terrible things they endured. Things that were either directly or indirectly caused by one deplorable man. Before viewers given one of the most satisfying deaths of the season, they see Jamie and Claire tested once again as they are separated and must find their way back to each other. 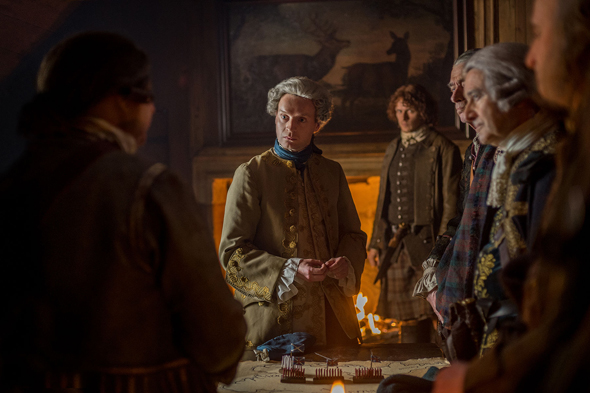 After Prince Charles and his army’s victory at Prestonpans, the prince is pretty confident as the Jacobite army has made its way into Northern England. While the leaders gather to discuss their next move, Claire performs some dental work because a girl needs to keep busy. Meanwhile, Charles believes the Jacobites can take the city of London, which is only a five days’ march away, trying to convince his advisors that they have God on their side. Jamie, knowing London could mean a change in the course of history, tries to throw his support to the prince, telling all the men gathered, “if we turn back now all hope that currently resides in the hearts of our supporters will be full of doubt and fear.” His words do not do much to sway the advisors and as he leaves the meeting and finds Claire, he pledges not only to see all his men safely home to Lallybroch, but to ensure her safety at any cost.

That night, Jamie says a prayer for Claire while she sleeps. It is a beautiful and tender moment as we watch Jamie pray for Claire’s life to be protected, no matter where or when she is living it. The next morning Dougal storms into Jamie and Claire’s room and gives them some bad news. He reveals the prince’s generals have ordered Jamie and his men to ride to Inverness. Those slimy little suckers basically exiled Jamie and Dougal because of Jamie’s influence on Charles, and before Jamie has a chance to talk to the prince, he learns that Charles has already left with Jamie’s horse.

Jamie and his men, along with Claire, take their marching orders, but along the way they are attacked by Redcoats, leading to a severe injury to Rupert’s eye. They find sanctuary at an abandoned church, where Claire performs surgery on Rupert so the bullet will not reach his brain. Fergus supplies Claire with a knife to do the job and she successfully removes the piece of metal from Rupert’s eye, but it is not long before the torch-bearing British army finds them and threatens to burn down the church if the Highlanders do not surrender. Jamie tries to offer himself, knowing there is a price on his head, but Claire will not let him sacrifice himself and offers to be their hostage, since she is an Englishwoman and they would not hurt her. Jamie refuses to let her go, but Claire reminds him that she is Lady Broch Tuarach and she has a right to protect her people. Jamie reluctantly agrees and Dougal is sent out to make the negotiation. 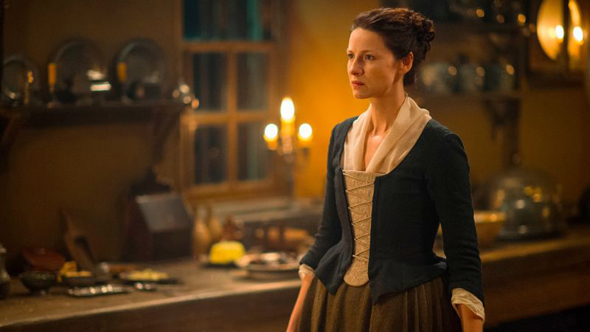 Dougal goes out to speak to the Redcoats and agrees to give up their horses and weapons in exchange for a safe departure. The British agree to the terms, and since Jamie would be easily recognized as Red Jamie, it is up to Dougal to bring Claire, who pretends to have fainted, to the British. She promises Jamie that they will find each other again and to trust in that, and then off she goes. Murtagh and Jamie set off to the closest English garrison, which they tell Claire is where the Redcoats are likely to take her. But, to Claire’s surprise, they stop at a pub for the night since the hour is late. While outside, Claire notices a familiar face in the form of Hugh Munro.

The next morning Claire uses that coincidence in her favor when she finds out the Redcoats have changed their plans regarding their destination and are taking her to Belmont. She makes sure Hugh hears the information so he can pass it along to Jamie. It is a good thing she does because when Claire arrives at Belmont, she is taken to the home of the Duke of Sandringham. Claire, who uses her maiden name, is surprised to see Sandringham and that he does reveal her true identity.

Sandringham is as cunning and two-faced as ever. Over dinner, Claire asks why he did not reveal her secret and he lets her know his self-serving reason. He is still suspected of being a Jacobite and is being watched by the British, but insists his allegiance does still lie with the Jacobites, which is why he needs Jamie to come and rescue them both. He tells Claire their only chance is to send his envoy to Jamie to warn him about the Redcoats surrounding Sandringham’s home, but that in return she must ensure the duke’s safe extraction. Claire agrees and writes a message to Jamie in Gaelic, which she asks to be delivered to Hugh Munro.

But, Sandringham is not the only familiar face Claire sees. Mary Hawkins is also there and she just so happens to be the duke’s goddaughter. She is been staying with Sandringham before she is to be married off to Mr.  Granger, which she is not happy about, but is forced to accept because she is considered “soiled goods.” Mary also asks Claire for help and provides some useful information because Claire figures out that by marrying Mary to a British loyalist, Sandringham will be able to continue to his opportunistic ways and play both sides. 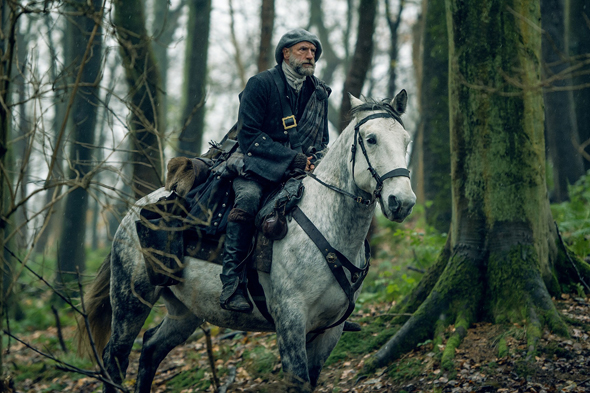 Claire’s letter makes its way to Hugh who eventually finds Jamie and Murtagh.  Jamie can barely read the letter because of Claire’s broken Gaelic, but gets the gist of what is happening.  He knows she is with Sandringham and he, along with Munro and Murtagh, head to the duke’s estate to rescue Claire.  Back at Sandringham’s, Claire is waiting to speak to the duke on Mary’s behalf when she meets Danton, the duke’s valet. She notices the birthmark on his hand, which is the same mark she saw on the man that raped Mary. Claire realizes it was Sandringham and not the Comte that arranged her assault, but when she accuses the duke, his defense is that the Comte wanted her dead and he negotiated rape in exchange for the Comte forgiving an owed debt. Not only does he reveal that detestable piece of information, but also that his plans to get Jamie to his estate is really a trap so he could convince the British he is still loyal to them by turning over Red Jamie.

Claire is then taken and locked in her room, but she sees Hugh through the window and tries to figure out a way to warn him. While Claire tries to look for a way out, Mary enters the room and Claire asks her to go outside to warn Munro, but Mary cannot fathom the idea of speaking to a filthy beggar. Claire decides to do it herself but once she makes her way down to the kitchen and tries to make her way out, Sandringham is there having a midnight snack. The duke, sans wig, begins to ask Claire about the Comte’s death and how it all really went down. Mary interrupts their conversation claiming she came down because she was hungry, but the duke orders her to go to bed.

After leaving the kitchen, Mary heads for the front door, but when she opens it she finds a British soldier who is then knocked unconscious by Munro. Mary quickly warns the beggar that Claire is in the kitchen and that Jamie’s arrival is a trap.  Just then, Mary is seen by Danton who drags her to the kitchen to notify Sandringham. Mary tries to convince the duke that she was trying to run away because she cannot marry a man she does not love, and it is not long before Jamie bursts in.  The duke rushes to put his wig on and Danton quickly grabs Claire, holding a knife to her throat.  Jamie is forced to put his dirk down, but Murtagh’s entrance distracts Danton, which Claire uses as an opportunity to break free from the valet’s clutches.  She yells out Danton’s identity as the Frenchman that assaulted her and Mary, but Danton tries to redirect the blame on Sandringham stating he was the mastermind behind it all. Sandringham attempts to deny that he suggested the act of rape and that he only meant to scare Claire, but Claire insists it was his idea.

While Jamie holds the duke by his throat, ready to make him pay, no one notices Mary grab the knife from the kitchen table and stab Danton, getting her vengeance on the man that stole her innocence. Everyone in the room turns in her direction, including Sandringham, who then tries to escape while the others are distracted. But, Sandringham forgot about Murtagh who is still standing at the back of the room, ready with an ax. Murtagh then finds redemption for not being able to protect Mary and Claire that day on the streets of Paris by chopping off the duke’s head. It is a bloody, deeply gratifying moment as Murtagh literally lays vengeance at Mary’s feet. After a moment of silence, Mary finally says, “I think we’d better go.” Jamie agrees and they leave behind Sandringham’s lifeless corpse along with all the terrible things they suffered at his hand. With all that said, CrypticRock gives Vengeance is Mine 4 out of 5 stars. 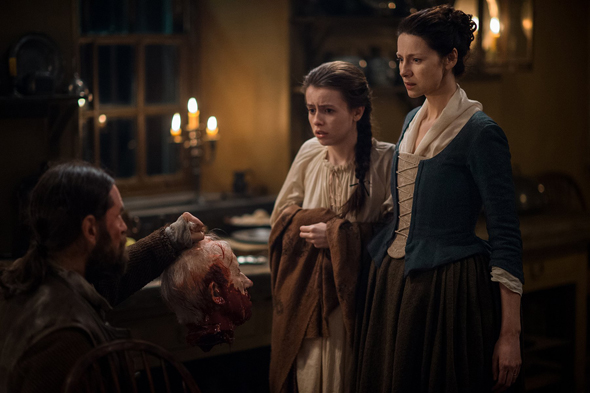