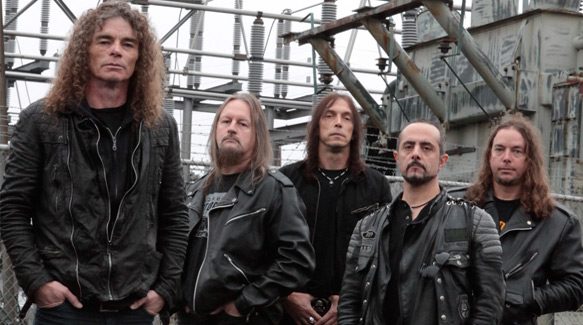 It is 2017 and the wheel grinds on. Overkill have been a staple of American Thrash Metal ever since their New York City beginnings way back in 1980. It has been the usual bumpy road, the band dealing with its share of lineup changes, health scares, and troubles with substance abuse. With this in mind it is no surprise that founding duo Bobby ‘Blitz’ Ellsworth and D.D. Verni have come through it all unscathed and still hungry for more.

Together, the vocalist and the bass guitarist have soldiered through it all, to the tune of seventeen studio albums, numerous world tours, and the unwavering respect of the finicky Heavy Metal underground. Album number eighteen arrives here in the winter of 2017, as unapologetic as Blitz’ middle-finger snarl. Thus, on February 10th, The Grinding Wheel rolls in once more courtesy of Nuclear Blast Records, ready to crush all comers and trendy passersby with one more steel and leather nod to true Heavy Metal. The only question is will it crush and destroy or is the wheel beginning to go flat as the years pass by?

Anyone familiar with Overkill’s career path would probably laugh at the notion that this band will somehow lose the thread. Unlike some of Thrash Metal’s more popular American icons – the bands who comprised the slightly less commercial segment of the genre such as Testament and Exodus – have generally stayed true to the path. It could be because they never quite crested the wave of super-stardom achieved by Metallica and Megadeth. Perhaps they never crested that wave because to do so would have meant losing the danger, the speed, and the rebellion that fed the fire to begin with. Overkill not only still have that fire, they appear to be getting angrier and more surly as the decades mount.

Following right on from previous album, 2014’s killer White Devil Armory, Overkill jump right back to business with album opener “Mean Green Killing Machine.” Drummer Ron Lipnicki sets the pace as guitarists Dave Linsk and Derek ‘The Skull’ Tailer belt out some muted chords. The ever present rumble of D.D. Verni’s bass guitar (still one of the best four-string sounds in metal) sets the stage for Blitz to spit his we don’t give a f**k calls to arms. Overkill has maintained the same lineup now since 2005. Their tightness and intent is indisputable. This first song is on the longer side and within its 7 and a half minutes the band treats fans to a break featuring some cleaner vocals, and a bluesy mid section with some whoa-oh-oh’s thrown in for good measure. The dynamics and creativity stand out, the bones of the song reminiscent of Persistence of Time-era Anthrax.

Fans of thrash metal will appreciate the sound Overkill have mastered. “Goddamn Trouble” goes more balls-out until “Our Finest Hour” cranks forth. Arguably the album’s finest hour as well, the song truly blends Blitz’ venomous vocal delivery with their cutting thrash and a most singable bridge/chorus section. Blitz must be sipping from the fountain of youth because he sounds as vital and energetic as he did back in 1984.

As The Grinding Wheel spins on, the Overkill train makes some stops into bluesy and even Cock-Rock or Glam territory, at least lyrically. “Let’s all go to Hades” and “Come Heavy” are catchy, if a bit less vicious. The messages in the former resonate so well with the insanity going on in the world, though. For the most part Overkill stick with the speedier, double-bass heavy thrash that has punctuated most of the material on their last several releases. “Red, White, and Blue” brings it right back to the rhythm sections of Metallica’s first album. The shouted chorus and blasting heavy runs which follow it get that pulse up fast. These veterans know how to thrash hard!

The bad-assery continues on “The Wheel”: there is an obnoxiousness to Blitz and the boys that is so uniquely Overkill, and this song is chock full of that attitude. Catchy and slower in parts, speedier with sick soloing in others, it ticks all the boxes and brings a lot of heart to the affair as well. The band isn’t simply making songs that they think their fans would expect of them. There is absolutely no feeling of ‘Well, we are all in our ’50s playing golf but we have to sound like pissed off teenagers in order to sell records.’ No, with songs like “The Wheel” one gets the distinct feeling that if Overkill ever found themselves in a country club, they’d be getting escorted off the premises by security. And that is exactly what makes them so appealing in a world of empty rhetoric and false imagery.

The title track shows the boys getting bluesy again; Blitz has some pipes for more than just that signature high-pitched sneer. It is a nice dynamic change of pace and helps to balance things out. The way in which the band goes from these slower parts to speedy runs over which the solos frolic – while Lipnicki sprinkles in the lightning footed double-bass action – is most pleasing.

Perhaps a bit more introspective and wider ranging thematically than their last album, Overkill has once again defied the odds and made a passionate, quality album with The Grinding Wheel. It has a little something for every fan of traditional Heavy Metal and Thrash. There is still a heap of poison left in that sickly green logo, and The Grinding Wheel sits proudly in Overkill’s expansive discography. CrypticRock gives this album 4.5 out of 5 stars. 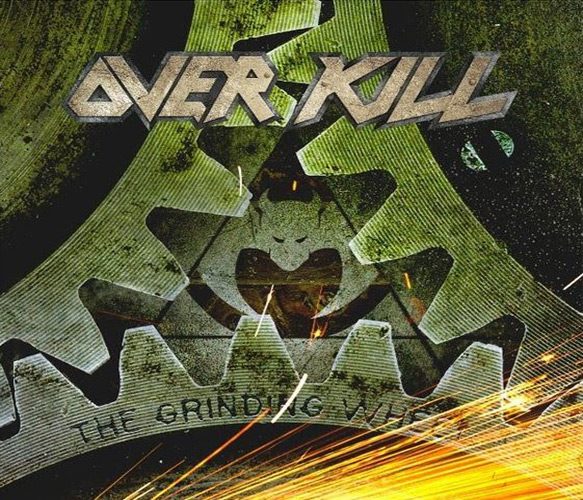