In the early ’80s, young women first became empowered by celebrating and imitating one of Rock’s premiere female vocalists who pounded, roared, and fought her way into their hearts and up the male-dominated music charts. There were only several others of the kind – women who could make girls tougher then, and now; the late Janis Joplin, Heart’s Ann Wilson, and another mezzo-soprano and Long Island native, Joan Jett.

Pat Benatar was in every way a fearless feminist who made her own rules and blazed her own trail. She broke industry standards in Rock-n-Roll and New Wave both as a female vocalist and as a singer/songwriter. She has won four Grammys, earned nine nominations, two Multi-Platinum albums, five Platinum albums, three Gold albums, and had 19 Top 40 singles, including the Top 10 hits; “Hit Me With Your Best Shot,” “Love Is a Battlefield,” “We Belong,” and “Invincible.” She has also been inducted into the Long Island Music Hall of Fame.

This First Lady of Rock’s reign is true and irrefutable. Born Patricia Andrzejewski in Brooklyn and was raised in Lindenhurst, Long Island, Pat Benatar began as a hometown girl who began singing in elementary school and continues to master her undeniable artistry today. Honoring her roots, she returned to The Paramount in Huntington Village on Long Island, Wednesday, April 11, 2018, for a very intimate acoustic evening with her songwriting partner of over 40 years, musician, producer, arranger and husband, Neil “Spyder” James Giraldo.

No stranger to the soil of Long Island, Benatar has also made her visits to The Paramount consistent to the delight of fans. Performing to yet another packed house, a steadfast fan might have felt uneasy at the initial sight of Benatar sitting stationary perched on a stool in her leather pants and polka-dotted shirt appearing passive to Giraldo who is standing and alternating between playing his guitar and piano. The image they create together, initially conflicts with the independent fighting spirit that attracted and liberated original Benatar fans. Within moments, Benatar’s adulation for Giraldo grows while her self-reliance and dominant vocal range becomes majestically apparent.

At 65 years old, Benatar looks and sounds timeless, even without a full band. Her voice is strong, big, and unlimited in range. Giraldo remains so eager to please, while endlessly and enthusiastically providing the necessary accoutrements and layered acoustic instrumentation. Together, they shared personal and intimate short stories between songs, one never dominating the stage or tone over the other. Today, Benatar is seemingly content and comfortable in her role as an equal half of the whole. The audience also appreciated the mutual love and admiration that was clearly evident between this powerhouse couple.

They opened the show with “All Fired Up” a pounding song that once represented optimism, that now feels to be filled with Benatar’s knowing wisdom, “Now I believe there comes a time, When everything just falls in line, We live and learn from our mistakes, The deepest cuts are healed by faith.” Fans were pumped up as Giraldo keeps the enthusiasm going by strumming his acoustic electric guitar and providing backing vocals to the haunting hopes of “We Live For Love” that showcase Benatar’s mezzo-soprano heights. 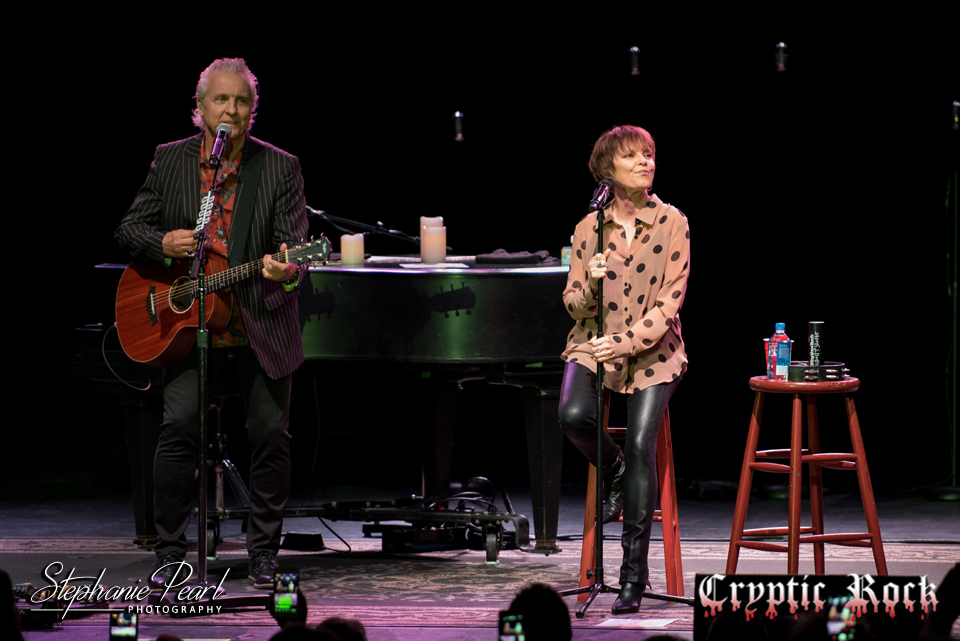 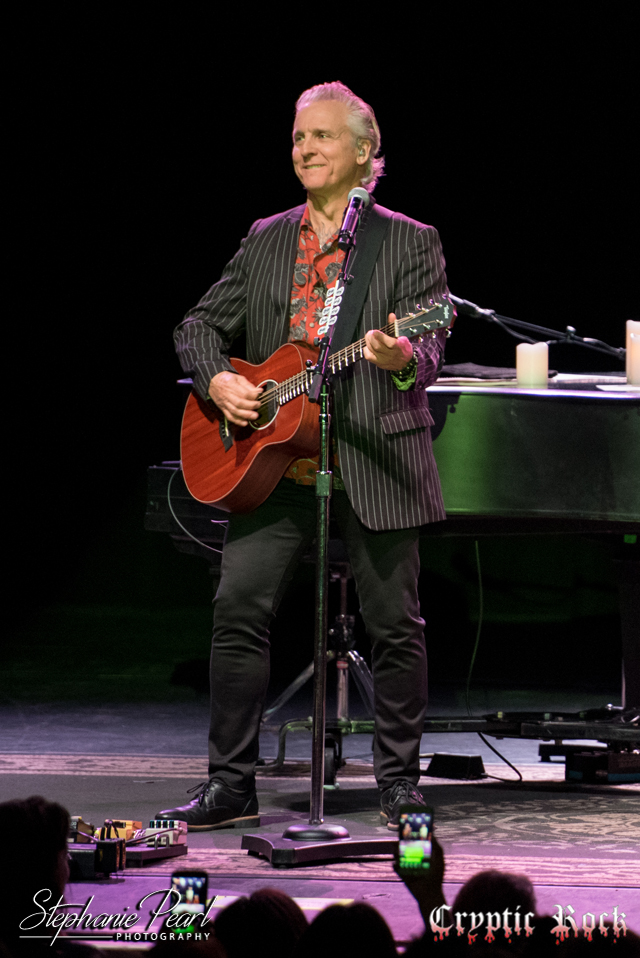 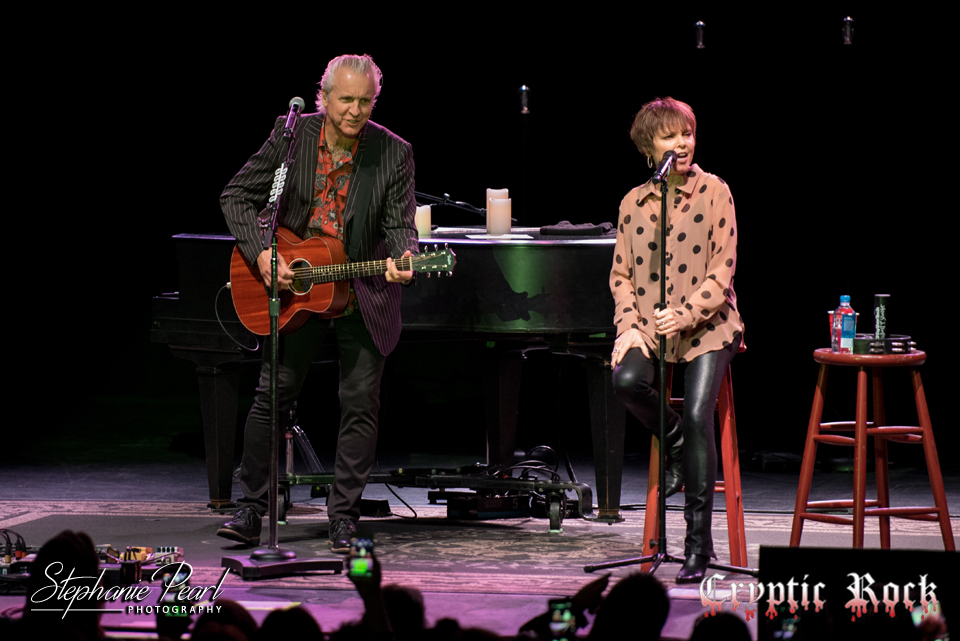 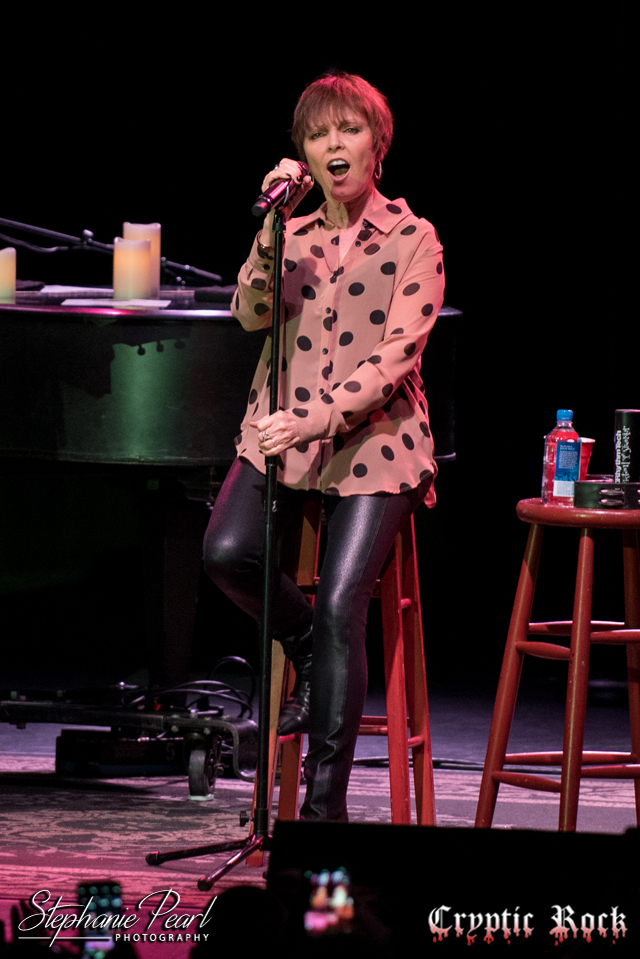 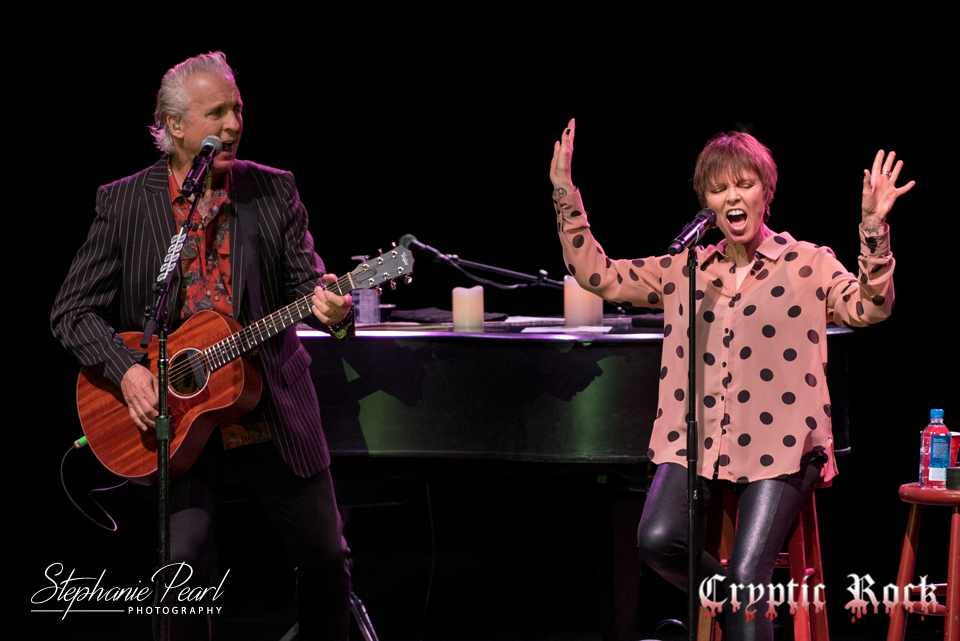 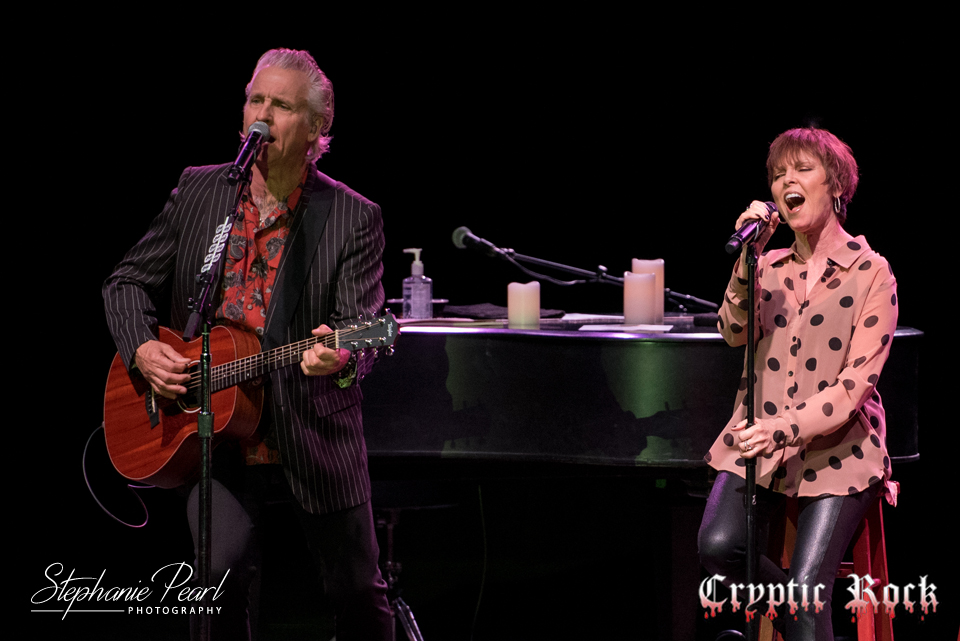 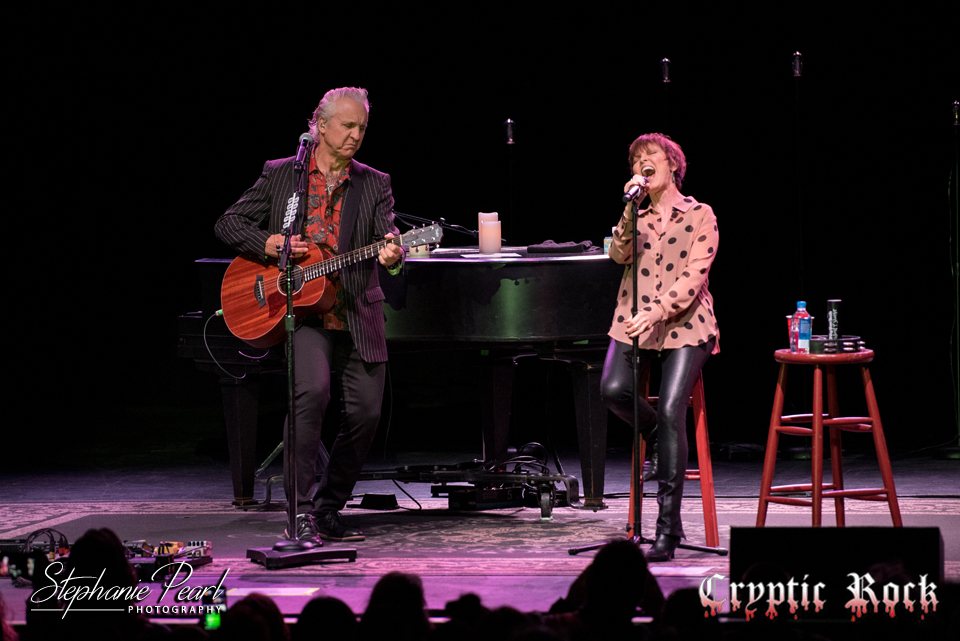 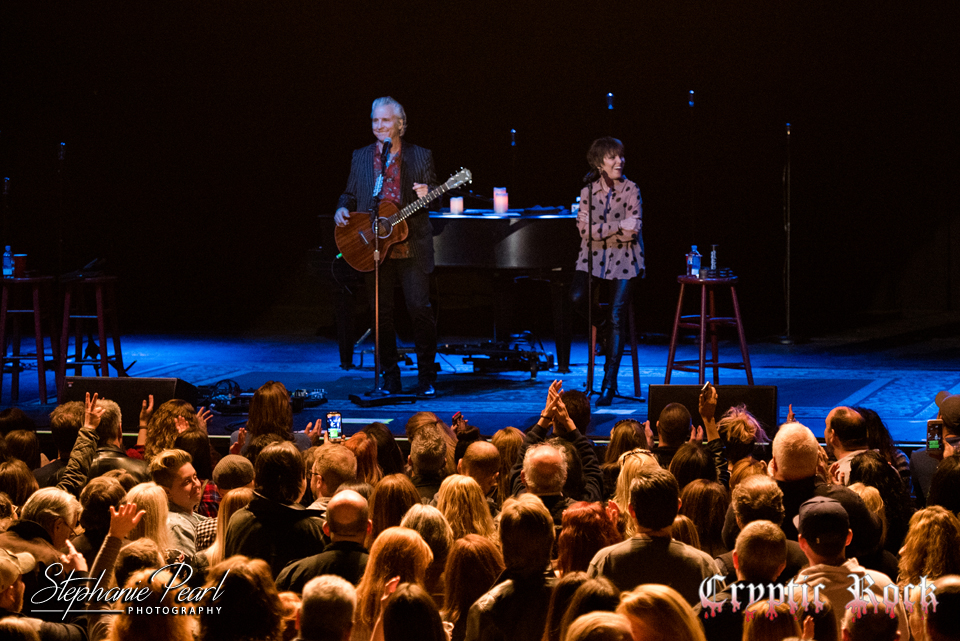 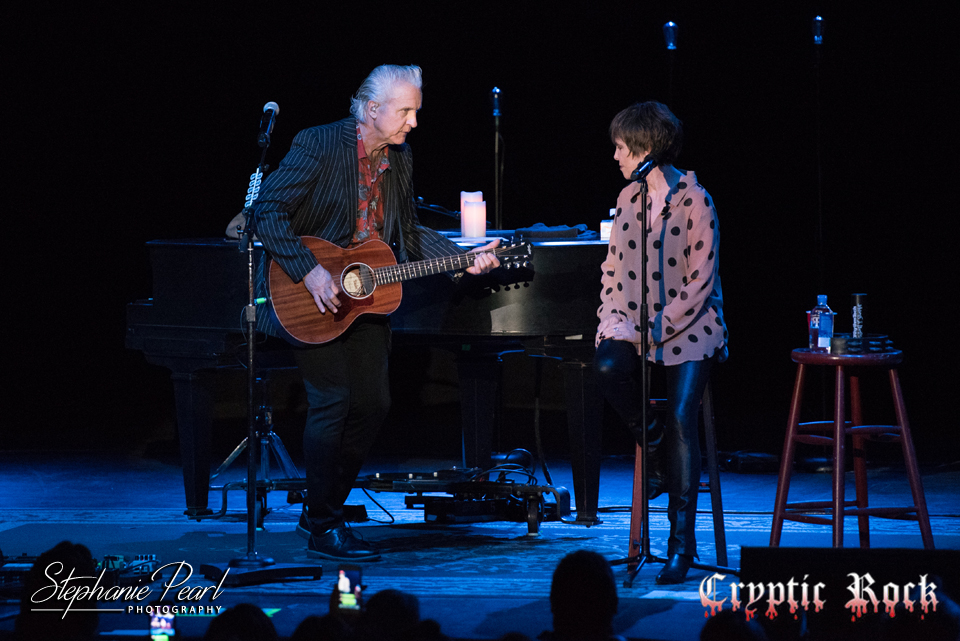 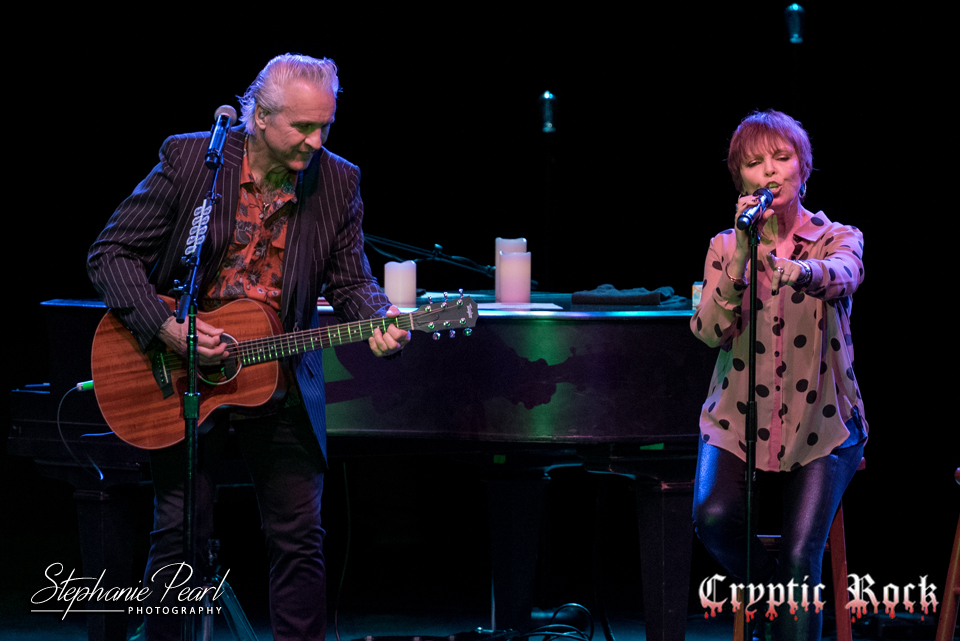 In his striped blazer, Giraldo, or “Spyder” as Benatar affectionately refers to him, moves to the piano for the intro to their third song, “Promises In The Dark.” Benatar talked about how it all began and their successful marriage that has lasted over three decades. With a slight rasp to her voice, the audience sang along as Giraldo returned to his guitar and characteristically flicked his pick far into the audience. Local legend has it that one of Giraldo’s flying picks poked a fan, coincidentally from Benatar’s hometown of Lindenhurst, in the eye, then splashed into her drink. The fan had to wear an eye patch for a couple of weeks and in honor of the occurrence, friends renamed her “Patch Benatar.”

Benatar continued with their set, affectionately speaking about their oldest daughter who was married 8 ½ months ago and their Christmas news of a baby girl on the way that will make Benatar and Giraldo first-time grandparents. Benatar jokingly, but believably announces, “I’m going to teach her to be a badass,” which her heavily concentrated female audience immediately approved and celebrated with loud cheers. Giraldo, who affectionately refers to Benatar as ‘Patricia,’ introduced a song he wrote after their own daughter’s birth, “Run Between The Raindrops.” Possibly too subtle for the heavily attended venue, chatter broke out among the audience on the general admission floor, making it difficult to hear.

Continuing on, Benatar, remained sitting and leaning on her stool, and Giraldo, who remained upright with his guitar, performed “We Belong” backed with a percussion track, then continued into “In These Times,” and then “You Better Run,” the second video to be broadcast on MTV and established Giraldo as the first guitarist to appear on their music channel. From here, the couple continued with a solemn new song entitled, “After the Fall,” which was beautifully accented by backlights appearing as candlelight or orbs enhancing the lyrics; “the flame of love that lingers hiding in the darkest place.”

Thereafter, “Invincible” received a strong response as the audience clapped along; Giraldo admiringly speaking of Bo Diddley and the greatest beat in Rock-n-Roll, and then they performed “Ties That Bind” and “Love Is A Battlefield,” which instantaneously sparked up the wall to wall crowd who were now radiating with the glow of cell phones in record mode.

By this point, crowd members were taking group pictures, reuniting, and reminiscing, as Benatar and Giraldo’s full power encore begins with “Heartbreaker.” Benatar stood straight up for the song, then transitioned into a medley of “Ring of Fire” and “Don’t Slander Me” then back into “Heartbreaker.” Enthralled in the performance, she punched the air only from her elbows to her fists, containing herself from the full arm thrust, but freeing every incredible and undeniable vocal ability she possesses.

Throughout the night, it was obviously apparent that Neil Giraldo is the producer and arranger of the show and songs, as his wife, Pat Benatar, fondly and adoringly takes his every lead. That in mind, this special unplugged evening with Pat Benatar and Neil Giraldo not only unveiled a deeper side to this couple’s intricacies and intimacies, but also revealed that regardless of how big or small the stage or her band, Pat Benatar’s vocals still command it all. Not to mention that it is truly impressive and commendable that as a couple, together they have managed to withstand the tests of both fame and time.

In enough words, Benatar and Giraldo, are an inseparable partnership and astounding power couple aged to music perfection. Now, if only the Rock and Roll Hall of Fame would catch on. 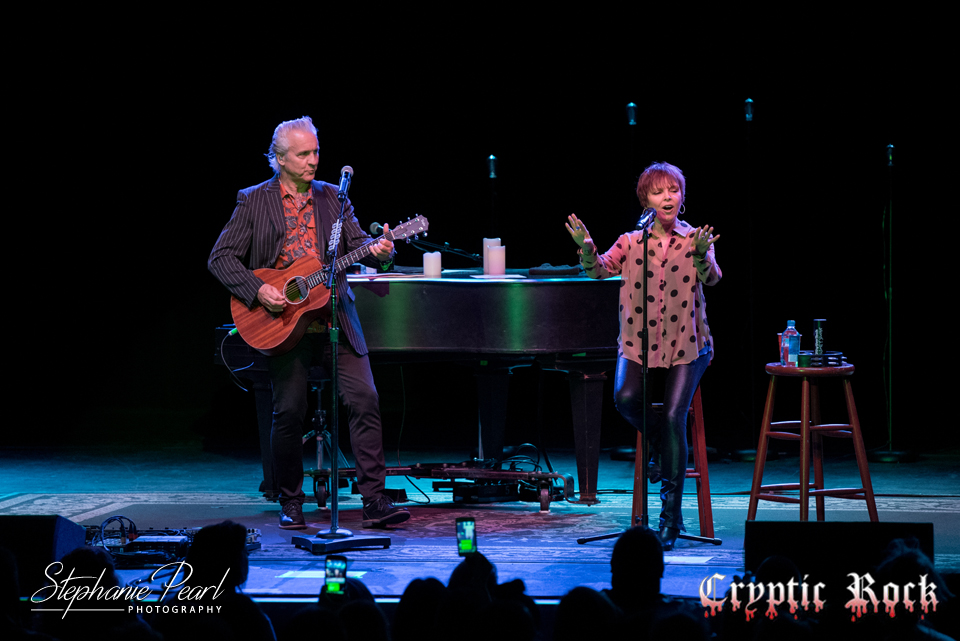 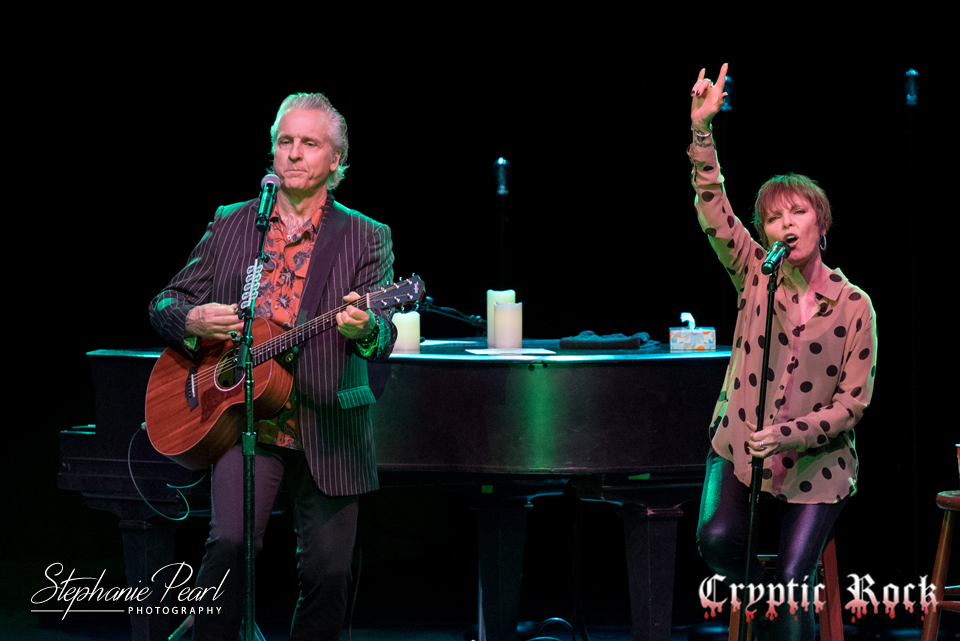 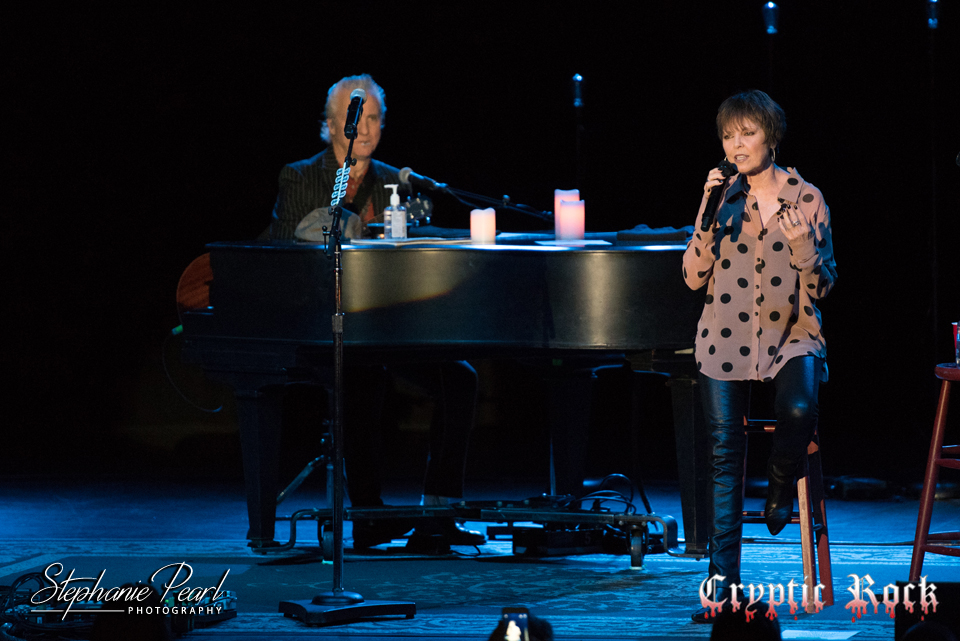 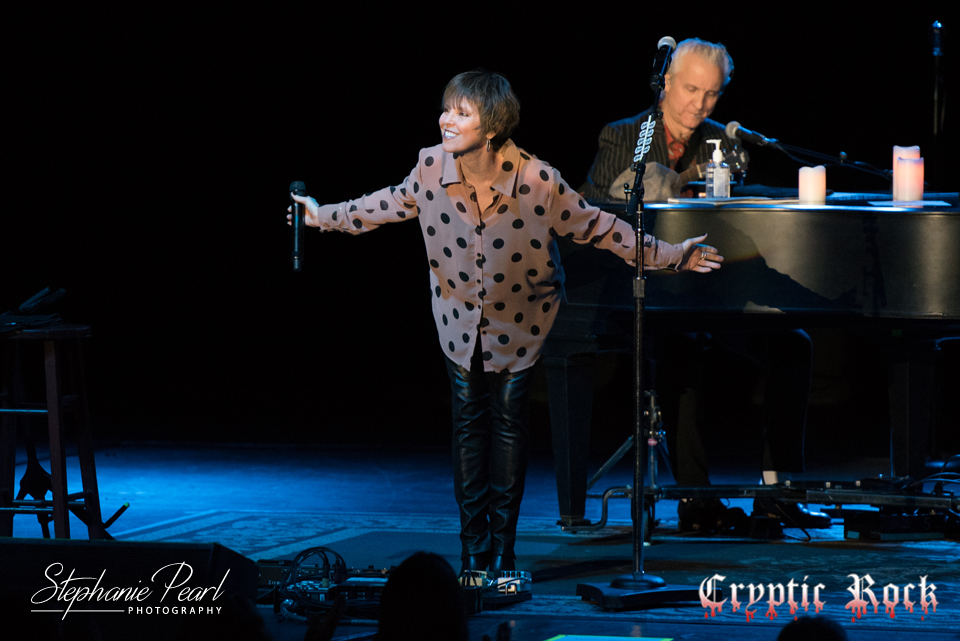 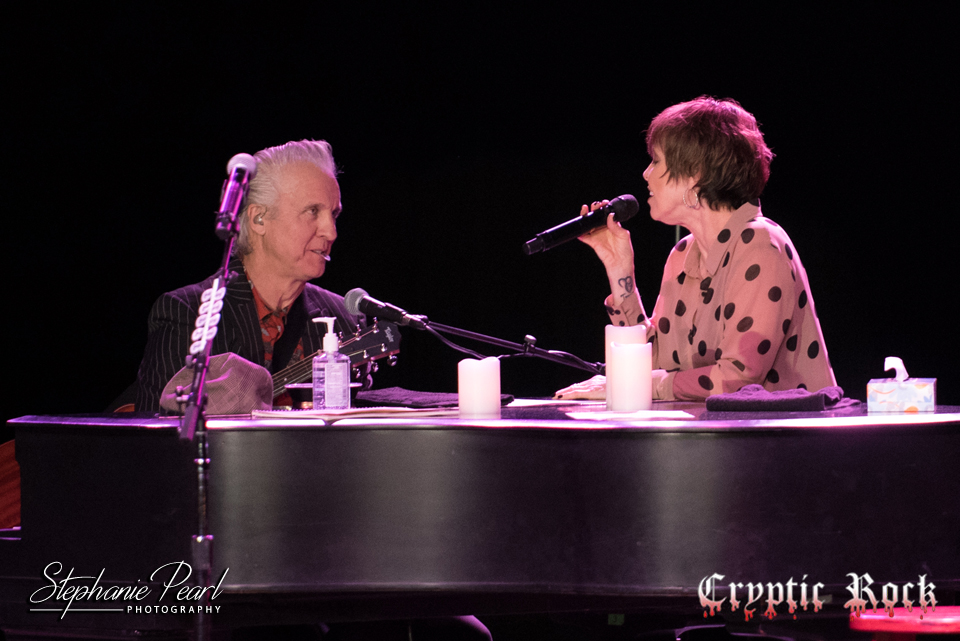 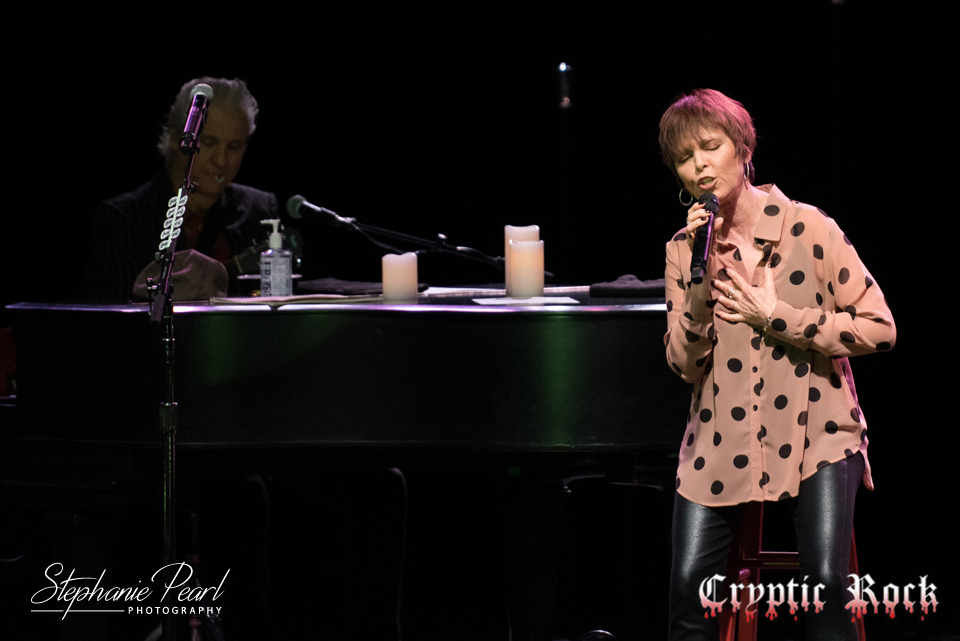 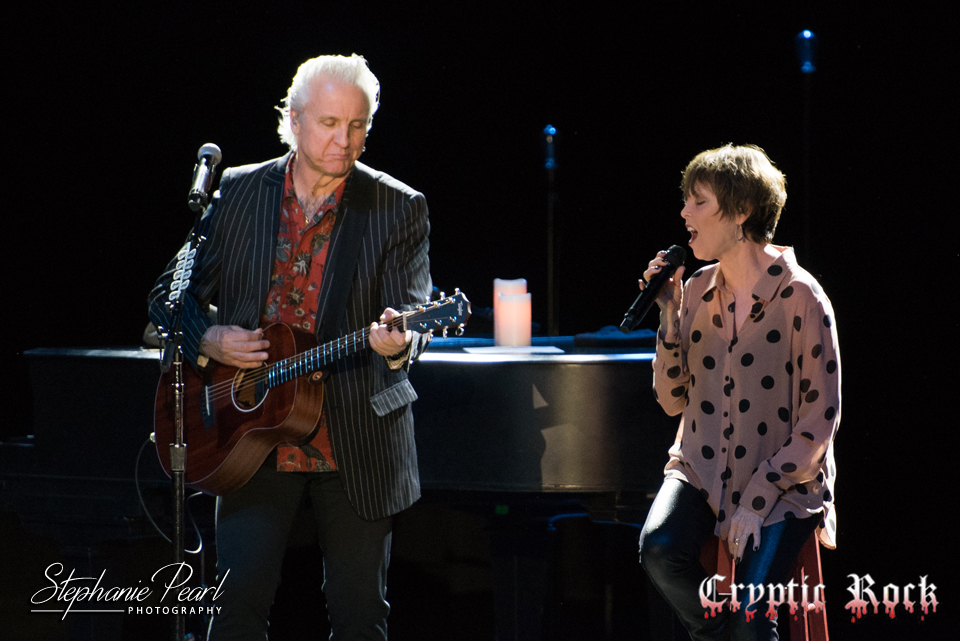 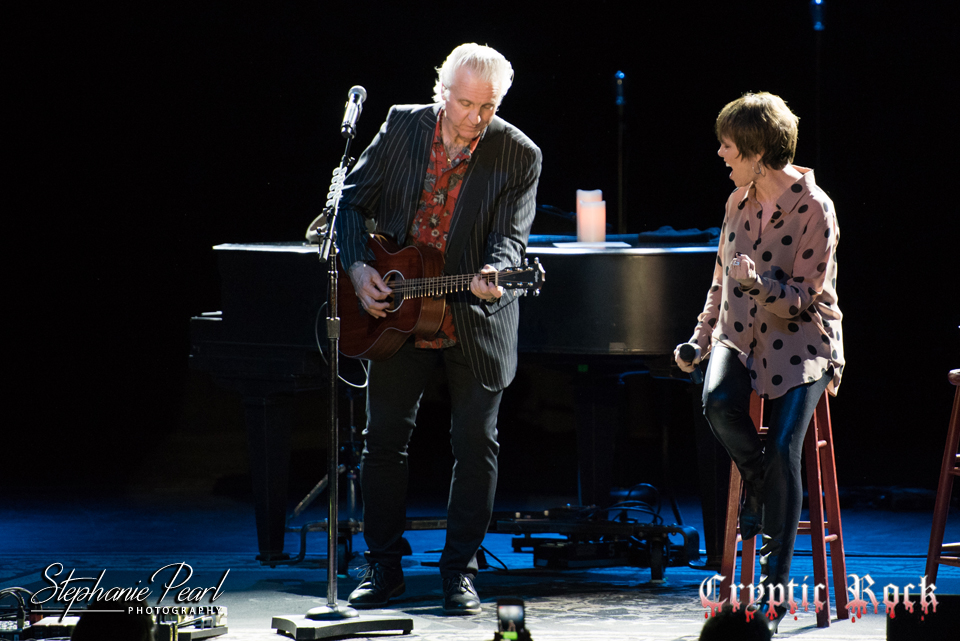 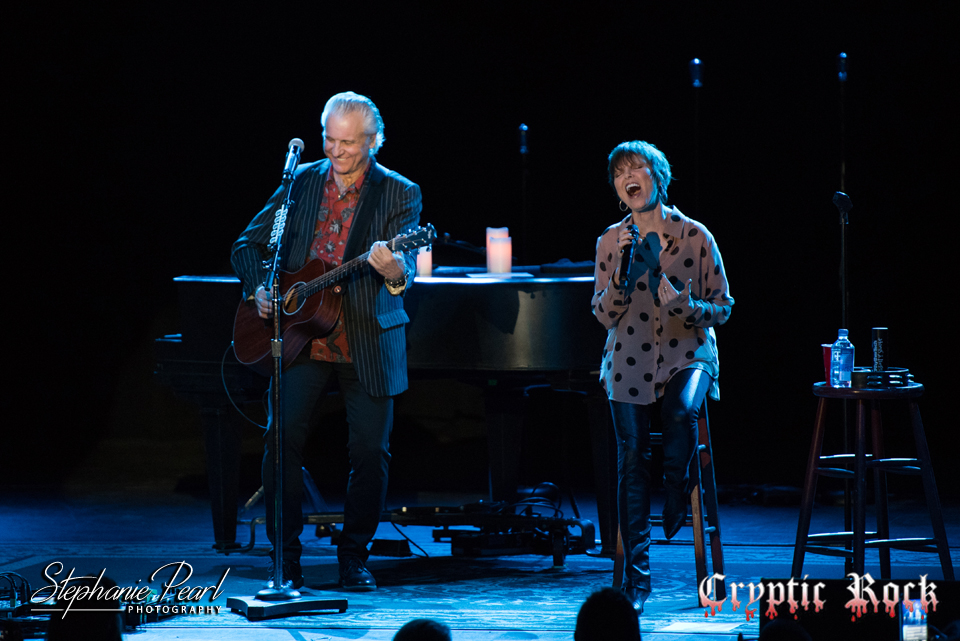 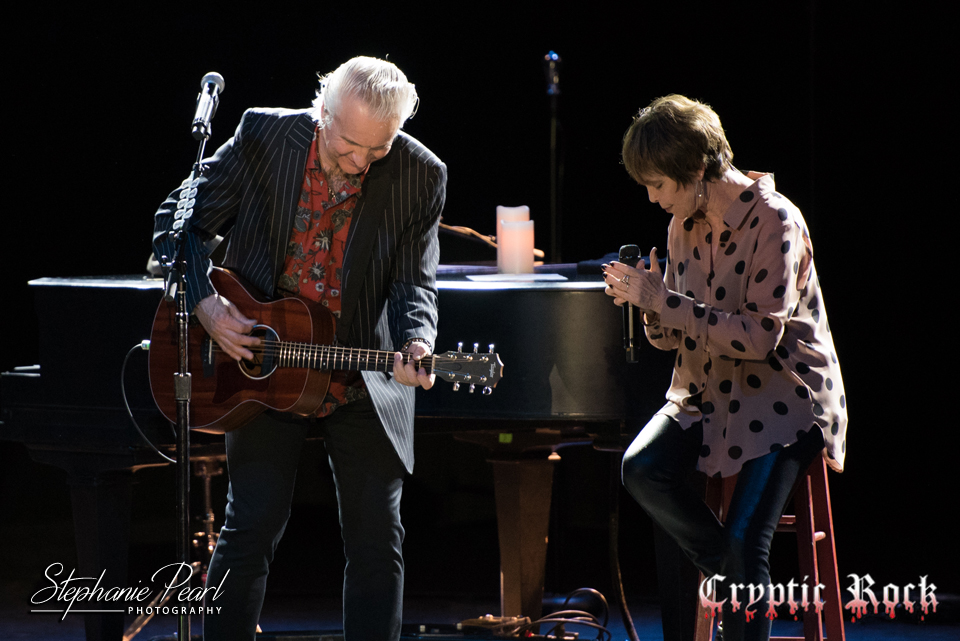 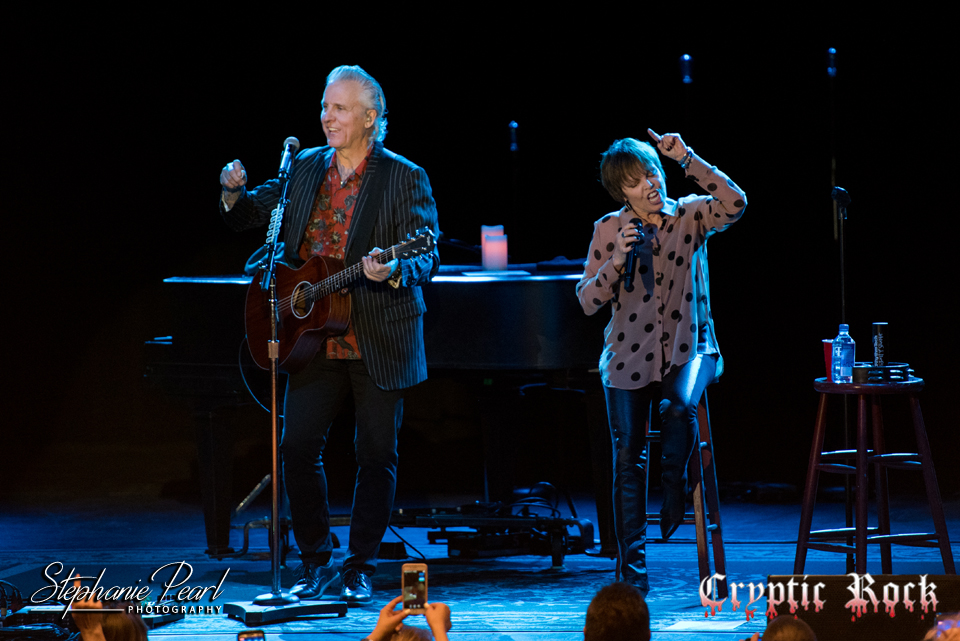