Pennywise is not a name just synonymous with a terrifying – yet awesome – extraterrestrial clown, but also the name of terrifyingly awesome Skate Punk Rock band. Inspired by Stephen King’s It to in fact take their name, Pennywise was formed back in 1988 in Hermosa Beach, California and have released an album every two years from their 1991 self-titled debut all the way to 2005’s The Fuse. To date, that accounts for eleven studio albums, two EPs, and one DVD. Though Pennywise continued to churn out content, it was not until 1995 that they had critical acclaim and commercial success due to About Time, which ranked #55 on Australia’s ARIA charts, and #96 on the Billboard 200. After that, Pennywise continued to make the charts, and by 2007, Pennywise had independently sold over three million records worldwide, which makes them one of the most successful acts of all-time in the Punk genre.

Now, Vocalist Jim Lindberg, Guitarist Fletcher Dragge, Bassist Randy Bradbury, and Drummer Byron McMackin return to the scene with their first album since 2014’s Yesterdays in the form of Nineteen Eighty Eight. Set for release May 20th via Hardline Entertainment and Theologian Records, the Nineteen Eighty Eight LP will also be on colored vinyl and a limited edition vinyl signed by the band themselves. Besides the vinyl, what makes this album exciting for long time fans and an in-depth exposure for newcomers is that the LP is composed entirely of reissues of the band’s earliest recordings. The tracks featured are from 1989 EPs A Word from the Wise and Wild Calling, as well as even ones on their 1994 Soul Arch compilation including covers of Black Flag’s “Gimmie Gimmie Gimmie,” and Ben E. King’s “Stand by Me.”

In total, there are eleven tracks on Nineteen Eighty Eight, opening with “Final Chapters” where the band maintains the original integrity of the tracks message, but with a new edge. The song opens with the signature blast of instruments and skate Punk intrigue, but there is a renewed vibe that resonates from the track, showcasing their brilliance and mastery of Punk Rock in a whole new light. Rebellion and impending apocalypse truly never goes out of style. Next is a dive into “Covers,” and though it is a song of few words, it has its meaning and emotion expressed wholly through its heavy distortion as well as sense of fast pace. The song, which is romantic in words, captures the whirlwind of relationships in their lustful phases and the rushed edge to youth portrayed in the music.

Moving on, “Depression” kicks in and is still a testament to the upbeat way of saying “stay young and full of angry vitality rather than bummed out by society” or something of that punky sort. The listener gets to relive the fire and fun that is this track to sort of a new showcasing of it. Next up is “No Way Out,” and it still has that dirty sound, but with more precision than previous renditions. The Skate Punk sound blares out and can get anyone listening as hyped as the drums pounding and wailing guitar, yet still allows the finite feel of the lyrics to sink in, doom of being caught red-handed is inevitable!

Without giving away the magic of the whole album’s rebirth, by track eight, “Stand by Me” comes on in Pennywise’s own signature touch. The track retains all of the original romance, but gets refreshed with the band’s fast-paced Punk beats. Any newlywed couple should consider head-banging to this at their wedding, champagne glasses high in the air, as Pennywise’s bass line, guitar solo, and drums bless their holy Punk matrimony. “Don’t Feel Nothing” blares on with the bitter taste of rejecting societal norms and pulsing bass. The choppy indifferent lyrics express the true meaning of the song still reverent to all non-conformists nodding along in tandem. “Gimmie Gimmie Gimmie,” the Black Flag cover, is an outburst and experience. There is all the original harshness of Black Flag’s version, and a new hardness added by the band’s second cover of the song, on this LP.

Overall, the album is a journey back into the era of true non-conformity and standing against the system. Yet, the fresh take makes it so very relevant to their new and old fans of today. Any true Punk Rockers left out there definitely want a part of the trip that is Nineteen Eighty Eight. Pennywise has done an amazing job once again, proving themselves to be one of the best in their genre still standing. CrypticRock gives this album 4.5 out of 5 stars. 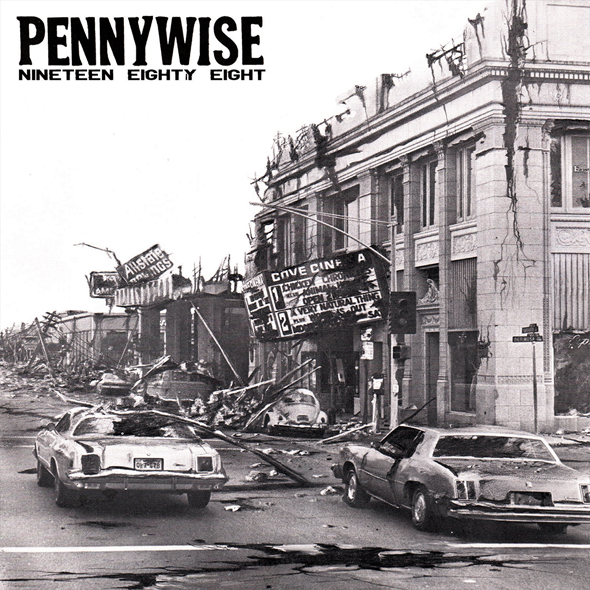