The Paramount in Huntington, New York has hosted many legendary acts in its short history. Very few acts have had the kind of meteoric rise that was enjoyed in the mid 1970’s by both Peter Frampton and Cheap Trick. These two acts also share the distinction of becoming international superstars following the release of their live albums. Together for the first time on this tour, it was originally conceived after the Rock icons shared the stage in 2014. They enjoyed the experience so much that they scheduled twenty-five more dates together that they would co-headline. Scheduled to begin in Temecula, California on June 5th and cross the country until ending up back on the West Coast for a final date on August 28th in Redmond, WA, they have been enjoying huge crowds as they worked their way across the US. On Wednesday July 29th, midway through the East Coast sweep, they stopped in at the popular Long Island venue for an evening of Rock-n-Roll mega hits. Having both graced the stage of the venue in years past on their own, this would be the first time as a pairing, and judging by the sizable crowd, fans were eager and ready.

Referred to, by the Japanese press, as the American Beatles, Cheap Trick became well known outside of the US before becoming popular at home. The band’s self-titled debut was released in 1977, followed by In Color later that year. It was not until Cheap Trick captured the hearts of Japanese audiences with the released of Heaven Tonight (1978), that things really took off for the band. Those same fans can be heard screaming with excitement on their 1979 release Cheap Trick at Budokan. This live album, recorded over two nights in Tokyo, Japan’s famous Nippon Budokan arena, propelled this Rock and Roll band from Rockford, Illinois, to international super stardom. Even though Budokan broke the band, Heaven Tonight is still widely regarded as the band’s best work, containing the band’s signature song, “Surrender.” Cheap Trick has remained quite busy in the years following Budokan, releasing thirteen records and touring with the likes of Aerosmith, Smashing Pumpkins, and Boston, as well as contributing music to blockbuster films, television shows, and video games.

Lead Singer Robin Zander strode onto the stage wearing a black Dream Police uniform, with official shoulder patches and a black hat emblazoned with a shimmering star, looking every bit the Rock star. Guitarist Rick Nielsen appeared wearing a black leather blazer, under which an image of himself, wearing his own t shirt, peered out from his actual t shirt, and matching leather ball cap. Nielsen, known for his massive collection of guitars, was sure to be showing many of them off tonight. Bassist Tom Petersson, pioneer of the twelve-string bass, showed off his brand new Gretsch, White Falcon twelve-string. Behind the drums sat Daxx Nielsen, Rick Nielsen’s son. In 2010, Daxx replaced original drummer Bun E. Carlos.

The diverse crowd came to life as the band welcomed all in attendance with “Hello There,” the opening track off of Cheap Trick at Budokan, right into “Come On, Come On,” “Lookout,” and “Big Eyes,” recreating nearly the entire first side of the album. Sticking with Budokan, the band played their hit cover, “Ain’t That a Shame” originally made famous by Fats Domino in 1955. Daxx fit the band perfectly, he made all the right choices and provided a rock-solid foundation, as though he himself was an original member of the band. Older fans sang along to the classic song they grew up with, while younger fans were amazed by just how good these veteran rockers sounded ! “Daddy Should Have Stayed in High School,” a straight up rocker, written by Nielsen, from their self-titled debut in 1977, was next, followed by two songs that showcased the two faces of their Dream Police record (1979). “The House is Rockin’,” with Nielsen playing his checkered Hamer guitar, was a Hard Rock anthem that had the crowd singing along with hands in the air, while “Voices,” a beautiful ballad that found Zander in top form, showed the side of the band that made the hits. Nielsen and Petersson backed up Zander with smooth harmonies as the crowd swayed, taking in the sweet love song. The heavy and haunting “Heaven Tonight” featured compelling vocals from Zander and slick guitar work from Nielsen as the two played back and forth before Zander stepped back from the mic to allow Nielsen a lead guitar finale that had the crowd cheering !

The band then went to a cover of “In Crowd” and delivered a great version. Zander gave up his guitar in a rare moment and grabbed his mic stand to begin “Baby Loves to Rock” a cappella from All Shook Up (1980). Nielsen joined in on an oddly shaped, square yellow guitar. Next it was Petersson’s turn to step up front and center, while Zander strapped on a white acoustic guitar. Petersson sang “Waitin’ for the Man,” a Velvet Underground cover originally sung by Lou Reed; a rare moment indeed. The strong set of great Rock tunes was just getting started as the biggest hits were yet to come. Zander impressed all in attendance with his range and smooth delivery as he stepped up, guitar in hand and began to play the band’s number one hit, “The Flame.” Hitting every note with ease, Zander found himself being backed up by nearly every audience member. This was a standout moment in the show where Zander proved that he still has it in spades. The band finished big and delivered their hits to an energized crowd. Zander and audience introduced “I Want You to Want Me” together, and the crowd danced to the up-tempo classic. The energy stayed high for “Dream Police,” and Nielsen upped the ante as he threw handfuls of picks to the crowd after reciting the spoken word part of the song, adding Huntington, NY to the delight of the crowd. Encores “Surrender,” and “Gonna Raise Hell,” closed a great night of Rock hits from a band that seems to get stronger with each show.

Born in London England, Peter Frampton was classmates with one David Bowie at Bromley Technical High School. The two would hang around during lunch breaks and play Buddy Holly tunes together. After achieving major success as a young man with the band Humble Pie, Frampton left after only two years to pursue a solo career. Frampton built a strong solo career after leaving Humble Pie, releasing four studio records before achieving international success with the release of Frampton Comes Alive in 1976. Since then, he has released eleven studio records and a second live record, Frampton Comes Alive II. He has made numerous appearances in movies and on television, most notably with the Bee Gees in Sgt. Pepper’s Lonely Hearts Club Band, and playing himself on an episode of The Simpsons. Frampton’s latest album, Hummingbird in a Box, was released in 2004.

Frampton appeared wearing a t-shirt and jeans. A somewhat understated approach for a Rock star, he was joined on stage by Dan Wojciechowski on drums; Rob Arthur on keyboard, guitar and vocals; Adam Lester on Guitar; and Stanley Sheldon on Bass. Beginning the set in front of a nostalgic and excited crowd, they opened with “Baby” from the album Something’s Happening (1974). Frampton smiled out across the packed house as he played and sang. He introduced the next song halfway and let the audience finish the Wah in “Doobie Wah,” telling the crowd, “That’s right.” “Show Me the Way” drew a huge ovation from the crowd as Frampton went to work on his talk box effect, receiving cheers after each lead break. The audience loudly sang all the choruses in unison as the icon encouraged them on. “Lines on My Face,” from Frampton’s Camel (1973), but most well known as it appeared on his first live record, brought a mellow mood to the show and was a clear favorite among the crowd. Frampton sounded terrific vocally, and had a strong class of musicians behind him. Wojciechowski effortlessly laid down the time and created great feel while Sheldon was locked in the groove.

Next was a Stevie Wonder cover. “Signed, Sealed, Delivered, I’m Yours” was full of Soul and infectious to the crowd as they danced along. “I’ll Give You Money” brought back the Rock feel as Wojciechowski kicked it off with a heavy beat, and Lester added some crushing guitar riffs with Frampton as Arthur manned the keyboards. “Baby I Love Your Way” saw a quiet fall over the crowd as they listened intently to Frampton playing an acoustic guitar as he proceeded to nail the vocals. While Arthur added tasty keys and a great solo, the crowd came to life as Frampton asked for their help with the chorus, and they obliged. Frampton went on to play an instrumental version of Soundgarden’s “Black Hole Sun,” playing the vocal melody on his guitar and, at times, using the talk box to great effect; a well done rendition as evidenced by the audiences strong reaction. A tasty Jam of “Do You Feel Like We Do” closed the set as it began. Going back to his early work on Frampton’s Camel, with Frampton introducing the band, informing everyone in attendance that he and Sheldon were together on stage during the recording of Frampton Comes Alive, then introduced his longtime friend and musical partner Stanley Sheldon, before going back to the song and using the talk box to speak to the crowd.  Frampton and his bandmates returned to the stage for one last number, “While My Guitar Gently Weeps” a cover of the classic Beatles song. Frampton and his band handled the song with reverence and delivered an emotionally powerful rendition to a grateful crowd.

The architects of two of the biggest live records of the late ’70s joined forces on this night in Huntington, New York and put on a show that clearly illustrated what it looked like back then. Cheap Trick and Peter Frampton appeared musically ageless as they played with passion and emotion as well as looked to be having the time of their lives performing for the tremendous crowd that gathered to experience them. These two acts have been responsible for a tremendous number of hits and classic Rock and Roll songs over the years. Many still played on the radio today. The live experience was quite memorable in its own right. 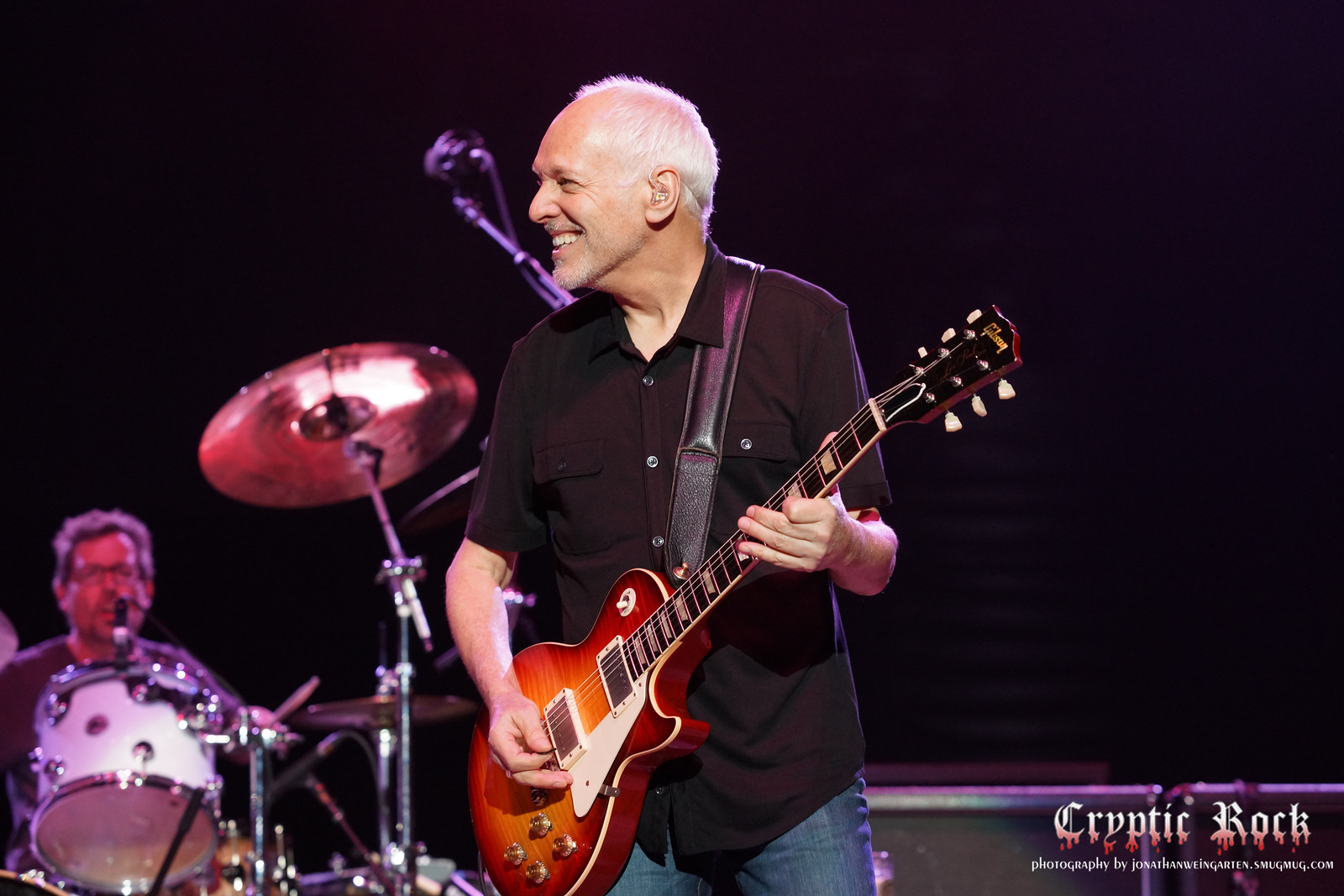 Steve Conte Premieres “Dog Days of Summer” Music Video Norah Jones – I Dream of Christmas (Album Review)
Like the in-depth, diverse coverage of Cryptic Rock? Help us in support to keep the magazine going strong for years to come with a small donation.