Born Philip David Charles Collins, Phil Collins got his big break as the drummer in the Pop Rock group Genesis in 1970. After eleven years as the drummer and six as the lead singer after vocalist Peter Gabriel left in 1975, Collins launched a solo career in 1981, officially leaving the band in 1996. He has won numerous music awards throughout his career, collecting seven Grammys, three Best British Male awards, three American Music Awards, an Academy Award, two Golden Globe Awards and a Disney Legend award in 2002 for his solo work on the Tarzan (1999) soundtrack. Born in January of 1951, Collins was given a toy drum kit for Christmas when he was five, starting him on his road to musical stardom. Although he never learned to read musical notes, Collins used his talent to hear and replay music to devise his own system for playing. Barbara Speake, founder of the Barbara Speake Stage School that Collins attended, said, “Phil was always special. At age five, he entered a Butlins talent contest singing Davy Crockett, but he stopped the orchestra halfway through to tell them they were in the wrong key.”  The drummer’s own thoughts on his talent were downplayed. He once said, “I never really came to grips with the music. I should have stuck with it. I’ve always felt that if I could hum it, I could play it. For me, that was good enough, but that attitude is bad.”

With such great experience and talent, there was no doubt that Collins would create a record that would become a household name. After the solo albums Face Value (1981) and Hello … I Must Be Going! (1982) that spawned major hits like “In The Air Tonight,” Collins was already a certified star. His third solo album, No Jacket Required, was released on January 25, 1985 and hit the top of the UK, US, Australian, Canadian, German, Norwegian, Swedish, New Zealand and Switzerland charts. No Jacket Required skyrocketed Collins to another level of fame and, at the time, respect. In years since, his music – along with many others that stand out with a sound that is utterly ’80s – has been looked at as a mere marker in time. Both Genesis’ “In Too Deep” and his own “Sussudio” have been used in the 80s-centric Thriller American Psycho (2000) as stereotypical timepiece music. But as time passes, more and more people are beginning to appreciate the creativity once seen at the core of these endeavors. No Jacket Required is a masterful mix of funky R&B and timeless melodies that influenced many other artists.

The album’s title, simply enough, comes from an incident where Collins was denied entry to a restaurant because his jacket was not considered proper attire. Many of the songs were heavily improvised – including both of the number one hits “Sussudio” and “One More Night.”  The alliterative title “Sussudio” doesn’t actually mean anything. Collins used it as a placeholder until the “real”  lyrics were written, but ultimately decided to keep it the way it was. With its rhythmic horns and the driving force of the drum machine, listeners would ultimately dance along to whatever Collins sang. “Don’t Lose My Number” is another track made up of mostly improvised lyrics. Collins himself is not even sure what it is about, but he paints the dark theme so well, it comes across as mysterious instead of an unfinished story.

One of the songs that does have a distinct meaning is “Long Long Way To Go,” a narrative on society’s tendency to turn their backs on unpleasant news. With evocative backing vocals by The Police’s Sting, Collins sings, “Switch it off or look away…” Sting contributes again, along with former Genesis band member Peter Gabriel and Culture Club’s Helen Terry, on “Take Me Home.” The track is widely thought to be about returning home, but is actually inspired by the 1962 novel and 1975 film One Flew Over The Cuckoo’s Nest. The song tells a story of someone who has been institutionalized for so long, he has no memory of his life before. The most personal song on the album is arguably “Doesn’t Anybody Stay Together Anymore?” Though it had been years since Collins’ own divorce, he began to notice separations and annulments happening to everyone around him as well.

No Jacket Required won three Grammy Awards, including Album of the Year in 1985. The record has sold over twelve-million copies in the UK, over two-million copies in the US, and over twenty-five-million worldwide, certifying it platinum six times. It was also the second best-selling album of 1985 and launched a successful No Jacket Required Tour for Collins, leading up to an unforgettable feat of playing both the London and Philadelphia Live Aid shows on July 10, 1985. The album has turned thirty this year and has resurfaced as a respectable album both for its era and beyond, proven by songs that have stood the test of time. Transcending genres in a way he never would again, Phil Collins created something innovative with this album and it is one of the must haves from his catalogue of music. 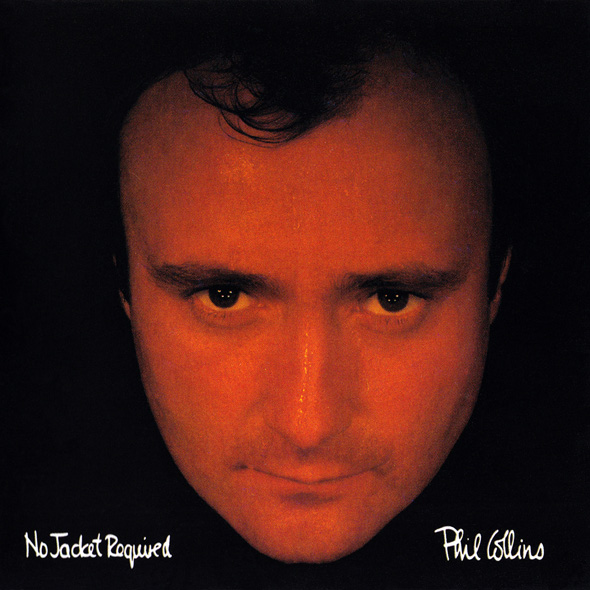