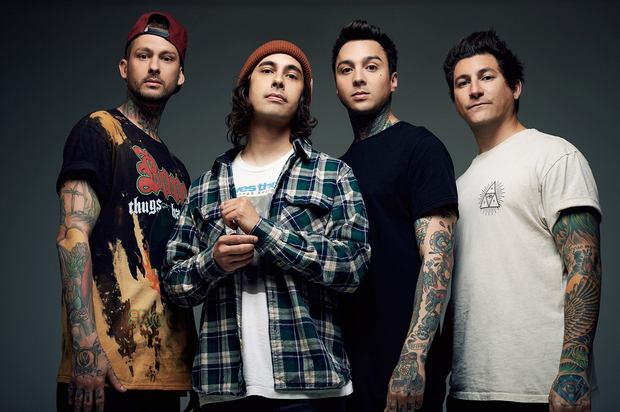 The San Diego, California band known as Pierce the Veil came together back in 2006 when founded by brothers Vic (vocals/guitar) and Mike Fuentes (drums). The two brothers started writing songs together, and eventually came up with enough material for an album. With Producer Casey Bates, the boys handled everything instrumentally by themselves, and created their 2007 debut, A Flair for the Dramatic. Shortly after being released, Lead Guitarist Tony Perry and Bassist Jaime Preciado joined the fold to develop what would become one of the biggest Post-Hardcore quartets in the industry. Following up in 2010 with Selfish Machines, the album reached # 1 on the Billboard Heatseeker Chart. Well on their way, they moved on to a new label, joining the Fearless Records family, and, in 2012, shattered all previous success teaming up with Producers Dan Korneff and Kato Khandwala to create the masterpiece, Collide with the Sky. Debuted as their best work to date, the album launched Pierce the Veil into bonafide stars. An album that began work back in 2013, release was pushed back to make sure the record was the best it could be, but as they say, good things come to those who wait.

With the long layoff and the tremendous buzz surround Pierce the Veil, many fans thought the album would lack heaviness found in previous albums, however, they are completely wrong. Misadventures starts off with one of the heaviest tracks, “Dive In.” It begins with a spiraling guitar riff, accompanied by a piano, before welcoming Vic’s incredible vocals in. His voice sounds similar to past records, but sharper now as he sustains a dynamic range throughout, occasionally dropping to raspy screams. Next comes the single “Texas Is Forever,” which really shows what Pierce the Veil are all about, lyrically and instrumentally. With a heavier sound to it, that sounds similar to their past record Collide with the Sky, the track has an energetic tempo with incredible percussion and guitars that blend very well together.

Keeping the energy flowing, another single, released several months before the album, “The Divine Zero” comes next. A powerful song, it features the catchy lyrics in the chorus that everyone will love as Vic sings, “A million waves in the ocean crash at once to make you smile.” Then comes, arguably, the best song of the record, “Floral & Fading.” On this piece, Pierce the Veil cut down the heaviness, taking a more Sublime stylistic route, but do it perfectly. A chilling song, towards the end Vic screams, “Tony!” In response, Tony Perry unleashes an astonishing guitar solo.

Bringing back the energetic tempo and heaviness are songs like “Phantom Power” and “Ludicrous Speed.” Both intense listens, the latter really pops out thanks to the lyrics such as, “I’d put a bullet in my head if I ever lost you.” Complemented by flawless instrumentation, toward the end there is a crazy guitar solo, backed up by a potent drum beats. Next comes the album’s latest single, entitled “Circles.” Easy to write off upon first listen because of it’s Pop Punk qualities, it is perhaps one of the deeps songs of the record. Proving one should never judge a book by its cover, or a song by its sound, it was inspired by the 2015 terrorist attacks in Paris, making it emotional all the way through.

Starting with an ear-catching instrumental, “Today I Saw the Whole World” features a razor-sharp guitar riff before Vic enters with his angelic vocals. A balanced track, it is not too heavy, but not too soft either. Lyrically and instrumentally, this song is a good example of all the elements that make up those before and after on Misadventures. Coming on with something different, “Gold Medal Ribbon” could be considered the album’s ballad. Just when the audience may think it is going to be a slow, melodic ballad, Pierce the Veil prove them wrong as they offer a 80’s New Wave vibe with a thick atmospheric sound. Placing strong emphasis on Vic singing, it is an extraordinary direction for the band that works well.

Upon the album’s closing, “Sambuka” is a passionate track where Vic sings pain-stricken words. A telling track, the band brings out a little old Pierce the Veil as well with heavier screams. This leads to Misadventures’ conclusion with “Song for Isabelle.” While not a ballad, it certainly has potential to be one and it is a fitting way to end a record. Uniting everything Pierce the Veil is, it is one of the boldest moments of Misadventures.

With Misadventures, Pierce the Veil capitalize on all their strongest points as a collective band. The instrumentals are fantastic, but lyrical content is out of this world. One listen is not enough to fully understand each of the eleven tracks. There is not one bad song and they all have their special place in the fabric of the album’s run-time. Full of fun, heartbreak, adventure, love, and energy, Pierce the Veil took risks and the reward is their finest material to date. CrypticRock gives this album 5 out of 5 stars. 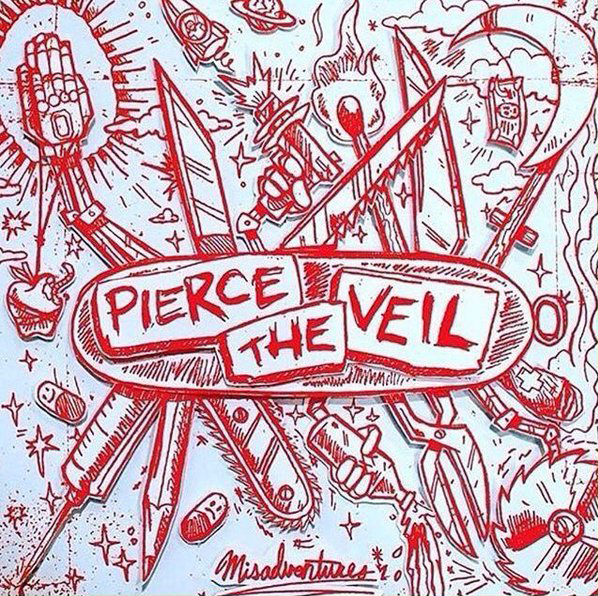