Three cheers for sweet revenge! Those with an appetite for the mercurial taste of blood and devious retribution will embrace the new table-turning Horror/Thriller flick Pig Pen, which was released to major VOD platforms and Blu-ray/DVD back on February 14, 2017 thanks to Dire Wit Films.

Initially premiering at A Night of Horror Film Festival in Australia back in 2015, Pig Pen tells the story of lost teenager Zack (Lucas Koch: Witch’s Brew 2011, Science Team 2014), a victim of a seriously messed up home-life who wanders the streets on his skateboard. Avoiding school and home – where he lives with his zonked-out single mother (Nicolette le Faye: President’s Day 2010, Call Girl of Cthulu 2014) – Zack is known to sleep on the streets, where he encounters violence at each turn of his wheels. The likely cause of his avoidance is mom’s boyfriend Wayne (Vito Trigo: Return to Nuke ‘Em High 2013, Wrath of the Blood Angel 2016), a sadistic drug-dealer who also pimps mom out to his pals for kicks.

When Zack stumbles onto an oddball concerned citizen named Fred (Michael Brecher: Witch’s Brew 2011, Call Girl of Cthulu 2014), he will attempt to make a run for it with his abused mother. What follows is a macabre episode of torture, gore, and revenge that is not for the faint of stomach. Directed by Jason M. Koch (Lamplight 2011, 7th Day 2013) and written by Koch and Mark Leake (Pleasures of the Damned 2005, 7th Day 2013), Pig Pen clocks in at 82 minutes and should be considered rated a hard R.

From moment one, Pig Pen weighs heavily with a pervading darkness, ominous eeriness, and heavily black subject matter. It is, in some instances, a similar treatise to something like, say, the 1978 Horror classic I Spit On Your Grave: the tale of an abused, downtrodden, wronged main character who, once pushed to the very brink, slashes back. Unfortunately, while there is a certain bloody triumph to other revenge-fests, there is no such happy-ending for Pig Pen.

Pig Pen is an intensely dark film that explores the violent streets of one Michigan town through the eyes of a teenager. In the role of Zack, Lucas Koch gives a stellar performance as a brooding, abused, neglected, and yet still somewhat resilient teenager. He might have a serious puss on his face, but the kid keeps on skating! Sadly, Koch’s abilities are somewhat mired down in a film with dialogue that often feels too over-rehearsed and, thus, forced.

Additionally, Director Koch utilizes flashbacks throughout the film to display Zack’s mindsight, though it is often poorly delineated as to what is past and what is present. The end result is a weak plot that suffers from a deadly slow build, only hitting bloody pay-dirt in its very last fifteen minutes.

Held together by the strong performance of its young lead actor, Pig Pen is a truly dark film, a tale with no redemption. For those that seek a morbid look at the darkest reaches of life in America, this is your film. An unflinching delivery of truly depressing material, Pig Pen is both dastardly and honest, bold and yet somehow unsatisfying. For these reasons, CrypticRock give Pig Pen 3 of 5 stars. 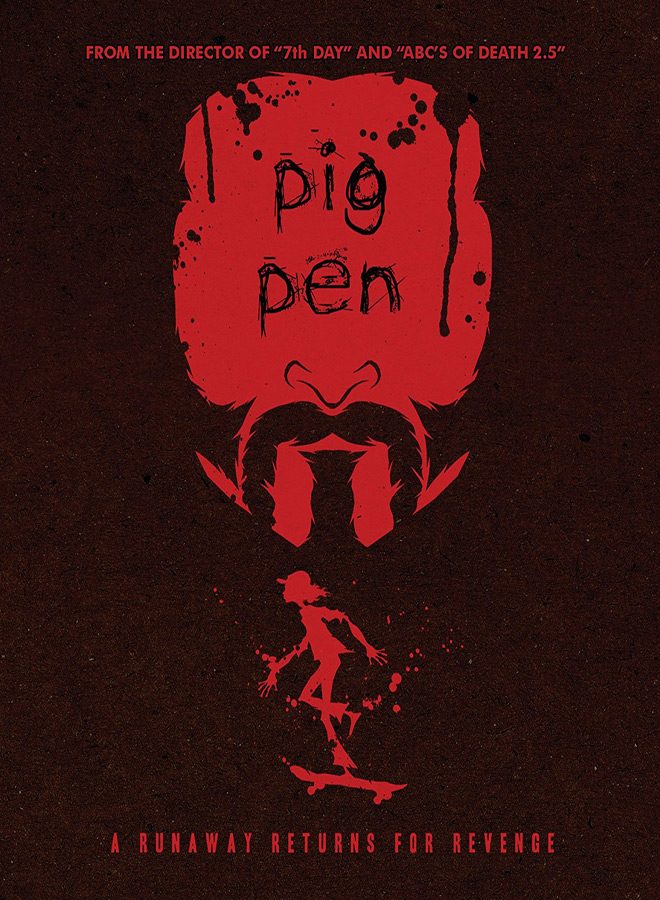