Classifying humans as an animal is not a new concept, but when Pink Floyd did this in 1977 with the release of the album Animals, it drew a lot of attention. Coming together in 1965, the four young men played together in other projects, and through childhood friendships, came together to form Pink Floyd.

Made up by Syd Barrett (lead vocal and guitar), Roger Waters (vocals and bass), Richard Wright (keyboards and vocals), and Nick Mason (drums), they played a unique style of Rhythm and Blues accompanied by psychedelic light shows, grabbing the attention of London’s underground music scene. Early on, the band began to introduce more original music written mostly by Barrett. Then, in 1967, they turned heads of the mainstream music industry, thus signing on with EMI. That same year, the band began to take note of Barrett’s apparent disconnection, but they continued on, and in August, they had released their debut studio album, The Piper At The Gates Of Dawn.

Sadly, Barrett had spiraled out so bad that the band was forced to cancel shows. As a response to such, in December of 1967, David Gilmour (guitars and vocals) was brought in as a fifth member of the band, but in April of 1968, it was announced that Barrett was leaving the band, making Pink Floyd a quartet again. Waters would start to take a more prominent writing role in the absence of Barrett, and Pink Floyd’s sound began to take another shape. With that being said, in March of 1973, they released what would become one of the most commercially successful Rock albums of all time, Dark Side Of The Moon.

Moving forward to 1975, Pink Floyd was able to afford to purchase a three-story group of church halls in Islington, England and converted the building into a recording studio that became known as Britannia Row Studios. With the studio completed in 1976, the band recorded their next album there from April to December. Finally, on January 23rd of 1977, they released their tenth studio album, the aforementioned Animals.

A highly anticipated release, not only did it bring awareness to the political environment of Britain at that time, but it also introduced listeners to a fresh new sound.  Fans would soon become even more familiar with the band’s sound with the release of the 1979 album, The Wall. Met with positive reviews, fans helped Animals reach #2 on the UK Album Charts and #3 on the US Billboard 200. With continued success through the decades, by 1995, the RIAA certified Animals 4x Platinum, and forty years later, it remains a landmark in Pink Floyd’s story.

Interestingly, the album is a total of forty-one minutes and forty-one seconds in length, but contains only five tracks. The first and last song are truly one, but it serves as the bread for the sandwich of the three songs in between, which tell the story. The first track, “Pigs On The Wing (Part One)” and the fifth track, “Pigs On The Wing (Part Two)” are both one minute and twenty-five seconds in length each. Simple, acoustic pieces, they bring lightness to the heavier content of the songs in between.

A concept album, Pink Floyd broke down society as they saw it during this era into pigs, dogs, and the proverbial sheep. “Dogs” is the second track and takes up most of side one of the album, running seventeen minutes and eight seconds. The savages of society, the dogs hunt out the weak. Creating this vibe, it starts off with a soothing acoustic guitar strumming while the lyrics bring a serious tone as the music builds. A third of the way into the song, the tone changes as the sound of dogs barking in the distance keep the listener aware of the surroundings. Mid song, it takes another turn musically, as the dogs are heard barking and howling further in the distance. Throughout, Gilmour plays intricate lead guitars and Wright weaves in and out with mesmerizing synthesizer work. Although, even dogs have a weakness and can be “dragged down by the stone.”

The following song starts with the sound of grunting pigs. The keyboards carry the listener into the punching guitar licks that help tell the story of the “Pigs (Three Different Ones).” Lyrically portraying the powerful and wealthy in this society, the smart cowbell by Mason at just the right moments accents the song, along with the thumping bass lines of Waters helping Gilmour’s lead guitar to pop out. Mid song, pigs can be heard grunting again and that grunting morphs into Gilmour’s lead guitar playing. Wright takes back the song with a eerie synthesizer line to carry out the last verse. At the very end of it all, birds are heard chirping, giving the listener the false sense of security.

The final track of the conceptual story, “Sheep” picks up where “Pigs (Three Different Ones)” left off with chirping birds before Wright kicks in playing precise keyboard notes. Waters comes in strong with his vocals to tell the listener about how sometimes even the sheep have had enough of being cattled and how they rose up and fought the dogs. The music heard here is a journey all its own, incorporating musical pieces of the other songs. But sheep being sheep, even though they won this time, found safety back at home in the flock. When it is all said and done, the song ends peacefully with the sound of birds chirping and the faint sound of the sheep’s “baas.”

A work of art right down to the album artwork, it depicts a flying pig over an industrial building, the Battersea Power Station. This concept of the flying pig was brought to life at arena shows during the In The Flesh Tour, the tour in support for Animals, and continued to be part of Pink Floyd’s live shows for many years thereafter. One of many bright moments in their career, Pink Floyd’s success continued to excel in the years since the release of Animals. They have released a total of fifteen studio albums throughout their timeline and they have sold well over 250 million albums worldwide as their fan base continues to grow decade after decade.

Members of the Rock And Roll Hall Of Fame since 1996 and the UK Music Hall Of Fame since 2005, Pink Floyd’s legacy remains intact. While no longer together as a band, Waters and Gilmour tour separately and play Pink Floyd’s songs to fans at sold out arenas throughout the world. Forty years later, Animals is still a very relevant album while its psychedelic nuances give it a classic feel. This said, the music and lyrical content keep it pertinent and make it a must have in any Progressive Rock fan’s collection. 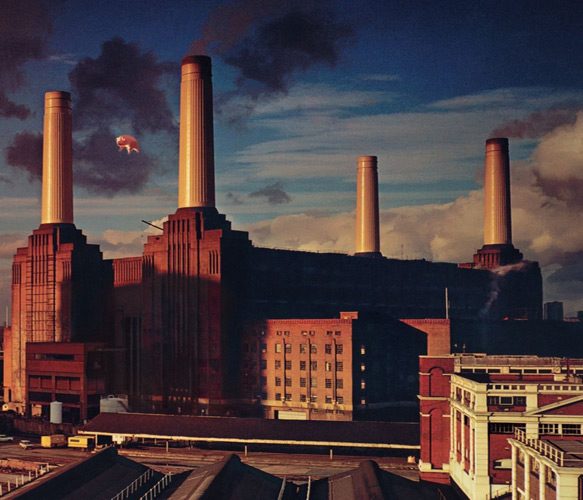