If you were to read the names of the cast and production staff of Planes, Trains and Automobiles it would be hard to come away with the idea that the end product was going to be anything less than a comedy classic. Written, Produced, and Directed by John Hughes, working at his prime; starring Steve Martin (¡Three Amigos! 1986, Father of the Bride 1991) at the top of his ability, as well as John Candy (Volunteers 1985, Spaceballs 1987), playing up the best of his persona, the argument could be made that it almost would not matter what the film was actually about. After all, surely if you throw together artists of this level, they are almost bound to come out with something great! 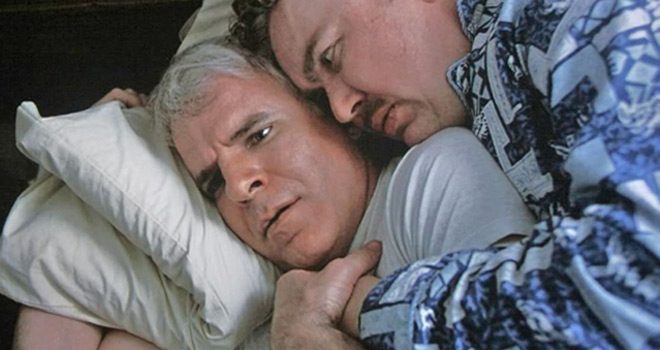 This would be an example of an argument that is both entirely correct and entirely limited; and Planes, Trains and Automobiles is not a Comedy classic merely because of the mammoth amount of talent that was invested into its production, it is even better than that. The resulting film is a Comedy classic that manages to both encapsulate and excel beyond that mammoth amount of invested talent.

Opening in theaters across America on Wednesday November 25th in 1987, on Thanksgiving Eve, Planes, Trains, and Automobiles is more than just an adored Comedy, it is the classic example of a film that lives up to the idea of being “more than just the sum of its parts.” The actor’s performances, the confident direction, and the stellar writing are not excellent separate of each other – they are flawless in a manner that builds off of each other to form a better, more comprehensive whole.

Moreover, Planes Trains, and Automobiles works precisely because it never gets overly ambitious with its intentions. No, it is a deceptively simple film in three key areas: structure, character and theme. In each of these areas, the film can be broadly summed up in just one sentence while also expounded upon for hours if one so wishes even 30 years after its initial release. 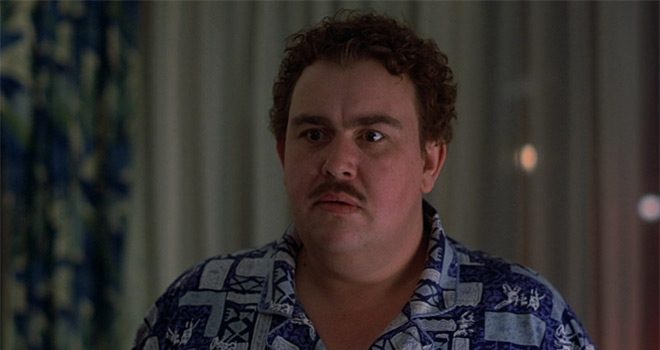 Both Neal Page (Martin)  and Del Griffith (Candy) could be interpreted as simple characters – Neal is rigid and anxious businessman, while Del is free-wheeling and optimistic shower curtain-ring salesman. This gives the audience a simple conflict to latch onto, an idea that is at the essence of all good cinema: two contrasting characters rub each other the wrong way.

All that in mind, this simplicity is something of a Trojan horse – Planes, Trains and Automobiles works because it lures the audience in with the easy and the broad, then suckerpunches them with emotional complexity. The major arcs of the story may be easily digestible – “two men with nothing in common on a road trip” – but the major emotional beats are anything but.

Coming a few years after mega Teen Comedy hits such as 1984’s Sixteen Candles, 1985’s The Breakfast Club, as well as 1986’s Pretty in Pink to name a few, Planes Trains, and Automobiles was a huge left turn for John Hughes. While there was little critical or commercial doubt that he was capable, audiences had never really gotten to see him working outside of that established sub-genre before.

Hughes’ direction is as simple as the story, but it is yet another element of the production that is thoughtful in how subtle it is in its execution. That said, Hughes never steps on the script by trying to oversell it, instead taking more of a reserved approach and letting the actors do a lot of that work for him.

John Candy, in particular, was regarded as the highlight of the film, and to this day it remains perhaps his most treasured role. Never really starring in many films that displayed the actor/comedian’s amazing talents to the fullest, the fit is so perfect with Planes, Trains, and Automobiles that it is impossible to believe that he was just adopting the character; Candy lives the character so well that it is highly likely he played an active role in Del’s development. There are other actors who could play a Del-type, but there is nobody who could bring this particular character to life quite like Candy does. Everything from his voice to his huge physical presence is a match made in heaven, that same huge presence that eventually reveals a wounded and frail core towards the end of the film. 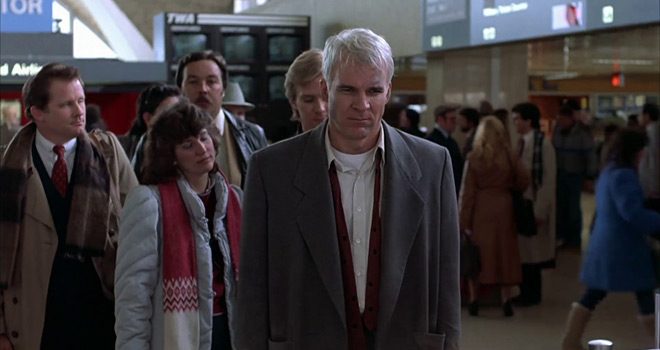 On the other side of the equation Steve Martin tries on a variously different role than audiences had seen him in the past such as 1979’s The Jerk and 1983’s The Man with Two Brains. Here Martin plays the straight man and does it so well. Easily agitated and absolutely hilarious when he gets pissed off, his Neal Page is not just spot on, it is perfect.

The funny thing is the whole story was really about a businessman who spent too much time away from his family in Chicago because he is a busy advertising executive. Just looking to find a way to get home for Thanksgiving, everything that could go wrong does for Neal from the moment he steps out of the office to race a younger businessman to a cab in a busy New York City. By the way, that taxi racer was in fact Kevin Bacon making a quick cameo for a good laugh.

From there Neal meets Del and things go from bad to worse as flights are delayed, hotels are booked solid, his wallet is cleaned in the dead of night at the Braidwood Inn, he has to cause an airplane runway because a rental car company gave him keys to a car that was not there, a ticked of cab picks him up by his testicles, and he is nearly killed in between two tractor trailers going the wrong way on a highway! Sounds terrible, right? Actually, it is pretty damn hilarious and the un-dynamic duo of Neal and Del make it such.

So what is the point of it all? Well, while sidesplitting fun abounds throughout the film, the real underlying message is much more heartwarming than anything. By some sort of divine intervention, Neal and Del are brought together from two completely different universes, but who is saving who? That is debatable because, in the end, they both teach each other a few lessons about life. 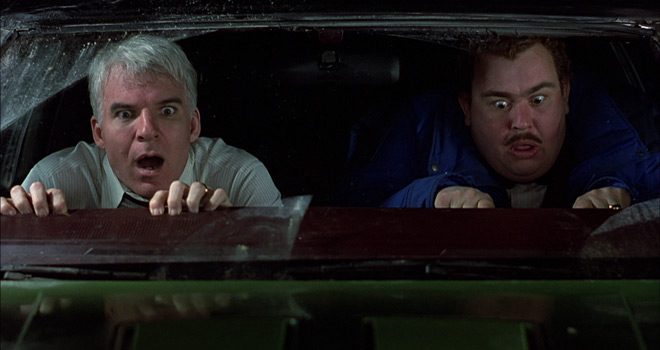 A film which had its share of success at the box office bringing in nearly 50 million dollars in sales after a twelve week run into 1988, it also stayed in the top ten for seven straight weeks. One could argue the film’s folklore only built after that, as more and more people discovered it through the years thanks to home video rental. In fact, there are probably more than a few American families which make it a tradition to watch Planes, Trains, and Automobiles every single Thanksgiving Eve. Right down to the tingling, emotional ending with Blue Room’s rendition of “Everytime You Go Away” in the background, it is a viewing experience no one gets tired of.

And at its core, Planes, Trains, and Automobiles is about the bubbling humanity behind every bit of broad Comedy. It tugs at the heartstrings and teaches us all a lesson about what really matters most and that is why it has helped redefine Thanksgiving to many movie-loving Americans. Clear in both concept and execution, it is Hughes’ focus on these aspects that permeates every frame, and, more importantly, it is why the film is so rightly remembered as the classic it is today. 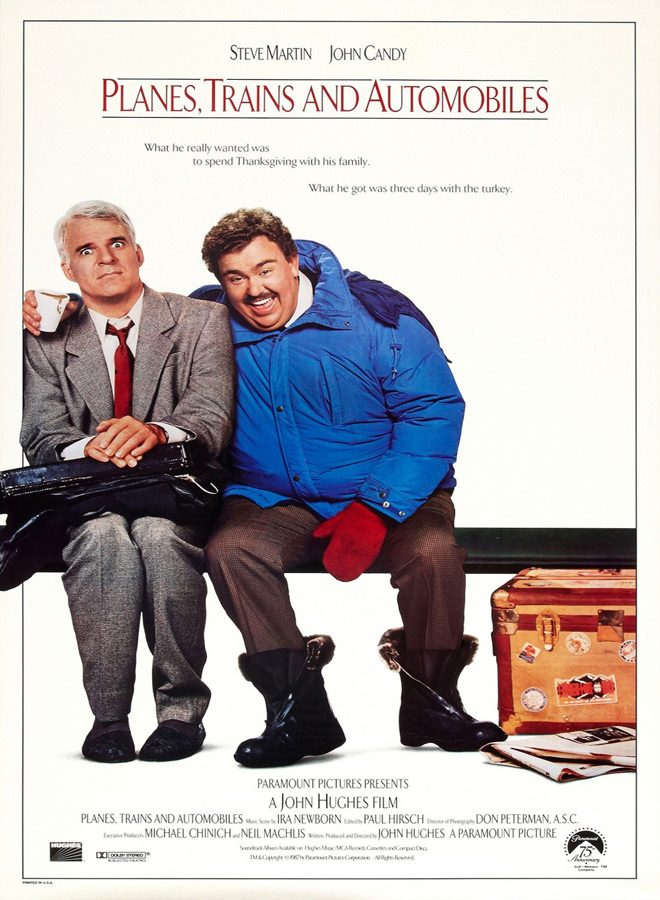