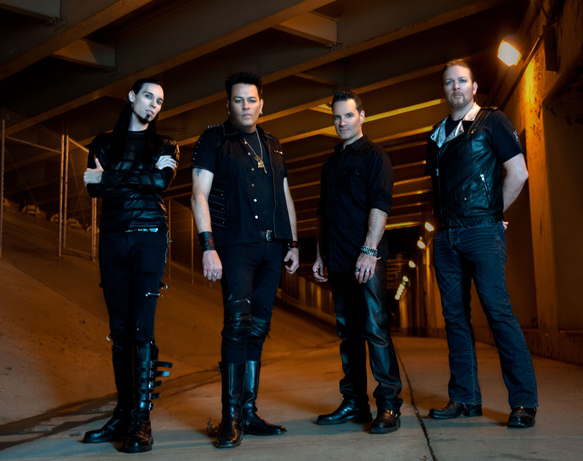 Electronic Hard Rock band Pound of Flesh came out of Chicago, IL in the late ’90s with Darrell James, on vocals and drum programming, Al Stehman on guitar and backing vocals, Michael X Christian on bass and backing vocals, as well Steven McIntosh on keyboards and backing vocals.  That year, the band dropped their debut album, Red & Black, which struck a chord with a plethora of radio stations, making several “Best of” charts for a few of those stations. In the midst of touring in support of Red & Black, James met Al Jourgensen of Ministry, who was so impressed with his talents that he invited him as keyboardist on their ’03-’04 Fornicatour and Evil Doer tours. This turned into gigs on Ministry’s ’05 Rantology compilation album and the ’06 Rio Grande Blood album. Also, in ’06, James did some work with the Revolting Cocks on their Cocked and Loaded album. Still finding time to devote to his own project, James and McIntosh continued to work on new material in 2008, which turned into 2014’s Pills album. Now in 2016, the band re-release the material in the form of the EP Refills as of January 7th via WuLi Records/INgrooves Music Group.

Produced by McIntosh, Refills is seven tracks that assault the listener. Featuring remixes that revive the classic songs with a different vibe, it all starts with “Army of Me.”  This opening track pulls out the Industrial sound with a Pop-like drumbeat in the elongated intro as opposed to the original’s Hard Rock, Industrial mashup. The Hard Rock joins with the original’s tight riff as the vocals come in. The track balloon’s to just under eight minutes from the original’s four and change. Next, “One Time Offer” has a HIM/ Marilyn Manson-esque vibe from the onset as the original. The piece plays heavily on the Electronica, going from four minutes to almost seven. Moving on to single “Believe,” this remix is a more synthesized version of the original. Given that, it is the piece that sounds the most identical to the original, even at almost seven and a half minutes from the original’s three.

“Everybody” has a Dance vibe like the previous tracks of the EP; however, unlike the original’s ominous beginning, this song mashes Dance and Metal while retaining the hardness the original elicited through its almost seven and a half minute playtime. Sans the original’s motorcycle revving up, the remix of “Live Fast” comes in on a synthesized riff followed by a guitar riff.  This track retains the urgency the piece calls for as it runs a little over the seven and a half minute mark.  The original sounds cleaner compared to the remix. The biggest contrast in the original to remix is with “Ready to Go,” the original being a straight Metal piece, and the remix being a predominantly Electronica piece. The guitars almost seem like a throw-in to carry the original’s melody. At just under six minutes, “Ready to Go” could stand on its own with just the synths and vocals. Closing Refills is the radio edit of “Believe,” and the difference between the remix that came before is the intro has a shorter, more melodic beginning with a more radio-friendly playtime of 4:13.

Remix EPs are nice little refreshers to rekindle fanbase interest as well as widen said fanbase of other genres. Given that, there has to be enough of a difference in the sound or a variation on the lyrics to listeners to warrant a reworking of the original works, or the EP comes off as just a rehash or cash grab. In this case, the band has said a full-length album is due for release later this year. This being said, Refills reminds while whetting appetites for better things hopefully to come from Pound of Flesh.  CrypticRock gives Refills a 4 out of 5 stars. 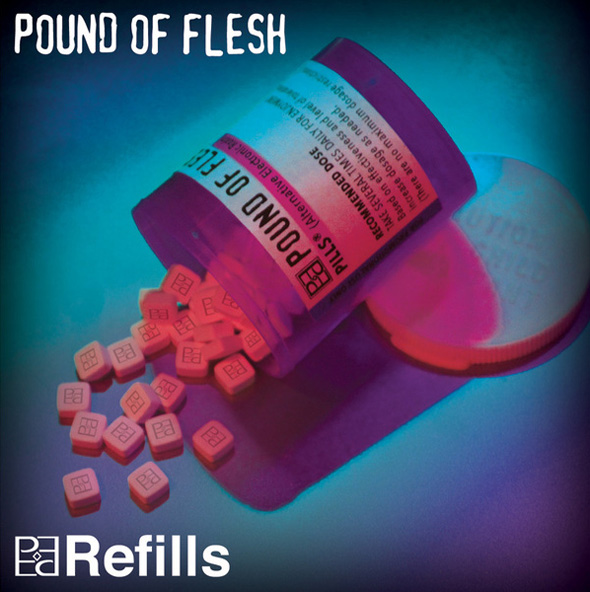