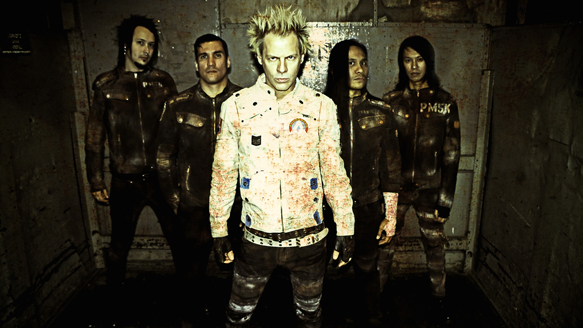 Over two decades into the game, Spider One has explored many styles and sounds with his LA-based rock band Powerman 5000.  Developing an underground following early on, the band received their biggest commercial success upon the release of Tonight the Stars Revolt! (1999).  Forging a unique sound and style of science-fiction themed nu-metal, Powerman 5000 was at the top of the rock world with such hits as “When Worlds Collide” and “Nobody’s Real”.  Riding high, the band’s follow-up in 2001 was to be Anyone for Doomsday?, but the album was abruptly scrapped at the last minute and has never seen the light of day.  Since then Spider One has kept the brand name of Powerman 5000 strong through various line-up changes.  Refusing to conform to a notion of what the band should sound like, he dabbled in different approaches with Transform in 2003 and the punk influenced Destroy What You Enjoy in 2006.

Fast forward to 2014 and it has been three long years since Powerman 5000’s last studio album when they released the cover album Copies Clones & Replicants.  Before that, their last original studio album was all the way back in 2009 with Somewhere on the Other Side of Nowhere.  While die-hard fans have remained by Spider One’s side through the years, many yearn to see the band re-capture the conceptual style of the sci-fiction theme to a deeper level again.  Now with a new line-up consisting of Spider One, Dj Rattan (Rattan) – drums and percussion, X51 (Gustavo Aued) – bass, Zer0 (Richard Jazmin) lead guitars, and sci55ors (Nick Quijano) – rhythm guitars; Powerman 5000 unleash a bunch of raw rocking, fictionary, b-movie like industrial-rock diamonds on their new album Builders of the Future.  Featuring production by former guitarist Evan Rodaniche, the album is also the first released on T-Boy Records/UMe, a co-venture with Universal Music Enterprises founded by veteran rock manager Andy Gould.

The opening song “Invade, Destroy, Repeat” blares the noise-rock factor and rolls over the listener like a train in forceful manner showing no compromises.  The track is reminiscent of newer Combichrist with more Nu-Metal guitar riffs.  Following the intense opening are “We Want it All”, lead single “How to be a Human”, and “You’re Gonna Love It, If You Like It Or Not”.  The tracks have catchy guitar riffs, nice solos, and great vocal hooks by Spider One.  These tracks follow the recipe of the golden age of Powerman 5000; staccato guitars, electronic verses, a Rock’n’Dustrial chorus with lots of creepy sounds and easy to sing and dance along after listening the first time.  Vintage Powerman 5000 at its best!

The electronica influence is felt strongly throughout the album and come on heavy with the title track which drills in the head of the listener with sick psychedelic loops and rap-vocal phrases. Proving the band is not one-dimensional; pairing with their electronica science-fiction sound is the acoustic and emotional ballad “I Want To Kill You”. Inspired by calm vocals of Spider One, the entire band compliments this wonderful track with psychedelic instrumental parts in the middle.  Other stand out tracks like “Modern World”, “Live It up Before You’re Dead” and closing track “Evil World” should satisfy all Powerman 5000 fans with more fun catchy electronic tingling tracks.

Builders of the Future has no major surprises but stays true to form of one of the best industrial rock bands out there.  There are plenty of exciting tunes on the album that could make this one of the best Powerman 5000 albums of the last fifteen years.  Hopefully it will not take another five years until their next album.  CrypticRock gives Builders of the Future 4.5 out of 5 stars. 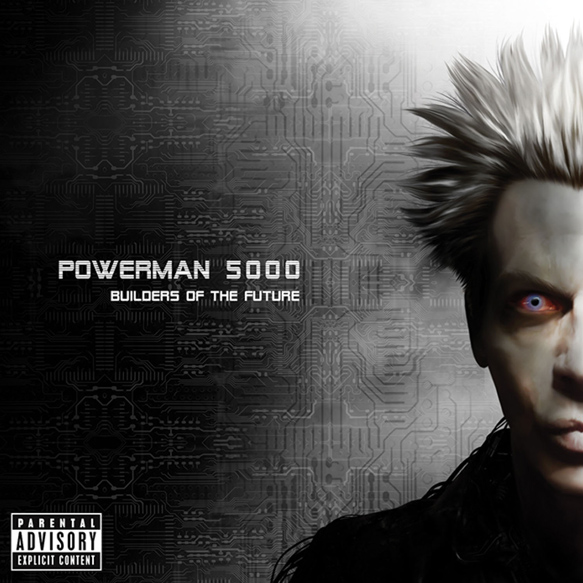 Frank Iero and the Future Violents – Heaven Is A Place, This Is A Place (EP Review) You Me At Six – Suckapunch (Album Review)
Like the in-depth, diverse coverage of Cryptic Rock? Help us in support to keep the magazine going strong for years to come with a small donation.