It was a Mid-Season finale to die for, and one of the characters of Pretty Little Liars has officially died. It was not a typical episode in which Marlene King promised more answers and she did not deliver, in this Mid-season finale, she delivered, and even tricked the fans by saying something about this episode before and giving them more than they asked for. If it is, in fact true, then this last of episodes of 2016, entitled The DArkest Knight, will have told the audience who Mary Drake’s long-lost child is. One of the Liars finds out about a course-altering future and is unsure about what to do about it. For the remaining liars, life is not going any easier as one by one gets bad news about their current life events. 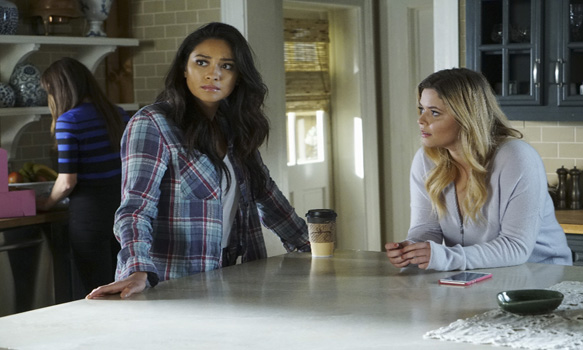 Hanna abducts Noel in the hopes of making him talk and confess himself as being A.D., but her situation gets sidetracked as she discovers that Noel is really not Mary Drake’s son and that automatically gives him an alibi. Hanna seeks Mona’s help, and she is more than happy to help her out, but when things start to go awry, Hanna tells the rest of the girls about what she did to Noel. They all go looking for Noel only to discover that he has gotten loose and has the camera Hanna used to record him being questioned by her. They immediately receive a text message saying that if they want the camera, they will have to go to the given address and exchange it for the USB flash drive. Before the intense tragedy at the house, it is important to mention what happened before they all got that text and where each and every one of them stands.

When Paige visits Emily, Alison is sick to her stomach claiming Paige is only taking advantage of the situation to get close to Emily; Paige thinks vice-versa. As Emily is getting the bed ready, Alison confesses she is pregnant with Archer’s baby and that she does not know what to do. Emily comforts her and the two share a kiss together and possibly more that night. Speaking of spending the night together, Caleb and Hanna finally let their emotions loose and the two make long-awaited love as the sun sets; the love has always been there and not even them could deny it. Spencer seems to be getting closer to Marco, but she still feels the need to see Toby one last time before he leaves. 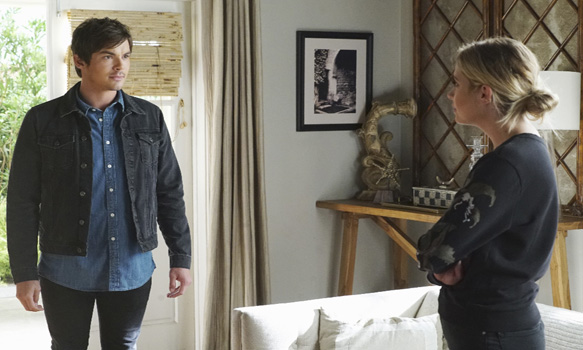 As Toby is packing to leave town and start a new life with Yvonne, Spencer gets there to say goodbye. She asks Toby for one last kiss, as if she knew that something bad was going to happen, and it did. Before leaving town and ending the episode, Toby is seen with Yvonne, crashed into a tree with no signs of life whatsoever. One death was promised in the mid-season finale, but could Marlene King lie about that too? Poor Aria does not have it good either; as she is preparing food for herself and Ezra, she sees on TV that he has actually reunited with Nicole, the fiancé that was taken in Colombia. Aria is devastated by this news and decides to pursue Noel with the rest of the other girls.

Sydney returns as Jenna’s doppelganger to distract Caleb and Mona so that the liars can all go alone in that sacrificing crusade. At the house, Emily, Spencer, Aria, Hanna, and Alison are all met by Jenna, who is holding a gun, and Noel, who finds a knight’s axe sharp enough to cut anyone in two. Hanna and Emily are each fighting off Noel and he makes a mistake that gets his head rolling, literally. As the girls all run away from Jenna, Spencer is shot, but before she could pass out, Mary tells her she is her mother. A.D. takes Jenna and the two take off in a van. Everyone’s destiny has been sealed and no one is safe. The last ten episodes of the series will kick off in April 2017, and the fans are already feeling desperate how will this story end? CrypticRock gives The DArkest Knight 5 out of 5 stars. 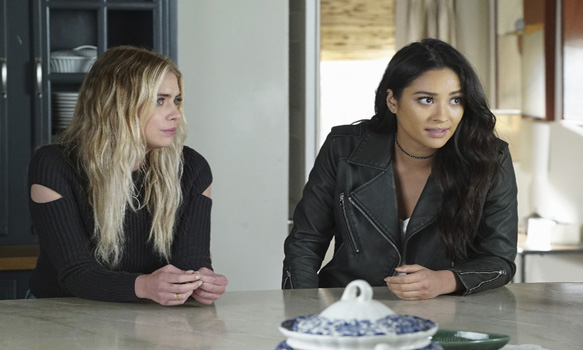 Anneke van Giersbergen – The Darkest Skies Are The Brightest (Album Review) Creepshow (Season 2 Review)
Like the in-depth, diverse coverage of Cryptic Rock? Help us in support to keep the magazine going strong for years to come with a small donation.