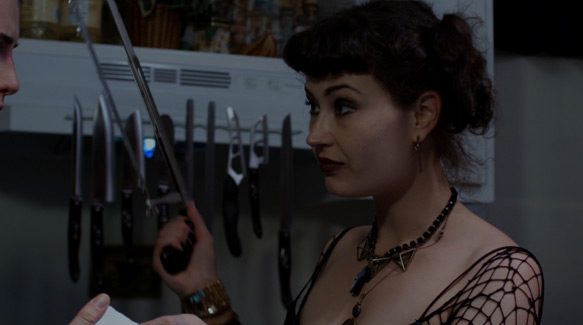 That having been said, for a while, it is not quite clear what Psychos is going for tonally. This is certainly an experience most ably characterized by a lack of subtlety, and it takes a while for it to settle in that the film is not necessarily trying to sell you an exaggerated reality for effect. This is a film that presents what it is going for as clearly as it can manage, both in terms of the story and how it tells it – and within this context, that is not particularly positive.

The most important element of this is, naturally, the characters, who unfortunately come across more as caricatures than they do people to whom the audience could relate to. The performances do not particularly help with this, many of them infused with a sing-song naivete that does very little to imply there is much going on beneath the surface of their actions. To put it simply; every actor here is playing a type, and very few of them seem comfortable with whatever “type” they are playing.

There is an argument to be made that all of the characters being so uncomfortably broad in this manner actually works to the film’s benefit in one way; every male in the beginning of the story is portrayed as almost cartoonishly malevolent, which does actually help establish the idea of a world in which these women have been victimized by men and see all men as overtly menacing figures. This would be effective if the female characters did not also often behave like cartoons; they are painted with so broad of a brush that it is difficult to empathize with them, making it difficult for the audience to become invested in their struggle. 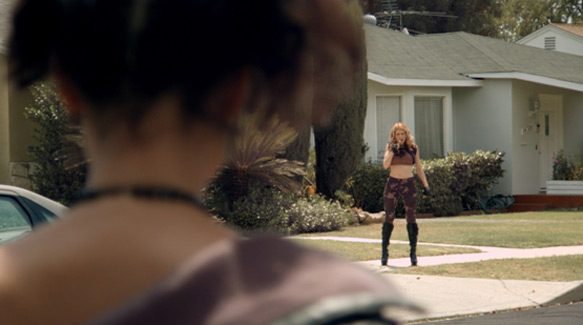 As mentioned, Psychos struggles with its sledgehammer approach to story, and this certainly applies to how it tells said story too, which becomes very obvious very quickly. The “Horror movie” indicators are loud and proud, but do little to suggest that it was their intention to call attention to themselves – slow and creepy music during the ramp up turns to a screeching wail for jump scares, characters slowly approach the expected source of horror, etc. Unfortunately, these are tropes that just do not frighten anymore – horror is the consequence of fear after all, and predictability does not scare anybody.

The cinematography often seems like it had the least thought put into it; the film is lit with the same flat lighting throughout, and when it does try to leverage light for dramatic effect it does so by merely switching up the color scheme to single colors at a time. The effort has been made in this moment, but the result that said effort leads to is beyond clunky.

All that having been said, Psychos does have merits that legitimately make it interesting. The bulk of the action taking place in a single location is always interesting, and does thematically tie in with the idea of said location taking on a looming, omnipresent quality to the people who have previously suffered trauma inside of it. Additionally, there is one particular death scene in the film that is well choreographed and photographed, all of it coming together to effectively emphasize its brutality, and this is thankfully helped by very good make-up work on the corpse afterwards. 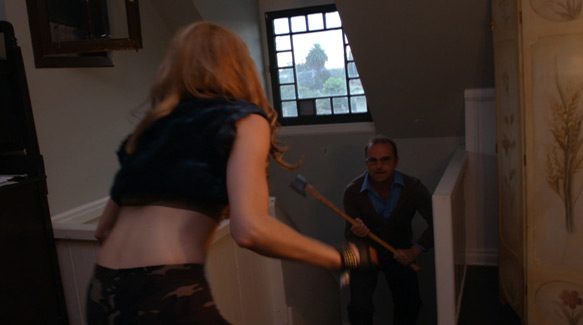 Most importantly though, Psychos makes a compelling twist about halfway through its running time, giving it a sense of energy and identity that it was simply lacking before this. All its problems are still there, but at least past this point the plot begins to become unique enough to justify watching despite these limitations. After all, anything can be made up for if the core of a story surprises and interests a viewer; even non-effective storytelling. To be clear, this is to the writer-director’s benefit: there is a good nugget of a film in here, it is just stylistically expressed in ways that detract rather than emphasize its strengths.

Ultimately, Psychos does not surpass the expectations of its production; a bright-eyed student’s first feature rather than a seasoned pro’s addition to Horror filmmaking. It has its glimmers of inspiration, but drops the ball too frequently and powerfully to earn a recommendation. For that, CrypticRock gives Psychos 2 out 5 stars. 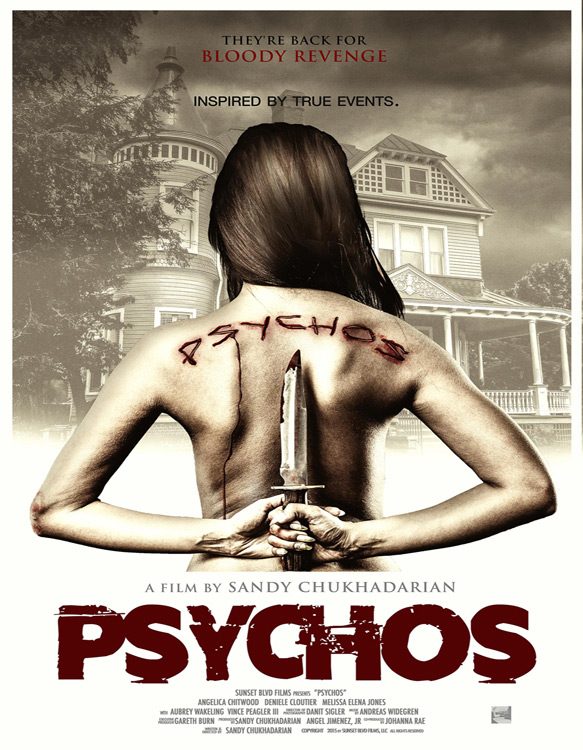 The Reckoning (Movie Review) Sator (Movie Review)
Like the in-depth, diverse coverage of Cryptic Rock? Help us in support to keep the magazine going strong for years to come with a small donation.