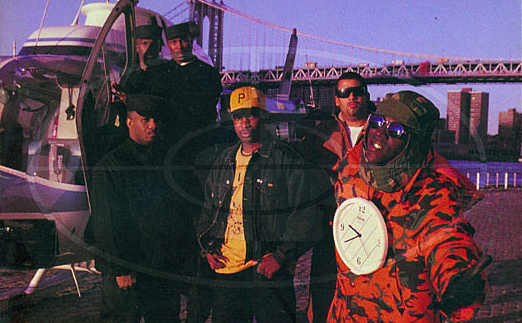 In 1987, Public Enemy took the hip-hop world by storm and heralded a new era in rap music with the release of their first album, Yo! Bum Rush the Show.  Everything about Public Enemy was heavy – from their lyrical content to their pounding style of sound.  Hard-hitting and unapologetic, Public Enemy was the first major group to use rap music as their platform for political, cultural, and social commentary.  Chuck D, the group’s frontman and head lyricist, created a hip-hop militia consisting of long-time collaborator and comic relief Flava-Flav, Professor Griff as Minister of Information, DJ Terminator X, and The Bomb Squad on production duties.  Together, they would ensure that their message would open eyes and ears.  While other hip-hop acts had shown occasional social awareness up to that point, PE was the Revolution on wax.

In quick succession, Public Enemy released three more albums, all to critical acclaim.  It Takes a Nation of Millions to Hold Us Back (1988) and Fear of a Black Planet (1990), the group’s second and third albums, respectively, are considered two of the most important albums in music history, regardless of genre.  “Fight the Power,” the theme song to Spike Lee’s powerful and controversial Do the Right Thing (1989), is inarguably rap’s greatest song ever.  Other hip-hop acts followed suit and used their mics and decks to educate the masses about the injustices around them.  Public Enemy’s influence was without question at that point.

Muse Sick-N-Hour Mess Age, their fifth album, was released three years after Apocolypse 91… The Enemy Strikes Black, the longest duration between albums up to that point in Public Enemy’s history.  In the world of hip-hop, three years may as well be a generation.  Many critics wondered about Public Enemy’s relevancy.  In the time that the group had been on hiatus, the environment of social consciousness hoping to change the world had been replaced by me-first gangstas looking out for themselves and their crews.  Public Enemy was not going to conform, nor were they happy about the musical landscape they now found themselves in.

Chuck D and crew lambasted gangstas, drug dealers, and drug addicts, accusing them of profiting off the backs of fellow blacks, and, in turn, playing right into the hands of the white-run system designed to keep blacks and other minorities “in their place.”  Chuck was still old-school enough not to name names, but other than that, he does not hold back on his criticism of the culture of criminal glamorizing that was around him.  The opening moments of the album opener “Whole Lotta Love Goin’ on in the Middle of Hell” are comprised of various samples denouncing the crime epidemic affecting black communities.  Chuck’s in-your-face lyrics continue the message, controversial at the time, holding the community, in part, responsible for black-on-black crime.  “So Whatcha Gone Do Now?” and “What Side You On?” are more direct attacks at gangsta rappers and their empty, easy gratification output.   “Live and Undrugged Pt. 1 & 2” blasted both drug dealers and the users who keep them in business for being complicit in the conspiracy that brought drugs in the ghetto to keep the underprivileged under control. 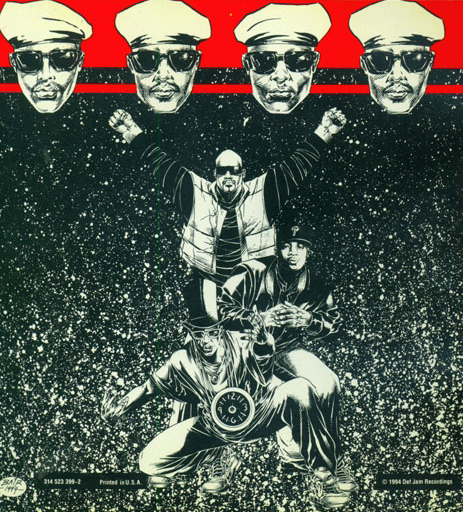 While Muse Sick-N-Hour Mess Age initially sold better than most of it is earlier releases, it quickly fell off the charts, lost amongst all the gangsta rap and R&B dominating urban radio at that time.  Critics, most notably Rolling Stone, blasted the group for not crafting a stronger, louder argument against gangsta rap and its purveyors.  They also pointed out the hypocrisy of Public Enemy’s anti-drug stance, considering the well-publicized run-ins with the law and battles with substance abuse that Flava-Flav was experiencing at the time.  Not all reviews were negative, however.  Considering the relatively long delay between studio albums, Muse Sick-N-Hour Mess Age was seen as a refreshing reminder of what hip-hop used to be, and could one day be again.

Twenty years on, and Muse Sick-N-Hour Mess Age, still holds up not only among Public Enemy’s powerful legacy, but as snapshot of an important age in musical history.  While criticism regarding the album’s “punch” may have some validity in comparison to their harder-hitting earlier releases, Public Enemy proves with Muse Sick-N-Hour Mess Age that the pen (and tongue) is mightier than the sword (or gat).  Yes, Chuck D is guilty of the unforgivable crime of demanding accountability, but the album is also full of love and hope for black culture and society.  A listen to the fun and funky “What Kind of Power We Got?” will showcase that vibe best.  Considering the current debates and efforts regarding renewable energy and climate concerns, “Bedlam 13:13” may be more relevant now than it was two decades ago.

While Public Enemy’s first four albums are considered the strongest part of their canon, Muse Sick-N-Hour Mess Age is an underrated and often overlooked significant part of an important band’s body of work.  Hard rock and metal fans who were introduced to the power of Public Enemy through Anthrax will find plenty of heavy sounds and content to keep them happy on this album.  Hip-hop fans who mainly focus on the earlier albums should revisit this one, Public Enemy’s last on Def Jam Records.  Chuck’s lyrics and delivery are as powerful as ever, Flav brings that comic edge perfectly, and the Bomb Squad deliver the beats that punctuate the message that Public Enemy brings without remorse.  On this album’s twentieth anniversary in 2014, the impact is just as strong. 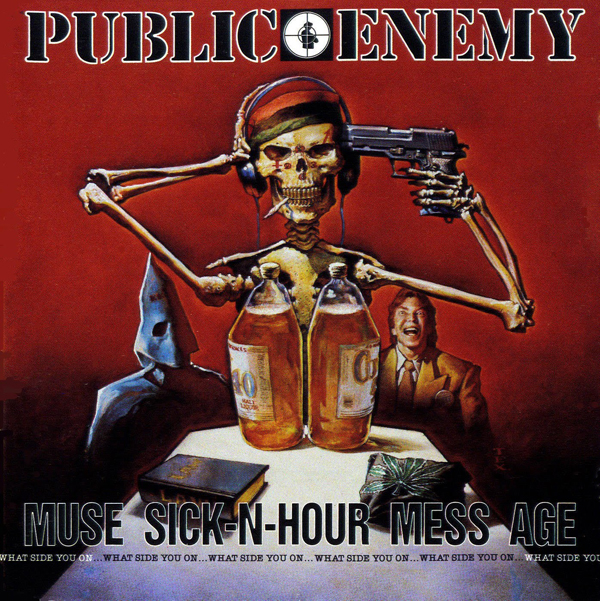