Coming on Long Island, New York, Public Enemy are one of the most respected names in Hip Hop. Unique to others on the scene during Hip Hop’s boom in the ’80s, Public Enemy delivered socially conscious songs with a hard political edge, spitting verses loaded with angst, distrust, and rage. Anthems for a generation, their introduction to the mainstream all began when they released their debut album, Yo! Bum Rush the Show, back on February 10th of 1987 via Def Jam Recordings.

Produced by Rick Rubin, who worked on LL Cool J’s Radio in 1985 and the Beastie Boys’ Licensed to Ill in 1986, Public Enemy’s debut completed the holy trinity of B-boy Hip Hop which ushered in the golden age of the genre, relegating the previous generation of rappers to a place in the history books. Not to be disrespected, but unlike LL Cool J and the Beastie Boys who focused on braggadocio, teenage humor, and tomfoolery for lyrical inspiration, Public Enemy had a message, music with a message, and it still is potent 30 years later.

Led by Chuck D. and Flava Flav, Public Enemy formed when the two met at Long Island’s Adelphi University in the early ’80s. Building their name, by the time Yo! Bum Rush the Show was dropped, there was more public controversy regarding race relations. Bernhard Goetz was on trial for shooting four black youths on a New York subway, and a racially motivated murder in Brooklyn was heating up in the press and on the streets of New York.

Bringing these emotions to life were Public Enemy, melding the contrasting styles of the two key members. There was Chuck D’s omniscient, intelligent, booming voice from the heavens, while Flava Flav plays the role of humorous counterpunching sidekick. Together, the duo created a sound and style that was completely fresh in the Rap game. Rounding out their unique style was Hank Shocklee, who provided the drum beats, and DJ Terminator X, who provided ample amounts of scratches and carefully selected samples, grabbing horns, guitars, keys, bass lines, and sound effects. The wailing, siren-like buzz heard throughout most of the tracks would become a signature of Public Enemy. The sound was both ominous and melodic, and created a sense of dread, all the while moving the track along with an unbridled sense of urgency.

“Yo Chuck, they out to get us, man…..” begins the album on “You’re Gonna Get Yours,” setting the tone for the underdog, a disaffected theme that would run from start to finish. Snapping snare drums coupled with Funk-laden samples are the foundation for Chuck D to lay down rhyme after rhyme, telling the tale of a man battling the streets and police oppression. The confident, bravado delivery would be something the group relied on throughout their career. Following the opener is the guitar driven “Sophisticated Bitch” before the powerful “Bring the Noise.” A song which they would repeat on 1991’s Apocalypse 91…….The Enemy Strikes Back, a re-recording of “Bring the Noise” with Anthrax, it became a trailblazer for Rap Rock.

Then there is “Miuzi Weighs a Ton” bringing a simple drumbeat and turntable scratching to the fore as Chuck D bellows out menacing lyrics like, “If they made me a king I would be a tyrant/If you want to get me go ahead and try it…………It was war they wanted and war they got/But they wilted in the heat when Miuzi got hot.” A precursor to Gangsta Rap, Public Enemy delivered a smooth groove with Outlaw Country sensibilities. “Timebomb” continues the dangerous, threatening theme over funky drums, guitar, and with Pop like precision. Bleeding right into the next cut, “Too Much Poss,” here Flava Flav takes the lead, and does not disappoint. Stepping away from his usual role of humorous interjections and rabble rousing, Flava Flav delivers a well-crafted rhyme over energetic, simplistic sounds.

Later on, “Rightstarter (Message To a Black Man) is rife with horn samples and finds Public Enemy in what will become familiar and controversial territory as Chuck D calls out the contemporary African-American community to take pride in their history and failing to overcome obstacles. Sounding like a Baptist preacher, with a wonderful message, he delivers stinging lyrics such as, “Another brother with the same woes you face / But you shot with the same hands, you fall from grace / Every brother should be every brother’s keeper / But you shot with your left while your right was on your beeper.” This is before “Public Enemy Number 1” follows, opening with odd spacey effects and a rambling diatribe from Flava Flav. The effects continue throughout the track in a drone, creating a perilous soundscape over which Chuck D provides a melodic rap in classic B-boy style.

The there is “M.P.E.” which finds Chuck D and Flava Flav exchanging verses in a rapid-fire fashion over, once again, a sparse, hard-hitting arrangement. The chorus simply states, “Public, Public, Public Enemy” as the group puts its stamp on the track. The title track follows, and oozes ’80s Hip Hop. With a stuttering refrain, a simple drumbeat with a Rock-n-Roll edge, heavy on the hi-hat, and minimal effects, the foundation is something Rap artists would adopt frequently over the next fifteen years during Hip Hop’s golden era. While the track is incredibly simple, it was nonetheless pioneering.

“Raise the Roof” features intermittent, deep bass groove interjections coming in over effects, scratches, rat-a-tat snare drums, and cowbell as Chuck D delivers his most melodic verses on the album. The chorus features sounds and samples that would become staples of the scene for years to come. “Megablast” again finds Chuck D and Flava Flav taking the lead, and even singing in harmony. Clocking in at under three minutes, it is a quick romp over a simple two note scratch and simple drums. For parts of the song, Chuck D and Flava Flav, instead of harmonizing, sing different lyrics at the same time, creating a disorienting sound, making the listener almost uncomfortable, but the steady beat keeps it together.

Finally, album closer “Terminator X Speaks With His Hand” is essentially two plus minutes of drums, effects, and rare groove guitars with Flava Flav twice interjecting with rah-rah, free spirited musings. A peculiar ending for sure, but a good teaser of what was to come on their follow up, 1988’s critically acclaimed It Takes a Nation of Millions to Hold Us Back.

Recently enshrined in the Rock and Roll Hall of Fame back in 2013, Public Enemy’s importance to Hip Hop cannot be overstated. Debuting at the early stages of what would be a fifteen to twenty year run where Hip Hop was just as, and often more popular than any other genre, Public Enemy were leaders. This was only because of their powerful style, eschewing the typical sounds of the time, but, more importantly, their heady lyrical content.

Playing to their name, Public Enemy never shied away from controversy, and often created it with songs focusing on controversial topics from race relations, police brutality, failed governments, and the failure of the African-American community to rise above these issues. Some less open-minded people have found their inclusion in the Rock and Roll Hall of Fame to be odd, but Rock-n-Roll music is about attitude, shock value, and rebellion, and no group in Hip Hop’s storied history had more of a Rock-n-Roll attitude than Public Enemy. This said, it all began thirty years ago with Yo! Bum Rush the Show helping Public Enemy become #1. 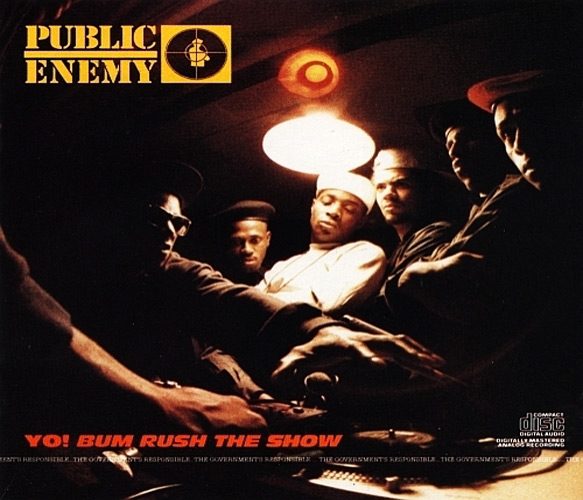