PVRIS – All We Know of Heaven, All We Need of Hell (Album Review)

Inspiration can come in many forms. For Massachusetts Electrorock trio PVRIS (pronounced Paris), their sophomore album, All We Know of Heaven, All We Need of Hell, was highly influenced by another Massachusetts native, Emily Dickinson.

The album’s title comes directly from one of her poems, which includes the lines, “Parting is all we know of heaven/And all we need of hell.” The poem is about loss and the hopelessness that comes with it. It carries a similar darkness that is evident on the follow up to the band’s explosive debut album, 2014’s White Noise. Taking a turn to a decidedly less Rock edge and darker Electropop sound with All We Know of Heaven, All We Need of Hell, released on August 25, 2017 via BMG, the album feels like rain in a storm, showering emotion after lightning and thunder have opened the gates.

Vocalist Lynn Gunn’s voice is a powerful force that cannot be ignored. It crackles, haunts, and breathes with emotion as Gunn channels her inner demons, heartbreak, and sense of isolation. It is clear All We Know of Heaven, All We Need of Hell takes a more introspective approach, which might make it seem like the energy that vibrated through White Noise is muted here, but it is a brave choice to show vulnerability. Opening track and lead single, “Heaven” soars with a catchy chorus and Gunn’s captivating vocals. The pain is easily felt as Gunn begins with the question, “Do you ever wonder/Who took the light from our life?/The life from our eyes?” As reverbed vocals supply a dreamy atmosphere, Gunn cuts in with the furious roar of “You took my heaven away,” which can be felt to the core.

“Half” continues to combine moments of calm with turbulence, an ebb and flow that works well to convey Gunn’s admission of inner turmoil, feeling both overwhelmed and numb, struggling to find a balance between the two. Alex Babinski’s guitar work sets the mood, but it is Gunn’s layered vocals and tormented wails of hopelessness that strike a chord. The song is beautiful, its story tragic.

The vibe of “Anyone Else” is much lighter and upbeat in its instrumentation. The beat makes it a danceable track, while lyrically the song continues to show Gunn’s struggle. It can be interpreted a couple different ways. In one sense it seems to begin with reassurance to a lover that though they may be parted, there will not ever be anyone else that will hold the other’s heart the same way. Yet, by the song’s end, it feels more like a declaration that one has broken free and does not belong to anyone but herself. The song ends with the wistful sound of harp strings and it is truly breathtaking.

Beginning with infectious “oh, woah’s,” “What’s Wrong” continues to invade the senses. It simultaneously overtakes the body with dance beats that make it easy to fall into a dance trance, but it would be a mistake to think this song is anything but a proclamation of pain. The juxtaposition of theme and tone make it a stand out track.

The theme of doomed and toxic relationships is apparent throughout All We Know of Heaven, All We Need of Hell. On “Walk Alone,” Gunn once again speaks of the misery, solitude and lasting effects a failed relationship can produce when she admits, “Darling, I always knew that we were doomed/I stay cold, feel the weight of the world/Now I always, always walk alone without you.” The song has an ambient quality with a hint of dubstep and the use of a harp that work to present an almost stream of consciousness effect teetering on the bridge of reality and subconscious.

“Same Soul” is another track that appears to take a more upbeat avenue instrumentally, but the mid-tempo track holds true to the theme presented throughout the album. The chorus breathes fire with Gunn’s fury as she screams, “I’m just somebody that you used to know.” Anguish and despair permeate through All We Know of Heaven, All We Need of Hell.” “Winter” is a haunting track with a morbidity to it that is visceral as Gunn sings, “Can you burn a fire in my flesh?/Cause your love’s so cold I can see my breath.”

The chaos enveloping Gunn’s mind is perfectly reflected in “No Mercy.” The chorus explodes with Gunn letting loose her frenetic energy, rocking out furiously as the frantic percussion complements the rage in her vocals. The penultimate track “Separate” ventures back into a haunting soundscape with a bit of mystique and a degree of intensity that is ever present on the album. Finally, “Nola” gives the slightest inkling of hope as Gunn sings, “Don’t know where I went wrong/But I keep singing.” 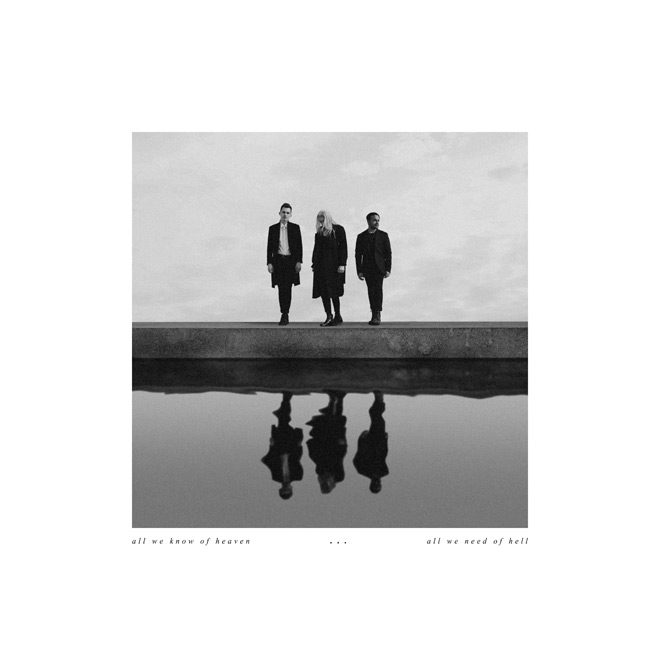