One of modern film’s most adored fictional heros, Indiana Jones smashed into theaters like a boulder into an archaeologist. Originally debuting the film series on June 12th, at the start of the 1981 summer season, Raiders of the Lost Ark went up against other box office hits such as Clash of the Titans and Mel Brook’s History of the World, Part I. Featuring plenty of star power behind the scenes, Steven Spielberg acts as director, Frank Marshall as producer, as they worked from a screenplay written by Lawrence Kasdan, based on a story from George Lucas and Philip Kaufman. Spawning a Pop culture phenomena, 35 years after Raiders of the Lost Ark, Indiana Jones’ epic crusade has whipped its way into cinema history. 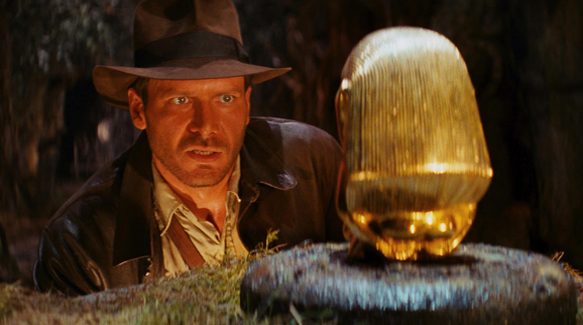 Following tomb raider and adventurer Dr. Henry Walton Jones, Jr. (Harrison Ford: Star Wars series, Blade Runner 1982), better known as Indiana Jones, the film is set in 1936, in the Peruvian jungle. Decked out in his trademark bullwhip and fedora, Jones retrieves a golden fertility statue from deep inside a temple. It is booby-trapped, and after grabbing the idol, it starts to self-destruct. Rushing to escape the elaborate traps, it includes the scene etched into Pop culture history where he outruns an enormous boulder. When he escapes, he finds arch-nemesis, Rene Belloq (Paul Freeman: The Long Good Friday 1980, Double Team 1997), waiting with a Hovito tribe to take the idol.

Jones makes a daring escape and returns to his job as a professor at fictional Marshall college, but soon two Army intelligence agents inform him that Nazis are searching for his former mentor, Abner Ravenwood, which leads Jones to believe the Nazis are searching for the Biblical Ark of the Covenant. With the Ark, the Nazi army could become invincible.

Traveling to Nepal, he finds that his old teacher has died and that Abner Ravenwood’s daughter and Jones’ former love-interest, Marion (Karen Allen: Animal House 1978, Starman 1984), has the relic. They are confronted in Marion’s bar by Gestapo interrogator Arnold Toht (Ronald Lacey: Firefox 1982, Red Sonja 1985) and they escape after a fight that leaves the bar consumed in flames. Flying to Cairo, Egypt, Jones meets up with his old friend, Excavator Sallah (John Rhys-Davies: The Lord of the Rings series), who is digging for the Nazis and agrees to help Jones get the Ark away from them.

Marion is later captured by the Nazis and Jones has another encounter with Belloq, after which he, with the aid of Sallah, infiltrate the Nazi camp. They find both the real resting place of the Ark and where Marion is being held, but are captured trying to raise the Ark out of the snake-filled Well of Souls. What follows are more chases in trucks, boats, and submarines. Eventually Jones, Marion, and the Nazi coterie end up on the German island base Geheimhaven, where Belloq hopes to test the power of the Ark before presenting it to Hitler. God’s awesome wrath makes faces literally melt and heads literally explode, but only for those who can keep their eyes open.

History shows Ford shot to fame because of his roles in Lucas’ Star Wars trilogy as Han Solo as well as as Jones in Raiders of the Lost Ark. Interestingly enough, much like his role as Han Solo, he was not the first choice for the role of Jones. Lucas was worried that Ford would be considered his ‘Bobby,’ referring to Martin Scorsese’s use of Robert De Niro in many of his movies. Many actors were considered including Jeff Bridges, Tom Selleck, Bill Murray, Steve Martin, Chevy Chase, Nick Nolte, and Jack Nicholson. Ford landed the role just three weeks before filming started. For those wondering what it might be like to have Bill Murray as Indiana Jones, please see Groundhog Day, but imagine it with whips and a Nazi Punxsutawney Phil. 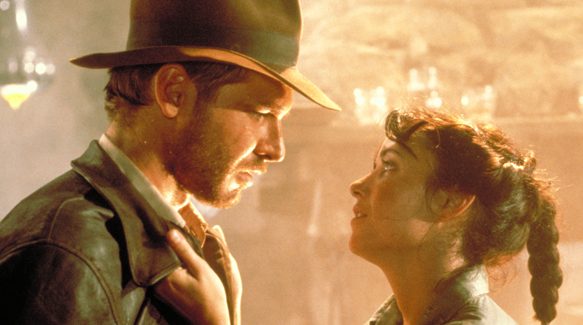 Ford’s co-star, Karen Allen, went on to work with Jeff Bridges in 1984’s Starman and with Bill Murray in 1988’s Scrooged, before reprising her role as Marion in 2008’s Indiana Jones and the Kingdom of the Crystal Skull. The role of Marion was originally read by actress Sean Young when actors were auditioning for the role of Jones. Not getting the part, Young, however, ended up starring alongside Ford later on in the 1982 Sci-Fi epic Bladerunner.

As for John Rhys-Davies, well he may be in just about every Science Fiction/Fantasy based movie and television show ever. Widely known for his portrayal of dwarf Gimli in Peter Jackson’s The Lord of the Rings Trilogy, where he also voiced the Ent Treebeard, he can be seen now on MTV’s 2016 series The Shannara Chronicles where he plays Eventine Elessedil.

Not mentioned above is the role of Jones’ confidant and Museum Curator Marcus Brody (Denholm Elliott: Trading Places 1983, A Room With a View 1985), who buys Jones’ finds to place in his museum.  Kind of shady, but a lovable character iconic to the series. Also, uber-Nazi Colonel Dietrich (Wolf Kahler: Barry Lydon 1975, Sherlock Holmes: A Game of Shadows 2011), cohort of Belloq and Toht, plays a large role in the film and dies, via deflated head, at the end of the movie. Alfred Molina is well-known now, but Raiders of the Lost Ark was his first film role. Thankfully, his death at the beginning did not poison his career. Then there is George Harris, who plays Captain Simon Katanga, who went on to portray Kingsley Shacklebolt in three Harry Potter films. Finally, famed Voice Actor Frank Welker voiced the Nazi monkey. For those keeping count, Welker also voiced Abu from 1992’s Aladdin.

Impossible to overlook is the film’s defining soundtrack. Composed by John Williams, the score includes one of the most recognizable themes in all of film history, “Raider’s March.” Williams, of course, is a legend in his own right, but his music for the Indiana Jones films enhanced them so well. In fact, so recognizably, that it can be argued he played a large role in their success. Many could technically argue that about many of his music work in films throughout his career. Nominated for the 1982 Academy Award for Best Original Score for Raiders of the Lost Ark, unfortunately he was beat by Vangelis for 1981’s Chariots of Fire. Fittingly, he would win it the next year for the massively popular 1982 Sci-Fi film E.T. The Extra-Terrestrial.

Undeniably influential, Raiders of the Lost Ark is a film icon, ranking #2 in British publication Empire’s 2008 list of top 500 films ever. The story was meant as a James Bond-ian take on classic Adventure serials of the ’40s and ’50s, with an added dash of Uncle Scrooge comics informing the plot. Despite its over the top series of improbable events, generations have adored it and its subsequent films, a tradition that should continue with a fifth installment confirmed to arrive in 2019. What may be its most important impact, though, is how much attention it has garnered for Archaeology. 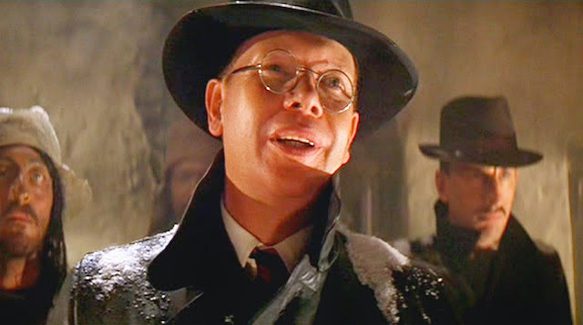 Many archaeologists have argued the pros and cons of the attention. Some think the romanticizing of the field hurts it, giving rise to people who destroy priceless sites and artifacts in their impatience to get the reward—without doing the necessary work to preserve history. They argue that Jones’ methods are not just destructive, but dangerous, and misleading of how archaeologists actually work.

On the other side of the argument, experts welcome the influx of interest in Archaeology, considering it the best PR the field has ever experienced and a chance for many people in the younger generations to develop a love and passion for history. Certainly Zahi Hawass, flamboyant and controversial archaeologist from Egypt, styled himself after Indiana Jones in an effort to push reclamation and restoration efforts in his homeland.

Overall, Raiders of the Lost Ark stands as a testament to the power of the hero’s journey. It reaches that place within all of viewers that longs to play an important role in life, something that leaves our legacy, with the added bonuses of globetrotting and sexy rendezvous.

The character of Indiana Jones grew beyond the bounds of film to embody the very spirit of adventure. Amazingly, Modern Pop culture still references the film and the series retains an amazing amount of interest. Even 35 years after Raiders of the Lost Ark’s initially presentation, it is a film that still packs more punch and promises of a great escape then many of its predecessors. 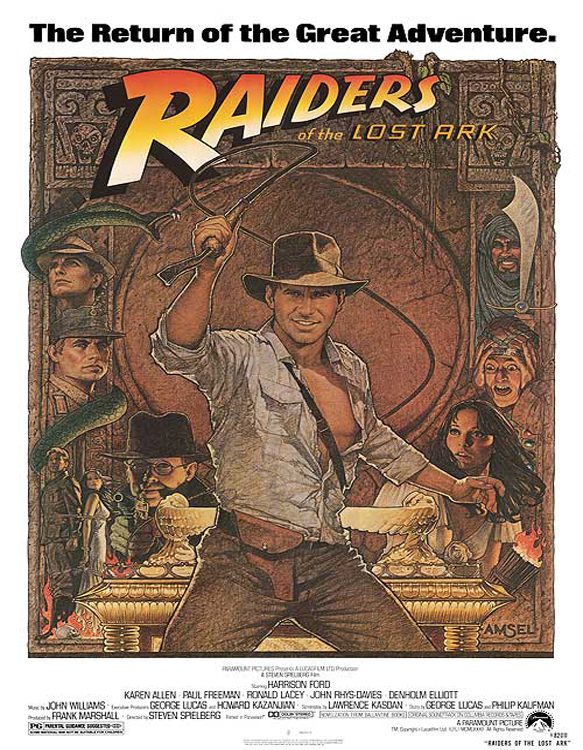