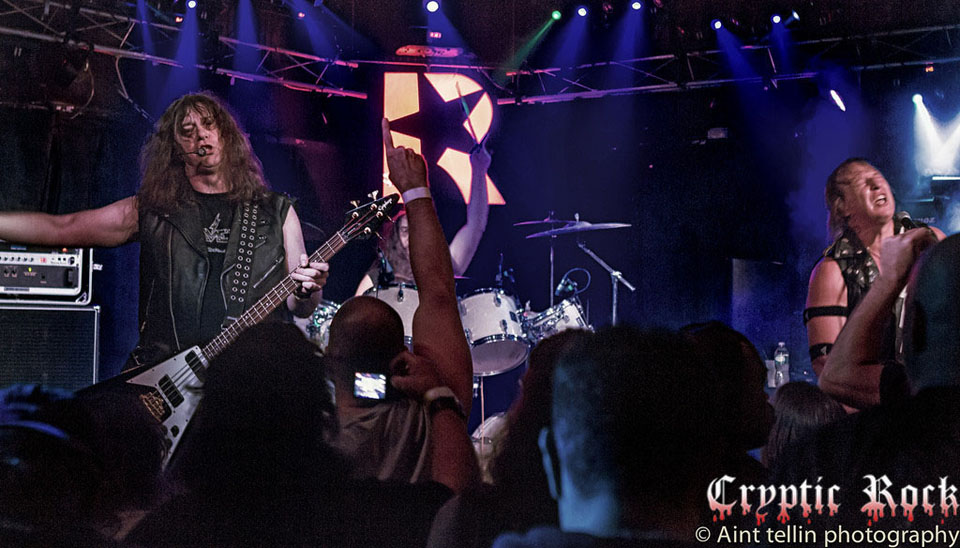 Heavy metal has grown to be one of the most popular genres of music since the 1980’s.  The New Wave of British Heavy Metal  began at the beginning of the 1980’s and spawned some of the most innovative bands of the decade.  We all know and love the household names like Iron Maiden, Judas Priest, Saxon, and Motorhead.  Over the years, unfortunately, casual fans forget some of the other true pioneers of the NWOBH movement.  Band’s like Angel Witch, Diamond Head, Girlschool, Grim Reaper  were also key players in the scene and garnish respect.  At the top of the list of the scene should be Newcastle, England’s band, Raven.  Forming original in 1974 by brothers John Gallagher and Mark Gallagher, and Paul Bowden, the band forged their sound over the years to be unique, energetic and electrifying. Their passion for metal found the Brits touring on the “Kill ’em All For One” tour in 1983 with Metallica in North America. With a strong dedicated following and commercial success, Raven has released 12 studio albums in the past 32 years and toured the world extensively. As if their longevity isn’t impressive enough, the band has also sustained the same line-up since 1987 with John Gallagher (bass/vocals), Mark Gallagher (guitar/vocals), and Joe Hasselvander (drums). On Sunday September 22nd, Raven made an appearance at Revolution in Amityville NY for special night of metal.

A niche and dedicated fan base gathered to watch Raven torch the stage at Revolution. Always known for their energetic live performances, which  are often described as athletic, Raven has not lost any of that testosterone in the last 40 years. With many of their tracks being of a fast speed metal nature with killer guitar riffs and guitar solos, one may wonder if Raven can still pull off these songs live after all these years. Raven put that notion to rest right from the start by blazing through songs at will. Raven still possess the high energy and skill of 20 year old metal musicians.  They jumped around the stage, swung guitars in the air, and put on a spectacular display of raw energy. The Gallagher brothers, along with Hasselvander on drums, have built a well oiled machine of heavy metal speed and fury over the past 3 decades and this performance proved it to all in attendance. They performed a balanced set of songs ranging from their debut album Rock Until You Drop (1981), to recent album Walk Through Fire (2009) . Many bands will tell you that it’s not the size of the crowd, but the energy provided by the crowd. The room at Revolution definitely had that energy on this late Sunday evening show. Fans were all huddled around the stage while throwing up metal horns, head banging, and completely engaged in the performance. Raven is not a band metal enthusiasts should take for granted. The metal scene should feel blessed that these British heavy metal originals still continue to perform and perform at the level they do. The New Wave of British Heavy Metal lives on!