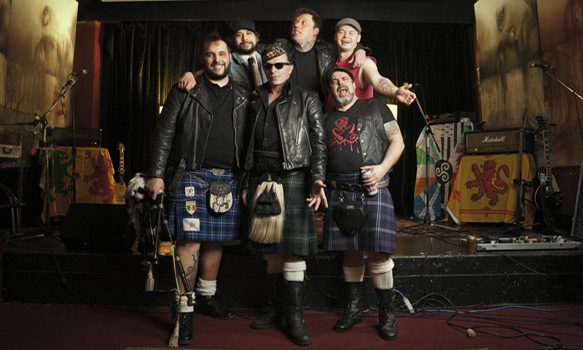 Fuck Flogging Molly! Fuck The Pogues! Fuck The Mahones! Fuck The Irish Rovers! Most of all, fuck The Real McKenzies! Calm down, it is just a song. That stated, there is a lot of fun cussing and funking, as well as a healthy dose of history, going on with The Real McKenzies’ Two Devils Will Talk, arriving Friday, March 3, 2017 via Fat Wreck Chords.

For those who are a little lost, Canada’s The Real McKenzies have been around for over two decades. Founded in 1992 by the Punk Poet Paul McKenzie, the band calls Vancouver, Canada home. McKenzie is the sole remaining original member of the group, and claims to have performed with some 100 different musicians in The Real McKenzies over the years.

No matter the lineup statistics, over the past twenty-five years, The Real McKenzies have produced nine full-length studio albums – from their self-titled, Real McKenzies, in 1995 to 2015’s Rats in the Burlap – and have shared stages with everyone from NOFX, Rancid, Voodoo Glow Skulls, and fellow Celtic Punks Flogging Molly to Metallica, The Misfits, and Shane McGowan, just to name a select few. Their music has appeared in various TV commercials (Kokanee beer, for one), as well as in films, including – but hardly limited to – Stone of Destiny (2008) and Vampires vs. Zombies (2004). It is an impressive, lengthy career for these Canadian treasures.

An intriguing, meandering collection of fourteen tracks that range from the historical to the downright witty, their newest album, Two Devils Will Talk, is ready to bang an (ear)drum. Those who are not already one of the anointed, consider The Real McKenzies to be Flogging Molly meets Shane McGowan, Celtic Punk meets Celtic Folk, with a flair for storytelling and, well, kilts.

Two Devils Will Talk kicks off with an ode to moving forward without looking back, “Due West.” As with many of the album’s tracks, “Weyburn” is fast-paced, full of bagpipes, and references the Canadian town of the same name. Meanwhile, if a Celtic Punk ballad seems possible, then “One Day” could very well be it. “One day I’ll come back to you and take a breath of air / Until then I’ll stay strong and true, and pretend that you’re here,” sings McKenzie in a tale of geographical distance and love.

Much like Ulysses, McKenzie fights the waves in the rollicking “Seafarers,” with its marching drums and lyrical homage to surfing the waves of life as best one can. In fact, many of these tracks contain seafaring imagery, including the superbly catchy stand-outs “Float” and “Sail Again.” They are also largely short tracks that seem to fly past at a frenetic pace: this boat’s a movin’ quickly, folks.

A bewitching cover of Stan Rogers’ “Northwest Passage” is a clear highlight of this collection. A song that pays a lyrical tribute to Captain Sir John Franklin and his contemporaries on the elusive search for the Northwest Passage. McKenzie does some of his best singing as he paints the aural picture: “Ah, for just one time, I would take the Northwest Passage / To find the hand of Franklin reaching for the Beaufort Sea / Tracing one warm line through a land so wild and savage / And make a Northwest Passage to the sea.” More tales are woven through the notes of “The Town” (“As he reached for his whiskey, unaware ’twas his last / his hand shook from the tremble of a faded hourglass”) and the self-explanatory “Drunkards Lament.”

As The Real McKenzies approach their berth, they offer up the most hysterical good time on the record: “Fuck The Real McKenzies.” The Pogues, The Mahones, Flogging Molly, and The Irish Rovers are all name-checked here, but where are the stellar Dropkick Murphys? “Fuck these bands like us,” McKenzie sings humorously. “Fuck us all together or fuck us one by one.” It is admittedly a lot of fucking and, therefore, a fabulously good time. The band end on a special note for die-hards: a reworking of their own “Scots Wha Ha’e” off their eponymous 1995 debut. Still proud to be donning their kilts and claymores (ahem), The Real McKenzies invite all Scots (and Scotts) to raise their hands and rock. McKenzie and co. caber toss themselves to a close, but do stay for a surprising final moment.

The Real McKenzies are a witty, yet poetic group of Canadian storytellers who fall somewhere closer to Folk Punk than what we in America view as modern Celtic Punk. There is, of course, a clear Celtic influence to their music – and bagpipes galore – yet Paul McKenzie is more a weaver of emotional tales than a mohawked street punk. However you categorize it, The Real McKenzies’ Two Devils Will Talk is a fun collection of sea-faring prose, historical voyages, and some Scottish kilt-twirling. It is often boisterous, it is always smart, and CrypticRock gives The Real McKenzies’ Two Devils Will Talk 3.5 out of 5 stars. 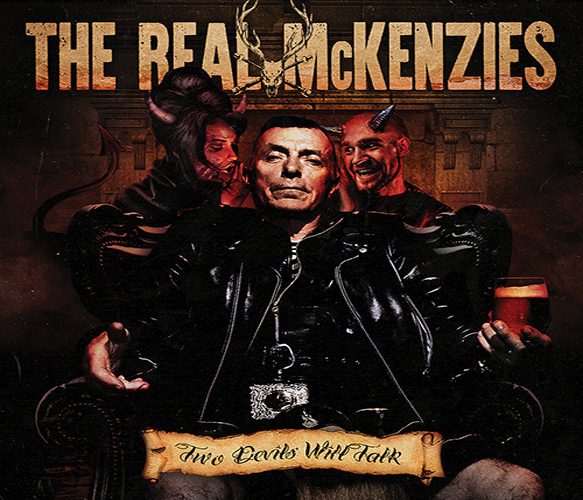